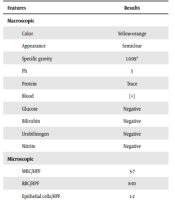 Colistin-Induced Neurotoxicity in a Multidrug-Resistant UTI Patient with Cervical Cancer: A Case Report

There has been a rise in the reappearance of multidrug-resistant Gram-negative bacteria in recent years. Using polymyxins, such as colistin, as a last-line treatment for these infections has led to renewed interest in the toxic effects of this drug.

In this case report, we present neurological signs and symptoms developed in a patient with a history of cervical cancer four to five hours after receiving colistin for treating a urinary tract infection caused by MDR Pseudomonas aeruginosa with a colony count of > 100,000/L. These signs and symptoms included lower limb hemiparesis, facial paresthesia, decreased deep tendon reflexes, and tinnitus, which were resolved on their own 24 hours after discontinuation of the drug. Antibiotic therapy was continued with pipractate and ciprofloxacin instead. The patient got discharged in stable condition after negative urine culture results.

Colistin is classified as a polymyxin antibiotic. It is regarded as a last-line option in treating infections caused by multidrug-resistant Gram-negative bacteria. Infections caused by Pseudomonas aeruginosa, Acinetobacter baumannii, and Klebsiella pneumonia can be treated by this antibiotic. Nephrotoxicity and neurotoxicity have been reported in multiple literature as adverse effects of this antibiotic, with more cases presenting nephrotoxicity compared to the latter (1-3). Colistin-induced neurotoxicity is reported to be related to drug dosage and infusion speed. The signs and symptoms of this side effect include apathy, ataxia, myopathy, muscular weakness, polymyoneuropathy, facial and peripheral paresthesia, and even neuromuscular blockade (2). Compared to the nephrotoxic signs, colistin-induced neurotoxicity is reported to be usually mild and resolvable after immediate discontinuation of the drug responsible for them (4). In this study, we present a case of neurotoxicity caused by the intravenous administration of colistin.

A 60-year-old woman with a past medical history of cervical cancer who underwent chemotherapy and radiotherapy presented with fever, decreased urinary output, dysuria, increased creatinine levels (Cr: 1.9 mg/dL), and decreased appetite. She developed chronic post-renal obstructive disease with recurrent urinary tract infection (UTI) after the radiotherapy period. The patient is also reported suffering from hypothyroidism and using levothyroxine for treatment. On examination, her pulse rate was 72 bpm, with a blood pressure of 110/70 mmHg, a temperature of 37.8°C, and a respiratory rate of 19/min. Physical examination revealed pale conjunctions; however, no other abnormal signs and symptoms were found. CBC and electrolyte levels were tested and found to be within normal limits. The urinalysis results reported that the urine color was yellow with a white blood cell count of 8 - 10 × 109/L and a red blood cell count of 1 - 3 million/mm3, and a rare presentation of bacteria in the urine. Sonographic findings showed that the size of the right kidney was 12 mm, and a parenchyma width of 13 mm was reported, along with moderate hydronephrosis. Also, the size of the left kidney was 93 mm. Moreover, a parenchyma width of 12 mm and mild hydronephrosis were reported. Urine culture results demonstrated the presence of P. aeruginosa with a colony count of > 100,000/L. The bacteria were resistant to all antibiotics, including ceftazidime, ciprofloxacin, imipenem, meropenem, gentamicin, etc., except for colistin (Table 1). The obtained allergy history stated that the patient was allergic to penicillin and fluoxetine. Based on this information, 2.5 mg of intravenous colistin was ordered to be administered twice daily. Four to 5 hours after starting this antibiotic, lower limb monoparesis, facial paresthesia, decreased deep tendon reflexes, and tinnitus were noted. Decreased mental status was not witnessed, and GCS was 15/15. According to this condition, colistin was stopped immediately. Antibiotic therapy was continued by replacing colistin with intravenous piperacillin/tazobactam (pipractam) and ciprofloxacin. Twenty-four hours after stopping the administration of colistin, all of the neurological signs and symptoms were resolved. Since these neurological characteristics were resolved on their own after discontinuation of the drug, colistin-induced neurotoxicity was diagnosed as the cause, and brain MRI was no longer performed for the patient. The alternative medications were continued for one week. After completing the one-week treatment period, urinalysis and urine cultures were repeated. All urinalysis parameters were within the normal range, and the culture results were negative (Table 2). The patient got discharged in stable condition and with an order of 250 mg ciprofloxacin tablets twice daily.

Colistin is one of the five polymyxin antimicrobial compounds derived from the soil bacterium Paenibacillus polymyxa (formerly known as Bacillus polymyxa) (5). Its bactericidal effect disrupts cell permeability by displacing the divalent cations magnesium and calcium, stabilizing anionic lipopolysaccharide molecules in the outer membrane of Gram-negative bacteria (6). Colistin sulfate and colistimethate sodium are two forms of colistin available in the market. The former can be administered topically, while the latter is administered parenterally. However, both forms can be inhaled (4).

Colistin was first used in Japan and Europe as an intravenous formulation in the 1950s. Later, in 1959, the US FDA approved it as an antimicrobial agent against Gram-negative bacteria for treating different infections, including infectious diarrhea and UTIs. However, due to the reported adverse effects of polymyxins, mainly nephrotoxicity and neurotoxicity, the clinical use of this drug was largely abandoned by the 1970s. The re-emergence of extensively drug-resistant (XDR) Gram-negative superbugs, such as P. aeruginosa, A. baumannii, and K. pneumonia, in the 1990s led to the rise in using polymyxins such as colistin as a last defense against the mentioned bacteria. Infections caused by these micro-organisms were resistant to all other available antibiotics (7). In recent years, intravenous colistin, especially colistin methasulfate, has been used to treat P. aeruginosa and A. baumannii infections such as pneumonia, UTIs, and septicemia (6).

As stated before, using colistin in the drug regime of patients can have some side effects. This drug can have dermatologic adverse effects such as pruritus, skin rash, and urticarial, respiratory effects such as apnea and respiratory distress, and some effects on the gastrointestinal system in the form of clostridioides difficile-associated diarrhea and gastric distress. Moreover, its toxic effects can be seen as acute renal failure with decreased creatinine clearance, increased blood urea nitrogen, and increased serum creatinine. Fever can also be seen in some patients undergoing colistin antibiotic therapy. Since this drug can have toxic effects on the central nervous system in the form of transient reversible neurological disturbances such as dizziness, numbness, paresthesia, slurred speech, tingling, and vertigo, patients should be cautious about performing tasks that need mental alertness. Among these, nephrotoxicity and neurotoxicity are two of the adverse drug reactions of colistin that are commonly mentioned. Even though there have been many case reports on this drug’s nephrotoxic effects, the number of case reports about its neurotoxicity is comparatively low. The incidence rate of neurotoxicity caused by colistin ranges from 0% to 7%. This further indicates that neurotoxicity is a rare side effect compared to colistin-induced nephrotoxicity (8).

In our case, a 60-year-old woman with cervical cancer started antibiotic therapy with colistin due to a diagnosis of UTI. To our knowledge, this is the first case of colistin-induced neurotoxicity reported in a patient with a history of cervical cancer.

The mechanism which causes neurotoxicity can be explained by colistin’s preventive effects on releasing acetylcholine into the synaptic gap (9). This influence leads to a range of neurotoxic side effects, including apathy, ataxia, myopathy, muscular weakness, polymyoneuropathy, facial and peripheral paresthesia, seizures, visual disturbances, vertigo, delirium, myasthenia and neuromuscular deficits, and apnea (2, 10, 11). Initially, no signs and symptoms of central and peripheral nervous system impairment were present in our patient. However, lower limb monoparesis, facial paresthesia, decreased deep tendon reflexes, and tinnitus that presented in our patient after administration of colistin falls under the neurotoxic category of signs and symptoms.

Long duration of therapy, increased dose, infusion speed, hypoxia, female sex, and renal dysfunction such as acute kidney injury (AKI) and chronic kidney disease (CKD), as well as the use of sedatives, anesthetics, muscle relaxants, narcotics, or corticosteroids, are considered to be some risk factors of neurotoxicity explored in previous studies (1, 2, 11). Our patient was not receiving any other medication, which can cause similar adverse effects such as nephrotoxicity and neurotoxicity. Furthermore, it should be noted that despite the slow infusion speed while administering this drug, neurotoxic signs and symptoms still appeared.

It is stated that dose reduction of this drug may help in reducing neurologic symptoms. Furthermore, other studies reported that colistin-mediated neurotoxicity is usually mild, and the recovery happens in up to 72 hours (1, 12). In our case, the complete recovery process happened within 24 hours after discontinuing therapy with colistin, which also aligns with this fact.

There is a rise in the appearance of multidrug-resistant Gram-negative bacteria. Using polymyxins such as colistin as a last-line treatment for infections caused by these organisms has also risen. Hence, colistin-mediated neurotoxicity should be one of the possible diagnoses in patients developing neurological signs and symptoms in the treatment process with this medication. Clinicians must be aware of adverse effects, such as nephrotoxicity and neurotoxicity, which come with this antibiotic therapy. They should also be educated on contributing factors such as drug dosage, the presence of renal disease, and drug-drug interactions that can play a role in these side effects. Patients receiving colistin should have regular reviews for renal function, mental status, and neurological assessments. If the patient develops neurotoxicity, immediate dose reduction or discontinuation of colistin is advised to prevent any fatal consequences.

We would like to thank all the medical professionals who cared for the patient and the laboratory members.

Copyright © 2022, Author(s). This is an open-access article distributed under the terms of the Creative Commons Attribution-NonCommercial 4.0 International License (http://creativecommons.org/licenses/by-nc/4.0/) which permits copy and redistribute the material just in noncommercial usages, provided the original work is properly cited.
download pdf 95.12 KB Get Permission (article level) Import into EndNote Import into BibTex
Number of Comments: 0