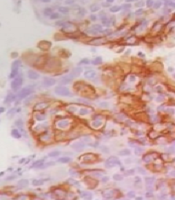 Renal cell carcinoma (RCC) is an invasive malignancy of kidney origin. The programmed death-1 ligand (PD-L1) with its receptor (PD-1) on T-cells can inactivate antitumor response and possibly lead to poor outcomes in patients with RCC.

Our study assessed the expression of PD-L1 by immunohistochemical staining on 86 radical or partial nephrectomy samples with RCC diagnoses with diverse types, tumor grades, and stages. Tumor specimens were collected from the pathology archive of 2014 - 2017 in Sina Hospital, Tehran, Iran.

According to our findings, PD-L1 could be regarded as an important biomarker with worse prognosis and aggressive clinicopathologic findings in patients with RCC.

Renal cell carcinoma (RCC) is the sixth most common malignancy in men and the eighth in women in the United States (1). RCC originates from the kidney, which often exists with only some symptoms and different paraneoplastic syndromes. RCC has relative resistance to radiation and chemotherapy. However, the newest study on the genetic alterations associated with RCC has revealed new targets for supplementary therapies (2). Some biochemical markers are considered sensitive and specific in patients with RCC for prognosis evaluation (3). One of the ways of immune escape from tumorogenesis is the programmed death-ligand 1 (PD-L1) expression on neoplastic cells. PD-L1 binds to its receptor, PD-1, on T cells that inactivates antitumor T-cells (4). PD-1, which binds PD-L1, is active in several tumor types, including the lung, ovary, colon, breast, liver, head and neck, kidney, bladder, and melanoma (5). PD-L1 is a protein acting as a negative manager of the antitumor T cell-mediated immune reaction while binding to its receptor. However, the prognostic significance of the expression of PD-L1 in RCC has been debated (6). Meanwhile, PD-L1 is expressed on neoplastic cells and antigen-presenting cells but not in normal human cells. Current reports display that the expression of PD-L1 in RCC is considered by invasive findings and poor prognosis (7). Furthermore, some treatments are accessible for limited RCC, with the most effective being surgery followed by chemotherapy and radiotherapy. RCCs unsuitable for surgery or distant metastasis are regularly treated with specific molecular targeted agents or immune checkpoint blockade for systemic immune therapy (8). Anti-PD-L1 can blockade immune checkpoints, reduce tumor volume, and raise overall RCC survival (9). Therefore, anti-PD-L1 has been agreed upon as a new treatment approach for RCC. Even though the clinical administration of anti-PD-L1 develops promptly, the patterns of PD-L1 expression in diverse tumors are still moderately described, and the predictive and prognostic value of PD-L1 is still a problematic consideration (10). Scholarships about the prognostic worth of PD-L1 are relatively insufficient in RCC, and the consequences are not entirely reliable.

Consequently, we investigated the clinicopathological and prognostic significance of PD-L1 in RCC in the Iranian population. Evaluation of PD-L1 expression may be highly beneficial in demonstrating a high-risk population of RCC patients with poor prognoses.

This cross-sectional study evaluated 86 specimens from the archive of the Pathology Department of Sina Hospital in Tehran, Iran, with RCC who had radical or partial nephrectomy during 2014 - 2017. All specimens had the following information registered: age, gender, tumor size, tumor type, tumor stage, tumor grade, necrosis, sarcomatoid differentiation, and lymph vascular invasion. Moreover, paraffin-embedded samples from formalin-fixed renal tumors for immunohistochemistry (IHC) staining was available. The duration of follow-up was considered from the time of the first surgery to 12 months after surgery or the time of expiry. Therefore, all patients were evaluated for recurrence or distant metastasis after 12 months from surgery. The exclusion criteria were patients with incomplete data. Tumor staging was performed according to the College of American Pathologists. In addition, Tumor grading was completed according to the WHO/IUSP grade algorithm (11).

The archive of the Department of Pathology of Sina Hospital had tumor blocks from all patients. Two expert pathologists evaluated Hematoxylin and Eosin (H&E) slides from tumors to detect and confirm the best blocks for IHC staining. IHC staining was performed on 4 μm paraffin-embedded slides to evaluate the rate of PD-L1 expression. PDL-1 expression was assessed using a rabbit monoclonal anti-PD-L1 antibody (1:100 dilutions, clone CAL10, BIOCARE, Netherlands). Paraffin blocks were cut and deparaffinized by Xylene and a sequence of diminishing concentrations of ethanol rehydration. Afterward, antigen retrieval was reached in cell conditioning solution CC1 (pH 8.5, 98°C; Ventana Medical Systems) for 60 min and was cooled at room temperature (25°C) for 30 min. Slides were exposed to 3% H2O2 in methanol for 10 min to inhibit peroxidase.

Next, slides were exposed to monoclonal antibodies and labeled by envision detection system (DAKO). Color staining was performed by 3, 3’-diaminobenzidine, tetrahydrochloride (DAB plus; DAKO Glostrup, Denmark). The tonsil gland was used as PD-L1-positive control. Negative controls were prepared by replacing the primary antibody with PBS and nonimmune rabbit serum. The expression of PD-L1 was assessed based on the percentage of staining as 0% - 5% expression was considered negative, and > 5% expression was positive in the membranes of tumor cells (7) (Figure 1).

All analyses were completed using the statistical package of social science software (SPSS, IBM, USA) version 21, and P-value ≤ 0.05 was considered statistically significant. Categorical variables were reported as a percentage (%), and continuous data were reported as mean ± standard deviation (SD). Depending on the nature of variables, chi-square, Fisher’s exact test, Mann-Whitney U test, or independent t-test were performed to evaluate tumor specifications and the subsequent subgroups of positive or negative PD-L1expression. Kaplan-Meier predicted survival times, with subgroups being compared using the log-rank test.

Moreover, after 12 months of follow-up, Kaplan-Meier analysis indicated significant differences in disease-free survival of tumors between the groups with or without PD-L1 staining. There was a significant relationship between disease-free survival and PD-L1 staining (P = 0.032. Patients with better outcomes, including no recurrence or metastasis after 12 months from the date of primary tumor surgery, had no staining on the primary tumor (Table 2).

RCC is a distinct malignancy with diverse pathologic findings and various molecular pathways, which critically alter clinical management (12). PD‐L1 is the only member of the B7 family of immune-regulatory ligands and may increase by hypoxia. The expression of PD‐L1 described in RCC greatly deregulates the hypoxia-induced factor (HIF) axis. Stabilization of HIF through the loss of Von Hippel-Lindau is a symbol of this tumor type, consequently, act in pseudo hypoxic situations in the more significant part of RCCs (13). In addition, positive PD-L1 staining on the membranes of tumor cells was related to aggressive clinicopathological findings (14). Thompson et al. reported that in RCCs, the clearest cell RCCs had PD-L1 expressions, and tumors with elevated expressions had a poorer prognosis. Moreover, intra-tumoral lymphocytes (ITL) in RCCs had PD-L1 expression and elevated expressions in tumor cells or ITLs accompanied by progressive disease, poor prognosis, and distant metastasis (15). The PD-L1 expression in clear cell RCCs is higher than in non-clear cell RCCs (1). However, our study showed that non-clear cell RCCs had higher PD-L1 expression than clear cell RCCs. Walter et al. indicated that in the subtypes of RCC, high PD-L1 expression was found in the aggressive types, such as papillary type 1, chromophobe, hybrid, and MiT family translocation tumors (16), which is similar to our findings. Moreover, Choueiri et al. observed similar results by a multivariable analysis revealing that the expression of PD-L1 in non-clear cell RCCs was heterogeneous and influenced by tumor stage and tumor type, being important consequence convertors for the relationship of positive PD-L1 staining with clinical outcome (17). As previously described for clear cell RCCs, PD‐L1 expression was related to poor predictive factors, such as tumor stage, tumor grade, and sarcomatoid differentiation component (18). In our series, PD‐L1 expression had relationships with ISUP nuclear grade and necrosis. Therefore, the expression of PD-L1 has been interrelated with poor clinical outcomes in RCC. The incidence of sarcomatoid differentiation in RCC is concomitant with its invasive nature, but RCC with sarcomatoid differentiation may define PD-L1 at an upper proportion than RCC with no sarcomatoid differentiation. In a study by Xu et al., it was described that increased PD-L1 was considerably related to large tumor size, high stage, poor nuclear grade, and tumor necrosis in patients with RCC (19). Nevertheless, our study observed exclusively relationships with nuclear grade and necrosis. On the other hand, Pyo et al. reported that PD-L1 expression shown by IHC was considerably correlated with worse disease-free survival rates (20), which was similar to our study. The rate of PD-L1 expression was different in clear cell RCC patients in prior studies, which may be attributed to the dissimilarities in types of received tissue (fresh for frozen study or formalin-fixed), antibodies used for IHC, and analysis criteria with variable cut-off values (21). Previous studies measured the degree of PD-L1 expression for defining the cut-off value. Moreover, we evaluated the proportion of PD-L1-positive staining on tumor cells to agree with the cut-off for the positivity of PD-L1. As a result, the elevated expression of PD-L1 in neoplastic tissues was hypothetically related to the highly histological grade of malignancy in RCC. In addition, a probable predictive potential has been reflected for PD-L1 and has encouraged novel medicine development to block PD-L1 (22). The PD-L1 evaluation may help predict the ability of antitumor immune therapy by using immune checkpoint inhibitors. To identify patients who would profit from immunotherapy, subgroups of tumors expressing these items need to be detected (23). The current research described the relationship of PD‐L1 expression with IHC, pathological criteria, and disease-free survival.

Assessment of PD-L1 expression by IHC was established as a favorable marker in clinical judgments, but with several considerations (different antibodies, tumor heterogeneity, type of specimens, and various thresholds of positivity). PD-L1 expression predicts poor prognosis in RCC. Furthermore, PD-L1 pathway-targeted immunotherapy may be beneficial for managing patients with RCC.

Copyright © 2022, Author(s). This is an open-access article distributed under the terms of the Creative Commons Attribution-NonCommercial 4.0 International License (http://creativecommons.org/licenses/by-nc/4.0/) which permits copy and redistribute the material just in noncommercial usages, provided the original work is properly cited.
download pdf 2.10 MB Get Permission (article level) Import into EndNote Import into BibTex
Number of Comments: 0