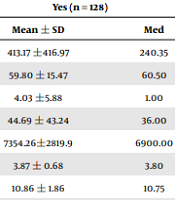 Association Between Uremic Pruritus and Serum Level of Fibroblast Growth Factor 23 in Hemodialysis Patients in North of Iran: An Observational Study

Chronic itch (CI) in hemodialysis (HD), also called uremic pruritus (UP), is a common, distressing, and unpleasant symptom. Fibroblast growth factor 23 (FGF23) is a bone-secreted phosphaturic factor. Several bone diseases can accompany kidney diseases. It is unclear whether the common disturbance of calcium/phosphate homeostasis can cause CI in chronic kidney disease.

This study investigated the association between FGF23 and UP among HD patients in northern Iran.

Patients undergoing maintenance HD at four referral medical centers were recruited in this cross-sectional survey. The enzyme-linked immunosorbent assay was used to evaluate serum FGF23 levels. An interview questionnaire was used to analyze the various aspects of pruritus.

There was no linear correlation between FGF23 and UP in this study.

Uremic pruritus (UP) is a frequently experienced, tormenting, and challenging problem in advanced or end-stage renal disease (1). There has been an ongoing debate regarding if UP in chronic renal disease (CDK) is caused by the common disturbance of calcium/phosphate homeostasis (2, 3). Recently, a vicious circle of metabolic derangements, including malnourishment, inflammation, and arteriosclerosis, has been proposed that may clarify the overwhelming morbidity and mortality in hemodialysis (HD) patients. Among other factors contributing to UP in HD, inflammation sounds the most deleterious (4, 5). Fibroblast growth factor 23 (FGF23) is a key player in regulating calcium/phosphate. It has been revealed that high levels of FGF23 have been linked to increased inflammation, morbidity, and mortality in those with CDK (6).

In the present study, we investigated the prevalence of UP among HD patients. We assessed serum FGF23 levels and other demographic and biochemical parameters. We tried to find the factors potentially influencing the FGF23 level in HD patients.

This analytical observational multicenter study was performed between May and November 2018. The institutional review board of Guilan University of Medical Sciences approved the study protocol. All the participants gave their informed consent. The inclusion criteria included all HD patients aged over 18 years admitted to four dialysis centers in Guilan province. Those HD patients with primary pruritic skin lesions, infectious cutaneous disorders such as scabies, inflammatory skin disorders like atopic dermatitis, lichen planus, prurigo nodularis, and neoplastic skin diseases such as mycosis fungoides were excluded from the study. Those suspected of senile xerosis were treated with emollients and reevaluated one month later. The patients were asked for chronic itch (duration above six weeks). The characteristic of itch was defined as at least three episodes of itch during two weeks or less, the itch happening several times a day and lasting for more than five minutes, and annoying (7). Then, the patients were categorized into two groups with and without UP. The dialysis sessions and hours were adjusted according to the patient’s residual kidney function. Most of them were dialyzed 2 - 3 times a week. None of the individuals had received ultraviolet (UV) phototherapy within six months preceding the research. A single dermatologist conducted a thorough physical examination of all UP patients. Those suffering from UP were requested to score the severity of their present itch based on a visual analog scale (VAS). The VAS spans from 0 for no itch to 10 for the most severe imaginable itch (8). The different characteristics of pruritus were asked in a precise interview. The same dermatologist gathered data and evaluated the inclusion and exclusion criteria.

In both groups, 10 mL of blood was taken after a long dialysis-free weekend immediately before starting HD. In addition to the routine laboratory measurements, we also assessed FGF23, 25-hydroxyvitamin D3 (25[OH] D3), albumin, calcium, phosphate, and C-reactive protein (hsCRP).

SPSS version 20.0 software was used for statistical analysis. The frequency, median, and means ± standard deviation (SD) were reported using descriptive statistics. The non-parametric Mann-Whitney U test or the χ2-test (for nominal variables) was used to examine differences between patients with and without UP. Pearson’s univariate correlation analysis, followed by stepwise and multiple linear regression approaches, was utilized to discover the correlations. P-values of less than 0.05 were considered statistically significant.

Table 1. Comparison of Quantitative Variables Among Two Groups with and Without Uremic Pruritus

There were no differences between the two groups regarding their end-stage renal disease (ESRD) etiology. Of note, hyperlipidemia patients were more non-UP than UP; however, this difference was not statistically significant (n = 11 vs. n = 5, P = 0.07). The mean level of FGF23 was higher in urban than rural patients (P = 0.002). Comparing UP and non-UP groups showed that the difference was only within the UP group (0.004), and non-UP patients had no difference in this regard (P = 0.143) (Table 2). Spearman correlation showed that among 237 participants, FGF23 levels had a negative correlation with age and positive correlations with dialysis duration and serum creatinine (P < 0.05). We detected a borderline correlation between FGF23 and PTH levels (P = 0.085). This correlation was only among the UP subgroup (P < 0.05).

Table 2. Comparison of FGF23 Levels by Qualitative Variables in Two Groups with and Without Uremic Pruritus a

Table 3 . Correlation of FGF23 with Quantitative Variables in the General Uremic Population of Study and Groups with and Without Uremic Pruritus

Among demographic factors, sex, smoking, and occupation had no relationship with FGF23 levels.

The results of our study demonstrated that HD patients experienced a moderate itch, which may, to some extent, clarify why UP is underestimated among HD patients. The pathophysiology of pruritus in ESRD is poorly identified. Based on several observational and clinical trials, there are rising data that UP is a systemic rather than an isolated cutaneous disorder (4, 9). It is assumed to be due to the imbalance of Th1 cytokines and the presence of a proinflammatory state. Also, the C-reactive protein level is much higher in ESRD patients. Kimmel et al. found that HD patients had a prominent increased level of IL-6 and Th1 cytokines (4). Peripheral neuropathy is common in ESRD. One hypothesis is that the itch in ESRD could be related to neuropathy. However, other studies do not support it.

Many other pathways were postulated in the pathophysiology of ESRD pruritus. Another possible reason for ESRD itch was the inadequate removal of medium molecular weight uremic toxins (10). Recently, it was found that the removal of small molecular toxins with greater efficiency by standard assessment of Kt/V was related to ESRD itch (3).

The main strength of our investigation is that, to the best of our knowledge, this is the first study to evaluate a large HD population regarding FGF23 levels and UP. Previously, a letter evaluated 18 cases of UP and could not find any association between UP and FGF23 levels (11). The small number of cases in that study was a notable limitation. Other studies evaluated FGF23 in CKD patients.

FGF23, a novel disease biomarker in nephrology, is a significant player in regulating calcium, phosphate, and mineral bone homeostasis (12, 13). FGF23 is constructed and secreted in bone by osteocytes. However, the primary target tissues are the distal nephron and the parathyroid gland. The FGF23 receptor complex consists of two components of FGF receptor 1c (FGFR1c) and membrane-bound αKlotho, both expressed in target tissues (14-16). When FGF23 binds to its receptor, signal transduction occurs in the cytoplasm by activating tyrosine kinases 9 - 11. FGF23 regulates phosphate reabsorption in the kidney, PTH secretion, and vitamin D metabolism.

Remarkably, epidemiological studies in both the general population and patients with kidney disease demonstrated an association of FGF23 with significant medical results related to inflammation, cardiovascular disease, and mortality (17-19). The association between FGF23 and mortality enrolled patients on dialysis; FGF23 was unlikely to impact tubular function in that population, indicating another mechanism of action14.

In our study, the mean vitamin D level was 33.82 ± 17.06, and the median FGF23 level was 412.09 ± 428.93. Obviously, the balance was distorted in our HD patients. The increased FGF23 level and phosphate secretion were expected since the kidneys’ filtration function was decreased.

PTH secretion is also influenced by FGF23 (20, 21). In CKD, the role of constantly increasing FGF23 levels in the progression of hyperparathyroidism opens a discussion. The FGF receptor is down-regulated in the parathyroid gland in uremic situations, thus bringing to mind FGF23 resistance (22).

Our study showed no significant difference between the two groups of HD patients regarding serum-calcium, serum-phosphate, and 25(OH) D3 values (11, 23).

In our study, FGF23 levels were not significantly different between patients with and without UP and did not show any association with pruritus in HD patients. Thus, the role of this protein in the pathogenesis of UP in HD remains questionable.

Notably, epidemiological research found a statistically significant relationship between FGF23 levels and C-reactive protein (CRP) and IL-6 levels in CKD patients (24). The fact that inflammation is a significant inducer of FGF23 release from bone cells may help to explain the previously reported association (25-27).

In our study, HD patients with UP did not exhibit significantly higher CRP levels than those without UP. This is in line with other observational studies (23). But, some previous experimental studies did not find such associations (4, 5, 11). More research is needed to identify whether inflammation is a cause of persistent pruritus in hemodialysis patients and determine the specific involved pathways.

Concerning the present study’s limitations, we did not evaluate FGF23 levels at the beginning and end of one dialysis session for each patient. We could not assess the changes in PTH, calcitriol, and other minerals. In this study, residual kidney function was also not evaluated due to the administration limitations and the lack of cooperation of patients for 24-hour urine collection. The level of cooperation of patients could be a limitation.

In conclusion, UP needs serious attention because of its increasing frequency and subsequent burden. This study found no linear correlation between UP and FGF23 levels.

Copyright © 2022, Author(s). This is an open-access article distributed under the terms of the Creative Commons Attribution-NonCommercial 4.0 International License (http://creativecommons.org/licenses/by-nc/4.0/) which permits copy and redistribute the material just in noncommercial usages, provided the original work is properly cited.
download pdf 139.19 KB Get Permission (article level) Import into EndNote Import into BibTex
Number of Comments: 0