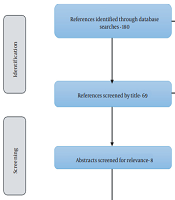 Prevention of Hyponatremia After Transsphenoidal Surgery: A Systematic Review

Pituitary adenomas are amongst the most common tumors with a low mortality rate compared to other intracranial malignancies. Delayed hyponatremia (DH) is a common finding after transsphenoidal resection (TSS), which is the basis for the management of these tumors. Although DH is one of the leading causes of readmission after TSS, no unified guidelines exist with regard to the prevention of this electrolyte disturbance.

This study aims to evaluate and compare existing preventive protocols for DH in order to identify and signify their common grounds.

After a search in electronic databases, including PubMed (NCBI), Embase, Scopus, and Google Scholar with the keywords of “pituitary adenoma,” “hyponatremia,” “transsphenoid surgery”, “water electrolyte balance,” “patient readmission", six original articles were included in the study.

We found that a protocol that both identifies groups susceptible to DH (males, older individuals, and those with a lower BMI) and consists of fluid restriction, sodium supplementation, and regular serum sodium monitoring could be utilized to prevent DH in patients with pituitary adenomas after TSS.

Further studies with a larger sample size must be conducted to compare existing protocols for preventing DH and also investigate post-surgery optimal fluid-restricted diets and corticosteroid therapy in these patients.

Pituitary micro-and macro-adenomas are among relatively common benign intracranial tumors with low mortality and good prognosis (1, 2). The majority of these tumors are managed by transsphenoidal resection (TSS) (3, 4). Since the pituitary gland is responsible for the secretion of antidiuretic hormone (ADH), a hormone responsible for water retention, these patients are expected to develop water and electrolyte imbalances before and after TSS.

The most common electrolyte disturbance seen in patients who undergo endoscopic or microscopic TSS is postoperative delayed hyponatremia (DH) (5). This type of electrolyte imbalance is usually seen 4 - 7 days after TSS and is one of the leading causes of secondary admission to hospitals, which can possibly be life-threatening (6, 7). Various underlying mechanisms contribute to the occurrence of DH, including the syndrome of inappropriate antidiuretic hormone (SIADH), adrenal insufficiency, hypothyroidism, and exogenous desmopressin; however, postoperative DH can be attributed to neurohypophysial trauma as well (8).

The management of postoperative DH is primarily supportive and based on fluid restriction. Also, various preoperative and postoperative prophylactic measures can be taken in order to stabilize the hemodynamic status and serum Na+ concentration to prevent hospital readmission in the weeks following the surgery (9).

Unfortunately, while DH is a common finding, researchers have yet to reach an agreement on the guidelines for postoperative TSS management. Although the efforts reached a consensus on fluid restriction as the cornerstone of the management of these patients, inconsistencies still exist in the literature regarding the amount, duration, and other parameters of fluid therapy in TSS patients.

Given the vital role of hyponatremia in the management of these patients, there is a necessity to evaluate available evidence systematically and methodologically to determine the incidence of hyponatremia after trans-sphenoid surgery in patients with pituitary adenoma.

The aim of this review was to systematically and methodologically assess relevant clinical studies to explore the measures used to prevent hyponatremia and subsequent hospital readmission following water restriction.

The electronic databases of PubMed (NCBI), Embase, Scopus, and Google Scholar were selected as primary sources for the literature search. The keywords included “pituitary adenoma,” “hyponatremia,” “transsphenoid surgery, “water electrolyte balance,” “patient readmission,” and “water restriction”. Articles published in English from 2010 onward were included in this study. Two independent reviewers (MK and RG) screened the titles and abstracts of the articles obtained to determine the eligibility of the studies. The studies, including non-human subjects, review articles, case reports, editorials, letters, and comments, were excluded from the meta-analysis.

The search strategy yielded 180 potentially eligible articles. After removing duplicates utilizing Endnote v. 7, 69 studies remained, which were further screened for relevancy. Afterward, the full texts of eight relevant studies were screened, 2 of which were excluded. Finally, manual searching was performed, and when no additional studies were retrieved, the final six studies with a total of 1972 patients were included in the systematic review (Figure 1). 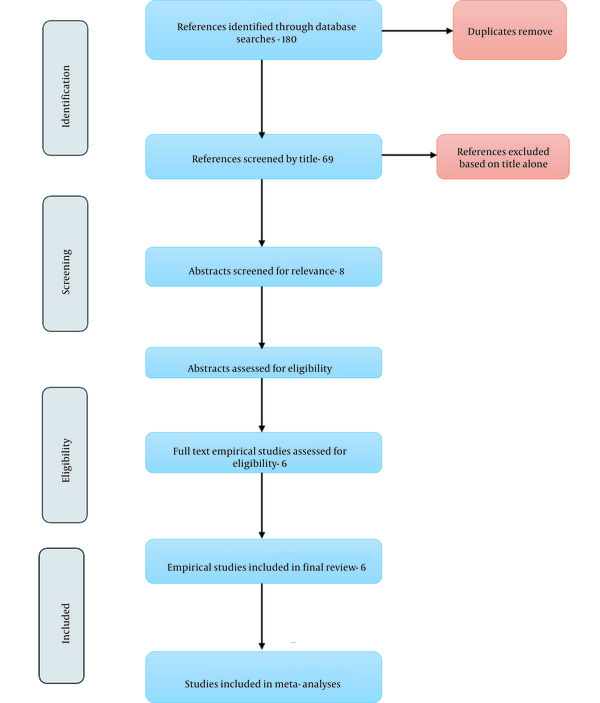 The flow chart of the study

In a retrospective study, Kinoshita et al. evaluated postoperative management of hyponatremia in patients with pituitary adenoma under a unified protocol based on corticosteroid infusion (betamethasone; 2 mg at preoperative, postoperative, and on day 1 and 1 mg on day 2) and reported the incidence and risk factors of DH. In this study, 88 patients were assessed, of whom three patients with ACTH-secreting tumors were excluded. Hyponatremia was defined as serum sodium equal to or lower than 135 mEq/L. In this study, the postoperative incidence of hyponatremia was 30.7% (mean: serum sodium = 131.0 ± 3.9 mEq/L, range: 131 - 135; n = 17; Na+ ≤ 130: n = 10). It was observed that a decrease in serum sodium of more than ten mEq/L and an age older than 60 years were associated with a higher risk of DH development (10) (Table 1).

In an investigation by Takeuchi et al. on 185 patients, the amount of fluid consumption in the case group (n = 93) was limited to 2.5 liters for one week post-operatively. They observed that the rate of hyponatremia significantly reduced in patients who were on a water-restricted diet (5.4% vs. 16.3%, P = 0.017). However, this study did not directly evaluate hospital readmission rates or serum sodium data (11) (Table 1).

Burke et al. investigated the effects of restricted consumption of drinking water (1 Lit/per day for one week after TSS). In this case-control study, it was observed that, in comparison with the control group, the readmission rate and electrolyte imbalance were significantly lower in the case group (P = 0.003). In the recent study, the groups were well-matched in terms of the size and type of tumors, except for LH staining tumors (luteinizing hormone expressing tumors) (14) (Table 1).

Similarly, Deaver et al., in a case-control study on 295 patients, evaluated the effects of postoperative fluid restriction on hyponatremia incidence. The two groups were matched for baseline characteristics, including age, sex, the presence of apoplexy, intraoperative cerebrospinal fluid (CSF) leakage, and the use of physiologic and stress glucocorticoids. None of these factors predicted hyponatremia. The results of this study showed that slight fluid restriction (1.5 litters daily for two weeks) along with a single postoperative measurement of serum sodium level could be a practical approach for preventing hospital readmission due to hyponatremia in patients with pituitary adenoma after TSS (15) (Table 1).

In another study by Matsuyama on 207 patients with pituitary tumors, urine output, body weight gain, and serum sodium levels were measured daily after TSS. If two out of the three above-mentioned variables altered drastically, a fluid restriction regimen was employed. Other measures, such as < 200 mL of extra water beyond the about 1600 mL water present in daily meals, hypertonic saline, and vasopressin antagonists, were only administered in patients with severe hyponatremia. In addition to sex, age, tumor size, and tumor type, which had been previously suggested as important factors in the occurrence of transient DI, this study identified BMI as a significant predictor of both immediate and delayed postoperative hyponatremia. In other words, hyponatremia was more commonly observed in patients with lower BMIs (12) (Table 1).

Bohl et al. employed a DH care guideline based on fluid restriction, salt supplementation, daily measurement of serum sodium, and corticosteroid administration. They evaluated 229 patients, and it was observed that the incidence of DH was significantly lower in the case group, of whom 4% were readmitted to the hospital due to hyponatremia and 3% of whom were managed as outpatients. Readmission rates between the two groups were similar. The protocol failed to prevent readmission because patients with mild to moderate DH could not be managed as outpatients. Sodium levels precipitously declined after regularly screening, and severe hyponatremia developed after scheduled screenings were missed (13).

As mentioned earlier, DH is one of the leading causes of readmission after TSS in patients with pituitary adenoma. It has been observed that DH is a common finding among these patients, and it is essential to follow up and monitor the patients after surgery to avoid the complications of this type of electrolyte disturbance (16, 17). Although not common, severe hyponatremia can be a life-threatening event in these patients if left untreated (18, 19). With that in mind, coming up with a universal guideline for managing DH is a necessity. However, current investigations in the literature lack depth, and studies are not sufficient for coming up with a practical solution for the mentioned issue. Our initial search only yielded six studies, highlighting the need for follow-up studies to compare the protocols utilized for this purpose. Herein, due to the nature of the studies assessed and their different methodologies, we were unable to achieve a common approach for these patients.

However, several keystones have been proven to contribute to managing these patients. First of all, gridlines should focus on determining groups of patients who are vulnerable to developing DH. It has been reported that males, older people, and those with a lower BMI can be at risk of hyponatremia (20). Identifying and tightly monitoring these patients are crucial steps in preventing postoperative hyponatremia. Furthermore, monitoring serum sodium is necessary for identifying patients who are prone to hyponatremia. Kinoshita et al. (10) observed that an alteration of around ten mEq/L in serum sodium levels could predict the development of hyponatremia. Also, it was observed in all six studies that a fluid restriction regimen (1 - 2 liters/day during one to two weeks after surgery) could significantly lower the readmission rate and the occurrence of DH. Moreover, corticosteroid administration is a necessary measure in these patients; however, further investigations must be conducted to establish a unified protocol for corticosteroid utilization in these patients. Additionally, sodium supplementation, for example, with salt tablets, can be used to prevent postoperative hyponatremia and reduce readmission to the hospital after TSS.

In conclusion, male gender, advanced age, low BMI, and alterations in serum sodium levels can be considered risk factors for the occurrence of postoperative hyponatremia in patients with pituitary gland tumors. Moreover, fluid restriction, sodium supplementation, corticosteroid therapy, and daily sodium monitoring can be effective measures in preventing DH in these patients. Further investigations with larger sample sizes must be conducted in order to compare and unify the current existing protocols.

Copyright © 2022, Author(s). This is an open-access article distributed under the terms of the Creative Commons Attribution-NonCommercial 4.0 International License (http://creativecommons.org/licenses/by-nc/4.0/) which permits copy and redistribute the material just in noncommercial usages, provided the original work is properly cited.
download pdf 440.63 KB Get Permission (article level) Import into EndNote Import into BibTex
Number of Comments: 0