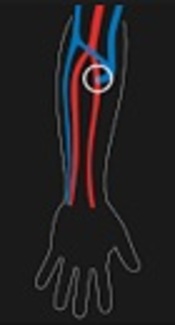 In this single-group clinical trial, 35 hemodialysis patients in the Besat hospital with convenience sampling was performed. Researcher two minutes before and during insertion of needles in artery fistula area by nurse, acupressure was conducted on the hugo point on other hand. This work was done in 3 sessions. Paired t-test was used to measure pain intensity difference.

There was a significant difference in pain intensity during a routine care and pressure on the Hugo point. The mean pain scores after the Hugo point acupressure was decreased in all 3 phases (P < 0.001).

Hugo acupressure points can be used as an effective and low-cost way to reduce the pain of needle insertion in fistulas in patients undergoing hemodialysis.

End stage renal disease, chronic, and common disease are increasing in incidence and prevalence (1). Therefore, the average global growth of this disease is 8% annually (2). Methods of treatment in these patients include hemodialysis, peritoneal dialysis (continuous ambulatory peritoneal dialysis and continuous cyclic peritoneal dialysis), and kidney transplantation (3). Hemodialysis is the most common treatment used in acute renal failure, chronic renal failure, and in Iran, however, the most common treatment is hemodialysis (4, 5). Therefore, the number of patients treated in this method is 50% (6). On the other hand, hemodialysis requires vascular access through arterio venous graft, central venous catheters, and arterial venous shunt (7). The arteriovenous fistula is the preferred method, low-cost access to the vessel because it is more efficient and has less side effects. Pain during insertion of needles in arteriovenous fistula continues to be a common problem in patients undergoing hemodialysis (8-10). Pain in patients is related with impaired health (10, 11) and reduced quality of life, have a negative effect on the physical, and intensify the side effects of treatment (11, 12). Reducing the pain caused them to be more accepting to hemodialysis and increased quality of life (13). Thus, the assessment and management of pain, palliative care, and good pain relief methods should be included in the guidelines (14).

Among suitable methods for pain relief, acupressure can be noted. Acupressure is a complementary therapy dating 5000 years ago. This form of treatment developed from traditional Chinese medicine and is considered today in most parts of the world. Based on that, the health outcome of the balance of vital life force through 14 channels called meridians in the body is turning (13-15).

Hugo, one of the pressure points on the meridians of the large intestine (LI4) called this point in the back of the hand, between the first and second meta carpal bone (15). Today, there are several studies on the impact of Hugo and its effect on reducing labor pain, nausea and vomiting caused by chemotherapy, fatigue and relief of pain in other cases (13, 16-19). Acupressure has many advantages, such as being non-invasive, does not require special tools, affordable, and convenient to the patient's education. Thus, according to the advantages mentioned in point acupressure, the researchers went on to study with the aim to evaluate of the acupressure at the point of Hugo on pain intensity of needle insertion in arteriovenous fistula in patients undergoing hemodialysis at Hamadan Besat hospital in Iran.

The purpose of this study was to determine and evaluate the acupressure at the point of Hugo on pain intensity of needles in arteriovenous fistula in patients undergoing hemodialysis.

In this Cross -over clinical trial study of a double-blind design, the study population included all hemodialysis patients referred to the dialysis ward in the Besat hospital in Hamadan city.

Sampling in this study was available. A total of 60 patients were referred to the dialysis ward, 35 patients were enrolled in the study.

Data were collected by the questionnaire and checklist that consists of two parts: The first part includes demographic data and information about the history of hemodialysis such as age, sex, marital status, education level, occupation, smoking and medical history current, cause of hemodialysis, as well as duration of fistula. The second part of the patient’s assessment of pain intensity. For assessing the patient’s pain intensity, visual analog scale (VAS) was used, 0 indicating no pain and 10 indicating the most severe pain. The results of several studies indicate that this is the appropriate valid and reliable instrument (20-23).

In the intervention group, acupressure was applied at the Hugo point immediately before needle insertion however, in the control group, there was no intervention other than routine nursing interventions. Each of the methods for each patient was over 3 consecutive sessions of hemodialysis. Before and during needle insertion, pain intensity scores were evaluated and recorded in both groups. Descriptive statistics, including mean, standard deviation, frequency distribution, relative and inferential statistics such as analysis of variance with repeated measures, paired t-test, and Tukey test was used. P < 0.05 was considered as significant level.

The clinical and demographic characteristics of the 35 patients presented in Table 1. Furthermore, results show significant difference between mean pain intensity score during 3 sessions of routine procedure and acupressure group (P < 0.001). The mean pain severity scores after acupressure on Hugo point was higher reduced rather than routine methods (Table 2).

Table 1. The Clinical and Demographic Characteristics of the 35 Patients
Table 2. Comparing the Mean and Standard Deviation of Score Severity of Pain and Pressure in 3 Sessions of Acupressure on Hugo Point and Routine Method

This study aimed to determine the effect of hugo point acupressure on pain severity of needle insertion in arteriovenous fistula in hemodialysis patients. The control and intervention groups were similar in terms of background characteristics (age, gender, and duration of hemodialysis). Result show that acupressure can reduce pain intensity of needle insertion in the intervention group rather than the control group. Some experts believe that stimulation of points in acupressure prevents the transfer of acute stimuli and increases the level of endorphins in the blood, thus, causing pain relief. A variant system known as 2 point acupressure attempts to bypass a blockage of vital flow by using 1 acupoint to create a link with 1 of the collateral meridians, and then using 1 additional acupoint to stimulate or reduce the flow around the obstruction. Some medical studies have suggested that acupressure may be effective at helping manage nausea and vomiting, for helping lower back pain, tension headaches, stomach ache, as well as other things, although such studies have been found to have a high likelihood of bias (24). The results of Gharloghi study show that acupressure can reduce of severity of primary dysmenorrheal (25). In addition, Suhrabi show that acupressure (UB32) reduce pain intensity in intramuscular injections (26). These results are similar to our study. In contrast, Kavianis’ study show that massaging with ice can higher reduce pain intensity, anxiety levels, and labor length in the point LI-4 rather than acupressure (27).

One of the limitations of this study was that the study might have low external validity and generalizability due to its large number of inclusion and exclusion criteria. Nevertheless, the strong points of the study were the large number of samples and its double-blind design.

Acupressure on Hugo point is an effective and low- cost method in reducing pain during needle insertion of hemodialysis patients. This method is simple and uncomplicated when teaching patients.

This article is sponsored by the deputy of Hamedan University of Medical Sciences and nursing and midwifery department with number 920210426. The code of ethics D/P/16/35/9/3497 has been registered. The researcher sincerely appreciates of all hemodialysis patients and staffs.