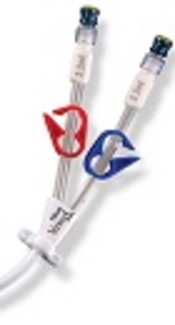 A total of 100 patients, admitted to our dialysis clinic, were enrolled in this prospective study from January 2014 to June 2016. In this randomized, controlled, comparative study, two groups were recruited and observed to determine the effects of Clopidogrel on the central catheter patency. The function of permanent catheters (permcaths) was evaluated during 6 months. The patients’ demographics, including comorbidities and medical history, were also determined to evaluate the probable effects on permcath patency. In this study, t test was used to analyze quantitative variables, while Chi square and Fisher’s exact tests were used to analyze qualitative variables.

The mean age of patients in the Clopidogrel and placebo groups was 55.5 ± 11.8 and 55.7 ± 12.1 years, respectively. The catheter survival was significantly longer in the Clopidogrel group in comparison with the placebo group (P = 0.02). On the other hand, the frequency of complications showed no significant difference between the groups (P > 0.05).

The results suggest that application of Clopidogrel following permcath insertion may be beneficial for catheter survival.

Patients with chronic kidney disease need proper vascular access (VA) for hemodialysis with adequate blood flow (1). Three long-term types of VA, which are currently used for this purpose, include arteriovenous fistulas (AVF), synthetic grafts, and tunneled catheters. Tunneled hemodialysis catheters have become widely available for application, allowing both temporary and permanent VA in patients for whom AVF is prohibited (2, 3). These catheters are used for emergency dialysis, besides initial treatment inhibiting permanent access. Moreover, they are applied as temporary devices in case of VA failure or as long-term solutions when a conventional fistula or graft cannot be established (4).

VA complications are the most important causes of hospitalization and morbidity in end-stage renal disease patients. Success of hemodialysis depends on the patency and function of permanent catheter (permcath) (5). On the other hand, thrombosis is the most common complication of VA and permcath insertion for hemodialysis (6). The 1-year survival of these catheters ranges from 35% to 74% (7). Therapeutic options for reestablishment of patency in failing catheters include the use of fibrinolytic drugs and stripping the fibrin sheath from the catheter tip. However, prevention of complications is very important and should be considered in the first catheter insertion (8-11).

The search for an optimal, low-cost agent or agents, which can be orally administered to dialysis patients on a regular basis and extend the patency of catheters, remains a challenge for nephrologists. We previously assessed the beneficial effects of aspirin following permcath insertion on catheter survival and showed an increase in permcath survival, without any important complications associated with aspirin (5). According to the literature, the benefits of Clopidogrel, an antiplatelet agent, in the reduction of vascular events, are superior to aspirin (12). Therefore, in this study, we examined the effects of Clopidogrel following permcath insertion on catheter survival.

During 2014 - 2016, a total of 110 patients, who were candidates for hemodialysis, were evaluated for eligibility to enter the study. All the patients required hemodialysis and provided a written informed consent to undergo permcath insertion. Ten patients were excluded for different reasons; finally, 100 samples were included in the study. This study was approved by the ethics committee of Shahid Beheshti University of Medical Sciences.

Hemodialysis patients for whom arteriovenous access could be problematic, impossible, or delayed (until arteriovenous access maturation for dialysis) were included in the study. On the other hand, the exclusion criteria were poor blood flow following permcath insertion during hemodialysis and absolute contraindication to Clopidogrel. All patients underwent standard preoperative assessments, including history-taking, clinical examination, and routine blood chemistry tests. Permcath insertion was performed by an experienced vascular surgeon. The catheter function was assessed via aspiration with a 20-cc syringe in the operating room after catheter placement.

This single-center, single-blind, placebo-controlled, parallel-group study (with balanced randomization, 1:1) was conducted at the vascular surgery department of Tajrish hospital, Tehran, Iran. Patients were randomly allocated to 2 groups, according to the method of treatment: Clopidogrel or placebo. Randomization was carried out, using a computer-generated table of random numbers at a ratio of 1:1. Sample size was measured considering type I error < 5% and type II error < 20%.

The Clopidogrel and placebo tablets were similar in terms of appearance, size, shape, and color. They were prepacked in drug bags. In group I, the bag contained 75-mg tablets of Clopidogrel, while in group II, the bag contained placebo tablets. A physician from a hospital unit, unrelated to the trial, received the bags, each containing 30 tablets according to the randomization method. The patients were prescribed to use 1 tablet per day. After 1 month, they were given another bag of tablets.

An experienced vascular surgeon reinserted dysfunctional permcaths, which had not received adequate blood flow for acceptable hemodialysis; systemic infection due to permcath-related bacteriemia was also evaluated. In each dialysis session, catheter-related problems were documented. Catheter malfunction was taken into consideration if there was any failure in preserving the minimum blood flow (300 mL/minutes). The treatment results included catheter thrombosis (irreversible closure of the catheter), catheter infection, and bleeding from the catheter site. Also, any gastrointestinal (GI) problem was evaluated for GI hemorrhage complications.

A total of 100 consenting patients, who were admitted to our dialysis clinic and met the inclusion criteria, were enrolled in this prospective study from January 2014 to June 2016. The mean age of patients in the Clopidogrel and placebo groups was 55.5 ± 11.8 and 55.7 ± 12.1 years, respectively (P > 0.05). Table 1 presents a summary of the baseline characteristics of the groups. There was no significant difference between the groups regarding any of the parameters. The male-to-female ratio, body mass index (BMI), history of medical problems, and drug or cigarette use were not significantly different between the groups. Five patients from group 1 (10%) and 4 cases from group 2 (8%) had episodes of hematemesis or hematochezia. Based on the findings, the incidence of bleeding was not significantly different between the groups (P > 0.05).

Table 1. Comparison of Demographic Characteristics Between the Groups

Table 2. Comparison of Permcath Survival Rate Between the Groups

This study assessed the effects of Clopidogrel on the patency of permcaths in dialysis patients. The duration of catheter survival was significantly longer in the Clopidogrel group in comparison with the placebo group. This clinical trial suggests that Clopidogrel use following permcath insertion may be beneficial for catheter survival. The catheter survival rates in our study were similar to the previously published rates.

In the current study, after 6 months of follow-up, 22% of patients had patent permcaths. Shaffer et al. reported a primary patency of 35% in the 1-year follow-up. In addition, Mozafar et al. reported the mean survival of catheter to be 5.3 ± 4.7 months in the aspirin group (5). In our study, the survival rate of permcath at 4 and 5 months of follow-up was higher in the Clopidogrel group, compared to the placebo group. This finding suggests that addition of Clopidogrel to the drug regimen after permcath placement can postpone permcath reinsertion in patients who need these catheters; moreover, this approach can lead to the cost-effective management of these patients.

It seems that despite platelet dysfunction in patients with chronic renal failure, aggregation of platelets increases during dialysis; this process may lead to clot formation in the dialysis catheter (13, 14). Windus et al. showed that platelet uptake in grafts is improved after dialysis, while antiplatelet drugs can reduce this uptake (15). It can be assumed that chronic use of antiplatelet agents may reduce platelet adhesion to dialysis catheters.

The beneficial effects of aspirin, as an antiplatelet agent, on the reduction of VA thrombosis were introduced by Harter et al. in 1979 (16). Clopidogrel is another antiplatelet agent, which blocks platelets by inhibiting the adenosine diphosphate pathway. Some researchers have revealed the superior advantages of Clopidogrel versus aspirin in the reduction of vascular events (12). Overall, the frequent use of Clopidogrel is related to its prescription as a prophylactic drug in cardiovascular diseases; different clinical trials and meta-analyses have confirmed this finding (17).

Antiplatelet therapy is associated with hemorrhagic complications, such as GI bleeding, which is one of the most common life-threatening complications of this regimen (7). Several large-scale clinical trials reported the rate of GI bleeding to be 0.6% - 4.8% in patients treated with Clopidogrel (17). The present findings showed a comparable rate in treated patients. However, the percentage of GI bleeding in the Clopidogrel group was not significantly higher than the placebo group.

In conclusion, the present study suggests that Clopidogrel is an effective drug in preserving the patency and survival of permanent hemodialysis catheters. Based on the findings, the rate of bleeding and hemorrhagic events was not significantly different between the Clopidogrel and placebo groups. Therefore, we suggest Clopidogrel prescription for all patients undergoing permcath insertion. However, it is recommended to assess the function of catheters in future studies.