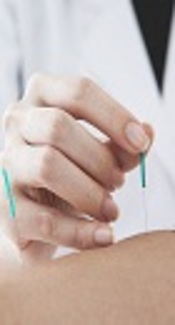 The Effects of Acupuncture Treatment in Infertile Patients with Clinical Varicocele

To evaluate the effect of acupuncture on the semen quality of patients with clinical varicocele and their fertility outcomes.

A total of 158 men, with the primary infertility and clinical varicocele were randomized into two groups. The study group underwent a subinguinal microscopic varicocelectomy, and control group without operation. Then, each group was randomized to two sub groups; the first subgroups from them (sub group study 1 and sub group control 1) underwent acupuncture treatment twice a week for 2 months, the next subgroups (sub group study 2 and sub group control 2) underwent sham acupuncture. All subgroups were evaluated by performing spermogramms after 6 months and notifications were made by phone call for the results of their wives pregnancy.

According to our results, in this study acupuncture procedures in primary infertile clinical varicocele patients with semen abnormalities was effective, especially if combined by varicocelectomy.

A varicocele is an abnormal dilatation, kinking, and elongation of the pampiniform venous plexus in the scrotum within the spermatic cord (6). Although the clinical varicoceles have successfully been treated traditionally by surgical techniques and in most of them, semen abnormalities improve and pregnant own spouses, however, due to the fact that a significant proportion of them remain infertile; therefore most of them referred to varieties of non-surgical treatments, various empirical drugs, herbal medicines, ART procedures, and acupuncture (7).

The recent success and availability of ART procedures has raised the hopes of many infertile couples who have not been able to conceive naturally due to male or female infertility factors, however, the rate of failure in ART procedures is very high and patients may have a high expectation of treatment; thus, the practitioners are advised to offer no expectations of success. In addition, according to the American Society for Reproductive Medicine (ASRM), the costs of a single IVF cycle is about $12400 and women often need frequent procedures to get pregnant. Furthermore, the IVF cycles result in pregnancy is lower than general expectation; therefore, most of them do not result in pregnancy (8).

Furthermore, one of important complications of IVF procedures in women is severe ovarian hyperstimulation syndrome with more intense pain and abdominal bloating, which in some women may be life threatening (9). This may occur in about 3% - 8% of women undergoing ART procedures (10).

A report from the UK in 2006 has showed that a single initiated IVF cycle success rate with a fresh and non-donor site was only 33% and pregnancy rates remain around 20% - 30% per started cycle (11-13). Due to the high financial and emotional cost of this procedure, many couples have turned to complementary and alternative medicine; thus, there is now a proliferation of patient self-referrals for acupuncture as well as a world-wide increase in the number of acupuncture clinics offering this therapy as an adjunct to IVF procedures.

The acupuncture procedures have been used in some studies in the andrology fields as an alternative medicine for the treatment of the male infertility and also to increase the success of in vitro fertilization (14). Although many studies have showed that acupuncture had a positive effect on the semen parameters of subfertile men and even those who had severe oligoasthenozoospermia, the idiopathic male infertility is the most common field that a researcher worked on (15). So far, as our knowledge, there is no study on the effect of the acupuncture treatment in the infertile patients with clinical varicocele.

We have proposed this prospective, controlled, and randomized study on infertile patients with clinical varicocele and semen abnormalities in count, morphology, and/or progressive motility to asses if acupuncture could affect their semen parameters and increase pregnancy rates.

This study was performed in the Department of Urology in the Kerman Medical Sciences University of Iran between August 2010 and July 2014. A total of 158 childless patients with left side clinical varicocele (grade 1 - 3) were included with sperm abnormalities in count, shape, and/or progressive motility detected in two semen analyses samples. They were otherwise healthy. In the first stage they were randomized into two groups: the varicocelectomized group (n = 70), aged 24 - 43 years (mean 33.4 years) and married for 5 - 11 years (median 7.6 years) that underwent subinguinal microscopic varicocelectomy by Ali Asghar Ketabchi and the non-varicocelectomized group as control (n = 70), aged 26 - 42 years (mean 32 years) and married for 3 - 8 years (median 6.5 years). The varicocelectomized group, after operating, followed 14 days for surgical complications and recurrence probability (by physical examination and color Doppler ultrasound), the varicocele grades in study and control groups were 70% grade 3, 13% grade 2, and 17% grade 1 vs. 65% grade 3, 25% grade 2, and 10% grade 1, respectively (P > 0.05). Then, in the second stage each above group was subdivided randomly to acupuncture (as Kreinr et al. model) by simple needle insertion (study subgroup) by obtaining needling sensation (De qi sensation) at each point in active intervention and sham acupuncture by blunted needle (control subgroup) by obtaining only needle touch sensation, each session of treatment consisted of 25 minutes of acupuncture and each course lasted about 10 weeks (twice a week) (16). In both methods we used an adhesive foam to keep needles in place and in sham method the experienced practitioner was careful the blunted needles did not penetrate the skin, the needles that were used were stainless steel disposable (0.25 mm, 30 mm,) and the characteristics of needle insertions (depth and direction at each point) were according to the acupuncture treatment fundamentals (16). Acupunctures procedure and points selection (Table 1) was done by one of the authors who specialized in this field and also the acupuncture points were selected on the base of previous studies experiences in male infertility (17). This clinical study was approved by the Institutional Review Board. Credibility of sham acupunctures needles assessed by treatment belief and Borkovec and Nau Credibility scale (18).

Patients with bilateral varicoceles, subclinical varicoceles, azoospermia, leukocytospermia, previous reproductive organ surgery, secondary infertility, with higher age wives (> 35 years), who has acupuncture experiences, or history of using drugs that affect the genitourinary system during the last year have been excluded.

The pre- and post-treatment data in each group compared by Wilcoxon tests and the ANOVA test was used to compare the four groups in relation to the calculated percentage data.

From 158 patients 101 of them completed the study, indicating the cooperative patients in this study. Finally, statistical analysis was performed with 50 patients in the study group and 51 in the control group. A total of 18 patients were excluded on the account of not meeting the inclusion criteria and refused to participate. In addition, 19 patients before completing the study, except four patients in the varicocelectpmized group for recurrence, were excluded mainly for unknown reasons (Figure 1). The final distribution of varicocele grades between all subgroups was similar.

The comparison of pre- treatment data as semen, age ranges, and married duration did not show significant differences between the two main groups.

After active acupuncture intervention, the patients of the study groups had a significant increase in the percentage of normal-shape and motility sperm in comparison to the control groups (Tables 2 and 3); pregnancy rates in varicocelectomized with acupuncture group was significantly better than other groups (Figures 1 and 2).

Table 2. Comparison of Normal Sperm Morphology in Groups (After vs. Before)

Table 3. Comparison of Fast Forward Sperm Counts in Groups (After vs. Before)a,b

The results of this study showed that the treatment of patients with semen abnormalities with clinical varicoceles using acupuncture could qualify semen parameters and then improve their spouses’ pregnancy rates. These results were similar to the findings of Longbottom et al. and Kucuk et al. (11, 17), and also, latter Gerhard et al. and Siterman et al. have reported positive effects of acupuncture on sperm abnormalities in infertile men (20, 21). One of the possible mechanism by which the acupuncture has positive effects on semen quality may be their action through the nervous system. The neural fibers A delta and/or C is responsible for generating an action potential in histologically differentiated acupuncture points (22). This stimulation leads a somatovisceral reflex arc at posterior column medulla level that finally reaches to superior centers as cerebral cortex, thalamus, and reticular formation. In addition, it may qualify the testis and epididymis circulation by vasodilation (23-25). The other probable mechanism of acupuncture effect on sperm parameters is via reactive oxygen species (ROS) alteration in semen. It is known that ROS has significant effects on quality of infertile men semen, especially in varicocele patients with abnormal sperm motility (26). The recent reports demonstrated that in the treatment of infertile men with acupuncture the ROS levels in their semen significantly decreased, especially in those with genital tract inflammation and varicocele (22). When the production of ROS (mainly from immature and/or damaged spermatozoa and polymorphonuclear neutrophils) occurs physiologically during normal cell, the metabolism exceeds the natural antioxidant defenses, oxidative stress occurs and results in serial lipid peroxidation reactions, which causes more radicals and ROS formations that can damage other body tissues and cellules as sperm cells with specific lipidic composition. Therefore, excessive ROS production in semen is responsible for the functional and morphological alterations in sperms (27, 28). The vasodilatation caused by acupuncture that would supply antioxidant supplementation as vitamins C and E, selenium, and carotenoids are examples of antioxidants found naturally in many fruits and vegetables, such as beta-carotene, lycopene, lutein, and zeaxanthin to prevent plasma membrane peroxidation damage by ROS. In addition, by allowing the gamete recovery cause, the sperm parameters improve, in particular, normal-form sperm counting (22).