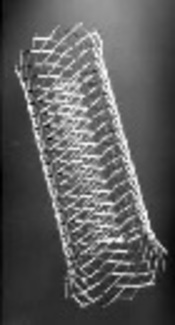 Several surgical reconstructive procedures are introduced to repair a hypospadiasis while post-operative complications have still remained high. Poor tissue handling, anastomotic site ischemia, tension on the anastomotic line, and distal obstruction are suggested as the main risk factors contributing to post-operative complications. This article is the introduction of a simple technical modification to perform a uniform straight tension free urethroplasty that is supposed to decrease post hypospadias repair complications.

We used a 6F silicon Foley catheter and covered it by a part of 10 F Nelaton catheter at the most distal part of the Foley. To facilitate the covering and uncovering process, we incised the Nelaton catheter in one side through the whole length. We performed a two-layer closure urethroplasty over our double layer stent and finally uncovered the Foley catheter, which remains in the bladder as a trans-urethral stent and also for further bladder drainage.

In our innovative method of urethral stenting, we have suggested to replace the transurethral stent with a tension free lower size catheter easily and safely at the end of procedure, which helps decrease suture line tension and is supposed to improve the local circulation.

Hypospadias is among the most common congenital anomalies that should mostly be managed by reconstructive surgery (1). During the last decades, more than 300 surgical techniques were introduced for hypospadias repair, which indicated the lack of a perfect and generally accepted single method (1).

Different operative techniques may be applied regarding the location of urethral meatus, penile shaft and chordee, native urethral plate and other anatomic variables, and also the surgeon expertise and preference. Despite several available surgical choices and new modifications, post-operative complications remain still high (2). The most common complication of hypospadias repair is wound and skin problems such as hematoma, dehiscence, necrosis, and poor cosmetic results (3). The second and most important complication is neo-urethral fistula, which should mostly be managed by redo urethroplasty (2, 3). Other complications such as meatal stenosis, urethral stricture, diverticulum formation, and urethrocele are also reported (3).

Flap tubularization and anastomosis is the mainstay of almost all hypospadias repair techniques while the etiology of its complications such as fistula, stricture, or flap failure could be explained by the review of reconstructive surgical principles. Poor tissue handling, anastomotic site ischemia or tension, and distal obstruction were suggested as the main risk factors for urethral strictures and fistula (2, 4).

After penile straightening and chordee release as well as preparing the neo-urethral plate for tubularization, conventionally, a proper urethral stent (mostly 6 - 10 Fr) was passed to the bladder and secured in place; the urethroplasty is performed over the catheter by two layers of running sub-epithelial stitches (5). We realized that in order to make a watertight uniform tubular urethra with acceptable caliber, the urethral catheter should be fitted in neo-urethra while performing the tubularization anastomosis. At the time of supporting the second layer closure, there will be more tension on the suture line and also the whole flap, even if a dorsal relaxing incision is made. At the end of urethral reconstruction, with conventional methods, we always have a tight neo-urethra over the stent. We proposed a simple modification to release the anastomotic site tension at the end of the procedure using double layer urethral stent.

While evaluating the urethral plate and meatal caliber and deciding about choosing a proper urethral stent, we used a lower size 6F silicon Foley catheter and covered it with a 15 mm length of upper size 10F Nelaton catheter at the most distal part just near the Foley catheter bifurcation. To perform the covering process easier, we incised the cover catheter in one side through the whole length, which will also facilitate to uncover the main draining catheter at the end of procedure (Figures 1 and 2). 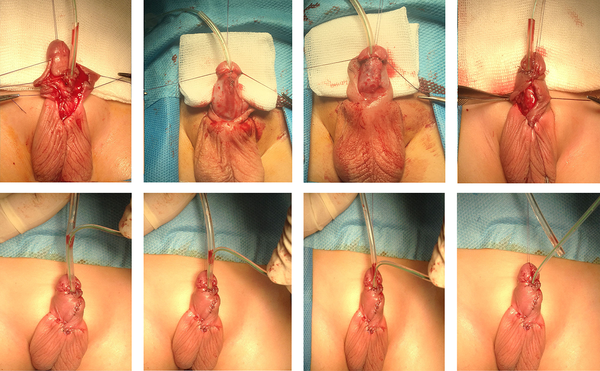 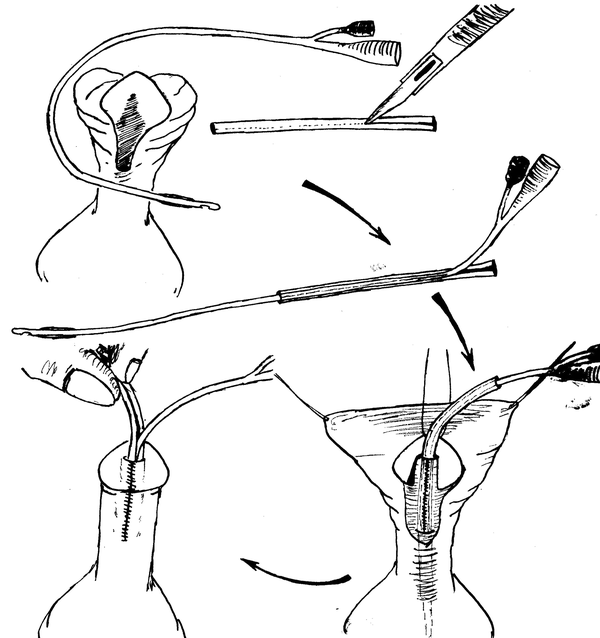 Two-layer closure urethroplasty was performed over our innovational double layer stent by a single surgeon in a standard TIP method.

Creating a uniform tubular watertight neo-urethra would always make the reconstructed urethra tight and well fit on the double layer stent. When moving the catheter back and forth, one can feel this tightness at the end of the procedure. The covered silicon Foley catheter would be pulled out while the full filled catheter balloon will prevent complete extraction of the catheter. Then, the cover will be removed and the lower size 6F Folley catheter remains secure in the neo-urethra. Moving this catheter back and forth will observe the free movements of the urethral stent without any pressure on the anastomotic line.

We have introduced this modified technique since early 2016 and compared short-term follow ups of the first 20 cases of mid shaft hypospadias who underwent TIP repair over a double layer urethral stent with other 20 mid-shaft hypospadias cases who were with the conventional TIP method. All enrolled cases were completed at least at a one-month follow up.

We assessed early post-operative catheter related complications such as catheter blockage and urinary retention or catheter dislodging as well as removal and also skin flap problems such as fistula formation or anastomosis failure and flap break down.

Urinary retention was observed in 5 patients, where in 4 of them, the catheter had to be removed; the catheter became functional by irrigation in the other one.

The trans-urethral catheter removed spontaneously in one patient in the modified double layer urethral stent.

Two proximal fistula was detected that were both in the conventional group. Partial anastomotic line breakdown happened in one patient from each group that were managed with redo urethroplasty six months later.

Glansoplasty failure was observed in six patients, five of them were operated by conventional method.

The results are summarized in Table 1.

Several hypospadias repair techniques are introduced up to date while most of them are based on tubularization of urethral plate using the native urethral plate (snodgrass modification), inner preputial flap (duckett procedure), and augmented urethral plate by buccal mucosal graft (two stage Bracka technique). Applying the concept of tubularization, urethral fistula, stricture, and stenosis remain the most challenging post-operative complications (2, 6). Skin and anastomotic problems due to impaired local vascularity, tension on suture line, and distal stenosis were suggested as the main post-operative complications (2, 6).

A review of surgical principals and facts helps us improve the systemic and local conditions to facilitate tissue healing. One of the local contributing factors is direct pressure and tension on the anastomotic line, which is mainly applied by the urethral catheter.

Urinary drainage is recommended in almost all different reconstructive methods (3) and direct pressure of the urethral stent over anastomotic line is believed to have a role in local ischemia, poor healing, and related complications. In our innovative method of urinary drainage, we replace transurethral stent with a tension free lower size 6F catheter easily and safely at the end of the procedure. This catheter will be used as a trans-urethral stent and the patient is also able to void through his neo urethra if the Foley is blocked for any reason.

Foley catheter malfunction is a common problem after hypospadias reconstruction surgery that may be caused by blockage or kinking of the catheter. In this setting, urinary retention may happen, which makes the patient and parents very nervous and agitated.

Urinary retention was significantly more common among patients who were treated with conventional method, which could be explained urethral obstruction with a blocked Foley catheter while it is tightly fitted in the neo-urethra. In the same circumstances among patients who operated with the modified double layer urethral stent, the neo urethral caliber is uniformly larger than the catheter that would allow the patient to void through the neo urethra even while a blocked stent is secured in its place.

Glansoplasty failure was also significantly more common in the conventional group. This may be explained by the same probable local ischemia in the conventional group; in addition, bending the catheter at its exit site from meatus may put excessive local pressure on reconstructed glance. The thicker the stent, more pressure will produce over glandular wing stiches. A 6F silicon Foley catheter is so soft and will kink while excessive bending at its exit site from meatus.

We have used this innovative method for almost two year successfully and the RCT results will come out soon to demonstrate its effectiveness in reducing post hypospadias repair complications in practice.

Primary results (Table 1) showed significantly less urinary retention as the patient will void even while the lower size catheter is blocked; in addition, less glansoplasty failure may be due to minimal tension on glandular stiches over a 6 F soft catheter.

We would like to thank Maryam Hiradfar for her help in English editing.