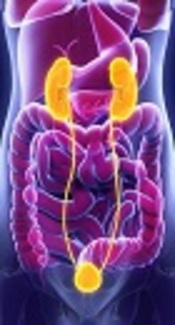 A Rare Case of Urachal Adenocarcinoma: Long Term Follow Up

Urachal adenocarcinoma is an invasive and rare bladder carcinoma that usually presents at advances stages with poor prognosis. The symptoms often include abdominal pain and hematuria. The standard treatment method is surgical excision of the tumor and sometimes, in advanced cases, chemotherapy is needed, too.

We present a 35-year-old male patient, who referred with acute onset of painless macroscopic hematuria. Pelvic CT scan showed a large mass on the bladder dome, extending to the umblicus. Biopsy of the mass confirmed that the pathologic diagnosis was urachal adenocarcinoma. The patient was then treated surgically with partial cystectomy approach.

Despite microscopic involvement of pelvic lymph nodes, adjuvant therapy was not intended. There were no local recurrence or distant metastasis in long term close follow up.

The urachus is the remnant of urogenital sinus. It often closes spontaneously by the second trimester, leaving the median umbilical ligament as its remnant (1). However, its relation with the urinary bladder may persist in some adult patient. Urachal cancers are rare malignancies of the bladder, which consist of less than 1% of all bladder cancers, and about 30% of primary adenocarcinomas (2). The most common type of urachal carcinoma is adenocarcinoma (89%), followed by sarcoma, and transitional cell carcinoma (4%). The common symptoms are hematuria and lower abdominal pain (3). Computed tomographic (CT) scan usually shows a midline mass between umbilicus and bladder, which may contain peripheral calcifications in 50% - 70% of cases. This pattern is considered as pathognomonic for urachal adenocarcinoma (4). We report a 35-year-old man with stage pT4a urachal adenocarcinoma (5) and microscopic involvement of the pelvic lymph nodes. He was treated with surgical excision, in a partial cystectomy approach, without adjuvant therapies. In the period of 2 years after surgery, no local recurrence or distant metastasis was noticed.

A 35-year-old male patient, with no remarkable past medical and family history was presented to our urology clinic with painless macroscopic hematuria for the last six months. In addition, he also had a history of urinary urgency and frequency. His physical examination revealed mass sensation at the suprapubic region. His serum hemoglobin was 14.3 g/dL, renal function test was normal (his serum creatinine level was 1.1), and the urine was sterile.

Subsequently, cystoscopy was performed and showed a solid tumor, which measured about 3 centimeters in the bladder dome. Biopsy of the bladder mass revealed adenocarcinoma and partial cystectomy was planned for treatment. The CT of chest, abdomen, and pelvis did not show any regional or distant metastasis. Open partial cystectomy, with total urachectomy up to the umbilicus and bilateral pelvic node dissection, was done through a midline incision (Figure 2).

Histopathology of the material demonstrated urachal signet ring cell adenocarcinoma, with intact surgical borders. There was perivesical adipose tissue infiltration and regional lymph node metastasis (Sheldon stage IV A) (Figure 3). He was followed up with 3-month-interval cystoscopies and imaging up to 2 years with no localor distant relapse. 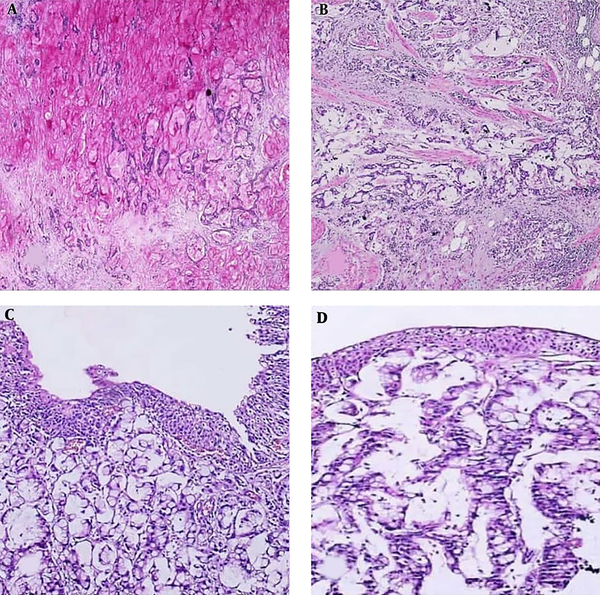 A, bladder mucosa infiltrated by a mucinous adenocarcinoma, H & E (×100). B, another view of the tumor showing obvious glandular differentiation with signet ring cells (×100). C, invasion of the tumor through muscularis propria into bladder adventitia (×40). D, PAS staining demonstrating intra and extra cellular mucin produced by the tumor (×40).

The urachus is the embryological remnant of allantois and cloaca. It has patency with the urinary bladder, which would be obliterated with advancing age. However, its patency may persist in some patients (6).

Hue and Jacquin had presented urachal tumors for the first time in the 19th century. They consist of less than 1% of all bladder cancers and about 30% of primary adenocarcinomas (7).

The MD Anderson Cancer Center (MDACC) introduced five criteria for urachal cancers, which include a midline mass, a distinct margin between the tumor and bladder urothelium, a bowel histology, no bladder dysplasia, cystitis cystica, or cystitis glandularis, as well as no adenocarcinoma in other sites (8, 9). In addition, Wheeler and Hill, in the 20th century, introduced five criteria: Mass in the anterior wall, inner extension of tumor in the bladder wall, no cystitis cystica or cystitis glandularis, presence of embryonic remnants, and no extra vesical origin (10). Our case fulfilled most of these two groups of criterias.

Sheldon et al. (1) had suggested the first and the most popular clinical staging system in 1984 (Table 1).

Table 1. The First and the Most Popular Clinical Staging System

They are controversies in treatment of the urachal carcinomas. Surgical management includes resection of three parts: Umbilicus, urachal ligament, and the bladder (partial or total cystectomy). Partial cystectomy is the gold standard when the tumor is resectable (8).

In comparison with laparoscopic and robotic procedures, open surgical methods are the main treatment option due to the fact that there are no large patient series available to compare the results. Therefore, there has not been any definitive evidence of the usefulness of neo adjuvant or adjuvant chemotherapy in urachal adenocarcinoma.

Prognostic factors for decreased survival include distant metastasis, local invasion to the abdominal wall, peritoneum or adjacent viscera, and lymph node involvement (12). In addition, one of the most significant prognostic factors is the status of surgical margins (12).

Ogaya Pinies et al. reported two cases of urachal adenocarcinomas, which were treated as extended partial cystectomy, the same as our reported case and stated that the main predictors of disease-free survival are the degree of tumor differentiation and the free margins of the surgical specimen (13).

Bao et al. reported a woman with urachal adenocarcinoma and involvement of ovaries, who underwent partial cystectomy and bilateral salpyno-ophoorectomy, without adjuvant therapy. In a duration of 5 years follow up, no recurrence or distant metastasis had been noticed (14).

In a series reported by Gopalan et al., three out of 24 patients received adjuvant radiotherapy, however, all three developed local recurrence in the follow up period (5).

The study of Chen et al. consisted of 14 patients (64.3% of males (9/14) and 36.7% females), which 92.9% (13/14) of their resected urachal tumors proved to be adenocarcinoma. Seven patients in their study underwent extended partial cystectomy. Only one case had local recurrence two years after operation and the other six cases were free of recurrence 54 months later. One patient in their study was found to have rectus abdominis muscle involvement; therefore, part of the rectus abdominis was excised, too. Three patients in their study had advanced stages and were treated with chemotherapy alone. Two were followed up for seven and eight months after treatment and showed stable disease; however, one died six months after chemotherapy. Two patients had post-operative recurrence. One survived 21 months after combined therapy; while the other one did not receive any chemoradiotherapy and died three months after recurrence. They concluded that combined therapy has some impact on the patients’ survival who has advanced disease and/or post-operative recurrence (16).

Urachal tumor is a rare and aggressive cancer. The optimal management of these tumors is uncertain due to its rarity. The main treatment method for urachal carcinoma is complete surgical resection. Chemotherapy has been considered for cases with distant metastatic disease or local invasion. We present a stage pT4a urachal adenocarcinoma, in a 35-year-old man, who underwent partial cystectomy and pelvic lymph node dissection with no systemic adjuvant therapy. In the period of the two year follow up, no local recurrence or distant metastasis was noticed.