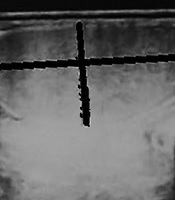 Epididymal Metastasis of Cholangiocarcinoma, an Extremely Rare Event: A Case Report and Review of the Literature

Therefore, in this case report, we will describe our experience with a case of metastatic cholangiocarcinoma to the epididymis.

A 36-year-old man presented with chief complaint of right scrotal swelling and tenderness. Physical examination showed an emaciated middle-aged gentleman with jaundice. His pulse rate, blood pressure, respiratory rate and temperature were normal. His laboratory findings were as below:

All the imaging studies including chest and abdominopelvic CT scans were normal.

Ultrasonography of the testis showed a hypoechoic mass in upper pole of the right testis (Figure 1). The patient underwent orchiectomy and the right testis and epididymis were removed. Figure 2 shows the gross pathology of the orchiectomy specimen, the arrow shows the tumor in the epididymis. Benign and malignant tumors of the epididymis are very rare. More than 94% of the tumors in epididymis are benign and malignant tumors are very rare. Metastatic carcinomas to epididymis have been extremely rare (14). Table 1 shows the details of the 13 previously reported cases of metastasis to the epididymis as well as the current case. The age range of the reported cases have been 50 - 77 years (65.7 ± 10.3). Our case is the youngest reported case (36 years of age). There has not been any preference for the right and left epididymis. In 5 cases metastases have been to the left epididymis, right in 4 cases and it has been bilateral in 3 cases. In our case, the tumor has been in the right epididymis. In one of the previous cases, the side of the metastasis has not been reported (1-13).

Table 1. Clinicopathologic Characteristics of the Reported Cases of Metastatic Carcinoma to the Epididymis in the Last 20 Years

Clinical presentation of epididymal metastatic tumors have been nonspecific. In 2 patients, metastasis from prostate has been incidentally found by investigation of the source of high PSA (prostatic specific antigen) (7, 13). In other patients the presenting symptoms have been scrotal mass, swelling, and tenderness (2, 4, 5, 7-9, 11). Other more uncommon signs and symptoms have been urinary tract infection (6, 9) and low back pain (1).

In 5 patients epididymal metastasis had been detected at the same time of the diagnosis of the primary cancer (2, 9-11, 13). In others, this interval between the diagnosis of the primary tumor and the epididymal metastasis had been between one to 8 years (2.6 ± 2.4). Our case was detected 2 years after liver transplant and resection of the cholangiocarcinoma.

As the table shows, in the last 20 years, only one case of metastatic cholangiocarcinoma to the epididymis has been reported (9) and our patient is the second case.

In most of the previous cases, the primary method of diagnosis has been clinical, which was confirmed by pathologic diagnosis. In a few patients, tumor markers have been helpful especially PSA in prostate adenocarcinoma (7, 13). However, in a few cases, imaging studies have been the primary method of diagnosis. Radiologic methods were ultrasonography (US), computed tomography scan (CT scan), magnetic resonance imaging (MRI) and even PET (positron emission tomography) scans (7). US findings had been reported as a homogenous, well-defined and hypoechoic mass (1, 11, 14). CT scan of epididymal metastasis revealed a solid mass (1). MRI had shown a heterogeneous nodule, with arterial vascularization (5). In the majority of the cases there has been no definite diagnosis by radiology, so orchiectomy had been performed (13). Needle biopsy has also been performed in cases with primary presentation of epididymal tumor and no prior diagnosis such as a reported case of metastatic gastric cancer which was primarily diagnosed based on histologic features of metastasis in the epididymis (2).

For confirming the metastatic nature of a carcinoma in the epididymis, history of primary tumor, comparison of the histologic features of the primary and metastatic cancer have been very important and immunohistochemistry has been reported to help confirming the primary origin, such as PSA for prostatic cancer. However, no specific marker has been reported in primary cancers of epididymis (15).

As a conclusion, metastatic carcinoma to the epididymis is a very rare event, and metastatic cholangiocarcinoma is extremely rare.