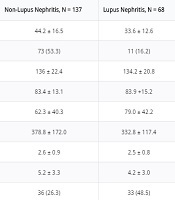 Lupus nephritis (LN) is the most common etiology of secondary glomerulonephritis. Several studies have identified the risk of LN in SLE patients. However, clinical factors predictive of LN in patients who underwent kidney biopsy for the first time was limited if there was no previous history of SLE.

This study aimed to investigate the clinical factors predictive of LN by kidney biopsy regardless of SLE history.

We conducted a retrospective study between January 2012 and May 2013. The inclusion criteria were adults over 18 years old who underwent the first kidney biopsy in their lives. Participants were divided into two groups according to renal pathology (LN and non-LN group). Predictors for LN in those without history of SLE were executed by using by logistic regression analysis.

ANA should be tested in all patients who underwent kidney biopsy regardless of previous history of SLE.

Systemic lupus erythematosus (SLE) is an autoimmune disease. Its incidence rates were between 0.9 - 3.1 cases/100,000 per year in the Asia Pacific region (1). More than 90% of affected patients are female (1). Renal involvement of lupus nephritis (LN) is more common in Asian populations compared with Caucasian populations. LN can manifest either at initial presentation or later on and has an accumulate rate of 60% (2). LN progresses to end stage renal disease in up to 20% patients. A study from the UK conducted on 45 SLE patients found that longer duration of SLE, poor baseline serum creatinine, and high platelet count were associated with poor estimated glomerular filtration rate (eGFR) (2).

In Thailand, secondary glomerular disease accounted for one-third of patients who received kidney biopsy (3). LN was the most common cause of secondary glomerular disease (88.5%). A study from China also found that LN was the most common cause of secondary glomerulonephritis as well, with prevalence of 74% (4). Some clinical features and serological tests are predictors for LN in SLE patients. A study from Columbia found that presence of anti-dsDNA antibodies, pleuritis, and hypertension are independent predictors for LN (5). Among these factors, having pleuritis had the highest adjusted odds ratio at 3.82. However, the risk factors for LN may vary among ethnicities. A study from France on 180 patients found that malar rash, pericarditis, and hypertension were associated with LN (6). Most studies identified risk factors for LN among limited SLE patients but were limited to those without history of SLE or in resource-limited facilities with kidney biopsy.

This study aimed to assess if clinical features can be predictors of LN regardless of previous history of SLE.

This study was conducted retrospectively at Khon Kaen University’s Srinagarind Hospital in Khon Kaen, Thailand. The study period was between January 2012 and May 2013. The inclusion criteria were adults over 18 years old who underwent the first kidney biopsy in their lives. We excluded patients with unclassified pathological diagnoses or inadequate tissue biopsies.

The outcome of this study was pathological diagnosis by light microscopy and immunofluorescence. The results of LN from kidney biopsies were reported according to the International Society of Nephrology/Renal Pathology Society (ISN/RPS) 2003 classification by consensus between pathologists and nephrologists.

The study protocol was approved by the ethic committee in human research, Khon Kaen University.

bThe total number in each group was not equal to 137 or 68 patients due to missing data.

After adjustment using stepwise logistic regression analysis, there were six factors remaining in the final model (Table 2). Of those, only three factors were independently associated with LN, including eGFR, history of SLE, and RBC in urine > 10 cells/HP. The history of SLE had the highest adjusted ORs at 16.8 (Table 2).

Subgroup analysis was performed by excluding patients with a history of SLE. The results of multivariate logical regression showed ANA result was the only independent factors in predicting LN with ORs (95% CI) of 14.5 (1.4, 150.8).

The prevalence of LN in patients who underwent kidney biopsy in this study was 33.2%. The rate was comparable with previous studies from Thailand and China (3, 7). However, this prevalence rate was higher than in other countries (8, 9). The prevalence of LN in Iran and Brazil were 11% and 17.8%, respectively. The prevalence of LN in Thailand may be high due to two major non-genetic factors. First, the ultraviolet level in Thailand is high and may aggravate severe SLE disease (10). Secondly, socioeconomic status may affect the severity of SLE (11, 12). Unlike the European example, Asian SLE patients may have lower socioeconomic status, leading to higher risk of severe LN (12). SLE patients with European ancestry had lower risk for severe LN with a hazard ratio of 0.4 (13, 14).

There were three simple clinical factors predictive of LN in patients who underwent kidney biopsy in our university hospital located in northeastern Thailand. These factors were a history of SLE, urinary RBC of at least 10 cells/HF, and eGFR (Table 2). The history of SLE had the highest adjusted ORs at 16.8. This finding may indicate that LN may occur after the diagnosis of SLE (2). There were 37 patients (54.4%) formerly diagnosed with SLE in our series prior to the diagnosis of LN by kidney biopsy (Table 1). In up to 60% of cases, LN developed within five years of SLE diagnosis (2).

Regarding the ANA test, 20% of patients with LN had a negative ANA test (Table 1). A previous review showed that ANA-negative lupus was reported in at least 55 cases (13, 14). The ANA test was not a significant predictor for LN in overall (P value 0.18, Table 2). Although in patients with an unknown history of SLE, ANA was the only predictive factor for LN in this study (aOR of 14.5). This finding was suggestive that ANA may be used as a screening tool for SLE and LN in patients who underwent kidney biopsy for the first time (15). Only half of the patients with LN by kidney biopsy had history of previous SLE (Table 1). We would recommend the ANA test for all patients performing kidney biopsy regardless of history of SLE.

Presence of urinary RBC, particularly RBC cast, usually indicates glomerular diseases. A previous study showed that RBC cast is significantly related to SLE renal relapse (16). However, the urinary RBC in this study was not defined as RBC cast; just urinary RBCs by microscopic examination with a high-power field. We believed that this predictor was associated with high the proportion of LN class IV patients in this study (67.6%) (17, 18).

Even though LN may turn into end stage renal disease (2), the eGFR in the LN group was higher than in the non-LN group (79.0 vs. 62.3 mL/min), as shown in Table 1. After adjusting for other factors, eGFR was a significant independent factor for LN. A 1 mL/min increase in eGFR leads to a 2% increase in the chance of LN increases by 2%. This finding may indicate that LN in this study may not be severe or may be less severe than the non-LN group. Several factors may be associated with poor renal function in LN including serum anti-C1q antibodies and antiphospholipid antibodies (18-20). Additionally, patients in the non-LN group were mostly steroid resistant or had severe primary glomerular disease. The eGFR may be higher in this group than in the LN group.

There are some limitations in this study. First, the results of this study may not be generalizable to other populations. As mentioned earlier, patients in the non-LN group or with primary glomerular diseases were mostly steroid resistant. Those patients were referred to our center from all over northeast Thailand. Second, several factors were not included in this study including clinical factors of SLE such as time or status of SLE and results of serological tests for SLE (i.e. antiphospholipid antibodies). The predictors in this study were basically simple clinical factors predictive of LN which may be useful for those in settings with limited resources. Finally, the results of this study are not specific to any types of LN but most of the patients had class IV and IV plus V (67.6%).

The authors gratefully thank Mr. Dylan Southard (USA) for his kind review of the manuscript. The authors also would like to thank Sleep Apnea Research Group, Research Center in Back, Neck and Other Joint Pain and Human Performance, Research and Training Center for Enhancing Quality of Life of Working Age People, and Research and Diagnostic Center for Emerging Infectious Diseases, Khon Kaen University, Khon Kaen, Thailand for the support.