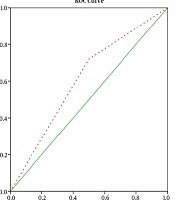 The present study aimed to assess the role of ultra-sonography in acute and chronic renal pathologies.

In this study, 29 patients with parenchymal kidney disease referred to Nephrology Department of Imam Reza Hospital, Tabriz, Iran, participated. The patients’ demographic information, internal diseases, kidney diseases, and other medical conditions were recorded. Then the Doppler and gray scale sonography were performed for both kidneys. Biopsies were taken from patients and were then compared with sonographic findings. The data were analyzed with SPSS software version 22.

According to pathologic findings, 69% of renal diseases was acute, and 31% of the diseases were chronic. According to the results of Gray Scale ultrasonography, there was a significant correlation between parenchyma thickness, cortex echogenicity (qualitative), medula echogenicity (qualitative and quantitative), and corticomedullary differentiation (quantitative) with pathologic findings (P < 0.05). Furthermore, no significant correlation was observed between the length of the kidney, cortex echogenecity (quantitative), and cortico-medullary differentiation (qualitative) with pathological findings (P < 0.05). In addition, there was a significant correlation between RI and pathologic findings based on Doppler ultrasonography (P < 0.05).

According to the results of this study, ultrasonography and color Doppler would be useful as an assistance and non-invasive method for the diagnosis and differentiation of the conflict site and the type of pathology involved in all parenchymal kidney disorders

Acute kidney injury (AKI) is an important and devastating disorder, whose incidence has increased in recent years due to an increase in the predisposing conditions (1). AKI is associated with many complications and is considered an independent risk factor affecting the mortality rate among hospitalized patients (2). The prognosis of this disease varies depending on the patient's clinical condition, comorbidities, severity of the disease, and geographical factors. More importantly, AKI may lead to chronic kidney disease, posing a major burden on the health systems (3).

The rapid diagnosis and use of appropriate diagnostic techniques to determine the specific cause of renal failure, which require specific treatments and interventions, are essential to prevent irreversible damages to the kidneys (4). Different methods such as serum creatinine level, urine sodium, various biomarkers, ultrasound, and the others are being adopted for the diagnosis of this condition.

Ultrasound is widely used in studying patients with renal failure. Regarding the ultrasound imaging, information such as the status of the collecting system, size of kidneys, parenchymal thickness, echogenicity, color Doppler examination of morphology, function of intraparenchymal vessels, and decrease or absence of blood flow in kidneys are of concern (5, 6). Such information reveals whether renal failure is acute or chronic (7). Moreover, the need for biopsy can be determined based on this information. There have also been many attempts to determine the type of kidney involvement according to the ultrasound findings. For example, decreased renal cortex thickness and decreased renal size may be caused by tubular atrophy (8). Unfortunately, our understanding regarding the significance of renal cortical thickness and the association between renal size and renal parenchymal disorders is limited. In other words, there is currently no precise measure for the renal ultrasound to distinguish the pathology of the kidneys in the cases of renal failure and involvement site (i.e., glomerular involvement, tubular involvement, interstitial or vascular involvement) (8).

Accordingly, this study aimed to examine the correlation between sonographic and color Doppler findings with urinary sediment and pathologic findings in parenchymal kidney disorders in order to differentiate chronic and acute renal damages.

The present cross-sectional study was performed at a referral medical educational center. Twenty-nine patients with unexplained renal damages were included in the study, from all of whom a biopsy sample was taken. Exclusion criteria were a predetermined pathology, unstable patients, patients with preexisting diseases, previously-documented renal diseases such as diabetes, hypertension, and rheumatic diseases, family history of congenital renal anomalies, and unwillingness to participate in the study. Patients with anomalies in their livers and spleens were also excluded since these organs were used as a reference for renal imaging.

3.2. Renal Imaging and Other Diagnostic Procedures

All the patients underwent ultra-sonographic imaging performed by a 4.0-MHz curvilinear probe and a LOGIQ C5 Premium ultrasound machine (General Electric Healthcare, Zipf, Austria). The imaging was performed by a radiologist with more than 10 years of experience in renal imaging. To reduce intra-observer reliability rate, the imaging was performed two times, and the mean of the reported values was considered in the final analysis. Renal length, parenchymal thickness, cortical echogenicity, and medulla echogenicity were then determined. Similarly, radiological assessment was conducted twice, first a qualitative assessment and then a quantitative assessment. The kidneys were also examined to detect the existence of hydronephrosis and altered corticomedullary differentiation.

In the same day when the sonography was performed, urine samples were taken from the patients, and they underwent biopsy the next day. Biopsy specimens were taken by an expert nephrologist through having local anesthesia.

Statistical analysis was performed with SPSS software. Regarding the quantitative data, KS test was run to assess the distribution of the data, and, depending on its result, t-test and Man-Whitney U test were then performed. To analyze the qualitative data, chi-squared test and Fisher’s exact test were utilized. P < 0.05 was considered as the level of significance in all the analysis steps.

The present study was approved by the Ethics Committee of Tabriz University of Medical Sciences. All the patients signed written informed consent forms. This study was in compliance with Helsinki Declaration (Ethical code: 3442319).

Table 1. Diagnosis of Patients According to Pathologic Examinations

The mean length of the kidney in patients with an acute pathology was 114.25 ± 8.87 mm; however, it was 111.6 ± 17.61 for those with a chronic pathology. The difference between the two groups was not statistically significant (P = 0.6). The mean parenchymal thickness was 15.6 ± 2.13 mm in patients with an acute pathology and 13 ± 3.2 mm in the chronic group. The difference was statistically significant (P = 0.015), as shown in Table 2. As it can be seen, the cortex echogenicity and medulla echogenicity were not significantly correlated with the type of kidney pathology in the quantitative assessment. Table 3 summarizes the results of qualitative assessment. Unlike the quantitative assessment, cortex echogenicity was significantly different for the groups with acute and chronic kidney disease.

The sensitivity of the ultra-sonography technique in predicting the nature of renal pathology was 72%, compared to 50% specificity of this technique. The positive predictive value was 90%, and the negative screening value was 22.2%. Furthermore, the accuracy of sonography in determining renal pathology was 68.9%. The area under the ROC curve of the curve equaled 0.61 (Figure 1). Ultrasound and color Doppler are diagnostic methods used for the morphological evaluation of kidney diseases. The combined use of ultrasound and color Doppler imaging, including the measurement of the intraparenchymal resistive index (RI), is of great importance in the early evaluation of nephropathy. These techniques combined with other diagnostic tests can provide useful information on the pathological origin (9).

The results of our study showed that 69% of pathologic findings were in acute patients and 31% of pathologic findings were in chronic cases. Moreover, according to Gray Scale ultrasound, there was no significant relationship between parenchymal thickness, cortical echogenicity (qualitative), medulla echogenicity (qualitative), and distinctness of the corticomedullary junction (quantitative) with pathological findings. According to color-Doppler ultrasound, there was a significant relationship between RI index and pathologic findings.

In a study by Moghazi et al., the strongest correlation between sonographic findings and histologic findings was in the case of renal cortical echogenicity. Renal size was significantly correlated with glomerular sclerosis and tubular atrophy. In this study, renal size and renal echogenicity were not suitable predictors of irreversible injuries (10). On the other hand, Hricak et al. found out that kidney size was not correlated with histopathologic findings. Moreover, there was no significant relationship between the distinctness of the corticomedullary junction and type of renal disease with histopathology (11). This finding was also in agreement with the findings of the present study.

In a study on kidneys using Color-Doppler sonography, more emphasis is on the RI of the renal interlobular vessels, and the RI > 0.7 is considered abnormal. In Platt’s et al. study, the RI of renal arteries in patients with tubulointerstitial involvement was about 0.75 +/- 0.07; however, the RI in patients with glomerular involvement was 0.58 +/- 0.05. The obtained values were significantly different (12). We also found out that the RI index was a suitable factor in distinguishing various forms of chronic and acute renal pathologies, even though, we did not focus on the exact pathological classification of the lesions.

Samie Mahmoud et al. in their study on 32 patients with pathologically-proven renal lupus erythematosus concluded that there was a positive relationship between RI and renal biopsy classification in these patients. Accordingly, Color-Doppler plays an important role in the diagnosis of different types of lupus nephritis, and RI can be used as an indicator of disease severity in SLE patients with kidney involvement as such the use of RI as a marker in outcome evaluation and treatment is suggested. The suggestion of this study, and the previous ones mentioned suggests that RI index should be further utilized in different clinical contexts

In a retrospective study on 207 patients undergoing ultrasound and kidney biopsy in 2005, Moghazi et al. concluded that ultrasound-based quantitative echogenicity was associated with four histological parameters (namely glomerular sclerosis, tubular atrophy, fibrosis, and interstitial inflammation). According to ultrasound results, renal length and parenchymal thickness were significantly correlated with most pathologic findings. In contrast, they were not significantly associated with interstitial inflammation (10). These findings were in contrast with those of the present study since no relationship was found between pathologic involvement of kidney and renal dimensions. This could be attributed to many factors, the most remarkable of which is patient selection. In their study, most patients were selected from those with established and long standing kidney disease; however, our patients were selected from those with established but recently-diagnosed pathologies. Furthermore, the small number of patients included in the present study could be another factor effecting the results.

In contrast to the present study, Lee et al. (2017) in their study found a direct relationship between the severity of renal echogenicity based on ultrasound and pathologic findings including fibrosis and interstitial inflammation and tubular atrophy; however, there was no correlation between severity of renal echogenicity and glomerular changes (14). These findings are also in general agreement with the present study; however, we never compared pathologies based on their histopathologic classification. Since specific kidney alterations such as fibrosis and atrophy are associated with chronic conditions, the findings could be interpreted and compared with those of the present study. As one of the limitations of this study, although such generalizations may be possible in chronic kidney conditions, the same is not true for acute lesions with minimal change in kidney cellular architecture.

In conclusion, ultrasonography and color Doppler would be useful as an assistance and non-invasive method for the diagnosis of the causes of either acute or chronic renal injuries. Qualitative assessment is more beneficial in this regard. More studies are recommended to determine the exact benefits of qualitative and quantitative sonographic assessment as well as the causes of renal pathologies. More importantly, the relationship between renal ultra-sonographic changes and renal pathologic changes is not well understood, and, to the best knowledge of the researcher, no study has addressed this issue. The findings of the present study should be interpreted in this context and applied for initial assessments of patients with previously obscure renal diseases; however, the results should not be generalized to specific renal conditions.

This study was extracted from a thesis by Dr. Bagher Gharebaghi to receive a specialty degree in diagnostic radiology residency program. This study was funded by the Deputy of Research at Tabriz University of Medical Sciences. We also would like to thank Dr. Bookani and Dr. Aminorroaya for their moral support.