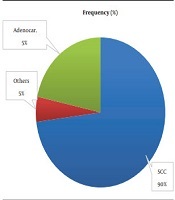 Seroepidemiological Study of Epstein-Barr Virus in Patients with Head and Neck Tumors at Shahid Rajaee Hospital in Babolsar, Iran

Epstein-Barr virus (EBV) is a herpes virus, which is the cause of infectious mononucleosis. Seroepidemiological studies show that more than 95% of adults in the world are infected with this virus. This virus is a modifying virus that is associated with some malignancies such as Burkitt lymphoma, tumors in HIV-infected patients, Hodgkin's lymphoma, head and neck tumors, and T-cell lymphoma.

This study aimed to determine the prevalence of EBV and its relation to the type of cancer in patients with head and neck tumors, which were treated in the years 2015 to 2016 at Shahid Rajaee Radiation Hospital in Babolsar.

During one year, all patients with head and neck tumors were monitored, and finally, a total of 37 patients who had pathologically confirmed diagnoses were entered into the study after obtaining written informed consent. In this descriptive study, specific anti-EBV viral capsid antigen (VCA) immunoglobulin M (IgM) and IgG antibodies were evaluated using enzyme-linked immunosorbent assay (ELISA). Also, other patients' information was obtained from their records.

The mean age of the patients was 59 years, and the number of men (70.23%) was higher than that of women (29.77%). Regarding the histopathology information and the frequency of tumors, most of the patients had squamous cell carcinoma (SCC) (73%) in the sites of the nasopharynx (27.02%) and pharynx (18.91%). The results of the ELISA test showed that IgG antibodies were positive in most of the patients (86.5 %). About the relation between the sites of the tumors and the IgG antibody, all patients (100%) with nasopharyngeal, tongue, and lips cancers were positive while they were the least in pharyngeal cancer (5.4%).

This study showed that a significant number of patients with head and neck tumors (86.5%) were infected with this virus, which indicates that EBV as a carcinogenic agent in head and neck tumors has a high prevalence in our society and requires preventive and therapeutic actions.

Head and neck tumors are the sixth most common cancers with an annual incidence of 650,000 new cases in the world, representing an estimated 6% of all cancers. These malignancies are the epithelial neoplasms located on the upper part of the aerodigestive tract that includes paranasal sinuses, nasal cavity, pharynx, oral cavity, hypopharynx, larynx, esophagus, and the cervical area. Pathologically, the most common carcinoma of this area is squamous cell (SCC) (1). Tobacco, smoking, alcohol consumption, vitamin A and iron deficiency, and some types of viruses such as the human papilloma virus (HPV) and Epstein-Barr virus (EBV) are the most common risk factors for these malignancies (2).

According to the studies by Agency for Research on Cancer (IARC), EBV is classified in group 1 of carcinogenic substances, which indicates that the virus plays an important role in the development of cancer (3). This virus is a modifying virus that is associated with some malignancies such as Burkitt's lymphoma, tumors in HIV-infected patients, Hodgkin's lymphoma, nasopharyngeal and other head and neck cancers, and T-cell lymphoma (4). Several studies have demonstrated that EBV is in association with head and neck tumors (5, 6).

As a herpes virus, EBV is the cause of infectious mononucleosis. Seroepidemiological studies show that more than 95% of adults in the world are infected with this virus (4). Generally, the symptoms of infectious mononucleosis are usually seen 4 - 6 weeks after EBV infection. Severe fatigue, headache, body pain, fever, inflammation, swelling of the throat, inflammation of the lymph nodes in the neck and armpit,splenomegaly, hepatomegaly, and rash are the symptoms of EBV-related infectious mononucleosis. The enlargement of the liver and spleen has a low incidence, but in some people, fatigue is the result of the illness. After infection with EBV, the virus remains in the body in the latent state (inactive). In some cases, the virus may be reactivated, which does not always cause symptoms, but in people with a weakened immune system, it is more likely to detect the symptoms (4, 7).

As known, EBV is commonly transmitted through body fluids, especially saliva. The virus can also be transmitted through blood and body secretions at times of sex, blood transfusion, and transplantation. The virus will survive on objects at least as long as the object is wet. When an individual first encounters an EBV virus (initial EBV infection), the virus will be transmitted to others for weeks afterward, even before the symptoms start to show up. The virus remains inactive after being transmitted to the body (passive) and can be transmitted to others at the time of activation (regardless of the time elapsed since the initial infection). It is challenging to diagnose the infection when symptoms are similar to other diseases. Infectious mononucleosis is detectable by the patient's symptoms, but some laboratory tests such as blood tests and antibodies’ detection tests such as viral capsid antigen (VCA), early antigen, and EBV-associated nuclear antigen are usually used for diagnosis (4, 7).

Considering that the role of EBV in tumor necrosis is not well defined, we tried to first examine the prevalence of EBV infection in patients with head and neck tumors and second, find a meaningful relationship between the types of cancer and EBV.

This descriptive study was conducted on patients with head and neck tumors at Shahid Rajaee Hospital in Babolsar. During one year, all patients with head and neck tumors were monitored, and finally, a total of 37 patients with pathologically confirmed diagnoses were entered into the study after obtaining written informed consent. A blood sample was taken from each patient and transferred into the Cellular and Molecular Biology Research Center of Babol University of Medical Sciences for further analysis. In this study, specific anti-EBV VCA IgM and IgG antibodies were detected by enzyme-linked immunosorbent assay (ELISA). The ELISA test is a standard method for the detection of the virus in blood and saliva samples. Also, it is a useful method in hospitals, blood banks, and blood transfusion organizations. In the ELISA method, the antibody is measured in the infected person (8). Other required information such as gender, age, and tumor location was obtained from the patients' records.

The frequencies are shown with 95% confidence intervals (95% CI). Differences between groups were assessed using the chi-square test. For statistical analysis, SPSS version 16 software was used. The level of statistical significance was set at α = 0.05.

3.1. Age and Sex Distribution of Patients

3.2. Frequency of Head and Neck Tumors Based on Histology

Histopathologically, as shown in Figure 1, the majority of the patients had squamous cell carcinoma, followed by adenocarcinoma. 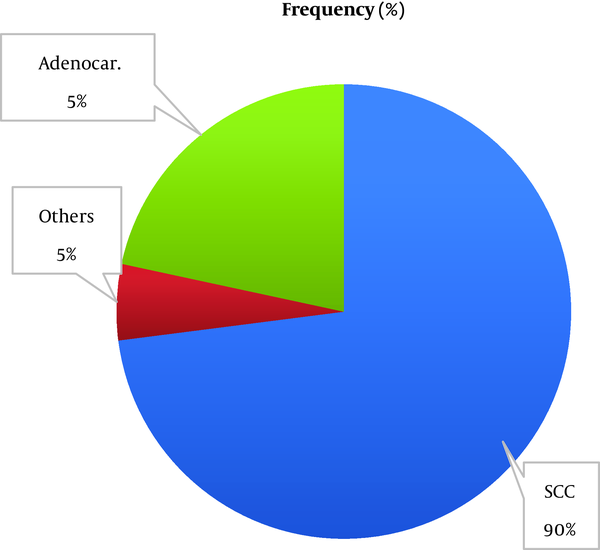 Frequency of head and neck tumors based on histology

3.3. Frequency of Head and Neck Tumors Based on Location

According to the information from patients' records, as shown in Figure 2, most of the patients had nasopharynx (27.02%) and pharynx (18.91%) cancers. 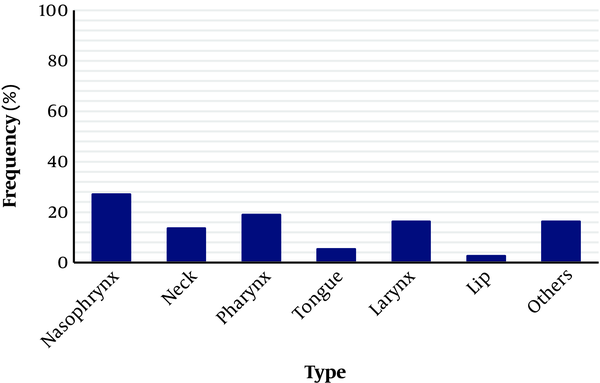 Frequency of head and neck tumors based on location

3.3.1. Frequency of Head and Neck Tumors Based on Sex and Location

Regarding the location of the tumors, as shown in Figure 3, the majority of the patients were males. In the areas of lips and tongue, the frequency of tumors was more in women than in men. As shown in Figure 3, this difference was significant (P < 0.05), which is probably because of the low sample size. 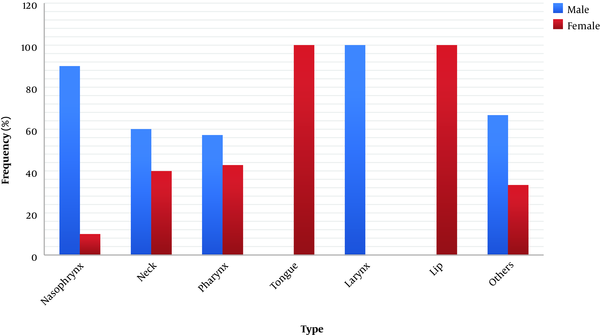 Frequency of head and neck tumors based on sex and location

The results of the antibody test for EBV were positive in 86.5% of the patients, indicating a high incidence of infection in patients with head and neck tumors. Since this virus is a carcinogenic agent in the development of head and neck malignancies, it requires effective prevention and therapeutic actions in our society.

About the relationship between tumor location and IgG antibodies against EBV, as shown in Figure 4, the IgG EBV antibody was positive in all patients with nasopharynx, tongue, and lip tumors whereas, in patients with pharyngeal cancer, only 57% had a positive result. 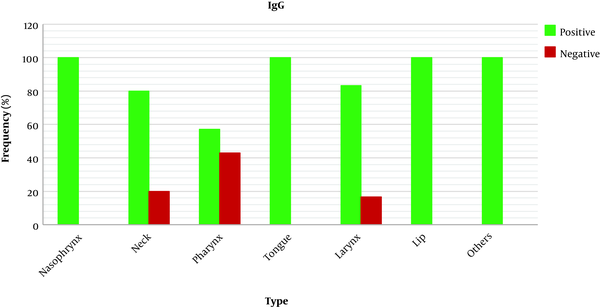 The relation between tumor location and IgG antibody

This virus is a modifying virus that is associated with some malignancies such as African Burkitt's lymphoma and nasopharyngeal carcinoma. Several researchers have assessed the carcinogenic effect of this virus. However, this effect is not well known (9, 10). In a review study by Goldenberg et al. (5) on the association of head and neck tumors with EBV, the results showed that biochemical and immunological examinations confirmed the relation between EBV and certain types of nasopharyngeal tumors in both high-risk and low-risk regions of the world. In a study by Chow et al. (11), the results showed that the presence of viral genomes of EBV could increase the proliferation of neoplasms. These findings can be a strong indication of the relation between EBV and its relevant tumors. In another study by Maeda et al. (6), histopathologic specimens of 45 patients with SCC in the oral region were evaluated to assess the presence or absence of EBV infection using the PCR method. The results of their study showed that 64.4% of the patients were infected. The results of another study by Horiuchi et al. (12) showed the carcinogenicity of EBV in oral cancers. In this study, the PCR method was used to examine the histopathologic samples of 79 patients. In a review paper by Prabhu (3), published in 2016, the results showed that EBV is one of the most important viruses in the development of lymphoid and head and neck tumors including lymphoma and nasopharyngeal carcinoma. However, clinically, these lesions do not have a specific property that can be used to classify them as dependent on EBV. Overall, the results of the studies presented in this section indicate the carcinogenicity of EBV in tumors of the head and neck, which our study also confirms this issue.

Other studies showed the relationship between EBV and oral carcinoma (18). In one of these studies, Cruz et al. (19) evaluated the prevalence of EBV in SCC tumors, premalignant lesions, and normal oral mucosa using the PCR method. The results of this study showed that the virus was present in all patients with oral carcinoma. Shimakajge et al. (20) evaluated the association between EBV infection and nasopharyngeal and hypopharynx carcinomas. The results of immunofluorescence staining and RT-PCR showed that EBV plays an important role in the development of nasopharyngeal and hypopharynx carcinomas like nasopharyngeal carcinoma. In our study, the results of IgG antibody testing in the pharynx region were positive only in 57% of the patients.

Copyright © 2021, Reports of Radiotherapy and Oncology. This is an open-access article distributed under the terms of the Creative Commons Attribution-NonCommercial 4.0 International License (http://creativecommons.org/licenses/by-nc/4.0/) which permits copy and redistribute the material just in noncommercial usages, provided the original work is properly cited.
download pdf 174.17 KB Peer Review Comments ( 98.58 KB) Get Permission (article level) Import into EndNote Import into BibTex
Number of Comments: 0