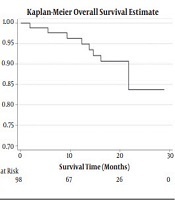 Evaluation of Clinical and Pathological Characteristics and Routine Treatment of Patients with Prostate Cancer in Six Referral Centers in Iran: A Pilot Non-interventional, Multicenter Study

Prostate cancer is the second most common malignancy among Iranian men after stomach cancer. To understand the nature of the disease and plan and develop a population-based cancer registry, it is essential to recognize the clinical and pathological characteristics of the tumors, as well as treatment results.

The present study aimed to evaluate the clinical and pathological characteristics of prostate cancer and evaluate the routine practice, including treatment outline and results of treatment in six referral centers in Iran.

This prospective observational pilot study recruited patients with prostate cancer between April 2015 and October 2015 at six referral centers in Iran. The participating physicians included consecutive patients according to inclusion criteria. Demographic, clinicopathologic, and treatment data were collected by the physicians using an electronic case report form (eCRF). The patients were followed for 18 months, and during this period, four visits were scheduled for each patient to collect the data.

This pilot registry could serve as a valuable tool for the development of a comprehensive nationwide registry for patients with prostate cancer in Iran.

To understand the nature of the disease and plan and develop a population-based cancer registry, it is essential to recognize the clinical and pathological characteristics of the tumors, as well as treatment results.

The present study aimed to evaluate the clinical and pathological characteristics of prostate cancer and evaluate the routine practice, including treatment outline and results of treatment in six referral centers in Iran. This study can be used as a foundation for establishing a population-based cancer registry in Iran.

This observational pilot study recruited patients with prostate cancer between April 2015 and October 2015 at six referral centers in Iran. Each participating physician was asked to include consecutive patients according to inclusion criteria at each center during the recruitment period. This consecutive recruitment helped reduce bias related to physician-led patient selection. Each physician recruited patients until the targeted number of patients at his/her center was reached.

This was an observational and non-interventional study to evaluate the impact of a predefined therapy or procedure and did not impose any additional procedures, assessments, or changes to the routine management of the patients. Treatment or any kind of interventional approach to the patients was totally at the physician’s discretion. The design of this registry mirrors the real-life characteristics of these patients.

Eligible cases were non-metastatic, newly diagnosed patients with prostate adenocarcinoma who had confirmed pathology reports and had not received any treatments for prostate cancer and were going to be treated at one of those six referral centers. Informed consent was obtained from all participants. Metastatic patients at presentation and patients with a history of previous cancers (any type apart from non-melanoma skin cancer) were excluded from the study. Physicians were asked to record data for study endpoints assessments at baseline, 4 - 6 months (± 1 week), one year, and 16 - 18 months after the initiation of the study.

By collecting the preliminary data on routine schedules at the centers, four visits were arranged for the patients:

- Third visit (12 months after the first visit): Treatment outline data collection, treatment sequence, and any changes in the planned treatment were recorded at visit 3.

Adverse events were evaluated during the study course. They were recorded in a pre-specified form to document critical information, including the description of events, date, relation to treatment, the intensity of the event, and outcome. All the adverse events were collected by the investigators and reported to Sanofi within an expedited period.

The data were collected and noted in the electronic case report forms (eCRFs) by the physicians. The e-CRF was designed with the cooperation of a team of relevant experts. The server was placed in a secure area, and the users had their own sealed user/password with defined accessibility to the e-CRF. The data had different levels of access with the anonymous patient and personal information. The completed eCRFs were extracted from the server platform of the database and sent to the data management unit at the end of the study.

Data collection and validation procedures have been described in detail in the appropriate operational documents. Patients who did not complete the study and those for whom no endpoint data were available were considered as lost-to-follow-up. Patients could withdraw from the study follow-up schedule at any time, irrespective of the reason.

Six referral centers from different parts of the country participated in this pilot study to implement an e-registry database for prostate cancer patients. For this pilot study, it was planned to include 100 patients. The referral centers were distributed in different regions of the country: (1) two centers in Tehran; and (2) four centers in four other provinces (Khouzestan, West Azarbaijan, Isfahan, and Fars).

Patients’ characteristics were summarized into the median and mean (standard deviation) for quantitative variables; frequency and proportion were used for the description of categorical variables. Survival time was estimated from the diagnosis of prostate cancer until the event. Censorship status was death, relapse, second malignancy, metastasis, and lost-to-follow-up. The patients’ overall survival (OS) and disease-free survival (DFS) were estimated using the Kaplan Meier survival function. For OS estimation, death from any cause was considered as failure and otherwise was considered as censored observations. For DFS estimation, failure was defined as relapse, metastasis, and second malignancy, while death at survival time and censored survival time were assigned to patients with lost-to-follow-up. The P values of less than 0.05 were considered significant. The STATA version 14 software was used to analyze the data.

A total number of 102 patients from six centers in five different cities of Iran were included in the study. The median follow-up duration in the study was 17 months, and the mean (SD) age of the participants at the baseline visit was 68.7 (9.30) years with a minimum and maximum of 50.8 and 108.7 years, respectively. The majority (94 patients, 92.2%) of the patients were married. Sixty-seven (65.7%) patients were diagnosed initially by needle biopsy as the first diagnostic method, 23 (22.5%) patients by radical prostatectomy, and 12 (11.8%) patients by open prostatectomy. The mean Gleason score of the patients was 7.4 ± 1.4, ranging from 2 to 10. Clinicopathological data are shown in Table 1. Laboratory data of the cases at different visits are demonstrated in Table 2.

The frequency of each treatment modality at different follow-up visits is given in Table 3. The most frequently used chemotherapy and antiandrogen drugs were docetaxel and triptorelin, respectively.

Table 3. Frequency of Different Treatment Modalities in Different Visits a

a 67 patients (65.6%) had undergone needle biopsy before the initiation of treatment. 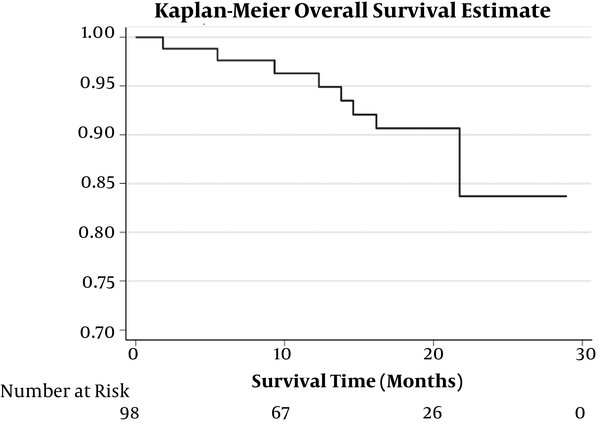 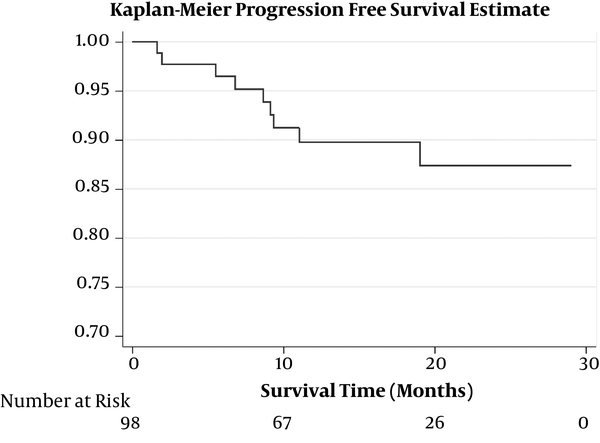 Several studies have been conducted on the clinical and pathological characteristics of tumors in Iran (2-4). However, most of them are not prospective and are not comprehensive enough to fulfill registry purposes.

Various clinical and pathologic factors, including age, performance status (PS), comorbidities, prostate-specific antigen (PSA) levels, T and N stage of the disease, degree of cell differentiation, vascular invasion, condition of hormonal receptors, tumor size, etc. have significant impacts on the prognosis of prostate cancer. Selecting the proper treatment modality for prostate cancer depends not only on the above-mentioned factors, especially the tumor stage, but also on the epidemiologic considerations and natural history of the disease, as well as the cost-effectiveness evidence for different treatment modalities based on available resources.

Management options for men with prostate cancer include watchful waiting, active surveillance, prostatectomy, high‐intensity focused ultrasonography, radiotherapy, brachytherapy, and androgen deprivation therapy, and the majority of patients often receive combination therapy (5). The cancer registry plays an important role in capturing data that affect cancer treatment and surveillance, and serves as a foundation for cancer research to plan and evaluate cancer prevention and control interventions. Furthermore, it can be a basis for developing national clinical guidelines.

A Danish study in 2008 assessed the characteristics of patients with prostate cancer and their treatment results for three decades in three provinces of Denmark. This study demonstrated that during the last two decades of the 20th century to the first decade of the 21st century, patients with prostate cancer in Denmark had been gradually diagnosed in lower stages of the disease and had a higher survival rate (6). Developed countries dedicate a large budget to such studies. A recent report from Australia stated that prostate cancer was the costliest type of cancer, whose economic impact for the years 2006–2016 was estimated to be more than twice that of breast cancer and colorectal cancer, and more than three times that of lung cancer. They estimated that this trend was predicted to continue over the next 30 years (5).

Similar to other malignancies, collecting proper information might result in reducing the incidence and increasing the survival rate of patients with prostate cancer (7). This pilot study was based on a multi-institutional survey to collect data in the routine practice of physicians and on different treatment modalities used for prostate cancer patients in Iran. The incidence of severe adverse events was 11.76% among 102 patients. This result was not consistent with previous findings reported by Bryant et al. and Hiromistu (8, 9). In a study by Coleman et al. (10), the five-year survival of prostate cancer patients had a wide range of 40 - 80% in various countries. Especially in Tyrol (Austria), the survival rate was more than 80% after the implementation of intensive PSA screening in 1992. The rates of five-year OS in the Hiromistu et al. (9) study were 98.4, 96.8, and 95.2% for low, moderate, and high-risk groups, respectively. In recent decades, intensity-modulated radiation therapy (IMRT) for localized prostate cancer has been advancing rapidly worldwide.

Desirable data with IMRT for prostate cancer have been accumulated, and IMRT with or without androgen deviation therapy is becoming an imminent treatment modality not only for patients who decline operation or are medically inoperable, but also in cases who are fit for surgery, as it has been shown in several trials that the results of definitive radiotherapy are comparable to those of surgery. When comparing different treatment modalities or different radiotherapy methods with each other, assessing the cost-effectiveness and quality of life (QOL) is of paramount importance. Unfortunately, we were not able to evaluate these parameters.

Due to the essence of pilot registries, the results and administrative challenges of this study could be considered as a base and framework for the development of the final national registry at the next phase, particularly with respect to developing electronic data capture infrastructure and systems with good compliance to international guidelines and appropriate preparation of essential documents.

The authors thank the patients, the participating investigators in each center, and the clinical trial staff of Sanofi Aventis who conducted this study.

Copyright © 2021, Reports of Radiotherapy and Oncology. This is an open-access article distributed under the terms of the Creative Commons Attribution-NonCommercial 4.0 International License (http://creativecommons.org/licenses/by-nc/4.0/) which permits copy and redistribute the material just in noncommercial usages, provided the original work is properly cited.
download pdf 227.14 KB Get Permission (article level) Import into EndNote Import into BibTex
Number of Comments: 0