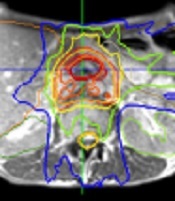 A 66-year-old man with pancreatic cancer was referred to our institution for local recurrence after failure of surgical resection and second-line chemotherapy. He did not want to undergo further chemotherapy, so high-dose MRI-guided adaptive radiation therapy was performed in daily doses of 2.5 Gy to a total dose of 70 Gy over a period of 5.5 weeks. Three months after radiation therapy, the recurrent tumors disappeared and his CA19-9 level was within normal range without chemotherapy. There were no adverse events during treatment and three months of follow-up.

Despite advances in chemotherapy and surgery, the prognosis of pancreatic ductal adenocarcinoma (PDAC) remains poor even after curative resection. Multiagent chemotherapy is usually offered for recurrent PDAC, but the standard treatment for patients with locally recurrent PDAC has not yet been established (1, 2). High-dose MRI-guided radiation therapy for locally advanced PDAC has been suggested to improve overall survival and local control, relative to patients receiving lower radiation doses without increasing the rate of serious gastrointestinal toxicity (3). There have been no reports of MRI-guided radiation therapy for local recurrence after curative surgery and chemotherapy for PDAC. Here, we report a case of locally recurrent PDAC treated with high-dose fractionated MRI-guided adaptive radiation therapy.

A 66-year-old man with a 4-year history of PDAC was referred to our institution for local recurrence after failure of surgical resection and second-line chemotherapy. The patient underwent pancreaticoduodenectomy and segmental resection of the superior mesenteric vein for PDAC in the head of the pancreas four years ago (pT4N1M0, AJCC 7e). The surgical margins were considered to be microscopically positive, and single-agent gemcitabine was administered for six months after surgery. He was subsequently followed up with no further treatment upon the patient’s request, but two years after surgery, his serum CA19-9 levels increased gradually (50 - 60 U/mL, normal: < 37 U/mL) and chemotherapy with S-1 was initiated. His CA19-9 levels decreased and remained at around 50 U/mL, but gradually increased to 111.3 U/mL two years after the start of chemotherapy with S-1. Whole-body contrast-enhanced CT showed no distant metastasis, but soft tissue lesions appeared in the tumor bed and around the superior mesenteric artery, infiltrating the mesenteric and para-aortic regions (Figure 1A). The tumors near the superior mesenteric artery were hyperintense relative to the adjacent muscles on T2-weighted MRI (Figure 1B), while diffusion-weighted image (DWI) showed multiple hyperintense lesions in the tumor bed and along the superior mesenteric artery (Figure 1C). These lesions were diagnosed as local recurrence, as they could not be detected by repeated postoperative CT and MRI. Endoscopic biopsy of the tumors near the superior mesenteric artery was considered technically difficult. 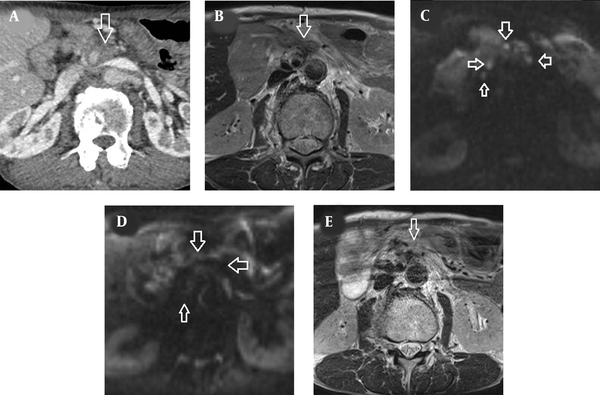 CT and MRI findings of locally recurrent pancreatic cancer. (A) Contrast-enhanced CT scan showed tumor lesions surrounding the superior mesenteric artery (arrow), which infiltrated the mesentery and the para-aortic region. (B) The recurrent lesion (arrow) was hyperintense relative to the adjacent muscles on T2-weighted MRI. (C) Diffusion-weighted image obtained with b factor of 800 s/mm2 showed multiple nodules (arrows) with high signal intensity compared with the spinal cord. (D) Three months after radiation therapy, there was no hyperintense tumor in the tumor bed and around the superior mesenteric artery on T2-weighted MRI (arrow). (E) Three months after radiation therapy, the multiple hyperintense nodules on diffusion-weighted image disappeared (arrows).

The patient was suggested combination chemotherapy, but he did not agree. After the protocol was approved by the institutional review board, he was treated with MRI-guided adaptive radiation therapy. Written informed consent was signed by the patient. All procedures were carried out in accordance with the ethical standards of Helsinki Declaration and its later amendments or comparable ethical standards. Since the chemotherapy with S-1 failed to control the recurrent tumor, the chemotherapy was discontinued. As adaptive two-step intensity modulated radiation therapy (IMRT), true fast imaging with steady precession (FISP) MRI was performed before MRI-guided IMRT for the initial plan of 40 Gy/16 fractions and during treatment for the boost plan of 30 Gy/12 fractions with a total dose of 70 Gy. 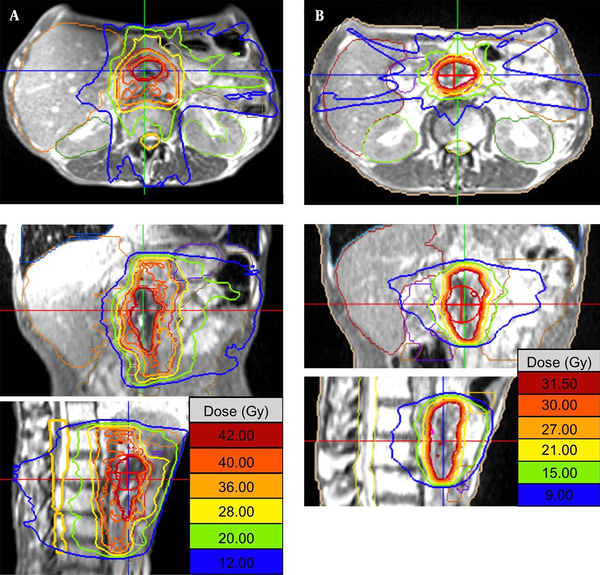 Although the recurrence rate of PDAC after curative resection is as high as 85%, optimal treatment for locoregional recurrence has not been established (4). Systemic chemotherapy may be given to treat recurrent PDAC, but the median survival is usually less than one year (1, 2, 4). In this case, the recurrent PDAC was ineffective with second-line chemotherapy. We considered whether to choose the best supportive care or palliative radiation therapy. Since MRI-guided radiation therapy for locally advanced PDAC has been shown to improve overall survival and local control without increasing toxicity (3), we thought that it could be applied to local recurrence. KRAS G12C inhibitors may have helped to some extent to enhance the therapeutic effect, but KRAS G12C mutation was not detected in this case (5). Another treatment option is immunotherapy using immune checkpoint inhibitors such as pembrolizumab (6). However, the anti-PD-1 antibody pembrolizumab was not indicated for this patient because the tumor was microsatellite instability-low PDAC.

There are several limitations in this study that could be addressed. First, this is a single case study and it cannot be generalized to others without further scientific verifications. However, considering that MRI-guided adaptive radiation therapy is a new treatment method and has been shown to be effective for unresectable pancreatic cancer, it is important to try to expand its indications to include postoperative local recurrence. Based on previous reports and the results of this case, the most appropriate case for MRI-guided adaptive radiation therapy would be local recurrence without distant metastasis (2-4). Secondly, the follow-up period is short, and its long-term safety and efficacy are unknown. But, the purpose of this study was to present a proof of principle of high-dose MRI-guided adaptive radiation therapy for locally recurrent pancreatic cancer. Large-scale prospective studies will be needed to demonstrate safety and efficacy.

Copyright © 2022, Reports of Radiotherapy and Oncology. This is an open-access article distributed under the terms of the Creative Commons Attribution-NonCommercial 4.0 International License (http://creativecommons.org/licenses/by-nc/4.0/) which permits copy and redistribute the material just in noncommercial usages, provided the original work is properly cited.
download pdf 6.81 MB Get Permission (article level) Import into EndNote Import into BibTex
Number of Comments: 0