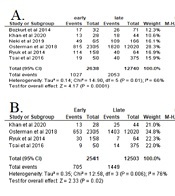 According to the World Health Organization, colorectal cancer (CRC) is the third most prevalent cancer globally, with the highest mortality rate after lung cancer. Some studies predicted risk factors provoking CRC recurrence. However, no single study discussed CRC recurrence.

This study aimed to quantitatively estimate the influence of several risk factors toward early recurrence of CRC.

We utilized four medical databases, including Pubmed, Cochrane, Wiley library, and ScienceDirect, and a range of literature searches between July to October 2020 with output study, odds ratio (OR), and some risk factors. We used PRISMA protocol along with several relevant keywords with NOS method was utilized to assess the quality of the study. Fixed- and randomized effect model were utilized to control each numerical analysis’ bias.

Risk factors of earlier CRC recurrence were diversely reviewed. The elevation of post-operative CEA serum was assumed as the main factor in this study; however, most of the studied parameters were statistically significant.

Colorectal carcinoma or cancer (CRC) is a major health problem with an increasing rate per year and the third leading cause of cancer-related death worldwide (1) Regarding the highest incidence rate in South East Asia, Indonesia is ranked fourth (17.2 cases in 100.000 citizens) and placed second with 9.5% mortality rate from the entirety mortality rate by cancers (2, 3). In Indonesia, there were 34,189 new cases of CRC in 2020.1 According to the CRC treatment guidelines, resection surgery, neoadjuvant or adjuvant chemotherapy, and radiotherapy are the most recent approaches recommended to manage CRC. The management of CRC is determined by the cancer stage and patient-based considerations; however, resection surgery is practically indicated in almost all stages (4, 5). Adding adjuvant chemotherapy and/or radiotherapy to the definitive treatment is considered mandatory at some points mainly to complete the priorly-established management or prevent recurrences. However, the recurrence rate among post-treated CRC patients is still relatively high, ranging from 12.1 - 20.1% during 3 - 5 years of follow-up (6, 7).

The recurrence frequency and sites vary in CRC, with more than half of the recurrence cases occurring in the first two years of follow-up. In this regard, many factors affect the recurrence risk (8). According to the Japanese Society for Cancer of Colon and Rectal, tumor and neoplasm stage as well as the invasion of perineural and vascular tissue with or without elevated serum CEA and CA 19-9 generally play a pivotal role in the CRC recurrence risk. Such an effect can be either within the colorectal sites (local recurrence) or distant recurrence, mainly involving visceral organ (eg, the liver), in term of the incidence rate (9-12). The number of concurrence factors in each patient also determines the risk of early or late-onset recurrence as patients with two factors significantly are at a higher risk for earlier occurrence (13). We distinguished 'early-' or 'late-' recurrence to establish several risk factors for the early- and late-onset of the CRC recurrence among patients with prior surgical resection. Accordingly, clinical benefits of this intervention, including early prevention or higher awareness in the risky group, can be adopted in the treatment procedures.

The reporting items preferred in the Systematic Review and Meta-analyses (PRISMA) Protocol was assumed as the main study protocol. Following the study protocol advocation, this study was approved by the Ethics Committee of the Universitas Sumatera Utara.

In this review study, according to the PICO format, the eligibility criteria were as follows: Participants or populations (recurrence CRC of stage I-IV patients with a history of surgical resection and post-operatively confirmed as R0 in the histopathological diagnosis), Intervention or exposure (reported recurrence factor of each patient), Comparison-risk factors of CRC recurrence, and output-early and -late recurrence rates affected by measured risk factors. We investigated cohort, case-control, and cross-sectional studies in English, which were published in a peer-reviewed journal.

Several scientific databases, including Pubmed, Cochrane, Science Direct, and Wiley Library, were utilized in the literature searching phase in June 2020. We determined the search terms by establishing some representative keywords using Boolean logic, ie, ((colorectal OR colon OR rectal) AND (cancer OR neoplasm) AND (recurrence OR relapse) AND (resection OR operation OR surgery OR surgical) AND (tumor stage OR neoplasm stage OR CEA serum OR CA 19-9 serum OR perineural invasion OR vascular invasion)). In Cochrane and PubMed, we used advanced search features within the same search terms and excluded animal-based studies. The search of the paper titles and abstracts was used to screen all studies from the database

All eligible studies were quality-checked by the authors (A. M. M. and M. N. A. H.) using Newcastle-Ottawa Scale (NOS). The NOS modified was used to assess the quality of the cohort study in this meta-analysis. The modified Newcastle-Ottawa Scale assesses three different domains of quality studies: selection (4 items), comparability (1 item), and outcome (3 items). A star was given for each fulfilled domain criterion, except for the comparability domain. The total number of the stars can determine the total score of quality with a maximum of nine stars. Any discrepancy in each result was internally discussed with other authors to achieve the optimal interpretation of the included studies.

The quantitative syntheses of the selected studies was analyzed with Review Manager (RevMan) 5.2 software, and the mean difference was obtained to measure the overall effects. Chi-square was also used to determine the homogeneity of the findings, which might have affected the meta-analysis model (fixed effect for P > 0.05 and a random effect for P < 0.05).

About 1926 studies were found to be relevant to the concerned topic, of which six studies were included in this systematic review and meta-analysis after thoroughly consideration by applying the eligibility criteria and concordant with the established PICO (Figure 1). Those studies were remarkably different in terms of sample size, ranging from 72 to 14,325 individuals, with the male population being dominant. There were also differences in these studies in terms of the age group; however, most of the patients were below 65 years old. Table 1 presents the details of the selected studies. And as mentioned earlier, the second year after surgery has been used as a 'cut-off' point in determining the early and later recurrence of CRC. Henceforth, confirmed recurrence with less than two post-operative years was considered an early recurrence; otherwise, it was the late recurrence. The NOS quality assessment also confirmed the acceptable conditions of all studies to be reviewed (Table 1) (8, 14-18). 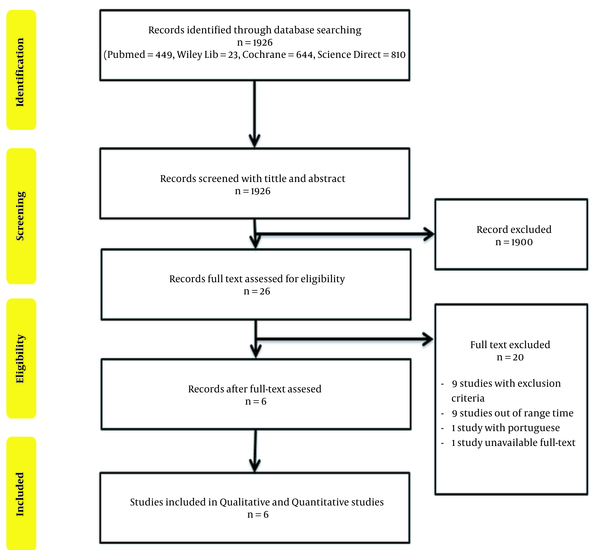 Search strategies as depicted by PRISMA flow-chart of this review.

Table 1. Specifications of Included Studies and the Results of Critical Appraisal a

Table 2 presents the quantitative results for the recurrence risk factors concerned in the selected studies.

The data collected from six studies were heterogeneous and analyzed with Random Effect Model (REM) (Figure 2A). The analyses of these studies revealed that vascular invasion in patients with CRC significantly increased the recurrence risk (P < 0.00001). Patients with confirmed vascular invasion in CRC were 2.3 times more likely to develop early recurrence after resection surgery (OR 2.3 (95% CI: 1.56 - 3.4)) (8, 14-18).

In two studies, all collected data were homogenous and analyzed with Fix Effect Model (FEM). The analyses revealed that higher regional node metastasis (N) in a patient with CRC significantly increased the recurrence risk (P < 0.00001). Patients with N2.N1 in the CRC histopathological assessment were 2.56 times more likely to develop early recurrence after resection surgery (OR 2.56 (95% CI: 1.41 - 4.62)) (8, 17) (Figure 3). 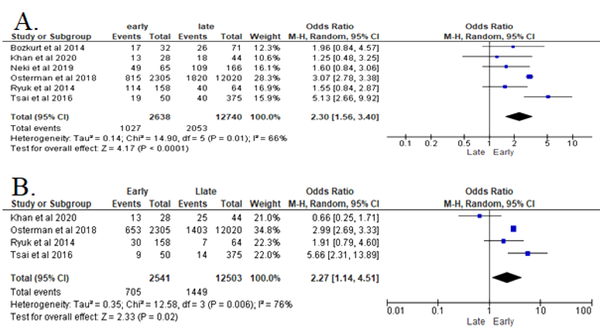 Forest plot of (A) Vascular invasion; and (B) Depth of invasion (T stage). 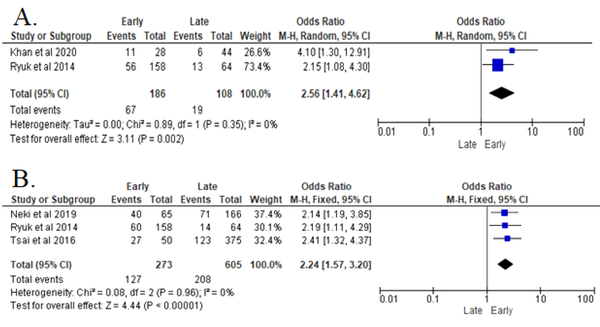 The analyses of two studies indicated that the pre-operative elevation of CA19-9 serum post-operatively had a particular effect on increasing the risk of CRC recurrence (P < 0.00001). In this regard, the risk was 3.03 greater in developing early recurrence after resection surgery (OR 3.03 (95% CI: 1.74 - 5.25) in the FEM analysis.

CRC as one of the most non-communicable diseases worldwide should be a priority to determine how to control the incidence or even the emerging recurrence rate of this disease worldwide (1). Resection surgery is the only curative measure of non-metastatic diseases, especially in patients with early-stage CRC. A report by Rodrigues et al., in 2017 mentioned that resection surgery had incidentally detected an occult recurrence of CRC with an incidence of 20.1% five-years post-procedure (7). However, so many factors may influence recurrence risk in patients with prior resection surgery.

According to our forest plots in the result section, some statistically remarkable factors have effects on the recurrence risk. Patients with elevated post-operative CEA serum had OR 5.97 (CI 95%: 3.04 - 11.75); hence, this factor was considered the most compelling risk factor. Moreover, patients with elevated CA 19-9 serum were 3.03 times more likely to develop early recurrence than patients with normal value pre-operative CA 19-9. Accordingly, laboratory values such as CA 19-9 and CEA serum play critical roles as the prognostic factors of recurrence and may act as a biomarker to detect or predict recurrence incidence in patients with surgically-treated CRC (19).

Vascular invasion is a remarkable risk factor of recurrence (OR 2.3 (CI 95%; 1.56 - 3.4)). This finding is in line with previous findings indicating vascular invasion as an important factor in determining high-degree risk factors and a favorable treatment strategy if assessed with tumor markers (TM-LVI status) (20, 21). T stage and N stage are also considered risk factors with OR 2.27 (CI 95%; 1.14 - 4.51) and OR 2.56 (CI 95%; 1.41 - 4.62), respectively. Furthermore, we analyzed some other factors, including perineural invasion, harvested lymph node, and tumor primer site, in this study; however, the outcomes of the analyses were not included in this study as they failed to significantly affect early recurrence rates among post-treated CRC patients.

Some studies have demonstrated perineural invasion (PNI) as strong prognostic factor in patients with CRC (22-25). In their study, Knijn et al. also reported PNI as a strong prognostic factor in CRC (RR; 3.2 (CI 95%; 2.33 - 4.44)) since it can affect the incidence of local recurrence, five-years disease-free survival, five-years cancer-specific survival, and five-years overall survival rates (10). Different sites of primary CRC can be a recurrence risk factor (26, 27). According to Wang et al., the left colon has a relatively poor prognosis for the five-year disease survival, and it can be a risk factor for postoperative recurrence in CRC stage II (28). Meanwhile, the combination of the site and stages of the primary tumor in other studies can determine the recurrence pattern (29). Other factors such as > 12 harvested lymph nodes have also offered acceptable results regarding the five-year survival rates For example, the aforementioned parameter was better prognostic than < 12 harvested lymph nodes (27).

In conclusion, several risk factors, including vascular invasion, higher T stage, higher N stage, elevated pre- and post-operative CEA serum, and elevated pre-operative CA 19-9 serum, may affect earlier recurrence among patients with a history of surgically treated CRC. Among the aforementioned factors, elevated post-operative CEA serum was considered as the most prominent factor in this review study. Several other factors, including perineural invasion, lymph node harvest status, or primary site of the CRC, are recommended to be further analyzed in a cohort study to further support the present findings and determine the role of each parameter in the recurrence rate of CRC.

Copyright © 2022, Reports of Radiotherapy and Oncology. This is an open-access article distributed under the terms of the Creative Commons Attribution-NonCommercial 4.0 International License (http://creativecommons.org/licenses/by-nc/4.0/) which permits copy and redistribute the material just in noncommercial usages, provided the original work is properly cited.
download pdf 2.06 MB Get Permission (article level) Import into EndNote Import into BibTex
Number of Comments: 0