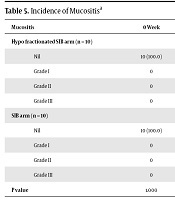 Reports of Radiotherapy and Oncology

Accelerated repopulation in HNSCC (head and neck squamous cell cancer) is responsible for poor outcomes; which can be tackled either by hyperfractionation or hypofractionation. Multiple daily fractionations in a setting with more patient load is cumbersome; hence we have tried to escalate the dose to the tumor with SIB by increasing the dose per fraction in the last two weeks of treatment to the tumor; thus, trying to achieve better locoregional control within a shorter period of treatment time.

A total of 20 histologically proven LAHNSCC patients, enrolled alternatively into the control arm (GTV 66Gy, CTVhigh risk 60Gy, and CTVlow risk 54Gy) and the study arm (32Gy to the GTV, CTVhigh risk, CTVlow risk in 16 fractions followed by 30Gy to the GTV, 25Gy to the CTVhigh risk and 20 Gy to CTVlow risk in 10 fractions,), in both arm patients received one fraction per day, five days per week. The radiological response assessment was done using a CT scan at the end of one month after treatment. Toxicity assessment was done weekly during treatment, at the end of treatment, in the first month, and at the end of two months.

IMRT with Hypofractionated concomitant simultaneous integrated boost (SIB) was better than standard IMRT with SIB in LAHNSCC, with respect to radiological response, however, at the cost of higher toxicity.

The global number of new cancers of the oral cavity, nasopharynx, and other pharyngeal sites have been estimated to be 455000. Annually, these tumors are responsible for over 300000 cancer deaths (2).

Overall 57.5% of global head and neck cancers occur in Asia, especially in India. In India 60% to 80% of patients are present with the advanced disease, in comparison with 40% in developed countries (3).

The treatment modalities used in the treatment of head and neck cancer are surgery, radiotherapy, and chemotherapy. Organ-preservation protocols using combined chemoradiation has become the standard of care for locally advanced oropharyngeal, hypopharyngeal, and laryngeal carcinomas. The very advanced hypopharyngeal and laryngeal carcinomas are treated by surgery, followed by postoperative chemoradiation (4).

Radiation therapy has been the standard of care for unresectable LAHNSCC patients, although the overall survival after radiation has, in general, been less than 25%. A number of efforts have been made to improve these disappointing results, including altered radiation therapy fractionation schedules and the use of systemic chemotherapy in conjunction with radiation (5). The survival rates for patients with advanced disease (stage III - IV) is in the 30% - 40% range, and the majority of these patients will eventually die of cancer (6). Due to locoregional recurrence of cancer, it is of utmost importance to develop treatment protocols that are able to produce maximal local control, which can be achieved with different fractionation schedules like hyperfractionated and accelerated radiotherapy (7).

More intense combination therapy leads to intensification of acute radiation- and chemotherapy related adverse events in normal tissues like acute radiation-related mucosal reactions, which make patients more vulnerable to infections, malnutrition, and disruptions in the course of radiotherapy, which can lead to inferior local control (8, 9). The delayed effects of radiotherapy, such as radiation induced xerostomia, can be distressing for patients. This can be reduced with current conformal radiotherapeutic techniques like intensity-modulated radiotherapy (IMRT), which enable escalating the radiotherapy doses given to advanced tumors and simultaneously reducing the doses to healthy normal tissues, thus, significantly improving the therapeutic ratio of radiotherapy (10). Currently the standard is IMRT with chemotherapy. SIB/SMART (simultaneous modulated accelerated radiation therapy) is an accepted mode of delivery of IMRT.

The issue of accelerated repopulation in squamous cell Head and neck carcinoma can be addressed by accelerating the RT, which can be done by hyperfractionation or hypofractionation. The former has been demonstrated by MD Anderson hyperfractionated RT with concomitant boost. The latter is being evaluated by us in a case control study by comparing SIB standard with hypofractionated accelerated radiotherapy with SIB, the BED being comparable in both the arms with GTV, CTVhigh risk, CTVlow risk having a BED of 74.5 Gy, 66 Gy, 57.7 Gy in the standard SIB arm, and 72.4 Gy, 64.7 Gy, 57.4 Gy in the study arm, respectively.

As multiple daily fractionations are not feasible for many institutions: hypofractionated accelerated RT is less labor intensive due to the fact that instead of accelerating by increasing fractionation we increase the dose per fraction. High toxicity of the surrounding normal tissue is counteracted by IMRT. Neck nodes can be targeted simultaneously and dose delivered to the nodes can be increased.

The study protocol and consent procedure were approved by the Institutional Ethical Committee situated at Kidwai Memorial Institute of Oncology, M. H. Marigowda Road, Bangalore, 560029 Karnataka, India. Patients aged between 18 - 75 years with KPS > 70, with a histological diagnosis of squamous cell carcinoma of head neck stage III - IV A, with no history of surgery of primary tumor, prior radiation therapy were eligible. Patient characteristics are depicted in Table 1.

Patients were treated with 6 MV X-rays on IMRT using SIB technique to give a total EQD2 of 70 Gy to GTV, 60 Gy to CTVhigh risk, 50 Gy to CTVlow risk in both arms.

Treatment was delivered once daily, five fractions per week, over 6 weeks.

All patients underwent a CT scan at the end of one month after treatment and response assessment was done as per the WHO Tumor Response Criteria and the results are depicted in Tables 2 - 4.

Our study is a comparative two groups parallel design:

Table 2. Response at the End of Treatmenta

Table 3. Response at the End of 1 Montha

The present study has been taken up to tackle the issue of accelerated repopulation in LAHNSCC, which can be done either by hyperfractionation as shown by the MD Anderson hyperfractionated RT with concomitant boost or with hypofractionation.

Gwozdz et al., in the MD Anderson concomitant boost radiotherapy for squamous cell carcinoma of the tonsillar fossa showed high rates of local and regional disease control with the concomitant boost fractionation schedule, with few cases of severe late morbidity. Of the 83 patients, about five patients had Gr 4 confluent mucositis. The acute mucositis was resolved in all cases. The five year actuarial local control rate of patients who received the boost during the final treatment phase was 87%. The five year actuarial loco regional control rate overall was 77%. The loco regional control rates for patients with AJCC stages II, III, and IV disease were 76, 65, and 85%, respectively (11).

Multiple daily fractionation in a setting with more patient load is cumbersome and not feasible. Thus, the present study was intended to escalate the dose to the tumor with SIB by increasing the dose per fraction in the last two weeks of treatment to the tumor; thus, trying to achieve better locoregional control within a shorter period of time and also to prevent treatment interruptions as the toxicity of normal tissues like mucositis is likely to peak toward the end or after the treatment, thereby ensuring better compliance.

In the present study, with respect to toxicity, there was grade 3 mucositis in 90% and grade 3 dysphagia in 40% of the patients in the study arm, which necessitated ryles tube feeding in 30% of the patients, but with complete resolution of the mucositis and to grade 1 dysphagia by the end of 3 months.

With the mean dose to the parotids being in the range of 28 to 31 Gy the xerostomia noted was also grade 1 in all the patients with gradual resolution of symptoms.

The present study showed that dose escalation in the last two weeks of treatment is tolerated by the patients with acute normal tissue complications peaking close to the end of treatment with resolution of the toxicities by the end of 3 months’ post treatment. In addition, with evolution of functional imaging, it will be possible to identify the areas of interest where dose escalation is needed. One of the short-comings of our study is small number of patients. Hence this needs to be confirmed in a study with a larger population.

IMRT with Hypofractionated concomitant simultaneous integrated boost (SIB) was better than Standard IMRT with SIB in LAHNSCC, with respect to radiological response, however, at the cost of higher toxicity.

Copyright © 2019, Reports of Radiotherapy and Oncology. This is an open-access article distributed under the terms of the Creative Commons Attribution-NonCommercial 4.0 International License (http://creativecommons.org/licenses/by-nc/4.0/) which permits copy and redistribute the material just in noncommercial usages, provided the original work is properly cited.
download pdf 99.23 KB Peer Review Comments ( 142.16 KB) Get Permission (article level) Import into EndNote Import into BibTex
Number of Comments: 0