Survey of Knowledge, Attitude, and Practice of Farmers About Crimean-Congo Hemorrhagic Fever 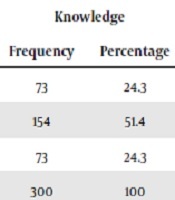 Crimean-Congo hemorrhagic fever is an acute febrile disease. It is one of the most common diseases among humans and animals.

Due to the presence of the disease in Iran, this study aimed to investigate the knowledge, attitude, and practice of farmers about Crimean-Congo Hemorrhagic Fever (CCHF).

A cross-sectional analytical study was conducted on 300 farmers in north and south villages of Khorramabad city selected using stratified sampling. The instrument used in the study was a valid and reliable questionnaire to measure the knowledge, attitude, and practice of people in contact with the livestock. After completing the questionnaire, the data were analyzed by SPSS using nonparametric tests (Mann-Whitney-U, Kruskal-Wallis, and Spearman correlation coefficient).

Due to the insufficient performance of farmers concerning disease prevention and health protection behaviors. implementation of an educational program to increase the level of knowledge could promote their prevention behavior Crimean-Congo Hemorrhagic Fever.

Today, zoonotic diseases are among the most serious, fatal, and widespread human diseases. The causative factors include viruses, bacteria, and fungi, among which viruses are considered as the most dangerous and severe agents (1). Crimean-Congo Hemorrhagic Fever (CCHF) is one of the most common and well-known zoonotic diseases caused by a viral agent (2). This disease was first reported in Crimea Island in Ukraine (3, 4). In 1956, the causative virus was isolated from a patient with a one-day fever in Stanley Ville, currently known as Kisangani, in the Democratic Republic of Congo. Since then, Crimean-Congo was combined to refer to this virus (5, 6).

According to studies, from 1999 onwards, various cases of CCHF have been reported as epidemics in many parts of Iran, confirmed with paraclinical examinations (7). According to the World Health Organization (WHO) in 2008 (8) and the disease geographical spread map in 2015 (9), Iran is located in the regional belt of the maximum incidence of CCHF. Most clinical cases have reported from eastern provinces, including Sistan and Baluchistan, Fars, and Khorasan (10, 11).

Since the villagers in Khoramabad city are mostly stockmen and farmers, and the cattle are present in rural areas, the transmission of CCHF is more likely to occur. This health problem can be controlled by promoting preventive behaviors, enhancing the knowledge of the routes of transmission, and making a proper attitude to the prevention of this disease. Thus, this study was performed to investigate the knowledge, attitude, and practice of farmers in Khorramabad city regarding CCHF in 2018.

In this cross-sectional analytical study, the population consisted of all farmers in Khoramabad city, the capital of Lorestan province, Iran. The sample size was calculated based on an alpha of 0.05 and beta of 0.2 using the formula N = (z2 × s2)/d2, where the z value is 1.96 at a confidence interval of 0.95%, s shows the standard deviation equal to 0.05, and d represents the extent of accuracy considered as 0.06. The obtained sample size was 267 cases. Given the probability of 10% attrition, overall, 300 individuals were considered. However, incomplete questionnaires were replaced; thus, there was no attrition.

A stratified sampling method was used. Briefly, six villages were considered as the strata (three from northern and three from southern villages) of Khoramabad city. Among the farmers in these villages, 50 farmers were chosen as the sample through random sampling.

The instrument utilized in this research was a questionnaire. The questionnaire consisted of four sections: (1) demographic questions about age, gender, marital status, level of education, type of animal husbandry, and type of livestock; (2) attitude questions with 10 items on a five-point Likert scale (absolutely disagree = 1, disagree = 2, no idea = 3, agree = 4, and absolutely agree = 5), with the scores ranging from 10 to 50; (3) knowledge questions with 10 items for measuring the knowledge of the target group, and whether they were familiar with the symptoms and ways of fighting the disease (each item had one correct option while the other options were wrong; two scores for the correct option, one score for “I don’t know”, and no score for the wrong answer; the range of scores 0 - 20); (4) practice questions with 10 yes/no questions measuring the necessary actions to be taken in the case of observation of the disease among the target group (Y = score 1, No = score 0; nevertheless, items 5, 2, 1, and 3 were scored inversely; score range 0 - 10). Our scoring system for attitude, knowledge, and practice-based of the original version. The mean score for each section was calculated and, based on the deviation from the mean, was classified into three categories: good, moderate, and weak (2). The reliability and validity of the instrument were evaluated in the study by Mokhtari et al. (2). They found it as a reliable instrument with a Cronbach alpha of 0.78.

Once the proposal of the research was approved at Payam Nour University, the Eastern Branch in Tehran, 50 farmers were randomly chosen from the farmers of the intended villages. Initially, the research objectives were clarified for the farmers. Then, after obtaining their informed consent, they were asked to complete the questionnaires. In this way, ethical considerations were followed, and the confidentiality and anonymity of the questionnaires were ensured. The participants were assured that their information would not be used for any purpose other than scientific research. After the completed questionnaires were collected, they were analyzed by SPSS 18.

The present study was performed on 300 farmers. The mean age was 38.94 ± 14.28 years ranging from 22 to 60 years. Besides, 57% of the participants were married, and 95% had traditional animal husbandry. Other information is provided in Table 1.

Table 1. The Frequency Distribution of Participants in Terms of Demographic Variables

Table 2. The Scores of Knowledge, Attitude, and Practice of Participants Regarding Crimean-Congo Hemorrhagic Fever

Table 3. Comparison of the Knowledge, Attitude, and Practice Scores of Participants for Demographic Variables

This study aimed to investigate the knowledge, attitude, and practice of farmers about Crimean-Congo hemorrhagic fever. Regarding knowledge, most farmers had a moderate level of knowledge about CCHF. In the study by Raab et al., a vast majority of respondents demonstrated excellent knowledge and favorable attitudes towards viral hemorrhagic fevers VHF (20). In the study by Abdollahi Shahvali et al., the knowledge of stockbreeders regarding CCHF was not adequate, and they needed the training to raise their knowledge in this regard (21).

The findings of the present study showed that most farmers had a moderate attitude toward CCHF. On the other hand, farmers showed poor attitudes toward controlling the disease by themselves. This suggests that poor attitude to an issue may cause it to become undervalued, and thus, individuals find an unfortunate practice in this regard. In the study by Abdollahi Shahvali et al., they also concluded that the attitude of stockbreeders regarding CCHF was not suitable and they required training to enhance their attitude in this regard to develop CCHF preventing behaviors (21).

Most of the participants had poor practice regarding protective measures for controlling CCHF. Based on the other findings of this study, poor attitude and knowledge about the disease among the participants can be a reason for their poor practice. The study by Ziapour et al. was also in line with our findings and showed that the frequency of practicing risky behaviors by those employed in the livestock and meat industry in Noor town was high regarding the disease. Further, practicing preventive behaviors against this fatal disease is deficient in occupations, such as animal husbandry and butchery (8).

In the present study, a significant relationship was found between knowledge, attitude, and practice regarding CCHF and marital status. Thus, by increasing their knowledge in different areas, one can alter their practice and improve their productivity. Also, the bolder presence of women in rural regions, as well as the cooperation that exists between men and women in agriculture and animal husbandry, can justify the relationship between marital status and knowledge, attitude, and practice regarding CCHF.

The results also revealed a significant relationship between the level of education and knowledge of individuals about CCHF. High levels of education can lead to studying more, thereby elevating the level of knowledge. Ziapour et al. also stated that more than half of the target group was poorly literate and thus had less knowledge about preventive solutions for the disease. As such, they did not use protective covers (8).

Based on the results of the present study, there was an inverse relationship between the age and level of knowledge. This suggests that older individuals in the study do not have adequate knowledge of CCHF. These results are congruent with the findings by Masoudy et al. regarding age and knowledge. They found that the old age of stockbreeders and low literacy caused them not to have adequate knowledge about the disease (24).

There was also a significant inverse relationship between the age and attitude levels of the participants. In this study, increasing age caused diminished attitude, suggesting that the studied elderly did not have an excellent attitude to CCHF. Little information about this issue and low literacy levels in the elderly lead to a low attitude of participants to the disease. In the study by Yilmaz et al. on the public knowledge of and attitude to CCHF in Turkey, 28% of the participants did not have adequate knowledge about this disease. They also found an inverse relationship between age and attitude due to poor literacy at advanced ages and the difficulty of attitude formation at old ages (25).

The findings revealed a significant inverse relationship between the age and level of practice of the participants. In this regard, with an increase in the age of participants, their level of practice diminished, confirming a lack of knowledge among the elderly and people with low levels of education and low attitude, and thus poor practice. Izadi et al., in a case study in Sistan and Baluchistan province, reported variables such as age above 40, history of slaughtering and high-risk jobs, and history of a tick bite as the risk factors for the disease (26).

One of the limitations of the present study was its cross-sectional design. Interventional and promotional studies should be conducted in this regard to improve the weak practice of farmers. Another limitation was the small sample size, which was limited to only one city in Lorestan province, which expectedly is going to address in further research. The present study was implemented through a questionnaire quantitatively. Thus, to better interpret the practice and its influential factors, qualitative studies are also required.

Based on the results of this study, the lack of knowledge and suitable attitude toward the disease may have resulted in poor practice in preventing and controlling CCHF. Thus, based on the findings of this study and the level of literacy of farmers in the studied region, it is suggested that suitable educational sessions be held in line with the literacy level of farmers to train them on how to prevent and control CCHF. It also proposed that regional veterinarians explain all signs of CCHF to farmers while examining the livestock.