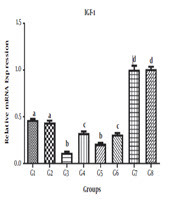 One of the most common agricultural pesticides is organophosphorus pesticides. Diazinon is one of the most widely used organophosphorus pesticides used in the fight against pesticides in the country. Much research has recently been done on the impact of exercise on brain function and several biological mechanisms have been proposed for the effects of exercise and physical activity on brain function. It is said that resistance training increases neuronal plasticity due to an increase in insulin-like growth factor-1 (IGF-1). Research has shown that IGF-1 can cross the blood-brain barrier and play an important role as a neurotrophic factor, especially in the hippocampus, and activate various important central mechanisms related to cognitive processes. Exercise also affects the expression of angiogenic genes such as PDGF and VEGF.

We randomly divided 40 male Wistar rats weighing 250 ± 50 g into eight groups of five and treated them with diazinon, berberine chloride, and resistance training. The groups were treated for five weeks. At the end of the fifth week, the levels of IGF-1, PDGF, and VEGF gene expression in hippocampal tissue homogenates were measured using Quantitative real-time PCR. Data were analyzed using ANOVA and Tukey’s post hoc test.

The results showed that resistance training and berberine chloride significantly increased the levels of IGF-1, PDGF, and VEGF gene expression in poisoned rats.

Based on the results of this study, resistance training and berberine supplementation have significant effects on reducing the harmful effects of diazinon toxin (P < 0.05) and increasing IGF-1, PDGF, and VEGF gene expression in poisoned rats.

Given the increasing number of populations and resource constraints in the agricultural sector and the urgent need to increase agricultural production, we feel the need for a rational and principled struggle against pests with an emphasis on compliance with the health of farmers and community members concerning environmental issues. A major part of these strategies includes different ways of combating harmful agents and pests, as well as identifying and applying chemical pesticides. The disadvantages of these pesticides are numerous because of their persistence in the environment and adverse effects on living organisms (1, 2).

One of the most common agricultural pesticides is organophosphorus pesticides. These toxins comprise a heterogeneous group of compounds that are all derived from phosphoric acid. They have two organic side chains and one additional side chain. This chain can contain groups such as cyanide, thiocyanate, halide, phosphate, phenoxy, thiophenoxy, or carboxylate. Most of these compounds are absorbed very rapidly through contact (3).

Diazinon is one of the most widely used organophosphorus toxins. The introduction of this contaminant into water resources, soil, and agricultural products can have devastating effects on human health and the environment. Diazinon with a lethal density of 50 - 100 (LD50 = 50 - 100 mg/kg) is a relatively volatile phosphorus pesticide. Diazinon in the body of animals can cause death by cholinesterase depletion and disruption of nerve cells (3).

Berberine is an organic yellow alkaloid with a bitter taste that has been used in traditional Chinese medicine for nearly 3,000 years. Some of the multiple effects of berberine include the promotion of nerve protection factors/pathways and some others include the neutralization of those that increase nerve damage (5). Research has shown that berberine can increase behavioral dysfunction through cortex neurogenesis. The neuroprotective effects of berberine are said to be associated with the survival/apoptotic/GSK3β/Akt/ERK1/2 signaling pathway, as well as the inhibition of caspase 3 and JNK activity. In addition to using such substances to counter the destructive effects of diazinon toxin, it will be useful to utilize other effective methods that can increase the ability to cope with such poisons (6).

Insulin-like growth factor-1 (IGF-1) is a trophic mediator that acts through growth hormones and regulates cell growth and peripheral metabolism (8). This growth factor is expressed in many tissues including the brain and is important due to nerve cell growth, differentiation and synthesis, and the release of neurotransmitters (9). Acute exercise stimulates the expression and release of IGF-1 from the liver. Thus, it seems that the expression and secretion of IGF-1 are essential for hippocampal neurogenesis induced by acute activity, as well as recovery of function after brain damage (8, 10). It is said that resistance training increases neuronal plasticity due to an increase in IGF-1. Research has shown that IGF-1 can cross the blood-brain barrier and play an important role as a neurotrophic factor, especially in the hippocampus and in the activation of various important central mechanisms related to cognitive processes (11).

Angiogenesis is a process that drives endothelium function to produce new blood vessels by branching to the previous blood vessels (12). Angiogenic growth factors and proteases play a key role in the process of angiogenesis. Among angiogenic factors, the vascular endothelial factor has been identified as the most potent endothelial cell mitogen. Vascular endothelial growth factor (VEGF) stimulates endothelial cell proliferation and differentiation and enhances vascular permeability. Angiogenesis is a form of adaptation to physiological stimuli such as exercise that compensates for increased metabolic needs of tissue (13, 14).

We selected 40 male Wistar rats, 40-50-weeks-old, weighing 250 ± 50 g, at the Animal Laboratory Research Center of Islamic Azad University, Central Tehran Branch. All animals were kept under standard laboratory conditions in cages sized 15 × 15 × 30 cm made of transparent polycarbonate (four rats per cage) in controlled conditions (ambient temperature 22 ± 2°C, humidity 50 ± 5, light/dark cycle 12:12, and free access to adequate food and water). All experiments were performed following the laboratory guidelines for the care and use of animals in Iran, as well as the guidelines of the Animal Care Ethics Committee of the Research Institute of Sport Sciences (code of ethics: IR.SSRI.REC.1396.159).

Berberine chloride was purchased from Sigma, USA, in the powder form. The doses of berberine were 2 and 15 mg/kg of body weight for five weeks (five days per week) to be administered intraperitoneally. Berberine was diluted in normal saline 0.09%. Berberine chloride solution was prepared using a magnet on a stirrer machine without heat. Insulin syringes were used to inject berberine. Diazinon was purchased from Sigma, USA. Diazinon was administered intraperitoneally to rats at a dose of 1.5 mg/kg of body weight. Dilution was performed with normal saline 0.09%.

Resistance training was performed in one session per day, three days a week, for five weeks, consisting of climbing a wooden vertical ladder with 26 steps (100 cm height with 2 cm inter-step distance and 80 degrees slope) while carrying weights attached to their tail. Each training session consisted of two sets and six repetitions that required 8 to 12 active movements per climb. The rest lasted 60 s between each repetition and 2 - 3 min between each turn. Weights started at 10% of the total body weight, which increased to 20% in the second week, 30% in the third week, 40% in the fourth week, and 50% in the fifth week. The rats were weighed at the beginning of each exercise week and the new weights the rats were supposed to carry were adjusted to their weight of that week. The training protocol is presented in detail in Table 1.

For tissue extraction, at the end of the fifth week of training and 48 hours after the last training session, rats were injected intraperitoneally with a combination of ketamine (75 mg/kg; Sigma, USA) and xylazine (10 mg/kg; Sigma, USA). To collect hippocampal specimens, rats’ heads were separated from the neck by special scissors. The skull was first surgically cleaved and the brain was removed with caution. After being placed in cold saline solution, cooling, and tissue consistency, the brain was split right into the middle by a surgical razor blade and considering the coordinates of the hippocampus. Finally, the hippocampus was separated from the limbic system with the help of a clean atlas of the sinus.

To investigate the expression of the given genes, total RNA was extracted from hippocampal tissue by a Trizol solution (Kiazol, USA). A nanodrop machine was used to accurately measure the RNA concentration.

The given mixture was kept at 42°C for 40 min and at 85°C for 5 min. The primers used in this study are shown in Table 2. We used GAPDH as the reference gene in each sample.

A kit (BioFact) was used to measure gene expression. The temperature program to perform the reaction included 15 min at 95°C, 20 s at 95°C, and one minute at 60°C for 40 cycles. The 2-ΔΔCT (fold change) method was used to determine the relative expression of the given genes. Cycle Threshold (CT) of samples was compared with internal control CT (GAPDH).

Descriptive statistics were used to classify and determine the measures of dispersion. The Kolmogorov-Smirnov test was used to detect the normal distribution of data. One-way and two-way analysis of variance (ANOVA) and Tukey’s post hoc tests were used to determine the significance of differences between groups. Data were analyzed using GraphPad Prism software (version 8). P values of less than 0.05 were considered statistically significant. All data were expressed as mean ± SD.

The levels of VEGF, IGF-1, and PDFG gene expression in different treatments are shown in Tables 3-5, respectively. The results of comparison of different treatment and control groups for mean VEGF gene expression showed that there were significant differences between G1, G2, G3, G7, and G8 groups at the level of 0.05 (P < 0.05) while no significant differences were observed between groups G2, G4, and G5 at the 0.05 level (P > 0.05) (Figure 2). The therapeutic effects of resistance and physical exercise are well recognized on the heart and metabolic diseases (16, 17). Physical activity and exercises can affect the immune and inflammatory responses by altering the serum levels of growth factors and intermediates (18, 19). One of these factors is IGF-1.

The effect of exercise on IGF-1 has been investigated in several studies. In a study by Hagberg et al. (20), following 60 min of training on a treadmill at 70% of the subjects’ maximal oxygen consumption, a significant increase was observed in IGF-1 levels. However, in the present study, due to the effect of organophosphorus pesticides on living organisms, a significant decrease was observed in the expression of this gene compared to the control and treatment groups with different concentrations of diazinon and berberine chloride (P < 0.05).

Based on studies by other researchers, organophosphorus toxicity is induced by cellular mechanisms. Among their effects is the production of free radicals by these compounds, followed by changes in the cell's antioxidant system and membrane lipid peroxidation.

In fact, organophosphorus toxins can disrupt the antioxidant system (21, 22). As the rate of production of oxidative compounds increases, it can have devastating effects, including inflammation, damage to the DNA and cell membrane, as well as reduced ability to store glycogen (23). These consequently result in reduced gene expression.

Most researchers still believe that long-term, endurance aerobic exercise can increase angiogenesis, which is caused by increased expression of the relevant genes. But in the present study, the levels of VEGF and PDGF gene expression in diazinon-treated rats decreased despite exercise training compared to the sham and control groups, which could be due to the deleterious inflammatory effects and oxidative stress of organophosphorus toxins such as diazinon that significantly decreased the expression of this gene in the treatment group compared to the control group. On the other hand, Sihvo et al. (26) showed that increased oxidative stress decreased antioxidant capacity and caused a negative correlation between glutathione content and DNA adduct and gene expression, indicating a relationship between oxidative stress and genetic conditions in the body. It also induces changes in cellular redox conditions and the activity of trans-activating factors in many transcription factors, thereby causing alterations in the target gene expression and cell function (26).

Based on the results of this study, resistance training and berberine supplementation have significant effects on reducing the deleterious effects of diazinon toxin and increasing the levels of IGF-1, PDGF, and VEGF gene expression in poisoned rats.

Copyright © 2019, Author(s). This is an open-access article distributed under the terms of the Creative Commons Attribution-NonCommercial 4.0 International License (http://creativecommons.org/licenses/by-nc/4.0/) which permits copy and redistribute the material just in noncommercial usages, provided the original work is properly cited.
download pdf 317.26 KB Get Permission (article level) Import into EndNote Import into BibTex
Number of Comments: 0