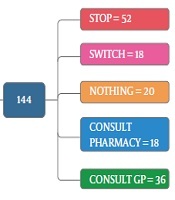 A Cross-Sectional Study of Antibiotic Self-Medication

This research has been conducted to study antibiotic self-medication, prevalence, and reasons.

A questionnaire containing 30 comprehensive questions in terms of the experience of antibiotic self-medication was prepared. In this cross-sectional study, data were analyzed using analytical statistics bases on chi-square and logistic regression.

The results showed that 61.3% of the participants were self-antibiotic users. There was a significant difference only between gender and self-medication such that self-medication in males was more than females (P value = 0.027).

Self-medication of antibiotics is almost high and requires more information about the side effects of these drugs in order to promote rational and physically prescribed use.

Globally, antibiotics are one of the most commonly used medicines, specifically in developing countries where infectious diseases are still the most common cause of death (1). Self-medication refers to any attempt for self-treatment after self-diagnosis of the health issue or medical problem by taking medicines without any professional advice or authorized prescriptions (2). This type of medical solution is pervasive in most parts of the world, and 50% of all used antibiotics are purchased without any prescription (3). Antibiotic self-medication may lead to health hazards in developing countries that face poverty, inaccessibility, lack of medical professionals, poor quality of health equipment, irregular distribution of medicines, and decreasing patients’ trust in physicians (4). Considering the rapid growth of microbial resistance to antibiotics (5-7), the World Health Organization (WHO) has begun implementing a global program entitled Microbial Resistance to Microorganisms in 2001 (8). Despite these WHO activities, the use of antibiotics without prescriptions is increasing in developing countries (9).

considering the current situation of antibiotic resistance and demographic characteristics of visitors of a medical center located in the Northwest of Tehran, this research was conducted to investigate antibiotic self-treatment in the community.

Categorical variables were expressed as frequencies, whereas numerical variables (age) were presented as means and standard deviation (SD) as data were normally distributed. We used the chi-square test (Fisher’s exact) for comparing the study variables such as gender, education level, marital status, insurance status, and occupation. Based on collected data, at least 1,024 records were required to make a predictable model, and 434 records were not sufficient for this purpose. All statistical analyses were performed using STATA software (version 22), and only p-values less than 0.05 were considered significant. 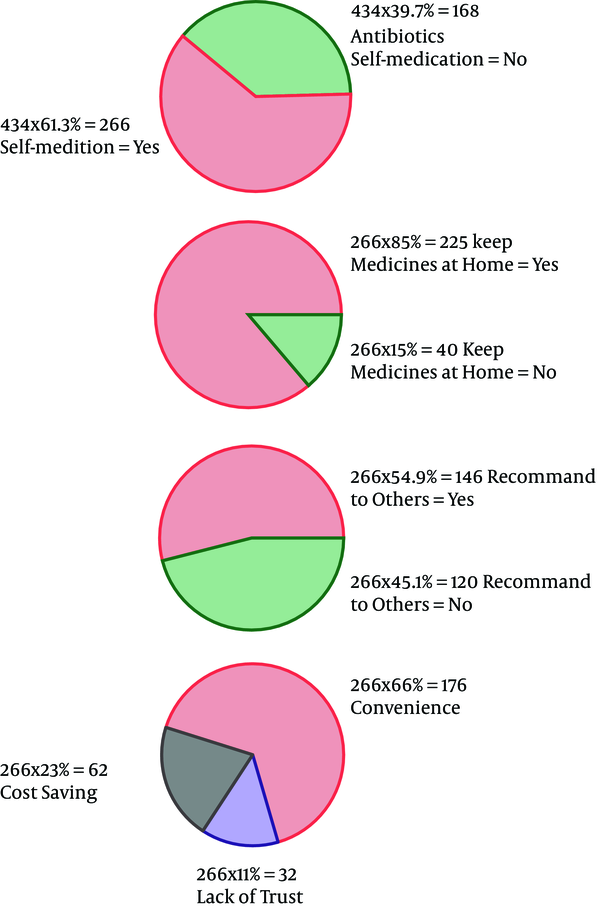 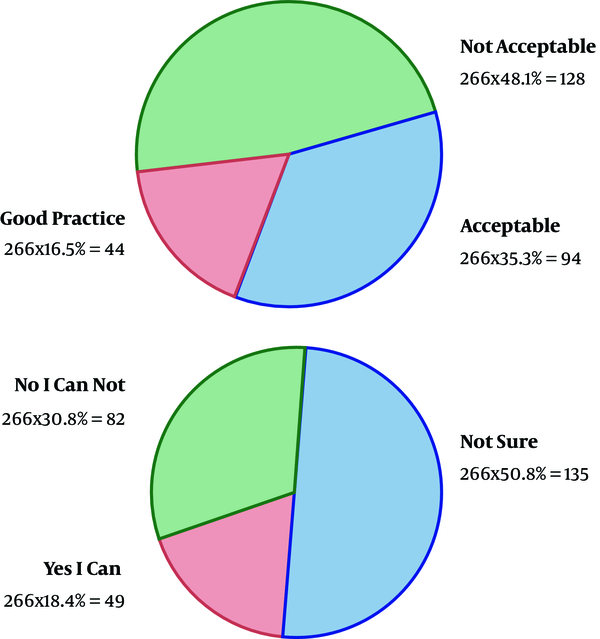 Here, 144 participants switched to another antibiotic.

Figure 8 illustrates 144 out of 266 participants of the group two had adverse reaction experiences and what they did after these experiences. Most participants stopped taking medicines after an adverse reaction. In this study, 71.4% of self-medicated participants (group 2) used antibiotics to treat sore throat, 51.2% of them in the self-medication group chose the medicines for treatment based on the last prescribed medicine, and 45.6% relied on their own former experience. In selecting antibiotics, 53.4% considered the type of medicines, 56.6 % occasionally checked the instructions on the medicine package, 30.3% always checked this instruction, 53% of the group two participants fully understood the instructions, 35.9% partially understood, and 11.1% did not understand at all. Also, 46.6% stopped taking antibiotics when their illness symptoms disappeared (19.5%). Amoxicillin, Co-amoxiclav, and Cefixime were the most common antibiotics used, respectively. Table 1 summarizes the comparison of different five factors, including gender, occupation, education, marital status, and health insurance cover in the self-medication and non-self-medication groups. These results were not significant at P < 0.05.

Most researchers focused on patients’ views and their opinions regarding antibiotic self-medication (14-17). Healthcare professionals and medical advisers, particularly pharmacists, play a significant role in modifying these beliefs and habits (18). The frequency of self-medication in this survey (61.3%) was more than the mean estimation of antimicrobial self-medication in the countries with low and middle-range income (38.8%) (15).

The results of recent research indicate that the prevalence of self-medication varies between 7.3% to 85.59%, with an overall prevalence of 42.64% (19).

The reasons for this prevalence variation are differences in social determinants of health, tradition, culture, economic, developmental status, socioeconomic culture, personal traits, and the healthcare system (20, 21). On the other hand, methodology, study prevalence variation, sample population, and recall time may cause this variation. The other series of parameters for the prevalence of self-medication include the short distance between pharmacies and residential area or long distance to the healthcare facility, negligence, minor illness, inappropriate attitude of health workers (impolite, corrupt, unclean), re-treatment of similar disease, and lack of health personnel (19).

According to reports of studies, mothers without jobs and mothers with higher education without any health insurance cover more than mothers who employed attempt to treat their children by antibiotic self-medication. Based on Lithuania’s research, there is no relation between knowledge about antibiotics and self-medication (16). On the other hand, free study results in the USA indicate that the lack of sufficient knowledge is one of the reasons behind antibiotics self-medication (26).

The most common cause of self-medication in our study is the ease of access to these medicines. Whereas, Horumpende et al. confirmed that the lack of knowledge, the urgent need to treat illness, and the expense of access to health requirements lead to self-using of antibiotics (29). In the Ershadpour survey, most people believe that there is no risk for antibiotic self-medication (30). Some of the other reasons for antibiotic self-medication in Iran are patients’ lack of trust in the quality of medicine, preferring the imported brand and the availability of over the counterantibiotics (29). The result of our study showed that 46.6% of the participants stopped taking antibiotics when their symptoms had disappeared. Many researchers studied to find out why people stop taking medicines after their symptoms disappeared. Their results indicate that people have not sufficient knowledge about improper treatment taking antibiotics and adverse reactions caused by it (31).

In the current study, 73% of participants in the group two believe that antibiotics can affect bacterial infections. Ekambi et al. and Bulario et al. (2018) have reported that in the opinion of 74.7 % of their survey participants, antibiotics have affected bacterial infection (20, 23). Generally, most people do not have accurate and comprehensive information regarding antibiotics, their properties, side effect, and fighting against microbes and infections (20). A community-based study in developing countries has reported that most adult people believe that bacteria and viruses are the same, and antibiotics can kill both of them (32).

The most commonly used antibiotic in our study was amoxicillin, which is consistent with the results of the Nepal (1), whereas, in the study of Ajibola et al., the most common antibiotic was ampicillin (33).

In our study, most people took antibiotics to treat sore throat, and the most common side effect was nausea. According to the study by Bulario et al., most participants took antibiotics for fever, cough, and cold (23). According to Horumpende et al. research, in Barangay Tandang Sora, Quezon City cough, throat irritation, fever, and gastrointestinal tract diseases such as diarrhea and vomiting mostly make people take antibiotics without physician advice (29). Based on Gebeyehu study, health issues, which lead people to take antibiotics without prescription are tract symptoms (74.6%), diarrhea (74.4%), and physical injury/wound (64.3%), respectively (31).

Antibiotic self-medication can cause some severe adverse reactions. Obtained results from participants’ responses highlighted the role of local community pharmacy as an available and reliable health advisor and medicine supplier. In conclusion, pharmacies can support community health by providing medicine leaflets. These leaflets include information about the proper dosage of medicine, instruction, the treatment period, side effects, and adverse reactions.

The authors would like to thank medical students for contributing to this study.

Copyright © 2020, Author(s). This is an open-access article distributed under the terms of the Creative Commons Attribution-NonCommercial 4.0 International License (http://creativecommons.org/licenses/by-nc/4.0/) which permits copy and redistribute the material just in noncommercial usages, provided the original work is properly cited.
download pdf 124.78 KB Get Permission (article level) Import into EndNote Import into BibTex
Number of Comments: 0