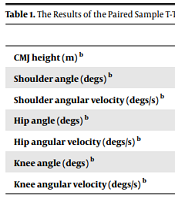 Countermovement vertical jump is a crucial skill in many sports. Plyometric training is a prevalent method to improve athletes' jumping ability.

The present study aimed to investigate the effect of a 6-week plyometric training on the kinematics of take-off and countermovement vertical jump height.

Fifteen young, healthy male subjects performed plyometric exercises in three sessions per week for six weeks. Digital videos of pre-training and post-training jumps were captured. The Kinovea software was used to measure the kinematic parameters of take-off in the sagittal plane. Pre and post-training values were compared by paired sample t-test with the statistical significance level of P < 0.05.

Countermovement vertical jump (CMJ) is a fundamental technique in some sports, such as volleyball, basketball, and gymnastics. Therefore, researchers and coaches need to improve their skills (1, 2). A good CMJ is the result of coordinated interactions between the neuromuscular process, muscle physiology, and skeletal system (3-5). Quantifying these interactions and evaluating their relations with the performance of CMJ can have many difficulties. Thus, the CMJ performance is indirectly evaluated by measuring the jump height and investigating the kinematic of the movement (2, 6-9). In this way, researchers tend to alter the kinematic parameters of the CMJ to improve the performance and also increase the vertical jump height (10-14).

For optimum CMJ performance and maximum jump height, the kinematics of upper and lower extremity joints during the movement has to follow the pattern extracted from biomechanical fundamentals. The hierarchical model of vertical jump helps coaches and researchers design specific training and identify key events and parameters for movement analysis (24-26). Based on the biomechanical fundamentals of CMJ, ankle joints affect the jump height at take-off kinematics of the shoulder, hip, and knee. These parameters are studied in key events of CMJ, such as eccentric phase, concentric phase, and take-off but not related to a PT program (2, 8, 11, 14, 27). Flexion angle of the knee at the beginning of the concentric phase (7, 11, 27) and arm swing in the concentric phase (6, 28) affect CMJ performance. Also, shoulder flexion angle (2, 28) and hip and knee angular velocities (29) are important parameters of CMJ take-off. These parameters have a direct effect on the jump height, which means shoulder flexion angle, hip angular velocity, or knee angular velocity increase at take-off.

We randomly selected fifteen young and healthy male participants (age = 27.6 ± 3.7 years, height = 178.9 ± 6.8 cm, weight = 74.4 ± 10.2 kg) with no history of musculoskeletal pathology or injury. That the participants have no backgrounds in volleyball, basketball, and gymnastics was a condition for entering the research. The eligible volunteers were invited for data collection. Having explained the aims and procedures of the study to the subjects, we obtained their written consents.

After getting written consent from participants, A set of spherical reflective markers with two cm diameter were attached to their joint center in the lateral part of the right lower and upper limbs. The Markers were attached on the second metatarsal of the right foot, right lateral calcaneus (ankle), right lateral condyle of the femur (knee), right great trochanter (hip), styloid process of the radius (wrist), lateral epicondyle of the humerus (elbow), and greater tubercle (shoulder) according to the protocol used in the study by Leporace et al. (30). The movements of markers were recorded with a high-speed (240 f/s) video camera. The data were collected in two pre-training and post-training sessions. In each session, after ten minutes warm-up, the videos were captured for six countermovement jumps with a one-minute interval in between. The post-training session was recorded after three days of the final training session.

Over the course of six weeks, this included three training sessions per week, each of which began with 10 minutes warm-up, including jogging and dynamic stretching exercises, and finished with 20 maximum efforts CMJ and 20 box jumps of 60 cm height. The order of the jumps was selected randomly.

The videos were imported in Kinovea software (V 0.8.24). The markers were manually tracked into the Kinovea software for the whole period of each jump. Joint angles were measured in a local reference system which full extension is considered as 180 degrees (degs). The position of each marker relative to the reference system was also determined. Jump height was defined as the difference of hip marker vertical position between standing and its highest value. The three highest jumps were selected for kinematic analyses to calculate the average of joint angles and angular velocities at take-off in the sagittal plane (31, 32).

We employed the paired-sample t-test to compare the jump height and the kinematic parameters between pre and post-training sessions using SPSS software.

Table 1. The Results of the Paired Sample T-Test Before and After Training for Jump Height and Kinematic Parameters at CMJ Take-Off a

bSignificant difference between pre and post-training.

The purpose of this study was to investigate the effect of six weeks of plyometric training on the CMJ height and kinematic of lower limb and shoulder at take-off in male athletes. The results showed a significant increase in the jump height due to the training program. Despite critical changes in other studied kinematic parameters via the training method, the hip angular velocity did not show any improvement after training.

The significantly increased CMJ height due to the plyometric training in this study is in agreement with studies about the effect of short-term plyometric training (1, 15-19). In the current study, the CMJ height was increased from 43.80 cm to 53.13 cm (21.3%) after 6-week plyometric training. Zubac et al., Hammami et al., Arabtazi et al., and Adibpour et al. also showed an increased jump height of 11.4%, 14.0 %, 14.6%, and 18.8%, respectively after 8-week training. Therefore, the training program used in this study showed a better effect on the CMJ height in a shorter training period, which could be due to designed plyometric exercises, training intensity, demographics of participants, and sports background of the subjects. However, the increased jump height in this study was in contrast with the outcome of the review conducted by Oxfeldt et al., who showed improvement in the CMJ height after increasing the training sessions (19). Rubley et al. showed an increase of the CMJ height of about 13% after seven weeks of low-impact plyometric training, but their results were not significantly different from pre-training (22). Comparing all the results, we could conclude that the high-intensity short-term PT might be the most efficient, but this needs to be investigated further in future studies with consideration of other conditions, including the type of exercise used in the training method.

In this study, the training program improved the knee extension, which, according to the hierarchical model, is effective on jump height (26). Similar results are noted by Moreau, who studied the kinematics of take-off of loaded CMJ (14). They showed more extent knee at take-off increases jump height in female gymnasts and soccer athletes (14). They also demonstrated that the increase of shoulder flexion velocity after training, which can be one of the effective parameters on CMJ height, improved by PT. Lees et al. indicated the effects of arm swing on CMJ height because the increased shoulder ROM and flexion velocity might improve the work and power generated by the shoulder to increase jump height (28). Hip and knee extension velocities at take-off are also crucial parameters of CMJ that are significantly increased after PT. Balster et al. indicated that an increase in hip and knee angular velocities at take-off would improve the jump height (29).

The main limitation of this study was that only the biomechanical parameters were measured in the sagittal plane, although, based on the literature, the 2D analysis of CMJ is reliable.

The 6-week plyometric training improved CMJ performance, resulting in a significant increase in jump height. The PT significantly improved not only the shoulder flexion and hip and knee extensions at take-off but also the angular velocities of the shoulder, hip, and knee.

Countermovement vertical jump is an important factor in volleyball, basketball, and gymnastics. Thus, improving CMJ improvement via training methods such as plyometric training is of great importance for coaches. A deep understanding of kinematic parameters of CMJ at take-off can help coaches design individualized training programs. The present study examined the effect of 6-week PT on CMJ height, angle of the shoulder, hip, and knee, and angular velocities of mentioned joints in males. The angle of the shoulder, hip, and knee at take-off and also angular velocities of these joints seem to be effective on CMJ height. Thus, coaches might use PT to improve these kinematic parameters and improve CMJ. Coaches should consider different strategies such as PT to improve shoulder flexion and increase hip and knee extension velocities at take-off. Improvement of kinematic parameters of movement can improve athletic performance. Therefore, for an optimal training design, it is necessary to consider kinematic parameters in addition to the ultimate goal of motor skill.

Copyright © 2020, Author(s). This is an open-access article distributed under the terms of the Creative Commons Attribution-NonCommercial 4.0 International License (http://creativecommons.org/licenses/by-nc/4.0/) which permits copy and redistribute the material just in noncommercial usages, provided the original work is properly cited.
download pdf 113.70 KB Get Permission (article level) Import into EndNote Import into BibTex
Number of Comments: 0