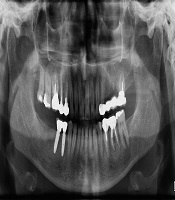 Diagnosis and Treatment of an Odontogenic Maxillary Sinusitis: A Case Report Study

Given the improvements of diagnostic equipment, including new imaging modalities, the diagnosis of odontogenic sinusitis cases has been growing rapidly in recent years. The disorder is mainly caused by Aspergillus species since this species, as the most common pathogen, usually appears asymptomatic, leading to a delay in diagnosis. In this regard, the common manifestations involve headache, cough, nasal discharge, and facial pain. Clinicians usually disregard the odontogenic origin while seeking the etiology of symptomatic rhinosinusitis.

In this paper, we report a case of odontogenic maxillary sinusitis in the left maxillary sinus of a patient complaining about intermittent pain, post-nasal discharge, anosmia, and oral malodor. According to the clinical examinations and radiographs, maxillary sinusitis was diagnosed, and the patient was treated with the surgical debridement of the affected tissue.

Odontogenic sinusitis is most commonly the result of periodontitis or iatrogenesis. Although no antifungal treatment is necessary for fungal sinusitis, a variety of surgical approaches are adopted. The accurate diagnosis of odontogenic sources improves both treatment strategies and postoperative outcomes.

Non-invasive rhinosinusitis is initiated by the exposure of sinonasal mucosa to non-invasive fungal dense concretions (6). It generally occurs in adult patients with a mean age of 64 years; however, it is mainly observed among females (7). This disease is associated with protracted nasal congestion, thick and discolored nasal discharge, facial algia, or chronic cough in some cases (8). The treatment consists of a surgical approach to the debridement of the affected sinus in the absence of antifungal agents. Favorable results are achieved when the intervention is promptly conducted (8, 9).

Invasive rhinosinusitis, such as chronic rhinosinusitis, penetrates the paranasal sinus mucosa, bone, and dura to find its way to the blood vessels (10, 11). This disorder is common among immunocompetent individuals; however, it is more frequently observed in immunocompromised patients. Accordingly, the disorder needs to be treated more aggressively. To this end, removing infected tissues and antifungal drugs is necessary. Despite this aggressive approach, blindness, stroke, and death may occur in some cases (12).

Any violation of the Schneiderian membrane may result in the onset of odontogenic sinusitis (13) because of many factors, including iatrogenic, infectious, implantologic, and traumatic causes (14). The infection of the maxillary sinus by the infectious maxillary posterior teeth leads to odontogenic sinusitis. Dental measures such as tooth extraction, placement of dental implants, endodontic treatments, maxillary sinus elevation, and Le Fort osteotomies may arouse this type of sinusitis (15-17). Odontogenic sinusitis has a lot in common with other chronic inflammations of the sinuses. For example, patients usually complain about the periodic discharge from the nose and oral halitosis. They may respond well to antibiotic treatments, with the resolution in symptoms, which may recur sometime in the future. The patients may also complain about non-typical facial pain and tooth pain during their routine dental visits (18). In this paper, we described the diagnosis and treatment of a fungal rhinosinusitis case with odontogenic origin in a patient with no history of medical illness.

A 45-year-old woman was referred to a private dental clinic with a tooth sensitivity complaint and food stuck in the left maxillary posterior region. The patient had no significant medical history (no immune-compromising condition), and all laboratory values were typical. She mentioned that she had had her left maxillary’s first molar extracted about two years ago. Two months after the tooth extraction, she sometimes experienced intermittent pain in her left zygomatic region. She also mentioned that she was experiencing post-nasal discharge (PND), anosmia, and oral malodor during the same period. The physical examination of the oral cavity showed no pathological change.

The examinations revealed that her bridge was not well-fitted; hence, she wanted to have it replaced by dental implants. The obtained panoramic radiograph (Planmeca ProMax 2DS2, Finland) indicated that the left maxillary sinus was completely opaque, and the discontinuity of the maxillary sinus floor was detected near the teeth in the 14th region (according to the FDI tooth numbering system) (Figure 1). Cone beam computed tomography (CBCT) imaging was used (Planmeca ProMax 3D Max, Finland) for the further investigations and evaluation of the bone quantity and density in the implant region. The 3D images were provided with 2-mm intervals and the slice thickness of 1 mm, which indicated that the left maxillary sinus was entirely inflamed, and that there was an oro-antral fistula (OAF) with a 4-mm diameter in the 14th region. On top of the OAF, a remained root fragment was observed, and a metal density foreign body was also noticed in the left maxillary sinus near the ostium (Figures 2 and 3). 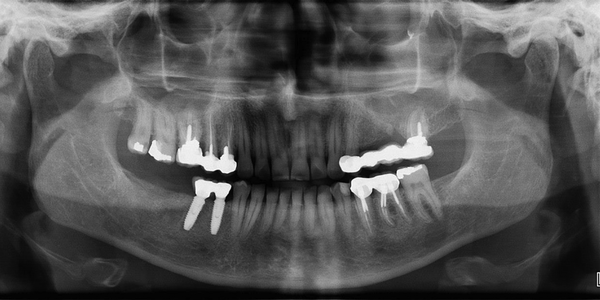 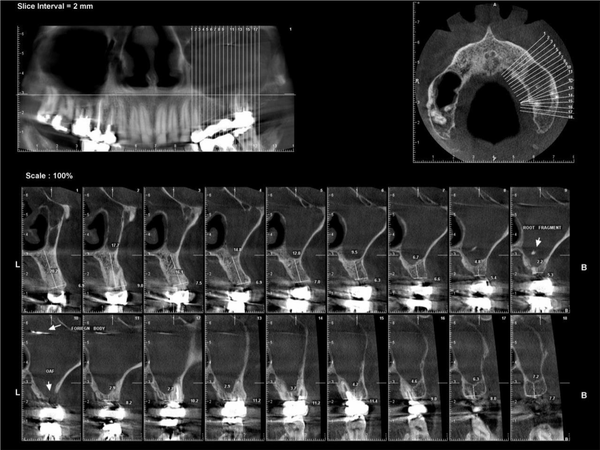 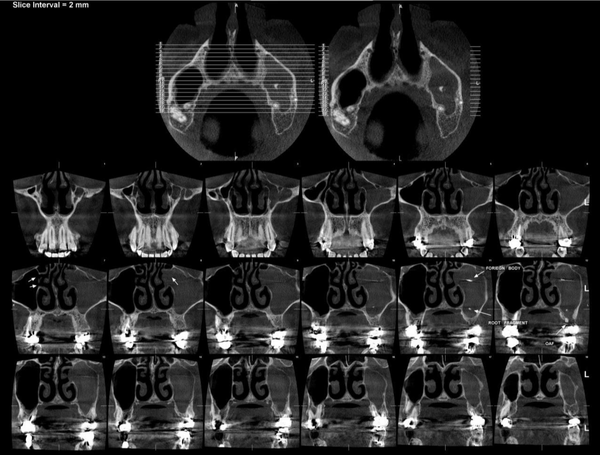 Coronal view with 2-mm slice intervals representing the complete opacification of the left maxillary sinus, the obstruction of the left ostium, root-fragment, and foreign body in the 11th section, and OAF in the 12th section

Following the diagnosis of the maxillary sinusitis, the patient agreed to undergo functional endoscopic surgery after consulting the clinician. In this case, all the involved tissues and the foreign body were removed. The histological examination revealed fungal mycelium and Aspergillus fumigatus were in mycologic analysis. Amoxicillin and clavulanic acid were prescribed as a prophylactic treatment for seven days to reduce postoperative infection risk; however, no antifungal treatment was administered. During the six-month follow-up period, the patient revealed no evidence of recurrence, and all the symptoms were resolved.

In recent years, the prevalence of fungus ball has been on the rise. Loidolt’s et al. study indicated that about 10% of all patients undergoing surgical treatment for chronic sinusitis suffered from fungal rhinosinusitis. This disorder is primarily observed in the maxillary sinus and can be diagnosed in sphenoid, frontal, or rarely in ethmoid sinuses (19). Fungal rhinosinusitis may have an odontogenic origin. Fungal growth, particularly the growth of Aspergillus species, is stimulated by some dental materials used for pulpal treatment to enable mycetoma formation. The materials include pastes for root filling, such as zinc oxides, or some metals in endodontic materials (18). These materials can be inserted into the maxillary sinus through the apex during root canal therapies or as a result of traumatic dental procedures, such as extraction or dental implantation (20), which was in accordance with our case of odontogenic sinusitis.

Mackenzie first represented a fungal rhinosinusitis case (21). Odontogenic sinusitis commonly appears in females and patients passing the fourth to the sixth decade of their life (18). These patients are usually immunocompetent with no significant changes in their immunoglobulin level. Patients suffering from mycetoma commonly present few symptoms, leading to a delay in the diagnosis. Only 29% of these patients are diagnosed before one year from when the first symptoms arose (22).

Aspergillus is a fungus belonging to the Ascomycetes class. Aspergillus fumigatus is the most common subtype of fungi pathogenic in humans, followed by Aspergillus niger and Aspergillus flavus (23). The growth of Aspergillus species is reported in both rhinology and odontogenic sinusitis cultures. Zirk et al. (13) indicated that dislocated foreign bodies in the maxillary sinus contain Aspergillosis. Fungal growth in the maxillary sinus is increased by using dental filling materials during the endodontic procedure, which appears to be the main effective factor in this regard. Microorganisms can also penetrate the sinus because of apical periodontitis (24). Such alterations can often be diagnosed by computed tomographies (CTs).

Plain panoramic images can visualize maxillary dentition pneumatization, pseudocysts, displaced roots, or foreign bodies in the maxillary sinus. However, such radiographs ignore 55% - 86% of the disease and thus are poorly suitable for diagnosing odontogenic sinusitis (25). CT is the gold standard imaging modality used for maxillary sinus evaluation and relevant odontogenic diseases. These images can display both bone and soft tissue features. Despite the failure of CT images in the diagnosis of dental diseases, they are frequently used to diagnose odontogenic sinusitis (1). Cone-beam CT (CBCT), a low-radiation alternative to conventional CT, is a better option than plain radiographs in the diagnosis of odontogenic sinusitis.

Recent investigations on the radiographic features of odontogenic sinusitis have revealed that unilateral maxillary sinus opacification is the most common finding in patients suffering from this disorder, even in those with no associated sinonasal symptoms. The coexistence of rhinologic chronic rhinosinusitis and odontogenic sinusitis leads to a prevalent disease (26). According to Bomeli et al. (27), the opacification range represents the origin of the disease, and more severe sinus diseases are likely to originate from an odontogenic origin. On the CT images, the maxillary sinus floor should be thoroughly examined for bone loss, dehiscence, foreign bodies, or mucoperiosteal thickening. The direct communication between the oral cavity and the maxillary sinus allows the pathogen's direct penetration with no radiographic evidence of periapical abscess (26).

No optimal treatment has been defined for odontogenic sinusitis. The first step in its treatment is the complete removal of diseased tissues and debris in the involved sinus (1, 3). Surgical techniques from radical craniofacial surgery to simple endoscopic debridement or minimally invasive surgeries have been proposed in this regard (4). According to Felisati et al. (16), many patients can be successfully treated using an algorithm addressing maxillary sinus, removing implant or foreign bodies, and then repairing oroantral communication. Caldwell Luc approach or endoscopic medial maxillectomy (megaantrostomy) are necessary in some cases (28); however, patients rarely need systemic antifungal therapy. Although these cases do not respond to antibiotics, postoperative antibiotics are prescribed to prevent further infections.

Odontogenic sinusitis is an underdiagnosed disorder, especially when it appears among asymptomatic patients. Clinicians should be informed that fungal inflammation originates from dental procedures such as endodontic treatments, extractions, or placement of a dental implant. They should also be aware of the favorable conditions for fungal growth. In this regard, postoperative follow-ups are critical, and otolaryngologists need to consult oral surgeons to select the most appropriate treatment plan for exploiting the outcomes.