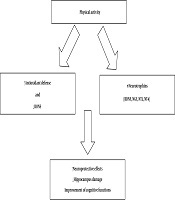 Effect of Physical Activity on Cognitive Function and Neurogenesis: Roles of BDNF and Oxidative Stress

Cognitive disorders are one of the most common neurological problems that can be caused by lifestyle patterns, especially sedentary lifestyle, poor nutrition, exposure to a variety of toxins or diseases.

There are various strategies recommended for the prevention and treatment of these disorders, including drug therapy, psychological therapy, dietary pattern changes, and physical activity.

It seems that physical activity with biological mechanisms can have beneficial effects on the central nervous system and improve cognitive function, including enhanced learning and memory, as well as reduced depression and anxiety.

The positive physiological effects of physical activity (PA) have caused this type of intervention to be considered as an appropriate way to treat some diseases, especially chronic non-communicable diseases (1, 2). Although the positive effects of physical activity on neurogenesis and cognitive function are less popular than on physiological functions, recent studies have shown that PA can have positive effects on cognitive function through structural and functional changes in the brain, especially in the hippocampus (3), this two to three sessions of moderate to vigorous PA per week can elevate hippocampus neurogenesis and reduce the weakening process of cognitive functioning (4, 5).

A review on how PA affects the nervous system and cognitive function suggests that PA, with their different nature, may affect the brain and its functions through molecular mechanisms, of which antioxidant, anti-inflammatory, and anti-apoptotic effects can be noted (8, 9). In this study, we have attempted to investigate the molecular mechanisms by which PA can affect cognitive functions.

2.1. The Effect of PA on Neurogenesis and Cognitive Function

One of the main effects of PA on the nervous system is neurogenesis (7). Recent studies have shown a significant association between neurogenesis and PA. The main molecular mechanisms to justify the improvement of cognitive functions induced by PA are the stimulation of neurotrophin production and neurogenesis. Neurotrophins are a family of growth factors primarily identified by their ability to protect neuronal survival (10). The family consists of at least four mammalian proteins, including neural growth factor (NGF), brain-derived neurotrophic factor (BDNF), neurotrophin-3 (NT-3), and neurotrophin-4.5 (NT4.5), which mainly form the activities of the nervous system and affect the peripheral and central nervous systems. In addition to protecting neuronal survival, neurotrophins regulate the maintenance and differentiation of neurons as well as the fate of cell division and neuronal death (11). Furthermore, neurotrophins are important regulators of neuronal growth and morphology. Although neurotrophins have been originally described as growth and survival factors, there are clear reasons to support their involvement in neural plasticity (12). Neurotrophins have a role in adaptive regulation of stimulation and inhibition of signaling, as well as changes in neural network reorganization, which are essential components of learning and memory. Among the neurotrophins, brain-derived neurotrophic factor (BDNF) has received more attention than others. BDNF was first isolated from the brain in 1982 and synthesized in 1989 (13). Adult BDNF is a secretory protein of 120 amino acids that is abundant throughout the brain and is mostly expressed in the hippocampus, brain cortex, cerebellum, thalamus, hypothalamus, and striatum (14). BDNF mediates a variety of functions, including neuronal survival, neurogenesis, cell death, axonal growth, connectivity, and plasticity. Also, it regulates physiological stimuli, such as light input to the eye, rapid stimulation or exercise, and BDNF synthesis. Thus, BDNF can convert physiological inducers of neural activity into molecular and morphological changes in the nervous system (15, 16).

Various studies have shown that some factors, such as PA and its induced stress, as well as diet, can affect the expression of many neurotrophic factors. PA enhances receptors and growth factors of the brain and prevents the decline of brain stem cells in the middle age.

Increased expression of the BDNF gene and its specific receptor (tyrosine kinase receptor B) in the hippocampus after aerobic exercise have been reported in animal models (17). Brain-derived neurotrophic factor levels have been shown to decrease in the pathology of Alzheimer’s disease and depression. Animal studies have shown that daily PA releases various neuro trophies, especially BDNF, in the brain, which is associated with increased learning speed and better retention after one week (18). The effects of PA on memory and learning are largely regulated by IGF-1 and BDNF (19). By inducing IGF-1 and BDNF, PA can enhance learning and memory, which is a possible mechanism of increased expression of NMDA receptors in new neurons. Exercise also reduces depressive-like behaviors in maternal separation rats by altering hippocampal NMDA receptor subunits (20, 21). NMDA receptors and the noradrenergic system (NE), peripheral IGF-1 (circulating), and possibly central derived IGF-1 (in the brain), mediate the induction of hippocampal BDNF by PA (22, 23).

These results suggest that BDNF signaling must be activated to elicit the effects of PA on hippocampal plasticity (24). Researchers, using IGF-1 inhibition, have found that IGF-1 signaling, along with BDNF, plays a key role in the effects of PA on hippocampal-dependent learning and synaptic dynamics (25). The effect of voluntary running in rats has been reported to significantly increase BDNF and neural plasticity (26).

Voluntary exercise-induced BDNF increases have reportedly been associated with improved learning and memory (27). The complexity of the movements included in the exercise program can also influence the expression level of BDNF. It was shown that after 14 days of physical exercise with a complex exercise pattern, BDNF expression was greater than that of the group with moderate-intensity exercise which performed the simple walking as their exercise program. Accordingly, the complexity of the activity may affect the process of stimulating BDNF secretion and justify the difference in neurogenesis after physical programs with simple to complex motility patterns (28). There is, however, evidence that compulsive exercises, in the animal models, can improve learning and are associated with increased neurotrophin levels (29).

A series of studies in this area show that in rodents, voluntary exercise training produces new granule cells in the hippocampus. These changes affect all aspects of neurogenesis, such as proliferation, differentiation, and life (30).

The positive effect of exercise on hippocampal BDNF gene expression and cognitive function in a model of neurotoxicity intoxication has been reported.

Aerobic training reduced memory impairment and learning in the amyloid-induced Alzheimer’s model. On the one hand, improved memory and learning were associated with increased BDNF and CREB gene expression (31). On the other hand, improvements in learning and memory have been reported in the exposure to environmental stressors and toxin without BDNF measurements.

Four weeks of running on a treadmill significantly reduced learning disabilities caused by immobility stress (32). In diazinon-poisoned rats, resistance training increased the expression of TRKB receptor protein as a specific BDNF receptor in the hippocampus (33).

2.2. The Effect of PA on Antioxidant Defense and Cognitive Function

Other mechanisms by which PA can affect the nervous system include the protective role of these exercises against free radicals and oxidative stress-induced injuries. PA has beneficial effects against free radical damage and is considered as an antioxidant intervention both in the human model and in the animal model (34, 35).

It is well known that the increase in free radicals and the resulting oxidative stress can predispose the individual to neurodegenerative injuries such as Alzheimerss and Parkinson’s disease (36, 37).

PA can promote antioxidant defense and decrease lipid peroxidation in both young and old people (38). Moderate-intensity physical activity can not only be beneficial in protecting against damage caused by oxidative stress, but it can also reduce the risk of neurodegenerative diseases (39). In this regard, optional exercise has been reported to reduce BDNF and negative effects on synapse plasticity, impaired spatial learning, and levels of reactive oxygen species induced by high-fat diets (40). In obese men, after aerobic exercise, BDNF levels and also MDA as a marker of oxidative stress, decreased (41). 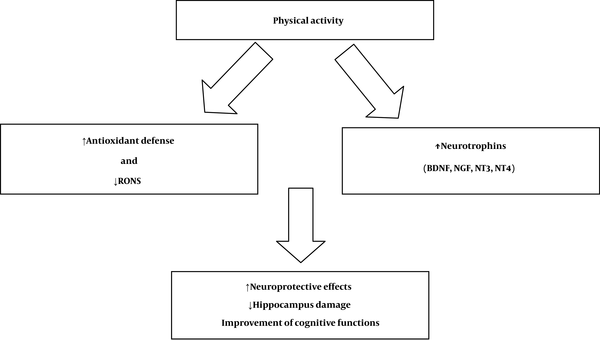 A review of studies on PA and neurogenesis shows that all types of PA can reduce structural and subsequently, functional changes in the central nervous system through different biological mechanisms. Therefore, it is recommended that regular physical activity be used as an economical, accessible, and beneficial strategy to inhibit age-related or neurotoxin-induced cognitive impairment. However, further studies are needed to understand the effects of this nonpharmacological intervention more clearly.

This article has been excerpted from a doctoral dissertation in the field of sport physiology approved by the Department of Sport Physiology of Islamic Azad University, Central Tehran Branch.

Copyright © 2020, Author(s). This is an open-access article distributed under the terms of the Creative Commons Attribution-NonCommercial 4.0 International License (http://creativecommons.org/licenses/by-nc/4.0/) which permits copy and redistribute the material just in noncommercial usages, provided the original work is properly cited.
download pdf 117.89 KB Get Permission (article level) Import into EndNote Import into BibTex
Number of Comments: 0