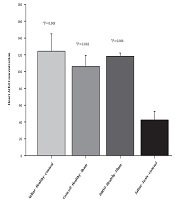 Chlorpyrifos is an insecticide that can induce acute and chronic toxicity against the heart by affecting acetylcholinesterase (AChE or acetylhydrolase). The present study investigated the independent and combined effects of aerobic training and eugenol consumption on heart AChE in chlorpyrifos-poisoned rats. A total of 56 healthy Wistar male rats were randomly and equally assigned to several groups receiving various treatments: saline healthy-control, corn oil healthy-sham, dimethylsulfoxide (DMSO) healthy-sham, saline-toxic control, saline-toxic-training, eugenol-toxic control, and eugenol-toxic-training. The study groups with toxic labels initially received chlorpyrifos injections for six weeks. Then they received other treatments according to their labels (i.e., moderate-intensity aerobic training five sessions/week for six weeks and/or 250 mg/kg eugenol). Twenty-four hours after the last treatment, rats were anesthetized, and their left ventricles were collected, frozen, and sent to the laboratory. The data were analyzed using one-way and two-way analysis of variance (ANOVA). A P-value < 0.05 was considered as a statistically significant difference between groups. The results showed that chlorpyrifos treatment decreased cardiac AChE. Besides, aerobic training and eugenol supplementation independently increased cardiac AChE in chlorpyrifos treated rats. The combination of aerobic training and eugenol consumption had no extra effect on the cardiac AChE level compared with each treatment alone in the rats exposed to chlorpyrifos. In conclusion, aerobic training and eugenol treatment had a positive effect on cardiac AChE in the rats poisoned with chlorpyrifos. So, these interventions may be beneficial to deter the chronic effects of chlorpyrifos on the heart. Future studies should also take into account several other factors related to cardiac health.

Nowadays, the widespread use of organophosphorus insecticides has resulted in the accumulation of toxic materials, environmental problems, and acute and chronic poisoning (1). Chlorps, as organophosphorus compounds, are usually used as agricultural pests, beside their sterilization and industrial applications. Like other organophosphates, chlorpyrifos produces toxic effects mainly by inhibiting acetylcholinesterase (AChE or acetylhydrolase) activity (2).

AChE is a cholinesterase enzyme in the body, which catalyzes the breakdown of acetylcholine and some other choline esters. Previous research showed that elevated levels of acetylcholine (Ach) in the rats treated with a cholinesterase inhibitor could increase heart vagal control and consequently decrease heart failure and ventricular dysfunction (3). In another study on patients with heart failure, it was shown that short-term administration of a cholinesterase inhibitor decreased ventricular arrhythmias and increased heart rate variabilities (4). On the other hand, the synaptic accumulation of ACh following AChE inhibition triggered prolonged stimulation of cholinergic receptors and cardiac problems such as bradycardia, transitory discontinuation of heartbeats (vagal escape) via the sinus effect, decreased atrioventricular conduction, and weakened atrium contractions (5, 6).

Several studies have examined the protective effects of aerobic exercise and eugenol (an aromatic oil extracted from cloves) consumption on the heart (7-9); however, most studies have focused on the brain and neglected the heart. Previous studies showed that aerobic exercise and eugenol supplementation had positive effects on the AChE level (10-12).

Eugenol has been noted to act as a cytoprotective agent against As2O3-induced cardiotoxicity (13). On the one hand, there is inadequate research on the effects of aerobic exercise and eugenol consumption on cardiac AChE in chlorpyrifos-poisoned rats; and on the other hand, some interventions may have synergic effects when they are administered together.

So, we here aimed to assess the combined effects of aerobic exercise and eugenol supplementation on the cardiac AChE level in the rats treated with chlorpyrifos.

The present study was based on a MSc thesis registered in Islamic Azad University (Central Tehran Branch, Iran), and it was approved by the university’s Ethics Committee (no.: 1012911712337521398162268642). Animal experiments complied with the ARRIVE guideline. This study was conducted according to the National Institutes of Health (NIH) publication, and all ethical principles regarding laboratory animals were considered. Rats were kept in standard animal houses (12 hours of light and 12 hours of darkness, 23°C ± 3°C temperature, and approximately 50% humidity). The animals were kept in standard cages that their floors were covered with wooden foil and had free access to standard food and water.

Fifty-six healthy Wistar male rats (eight weeks old, 180 - 220 g weight) were randomly and equally assigned to seven different groups, including saline-healthy-control, corn oil-healthy-sham, dimethylsulfoxide (DMSO)-healthy-sham, saline-chlorpyrifos-control, saline-chlorpyrifos-training, eugenol-chlorpyrifos-control, and eugenol-chlorpyrifos-training. In the groups receiving chlorpyrifos, the animals were treated with chlorpyrifos for six weeks. Then they received other interventions based on their group assignments for additional six weeks. At the end of experiments, all the interventions (i.e., exercise, chlorpyrifos exposition, and eugenol supplementation) were discontinued for 24 hours to eliminate their acute effects. Next, the rats were anesthetized with ketamine and xylazine (injected intraperitoneally, 30 - 50 mg/kg body weight ketamine and 3 - 5 mg/kg body weight xylazine). The left heart ventricle was removed, washed by saline, cut into three slices, which were immediately frozen in liquid nitrogen. All the samples were stored at -80°C for further analysis. The level of AChE in the left ventricle was measured using a previously described method (14).

Chlorpyrifos (C9H11Cl3NO3PS) was purchased from Sigma-Aldrich (CAS no.: 2921-88-2, the USA). Chlorpyrifos was first dissolved in DMSO and subsequently diluted with 0.9% saline in order to avoid DMSO concentration exceeding the 0.01% v/v final concentration. Finally, DMSO-dissolved chlorpyrifos was intraperitoneally injected to rats (3.0 mg/kg) for six weeks (five days/week). The rats in the DMSO-toxic-sham group received an equal volume of DMSO diluted in 0.9% saline at the same time and duration of chlorpyrifos injection.

The animals were fed with eugenol dissolved in corn oil (250 mg/kg body weight, five days a week for six weeks) by gavage (15). Corn oil-toxic-sham group received 10 mg/kg of corn oil at the same time and duration of eugenol supplementation.

The rats in the exercise groups were orientated with motorized rodent treadmill for two weeks (nine m/min, and 10 min/day). After a 2-week of familiarity period, the rats performed four-week running on a treadmill by observing the overload principle (20 m/min, 26 min/day, five days/week). They also had 5-min warming-up and 5-min cooling-down before and after each session, respectively.

The results of the Shapiro-Wilk test showed that the data had a normal distribution. The Levene’s test confirmed the equality of variances. All results were expressed as means ± standard deviations (SD). One-way analysis of variance (ANOVA) was used to assess between-group differences. Two-way ANOVA was used to determine the effects of training, eugenol supplementation, and training + eugenol supplementation. Between-group effects were determined by a suitable post-hoc test. In addition, the effect size (partial η2) was reported to emphasize the size of the difference rather than the confounding impact of the sample size. All statistical analyses were performed in SPSS software (version 22), considering a significance level of P > 0.05.

The results of one-way ANOVA showed that there were significant differences between healthy-control, healthy-sham, and toxic–control groups comparing cardiac AChE levels (F = 15.04, P = 0.001; partial η2 = 0.84) (Figure 1). The rats treated with chlorpyrifos showed significant reduction in the cardiac AChE level compared to the animals in the saline-healthy-control (P = 0.001), corn oil-healthy-sham (P = 0.002), and DMSO-healthy-sham (P = 0.001) groups. Differences between other groups were not statistically significant (Figure 1). 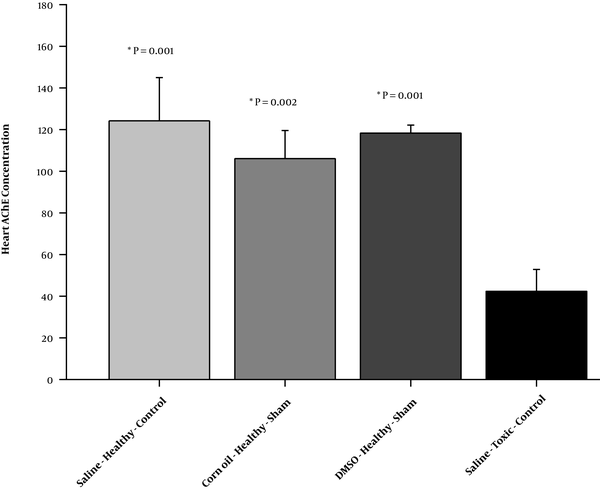 Cardiac acetylcholinesterase (AChE) (ng/mL) in saline-healthy-control, corn oil-healthy-sham, DMSO-healthy-sham, and saline-chlorpyrifos-control groups. There were eight rats in each group. The data were expressed as means ± standard deviation (SD) and analyzed using one-way ANOVA. *, A significant decrease vs. the saline-chlorpyrifos-control group. 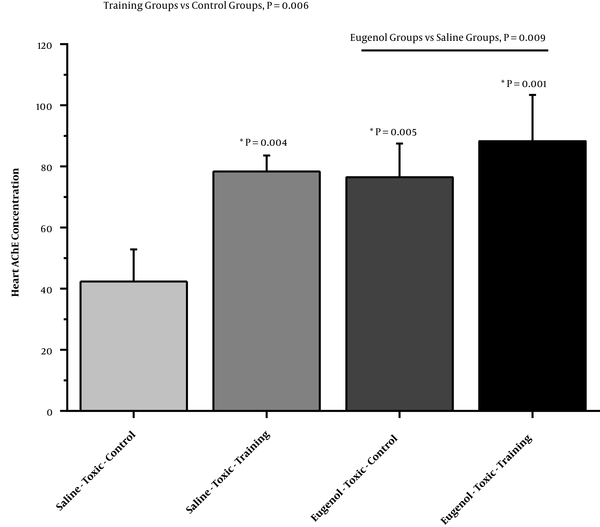 The results of the present study showed that chlorpyrifos-induced toxicity significantly decreased cardiac AChE. In addition, six weeks of either aerobic exercise or eugenol supplementation alone improved the cardiac AChE level in the rats treated with chlorpyrifos.

In normal conditions, exercise and eugenol consumption could decrease AChE and consequently increase ACh, improving neuromuscular function and other related factors (10-12). Experimental/clinical studies suggested that AChE inhibitors improved autonomic and cardiac function. These cardioprotective effects are mediated via several mechanisms such as augmenting the beneficial effects of ACh on arrhythmia and modulating apoptosis, oxidative stress, inflammatory factors, etc. (16), protecting against heart failure. On the other hand, several studies showed that dramatic falls in AChE levels could lead to detrimental effects (17). Acetylcholine molecules that do not immediately bind to a receptor or those released via receptor-mediated reactions are rapidly hydrolyzed (in less than one msec) by AChE. Almost fifty percent of released ACh is hydrolyzed into choline and acetate before binding to the receptor (18-24). Choline is taken up by nerves’ terminals and reused for ACh synthesis. Thus, large decreases in AChE activity could be detrimental. Particularly, ACh accumulation in the synaptic cleft during intense synaptic activity suppresses the generating of muscles’ action potentials (17). It has been shown that the lack of AChE results in mild phenotypic abnormalities and low muscle weight and reduces the cross-sectional area of myofibers and the absolute maximal isometric force (19-22). In addition, AChE deficiency has been associated with muscle weakness (23) and neuromuscular junction dysfunction (24) in humans.

Another study indicated that AChE deficiency could lead to muscle dysfunction (25). In the present research, exposition to chlorpyrifos remarkably decreased cardiac AChE in rats, which was reversed by exercise and eugenol consumption, showing the protective effects of these interventions against chlorpyrifos-induced cardiac toxicity. To the best of our knowledge, no study has yet investigated the effects of exercise and eugenol supplementation on the chlorpyrifos-induced reduction of cardiac AChE. However, some studies have examined the effects of high intensity/fatigue exercises on this enzyme (26, 27). For example, Wen et al. (26) evaluated the effects of exercise-induced fatigue on the expression and activity of AChE. Their results showed that the expression of gastrocnemius neuromuscular junctions and AChE activity were temporarily reduced by exercise-induced fatigue and then increased over 24 hours (21). In another report, eugenol was shown to be a beneficial agent against As2O3-induced cardiotoxicity (13).

The results of the present study showed that aerobic exercise and eugenol supplementation, either alone or in combination with each other, mitigated the adverse effects of chlorpyrifos on cardiac AChE activity, but not to normal levels. It is obvious that these interventions were not sufficient to fully reverse the high-dose toxic effects of chlorpyrifos, which indicates the need for complementary medications. This study demonstrated that exercise and eugenol consumption had positive effects on cardiac AChE in a toxic environment. So, these interventions may be considered for reversing the chronic effects of chlorpyrifos on the heart. As a limitation of this study, we evaluated only a few factors associated with cardiac function. Future studies should take into account several other factors related to the heart’s health, such as apoptosis, oxidative stress, and inflammatory mediators.

The present study suggests aerobic training and eugenol supplementation as strategies to protect cardiac AChE against toxic agents such as chlorpyrifos. The combination of aerobic training and eugenol consumption had no extra effects on cardiac AChE in chlorpyrifos-treated rats compared with each intervention alone. These interventions could be considered as therapeutic modalities to protect the heart against the chronic effects of chlorpyrifos. Future studies should focus on several other factors related to cardiac health.

The authors would like to express their heartiest thanks to MAA PhD for helpful comments.