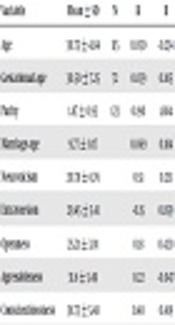 Maternal-fetal attachment (MFA) is the first relationship between a mother and her child, which generally begins during pregnancy. The maternal psychological state affects fetal growth and health. MFA is associated with the mental and psychological condition in pregnant women.

The aim of this study was the estimation of the variance of MFA, according to the personality traits in pregnancy.

Using a descriptive correlational study design, we studied pregnant women who were more than 24 weeks pregnant and were referring to the obstetric ward of the Kowsar Hospital, Shiraz, Iran, during May to June 2015. The sample size was estimated to be 200 women by Morgan’s table. A total of 29 participants were removed due to incomplete questionnaires, and 171 participants were selected. Data collection tools included demographic obstetric questionnaires, including obstetric information and demographic data, Cranly’s MFA scale, and NEO personality scale. Data were analyzed by the Pearson correlation coefficient and multiple regression, by using SPSS version 16.

Personality traits (except agreeableness) predict MFA for pregnant women. In addition, the psychological health of the mother and baby can be improved by identifying mothers based on personality traits, and therefore, by promoting behavioral attachment, health care providers should identify mothers who need additional psychological support during their pregnancy.

For each woman, motherhood is the experience of the unique relationship between a mother and her fetus, which begins during pregnancy (1). Attachment is centered on the emotional bonds between people (2). The maternal-fetal attachment theory has been proved a strong relationship between parents and fetus before the child’s birth (3). With the increase of MFA, mothers are more likely to perform health behaviors during pregnancy, such as stop smoking, alcohol withdrawal, proper nutrition, doing exercise, continuing prenatal care, willingness to know the fetus, and participating in the preparation of childbirth classes; increasing MFA and breastfeeding lead to a satisfactory outcome of pregnancy and improving maternal-fetal health (4). Maternal-fetal emotions and sensation will be increased mentally and physiologically during pregnancy (5). Maternal-fetal attachment is closely related to a mother’s psychological health (1). The mother’s mental health during pregnancy plays an important role in the primary performance of the future child’s mental health (6).

Several factors have an affect on MFA, for example anxiety, psychiatric diseases, depressive disorders, and schizophrenia (7). Personality is a basic topic in psychology. Personality disorders can affect all parts of behaviors in people (8). Five personality traits that are explained by Costa and Mccrea: neuroticism, extraversion, openness to experience, agreeableness, and conscientiousness (9). Hart & McMahon (10) suggested that the mother’s mood and the MFA plays an important role in the future child’s health. Mother’s sense and the relationship with the unborn child have a direct connection with the mother’s mental health; thus, identifying the mothers is significantly important in order to be more supported for a safe pregnancy (11). The mother’s negative feelings during the last eight months of pregnancy will be a useful predictor for the future of the child’s health (12, 13). In this regard, attachment behaviors training and relaxation methods increase the maternal-fetal attachment. Life satisfaction, social support (14), some demographic and prenatal variables such as parity, age of mother, and parents’ education influenced MFA during pregnancy (15). Since studies have shown a significant relationship between mental health and personality traits (16, 17), awareness of these traits may be a good predictor for MFA. It is necessary to determine MFA behaviors in pregnant women.

The prediction of maternal-fetal attachment, according to the personality traits in pregnant women, is the aim of this study.

We studied 171 pregnant women with the gestational age of above 24 weeks of pregnancy who referred to the obstetric department of the Kowsar Hospital in Shiraz, Iran, from July to Oct 2015, for three months, and were chosen by purposive sampling. The tools in this research included a demographic obstetric questionnaire, Cranly’s MFA questionnaire, and NEO personality questionnaire.

Our inclusion criteria included: pregnant women with age between 18 - 40 years old, an education above a diploma, Iranian nationality, gestational age of above 26 weeks, single pregnancy, and no obstetrics problems. All participants have been evaluated on their mental health by interview; they didn’t have an acceptable status of mental health.

Exclusion criteria were a history of infertility, prior history of chronic, psychologic, or physical illness, history of psychosis or active psychiatric diseases, or taking psychiatric agents in women.

In this study, we obtained the approval of the Ethics Committee of the Islamic Azad University of Shiraz. We assured the pregnant women about the confidentiality of the data, and informed consents were obtained from all participants. After explaining the objectives of study to the mothers and obtaining written consent (regarding the ethics for medical research), sampling was performed. The sample size of the study was determined to be 200 women with Morgan’s table. After collecting the questionnaire, there were 171 participants in the study.

What was included: mother`s age, gestational age, and parity.

This questionnaire is used for the rapid evaluation of five major personality traits, including extraversion, neuroticism, openness to experience, agreeableness, and conscientiousness. This questionnaire contains 60 items (12 items per domain). The items were graded using a 5‐point Likert scale (0 = strongly disagree, 1 = disagree, 2 = neither agree nor disagree, 3 = agree, and 4 = strongly agree). The score of each domain ranged from zero to 48, and the total score was calculated by summing the scores. Costa and McCrae (18) confirmed the validity of NEO‐FFI and its reliability was reported as follows: neuroticism = 0.83, extraversion = 0.75, openness = 0.80, agreeableness = 0.79, and conscientiousness = 0.79.

At first it was used by Cranley, and its validity (0.85) was confirmed (20). Jamshidi Manesh et al. (21) confirmed the validity (0.83) of the Persian version using content validity; this questionnaire consisted of 24 statements graded by 5-point Likert scale: strongly agree (5), agree (4), not sure (3), disagree (2), and strongly disagree (1). Question No. 22 was reverse scored. The minimum and maximum scores were 24 and 120, and higher scores indicated stronger attachment. Data were analyzed through the SPSS software (version 17) and descriptive, analytical statistics, including the Pearson correlation coefficient and multivariate regression tests.

Personality traits predicted almost 33% of the variance of MFA.

Between the component of demographic variables, they did not predict MFA.

In this study, conscientiousness indicator predicts about 24% of maternal-fetal attachment. Since people with conscientious traits are desirably single-minded, determined, and have power in planning and organizing responsibilities (24), a high fetal attachment is logical for his/her care. In this regard, Shaver and Brennan (25) performed that the prominent five personality traits are good predictors for mother-child attachment styles.

Almost 13% of the variance in the maternal-fetal attachment is predicted positively by openness to experiences. Such people have a power of aesthetic feeling, intellectual curiosity, and experienced life; they experience positive and negative emotions more than others do.

About 17% of maternal-fetal attachment is predicted positively by Neuroticism. Although this indicator shows different types of emotional distress such as social phobia, depression, and anxiety, it should not be used as a measure of mental disorders (24).

In this study, only 3% of maternal-fetal attachment is predicted by agreeableness negatively.

One of our study limitations was that the information of this study was acquired only by the questionnaire. The accuracy of the recorded mental health histories, especially concerning psychosis or active psychiatric diseases, was another limitation.

As the mental health of the mother can be improved by identifying mothers based on personality traits, in order promoting behavioral attachment (MFA), health care providers play an essential role in improving social health and providing pregnancy services.

We appreciate the staff at the Midwifery and Obstetrics Department of Kowsar Hospital in Shiraz, Iran, for their help and support.

Copyright © 2019, Author(s). This is an open-access article distributed under the terms of the Creative Commons Attribution-NonCommercial 4.0 International License (http://creativecommons.org/licenses/by-nc/4.0/) which permits copy and redistribute the material just in noncommercial usages, provided the original work is properly cited.
download pdf 140.97 KB Get Permission (article level) Import into EndNote Import into BibTex
Number of Comments: 0