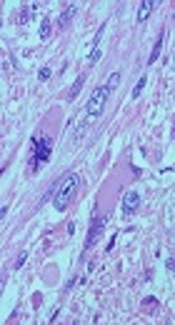 A 41-year-old man was referred to our Hospital with a two-year history of persistent left shoulder pain. His pain could be moderately relieved by taking simple analgesics. No prior history of trauma or recent fever, weight loss, and night sweats were detected and his medical history was otherwise insignificant.

Initial physical examination revealed no sign of local tenderness, swelling, or lymphadenopathy. Motor and sensory functions were intact, and the shoulder range of motion was within the normal limits. Laboratory investigations were normal for complete blood count, electrolytes, erythrocyte sedimentation rate (ESR), and C-reactive protein (CRP). For further evaluation, radiological investigations were performed indicating a proximal lesion of the left humerus with a periosteal reaction. No sign of reactive sclerosis or ossification was evident.

Bone cancer and metastatic tumors were considered the main differential diagnoses. Core needle biopsy of the lesion was performed later and its result was in favour of primary leiomyosarcoma of bone as underlying pathology. Subsequently, complete resection of the lesion and prosthetic replacement of the proximal humorous were performed. The resected tumor was sent to the pathology department for histopathological evaluations. The tumor specimen was a multinodular cream-grayish tissue with elastic consistency attached to humorous head and neck, measuring 6 cm in maximal diameter (Figure 1). Microscopic examinations showed infiltration of a neoplasm composed of highly atypical large bizarre pleomorphic cells some with moderate amount of cytoplasm arranged in fascicular, storiform, and diffuse pattern (Figure 2). Mitotic figures were frequent with 16/10 high power field mitotic count including atypical forms. The immunohistochemical staining was positive for vimentin, caldesmin, desmin, smooth muscle actin (SMA), alpha 1-antitrypsin, and epithelial membrane antigen. These findings confirmed the diagnosis of primary leiomyosarcoma of proximal humerus in this patient. The patient was followed for 3 months after surgery, and no sign of local recurrence or metastatic lesions were detected. 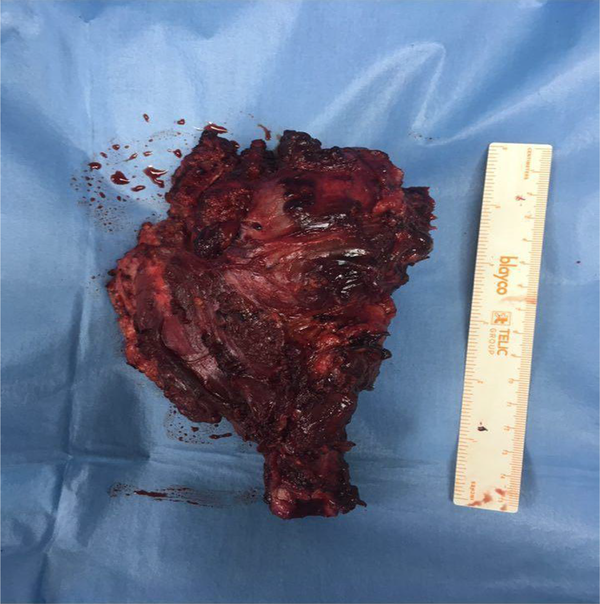 The Resected Tumor Attached to Humorous Head and Neck 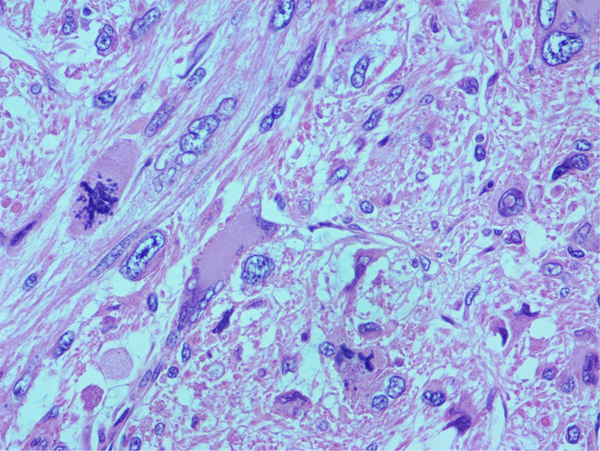 Here we presented a rare case of primary leiomyosarcoma of the proximal humerus in a middle-aged man that was successfully treated by surgical resection of the tumor. Leiomyosarcoma of bone is an uncommon bone neoplasm with a prevalence rate of less than 1% among all types of malignant bone tumors (3). Persistent pain is the main cause of referral in the affected patients. Regional swelling is common. Pathologic bone fracture has also been reported in these patients (2).

By improvement of diagnostic tests and pathological examinations in recent years, the number of cases diagnosed with primary leiomyosarcoma has increased notably. Characteristic radiographic findings in primary leiomyosarcoma are osteolytic lesion with moth-eaten appearance and indistinct margins (2). Irregular cortical erosions may be apparent, but sclerosis and periosteal reaction are less common (3). Excisional biopsy and Immunohistochemical evaluations are often required for confirming the diagnosis (4).

Major differential diagnoses of the leiomyosarcoma of bone are metastatic carcinoma of unknown primary origin, lymphoma, and osteosclerotic myeloma. It is important to differentiate between leiomyoma and leiomyosarcoma especially when a previous history of benign leiomyoma exists (5).

Surgical resection with a wide margin is the main treatment option for primary leiomyosarcoma of bone. Therapeutic benefits of chemotherapy and radiotherapy are still unclear (3). Local recurrence of the tumor is uncommon, but the risk of distal metastasis is relatively high especially in patients with high-grade tumors (2). Tumor stage is the main predictor of long-term outcome, but it seems that the 5-year overall survival rate of primary leiomyosarcoma of bone is 59% that is similar to other common bone sarcomas (2).

Copyright © 2017, Thrita Journal. This is an open-access article distributed under the terms of the Creative Commons Attribution-NonCommercial 4.0 International License (http://creativecommons.org/licenses/by-nc/4.0/) which permits copy and redistribute the material just in noncommercial usages, provided the original work is properly cited.
download pdf 3.45 MB Get Permission (article level) Import into EndNote Import into BibTex
Number of Comments: 0