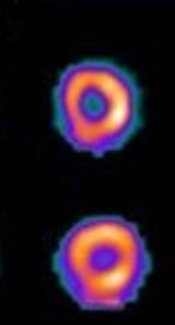 Transient ischemic dilatation (TID) of the left ventricle is a non-invasive marker of suspected or known Coronary Artery Disease (CAD), and is used for the prediction of prognosis. Because the value of TID has been emphasized by current publications in clinical nuclear cardiology field, the current review of the literature was conducted to present comprehensive overview on the findings in this field.

Stress-induced subendocardial hypoperfusion, post-ischemic stunning, and impaired coronary flow reserve have been reported as common causes of TID. Transient Ischemic Dilatation can be easily measured by available automatic software on the market, including Emory Cardiac Toolbox, 4D-MSPECT, etc. A close correlation between TID and LV volume/function has been emphasized by previous researchers. Transient Ischemic Dilatation, in the setting of a cardiac SPECT MPI with abnormal findings, has been known to be a robust indicator of severe/extensive CAD and future cardiac events. However, only a limited number of publications are available for its probable use in the setting of normal MPI, especially based on patients at high-risk and those with TID.

By using an upper limit value of TID that is derived according to the optimum imaging procedure of a particular laboratory, routine reporting of TID measurement as part of conventional SPECT MPI analysis may be useful.

Cardiac single photon emission computed tomography myocardial perfusion imaging (SPECT MPI) is a useful non-invasive imaging test for evaluation of suspected or known coronary artery disease (CAD). It offers advantages to clinicians by combining evaluation of myocardial perfusion pattern and functional status of the left ventricle (LV). Additionally, stress-induced ischemic LV dysfunction may be demonstrated by transient ischemic dilatation (TID) of LV. It can be measured by dividing the volume of the endocardial surface of the LV cavity on cardiac images obtained at post-stress and rest conditions. Measurement of TID can be performed by commercially available software without additional cost burden and radiation risk for the patients. Currently, TID is recognized as one of the novel indicators of severe/extensive CAD and cardiac events (e.g., non-fatal myocardial infarction and cardiac death), as well as their prognosis (1-3). Several current reports have emphasized that TID could be used as a powerful marker even when cardiac MPI indicates the presence of a normal myocardial perfusion (4, 5).

Normally, the size of left ventricular cavity on a rest perfusion imaging is larger than detected on stress perfusion imaging. In 1980, by a case series with 3 patients, Stolzenberg et al. described the dilation of left ventricular cavity on a thallium scan that was characterized by increased diameter of LV cavity at stress when compared to the rest condition (6). They interpreted that this finding could be useful to get rid of false negatives that cause balanced lesions. The definitive mechanism of formation of this phenomenon is still controversial. However, it seems to emerge as a result of various processes, which may be pathological and physiological. The most often-accused ones are absolute LV cavity dilatation and myocardial stunning, caused by ischemia, systolic LV dysfunction, stress-induced subendocardial hypoperfusion, and impaired coronary flow reserve (7, 8). In a study on the pathophysiology of TID performed by Emmett et al., they reported that a high TID ratio is associated with subendocardial hypoperfusion and/or impaired coronary flow reserve rather than chamber enlargement of the ventricle or myocardial stunning (7). In a series with 282 patients, Bestetti et al. reported that a post-stress, end-systolic ventricular dilation was detected on the SPECT MPI study, which was compatible with endocardial post-ischemic stunning, and these patients had more functional and anatomic abnormalities caused by CAD (8).

The relationship between the TID ratio and the volumetric measurements of the LV function has been evaluated by previous authors (7, 13-18). Emmett et al. (7) identified a good correlation between echocardiographic and gated SPECT MPI measurements for LV end-diastolic volume (LVEDV), LV end-systolic volume (LVESV) and LV ejection fraction (LVEF) values at rest. Although there was no a significant change in the functional and volumetric measurements obtained from the echocardiography (ECHO) for the TID negative group, a significant decrease in differential LVEF values obtained from SPECT MPI for the TID positive group was observed, yet, this was not detected in the concurrent ECHO measurements. Demir et al. (15) showed that transient left ventricular contractile dysfunction could develop during both exercise and pharmacological stress and they found a good relationship between TID ratios and LVEF values. A study by Del Val Gomez et al. (16) revealed that post-exercise LVEF values increased in patients with normal and fixed perfusion defects yet decreased in patients with reversible perfusion defect. Heston et al. (17) investigated the effect of relative contribution of LVEDV and LVESV ratios (post-stress to rest ratios) on TID value in a gated SPECT MPI. They found that there was better correlation for the LVEDV ratio than LVESV ratio and an optimized stress-induced volume ratio (LVESVx5.0 + LVEDV) was the most strongly correlated parameter. Hung et al. (18) showed that LVEDV and LVESV values were higher, yet, LVEF values and wall motions were lower with the post-stress condition than at rest in patients with high TID. They concluded that the enlargement of LVESV is the most potent effect on TID.

An elevated TID ratio is closely associated with the presence of epicardial coronary stenosis and severe CAD, as a sensitive and specific quantitative indicator. Previous studies have clearly shown that the TID ratio can provide important predictive and prognostic information for identification of severe and extensive CAD as well as future cardiac events such as non-fatal myocardial infarction or cardiac death (5, 8-10, 19, 20). On the other hand, information on the use of TID ratio in patients undergoing CR is limited to a few studies. In the most notable, the authors (13) viewed the role of TID to determine presence of severe CAD and poor prognosis in patients with revascularization and without revascularization. They concluded that TID could be connected with high frequency of non-fatal MI and used as a predictor of multi-vessel CAD. They also suggested that it might be associated with a good clinical outcome in patients with CR. Some authors (16) have stated that patients with transient LV dysfunction might benefit from revascularization due to presence of reversibility.

Upper normal limit of TID was provided by several researchers to define significant CAD. However, range of normal limits and applicable threshold value can vary due to variables such as gender, type of the imaging protocol and automated software, characteristics of the patient cohort, etc. Abidov et al. (19) described that the TID ratio, measured automatically, is a good indicator of serious and widespread CAD. They found that a 1.36 threshold value for TID obtained from a stress SPECT MPI test in low risk patients had high sensitivity (73%) and specificity (88%) to demonstrate severe and common CAD. In addition, ratio of serious and common CAD in patients, who have no abnormal TID value and perfusion defects, was found to be low (1.3%), yet, otherwise it was significantly higher (65%). Mazzanti et al. (20) also defined TID as a clinical marker of serious and widespread CAD with a high sensitivity (74%) and specificity (95%). In this series, the best cut-off of TID was found to be 1.21. There was also a strong correlation between the size of perfusion defects and the TID measurement levels. Another study (21) was performed on 547 patients with suspected and known CAD, using 99mTc-MIBI rest/stress protocol to determine normal limit values of TID. For a group of patients with low-risk, the upper limit value of TID was calculated as 1.19 for an ungated study and 1.23 for a gated study. They found that the incidence of high TID value was 2% in normal patients, yet, increased to 36% in patients with severe CAD. A 1.19 threshold value was also determined by Kakhki et al. (9), using the Emory Cardiac Toolbox to be the upper normal limit of TID ratio in a 2-day dipyridamole stress/rest SPECT MPI test using 99mTc-MIBI. They reported that higher TID ratios were measured in cases with partial reversible defects or multi-vessel disease or perfusion abnormalities on the LAD artery territory. A high TID ratio was found to be an independent predictor of ischemia and territory perfusion abnormality. Duarte et al. (10) measured TID values of the LV on the stress/rest 99mTc-MIBI SPECT MPIs, using Auto QUANT software in patients with low probability and significant transient defect. The TID limits were between 0.13 and 1.01 for low-risk patients and between 0.17 and 1.18 for patients with significant transient defect. However, the highest positive predictive value to detect the widespread myocardial ischemia was obtained when the TID ratio was more than 1.25. Azambuja et al. (11) evaluated the difference for the average TID values between exercise stress testing and pharmacologic stress testing by the 4D-MSPECT software. In this study, 200 patients were studied in 2 groups of patients having similar properties. Mean values of TID were calculated to be 1.06 ± 0.23 for exercise stress testing and 1.10 ± 0.22 for dipyridamole stress testing and there was no a statistically significant difference between the values. In the current study (12), the usefulness of TID to determine significant obstructive of CAD in patients with prior coronary revascularization was evaluated. It was found that a 1.20 threshold of TID was a robust indicator of restenosis and had an accuracy of 87%.

Literal information on the clinical significance of TID in patients with a normal MPI study is limited. According to the proposals of these few studies, TID value in the patients without apparent risk or an otherwise normal SPECT MPI test could give prognostic information for future cardiac events, if found higher than the defined threshold of TID (4, 5). In a study performed on 1560 patients, who had the MPS stress test in normal limits, the prognostic value of TID to predict hard and soft cardiac events were evaluated (4). This study showed that an entirely normal MPI test finding was not always consistent with an excellent prognosis, and TID had independent and incremental prognostic value to suggest the risk of total cardiac events in this patient population. They offered to be appropriate for patients with TID in the presence of typical angina, the elderly, and patients with diabetes. Another study of 1236 patients with normal myocardial perfusion, LV volume, and function revealed similar findings for prognostic value of TID (5). However, they found that incidence of TID was high in high-risk populations with diabetes and significant CAD.

Transient ischemic dilatation is an important marker of severe/extensive CAD and has prognostic value to predict the risk of cardiac events. By using an upper limit value of TID that was derived according to the optimum imaging procedure of a particular laboratory, routine reporting of TID measurement as part of conventional SPECT MPI analysis may be useful.

Copyright © 2017, Thrita. This is an open-access article distributed under the terms of the Creative Commons Attribution-NonCommercial 4.0 International License (http://creativecommons.org/licenses/by-nc/4.0/) which permits copy and redistribute the material just in noncommercial usages, provided the original work is properly cited.
download pdf 96.42 KB Get Permission (article level) Import into EndNote Import into BibTex
Number of Comments: 0