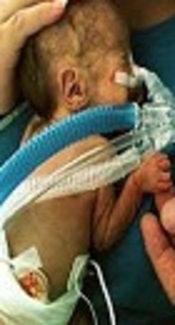 Respiratory distress syndrome (RDS) is one of the most common respiratory disorders among premature infants. Despite recent developments in the application of corticosteroids for preventing RDS, their superiority and possible complications have remained controversial.

In this randomized clinical trial, infants with confirmed diagnosis of RDS were randomly allocated into 2 groups. The first group underwent treatment with intravenous dexamethasone (0.15 mg/kg every 12 hours), and the second group received NAC nebulizer (400 mg every 8 hours) as well as intravenous dexamethasone for 3 to 5 days. Treatment duration, disease and drug complications, number of received doses as well as response to treatment (based on oxygen dependency and need for reintubation), and mortality rates were recorded in a checklist.

Also known as hyaline membrane disease (HMD), respiratory distress syndrome (RDS) is one of the most common respiratory disorders among premature infants. It usually occurs in infants with gestational ages of less than 37 weeks; however, it may be present in infants with higher gestational ages due to premature lungs (1). RDS is majorly resulted from alteration in Surfactant production, so most patients will be dependent on mechanical ventilation and Surfactant injections which decreases the time needed for intubation (2, 3).

Despite recent developments in application of corticosteroids for preventing RDS and its acceptable results, there are also concerns about superiority of benefits on possible complications that has made corticosteroid use a controversy (4, 5). Dexamethasone is a widely used systemic corticosteroid in RDS, which is being evaluated in many controlled clinical trials, and evidences have shown that using dexamethasone after birth has positive effects on improving respiratory functions of neonates, especially those under mechanical ventilation (6). Nonetheless, optimal time of dexamethasone administration has not been clarified yet (7). In previous studies, it has been concluded that treatment with dexamethasone should not be considered as a routine option for preventing or managing chronic respiratory diseases because it may lately result in neuromotor or cognitive disorders (8, 9).

N-Acetyl cysteine (NAC) is an antioxidant and antimucus agent which increases glutathione in cellular level and leads to destructing mucoprotein chains in lung mucus and loosing thick layers of mucus. Mucolytic agents help with cleaning respiratory discharges and improve respiration. This cleaning decreases the chance of growth for secondary bacteria. Effects of NAC have been studied in a variety of diseases such as cystic fibrosis, chronic bronchitis, noncystic fibrosis, pulmonary fibrosis, and many other medical conditions. Previous studies have concluded that NAC inhalation decreases hospitalization duration in infants with acute bronchiolitis, but it has not been yet assessed in RDS (10). Thus, in the present study we aimed at assessing the effect of inhaler NAC on respiratory distress syndrome by comparing it with intravenous dexamethasone.

This randomized clinical trial was conducted between September 2014 and August 2015 in Najmiyeh hospital, Tehran, Iran. The present study was registered at ethics committee of Islamic Azad University (Reference code: IR.IAU.PS.REC.1392.24) and Iranian registry of clinical trials (Reference code: IRCT2016101917413N2). Figure 1 displays a flowchart of the trial. Infants with confirmed diagnosis of RDS based on chest radiography, respiratory rate, arterial blood gas (ABG), first and fifth minutes Apgar scores, grunting, cyanosis, and physical examination by a single neonatologist were assessed for eligibility in the first 4 hours of life. Patients with congenital or chromosomal anomalies, death before 72 hours of life, early sepsis, hemorrhagic events or those whose parents did not wish to participate in the study were excluded. Infants with the following criteria were included in the study: Infants with gestational age of less than 36 weeks, those in need of mechanical ventilation for at least 2 days, with birth weight between 1000 and 2500 gr, and those who required oxygen saturation of more than 30% after extubation. All the baseline characteristics as well as demographic information were recorded in a predesigned checklist. Study process was explained to all parents and a written consent was obtained. After respiratory protection for 3 to 5 days and after extubation, infants were randomly allocated into 2 groups using random number table. The first group underwent treatment with intravenous dexamethasone (0.15 mg/kg every 12 hours) and the second group received NAC nebulizer (400 mg every 8 hours) as well as intravenous dexamethasone for 3 to 5 days. Treatment duration, disease and drug complications, and number of received doses as well as response to treatment (based on oxygen dependency and need for reintubation), and mortality rates were recorded in a checklist.

Table 2. Incidence of Disease Complications Among the Studied Individualsa

Table 3. Incidence of Treatment Complications in the Studied Individualsa Trend of Respiratory Rate During Intervention

In the present study, we found no significant difference between dexamethasone alone and dexamethasone with N-Acetyl cysteine nebulizer for the treatment of respiratory distress syndrome in infants; however, both groups showed a significant response to treatment. This positive effect was seen for respiratory rate, mean arterial oxygen saturation, oxygen dependency after extubation, and a need for reintubation. Treatment goal for respiratory rate has been mentioned as less than 60 per minute in previous studies which was achieved in our both study groups as well. In both dexamethasone and NAC groups, mean oxygen saturation (based on pulse-oxymetry) was maintained between 90% to 92% in preterm infants weighting lower than 1250 gr and upmost 95% in preterm infants with gestational ages more than 32 weeks, which was the treatment goal. The aim of treating RDS is to decrease the required oxygen density after extubation which was reported in both dexamethasone and NAC groups in the present study. All the infants in both groups had intercostal retractions and about half of them in NAC group showed a significant decrease in retraction as the drug was administered; however, retraction was resolved in only 1 infant in dexamethasone group after the first day of intervention.

In our study, 60% of infants had gestational ages of less than 34 weeks, which confirms the previous fact that incidence of RDS is inversely related to gestational age (10, 11). Nearly all infants in both groups were conceived by cesarean section which has been mentioned as a risk for incidence of RDS (12). In the present study, more than 95% of infants in dexamethasone and about 64% of infants in NAC group were less than 2000 gr, which confirms the higher rate of RDS in low birth weight infants (1).

Milk intolerance was the most prevalent adverse effect of treatment in both dexamethasone and NAC group. There was no significant difference between the 2 groups for incidence of adverse effects. In a review article by Halliday et al., assessing the effectiveness of early treatment (less than 1 week) of RDS with dexamethasone, they have mentioned that despite beneficial results in extubation and decreased risk of respiratory disorders during 28 days, incidence of short-time complications such as hemorrhage, gastrointestinal tract perforation, hypertrophic cardiomyopathy, and hypertension was increased (13). In another clinical trial by Oktaviani, effects of administration of NAC or betamethasone were evaluated in women threatened with premature delivery, and was concluded that betamethasone was more effective than NAC for ling maturation of infants (14).

In previous studies, it has been concluded that prescription of NAC nebulizer decreases the hospitalization duration and accelerates the trend of improvement in infants with acute bronchiolitis (10). In another similar study, it was mentioned that intratracheal administration of NAC will increase airway resistance in premature infants; however, routine prescription of this drug was not recommended due to possible lung injuries in some infants, which was not in agreement with the present study (15). This may be due to lower duration of treatment with NAC in the present study. Prescription of inhaler NAC in children with cystic fibrosis and adults with chronic respiratory disease was associated with decreased pulmonary function (16).

Considering the fact that the prescribed doses of dexamethasone and NAC in the present study were in the lowest range of commonly used doses and taking into account the short treatment duration of infants (3 - 5 days) after extubation, incidence rate of adverse effects were unremarkable and it seems that RDS was appropriately managed in patients.

In the present study, no superiority was observed for intravenous dexamethasone or NAC nebulizer with intravenous dexamethasone in treatment of infantile RDS; however, adding NAC was more effective in treatment parameters such as respiratory rate, oxygen dependency, and mean arterial oxygen saturation due to more accurate delivery of the drug to respiratory system. Also, it was more effective in qualitative parameters of treatment such as intercostal retraction and a need for reintubation. Mortality rate and oxygen dependency were significantly decreased in both groups.

In conclusion, we found no significant difference between intravenous dexamethasone alone and intravenous dexamethasone with N-Acetyl cysteine nebulizer in treating infantile respiratory distress syndrome. However, a significant response to treatment was observed in both groups. According to the acceptable signs of response to treatment and considering that no remarkable adverse effects were reported, short-time administration of these drugs is recommended.

We suggest further studies with larger sample volume and more follow- up durations for better addressing the efficacy and possible long-term adverse effects of these medications. Moreover, it is recommended to prescribe NAC in a wider range of infantile respiratory diseases to evaluate its possible positive effects.

Copyright © 2017, Thrita. This is an open-access article distributed under the terms of the Creative Commons Attribution-NonCommercial 4.0 International License (http://creativecommons.org/licenses/by-nc/4.0/) which permits copy and redistribute the material just in noncommercial usages, provided the original work is properly cited.
download pdf 121.36 KB Get Permission (article level) Import into EndNote Import into BibTex
Number of Comments: 0