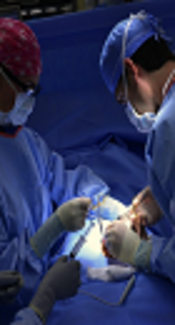 The aim of this study was to assess the effect of bariatric surgery on lipid profile of surgical candidates during the three months of post-operative care.

This prospective study was performed among 36 obese candidates of bariatric surgery at Mostafa Khomeini Hospital in Tehran, Iran from April to September of 2012. Body mass index (BMI), serum cholesterol, triglyceride, HDL and LDL levels were measured before and three months following the surgical intervention.

Our findings showed that bariatric surgery improves weight loss and can help with managing or treating co-morbid illnesses through reducing triglyceride level and increasing HDL level, both of which improve patients’ long-term cardiac, hepatic and endocrine health status.

The terms “Overweight” and “Obesity” refer to abnormal, excessive fat accumulation in an individual’s body, which lead to overall health impairment (1, 2). Body mass index (BMI) is a parameter commonly calculated in order to identify an individual’s weight status (3-5). According to the World Health Organization (WHO), a BMI greater than or equal to 25 kg/m2 indicates a status of overweight and a BMI greater than or equal to 30 kg/m2 indicates obesity (3). Genetics, heredity, environmental and psychological factors, lack of adequate physical activity and hormonal imbalances all play a part in the pathophysiology of overweight and obesity, but the most influential factor is the inequality between total caloric intake and expenditure (1, 5).

The prevalence of obesity is increasing; WHO reported that in 2014, 1.9 billion people over the age of 18 were suffering from overweight, 600 million of whom were obese and morbidly obese individuals. Also, 41 million children under the age of 5 are suffering from obesity (3). It is worth mentioning that obesity is the third preventable cause of death, following tobacco usage (6).

Studies showed that a weight loss equal to 1 kg results in a drop in serum total cholesterol by 0.05 mmol/L and LDL cholesterol by 0.02 mmol/L and an increase in HDL cholesterol by 0.009 mmol/L (8). The most widely accepted treatment plans for treating obesity and overweight include a single approach or a combination of the following: Diet therapy, physical activity (aerobic primarily), behavioral therapy (e.g., treating underlying psychological enablers of eating disorders), pharmacotherapy and at last resort, surgical intervention (9). Indications for bariatric surgery include morbid obesity (a BMI higher than 40 kg/m2) and severe obesity (BMI = 35 - 40 kg/m2) in a patient with co-morbid conditions such as diabetes or hypertension (10).

This prospective study was performed at Mostafa Khomeini General Hospital affiliated to Shahed Medical University in Tehran, Iran from April to September of 2012.

The study was carried out among patients referred to the surgical clinic of Mostafa Khomeini General Hospital seeking treatment for their overweight or obesity (either with or without comorbidities) from April to September 2012. Thirty-six patients previously diagnosed with either morbid or severe obesity were chosen based on simple random sampling technique out of all surgical candidates.

The inclusion criteria comprised having undergone pre-surgical workup, being aged 20 - 62 years, not being pregnant (for female participants), not having been previously diagnosed with hypercholesterolemia and/or hypertriglyceridemia, and not being under treatment for high cholesterol or triglyceride levels prior to being chosen as a surgical candidates. Each patient underwent evaluations including routine blood tests, upper-endoscopy (evaluating the presence of gastroesophageal reflux disease, hiatal hernia, gastritis, and H. pylori infection status), ultrasonographic assessment of the whole abdomen with particular focus on the liver and the gallbladder (mainly for the presence or absence of cholelithiasis).

All the patients underwent either sleeve gastrectomy (SG) or Roux-en-Y gastric bypass surgery. The method of surgery was chosen by the team of bariatric surgeons (independent from our study) for each patient based on thorough pre-surgical consultation, interviews and clinical assessments.

The exclusion criteria included age below 20 or above 62 years, unwillingness to participate, previous history of another form of bariatric surgery, lack of compliance with follow up visits three months after undergoing the surgery, refusal to adhere to post-surgical instructions, endocrine comorbidities other than hypertriglyceridemia and/or hypercholesterolemia (e.g., hyper and hypothyroidism, Cushing’s syndrome and hyperprolactinemia) and underlying hepatic diseases marked by elevated liver transaminase in blood test or hepatomegaly defined in abdominal ultrasonography report.

Institutional approval of ethics committee was obtained and all the patients received detailed information regarding the research and counseling prior to the surgery. Signed consent forms were also obtained from all the participants before their enrolment in the study.

The interview was performed and the questionnaire was compiled by a medical student after having received appropriate training. Demographic information such as age and sex were recorded. Anthropometric specifications including weight (within 100-gram accuracy) and height (within 0.5-centimeter accuracy) were evaluated by minimal clothing, without shoes, using a digital scale and a standard meter, followed by the calculation of BMI as the gold standard for the diagnosis of obesity.

Serum levels of total cholesterol, triglyceride, LDL and HDL were measured directly by enzymatic methods and all the tests were performed in one laboratory (Shafagh Pathobiology Laboratory, ELISA).

Three months after surgery, interviews were conducted again and each patient’s BMI three months after the surgery was calculated. Total cholesterol, triglyceride, HDL and LDL levels of serum were assessed again.

Table 1. Clinical and Anthropometric Characteristics of the Participants Before (Pre-op) and After (Post-op) Surgical Intervention

Investigations showed no correlation between BMI changes and changes in serum levels of total cholesterol, triglyceride and HDL (P = 0.149, P = 0.103 and P = 0.107, respectively), but change in serum LDL was positively correlated with change in BMI (P = 0.037, r = 0.35). Table 2 summarizes the results of other univariate comparisons of the study variables.

aCorrelation is significant at the 0.05 level (2-tailed).

We evaluated the effect of two different bariatric surgical methods on lipid profile changes. Our findings showed significant differences in the serum levels of HDL and triglyceride before and after surgery, but no significant difference was found in the serum levels of total cholesterol and LDL before and after the surgery. Furthermore, investigations showed a positive correlation between changes in serum LDL and BMI.

In another study, hyperlipidemia improved in 80% - 100% (n = 400) of the obese patients who underwent gastric bypass surgery (25). Another study reported that 72.3% of patients previously diagnosed with hypertriglyceridemia had been normalized within 18 months after undergoing gastric banding (26).

Possible mechanisms that may influence components of lipid profile in bariatric surgery are caloric restriction, weight loss (8), endocrine changes (27) and malabsorption (23). Each bariatric surgery leads to some extent of weight loss (28), and it seems that patients undergoing gastric bypass surgery experience more weight reduction (17). The correlation between weight loss and lipid level changes is a matter of debate, with some studies showing a positive correlation (29, 30) and some demonstrating no correlation (31-33). Our study demonstrated a positive correlation between change in serum LDL and change in BMI. Another possible mechanism is endocrine changes. It has been documented (34) that there is an increase in serum level of adiponectin in patients having undergone gastric bypass surgery. In this study, however, adiponectin level was not evaluated.

This study had some limitations that should be recounted here. First, the two types of surgery (sleeve gastrectomy and gastric bypass) were not randomly assigned. Second, low percentage of male patients may have influenced our results. Third, some confounding factors affecting serum lipid profile such as physical activity, dietary habits, alcohol consumption, or smoking status were not considered in this study due to difficulties regarding obtaining credible data (e.g., patients’ lack of cooperation regarding self-reports of physical activity or tobacco and alcohol consumption). Nevertheless, it should be noted that this surgery is especially noticeable when other treatment modalities with different mechanisms have already failed to yield proper weight management, especially in patients diagnosed with grade 2 obesity (BMI score of +35 kg/m2) whose weight problem withholds them from being properly able to exercise in order to lose weight (20-22). Finally, three-month follow-up period was rather short.

In conclusion, our findings showed a significant improvement in the serum levels of HDL and triglyceride before and after the surgical intervention. Furthermore, investigations demonstrated a positive correlation between changes in serum LDL and changes in BMI. In addition to the weight loss achieved by bariatric surgery, the associated risk factors such as dyslipidaemia are also expected to improve. It appears that triglyceride and HDL normalize faster.

We would like to thank Dr. Peyman Arian and Dr. Ali Ghanem for their assistance in conducting this study.

Copyright © 2019, Author(s). This is an open-access article distributed under the terms of the Creative Commons Attribution-NonCommercial 4.0 International License (http://creativecommons.org/licenses/by-nc/4.0/) which permits copy and redistribute the material just in noncommercial usages, provided the original work is properly cited.
download pdf 135.41 KB Abstract XML Get Permission (article level) Import into EndNote Import into BibTex
Number of Comments: 0