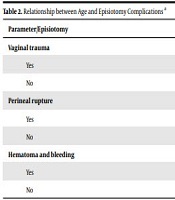 Episiotomy and Its Complications

This study aimed to evaluate the frequency of episiotomy and its early complications in natural vaginal delivery in the maternity ward of Ali Ibn Abitaleb (AS) Hospital in Zahedan from 2014 - 2016.

In this cross-sectional study, which was conducted in 2017, the archives of women who gave birth between 2014 - 2016 were reviewed. Data were collected using information forms and analyzed by SPSS software.

One of the most common operations in midwifery is episiotomy. This cut is done in the second stage of labor to widen the pelvic floor outlet and facilitate delivery (1). Although routine use of episiotomy has been reduced in advanced countries, the use of this method is still ongoing in women in Asian countries owing to having short perineum and hard tissue for rupture (2).

This method is used in approximately 15 to 95% of childbirth. According to various studies, at least 80% of mothers who have the first birth in the United States undergo this painful surgical incision (3). In the United States, the end of the 1970s was approximately the episiotomy cut in all women who were firstborn, while in 1997 it reached 39% (4); however, it was still higher than hardship (30% and less) (5). However, these figures were in developing countries, including Asian countries such as India above 90% (6), even in some regions of North America and Asia, has been reported to be 100% (7). It is a regular cut that is easier to repair, while often without it, irregular tears occur (8).

Various researchers have proposed different benefits for episiotomy, including preventing infant intracranial injuries, improving Apgar score, stopping irregular and severe perineal tears, easier restoration of episiotomy incision than tear, preventing loosening of pelvic floor muscles and the occurrence of cystocele and rectocele, some of which are still under discussion (4).

By performing an episiotomy, a surgical incision causes perineal pain after delivery, and this pain is one of the annoying cases in new-borns that constrains movement and forms of urination and bowel movements, as well as the care of the baby and effective lactation. On the other hand, the pain of episiotomy is one of the reasons why mothers are afraid of vaginal delivery and tend to perform a cesarean section. Studies have also shown that postpartum sexual intercourse also somewhat disturbed (8).

Perineal muscles play an important role in normal activities, and the cutting of this area, in addition to pain with fatigue, insomnia, difficulty sitting and hugging a child, decreasing sexual function, and impaired emotional relationships between mother and baby (9-12). The need for postpartum maternal hospitalization is increased in mothers with episiotomy (13).

Therefore, the aim of this study was to evaluate the frequency of episiotomy and its early complications in normal delivery in the maternity hospital of Ali ibn Abi Talib (AS) Hospital in Zahedan from April 2014 to March 2016.

This cross-sectional descriptive study was performed on all normal births from the beginning of the year 2014 to the end of the year 2016 in the maternity ward of Ali ibn Abi Talib Hospital in Zahedan. After approval by the ethics committee, cases related to deliveries during the study period were extracted from the hospital archives. For scoring of pain, we used Unidimensional Numeric Rating Scales (NRS) by which patients rated their pain on a scale of 0 to 10. Zero means “no pain”, and 10 means “the worst possible pain”. Data were then extracted and recorded based on a checklist (including the variables of this study). At the end of the study, the data were entered into SPSS software version 19 and then analyzed by descriptive statistics (mean, standard deviation, number, and frequency) as well as analytical tests including chi-square and t-test, and a significance level of 0.05.

Table 1. Comparison of the Frequency of Perineal Rupture in Deliveries with and without Episiotomy

One of the most common surgeries in midwifery is episiotomy. This cut is done in the second stage of labor in order to widen the pelvic floor openings and facilitate delivery. The aim of this study was to determine the distribution of episiotomy frequency and its prevalent complications in normal delivery in the maternity hospital of Ali ibn Abi Talib (AS) Hospital in Zahedan from April 2014 to March 2016.

We are now comparing the results of this study with other studies in this field. In a research conducted by Khani et al. In Sari in 2009, 915 women admitted to the maternity hospital of Imam Khomeini Hospital in Sari during 2009 were selected by census method. According to the results of this study, 88.7% of normal births It was associated with episiotomy. Also, this method was performed with maternal age (P = 0.023), number of deliveries (P = 0.01), first minute Apgar (P = 0.003), fifth-minute Apgar (P = 0.001) and birth weight (P = 0.000) has statistically significant association (14).

Also, in a similar study conducted in Imam Khomeini Hospital in Sari in 2001, 730 childbirths were evaluated. Based on the results of this study, 89.5% of natural deliveries were associated with episiotomy, and the frequency of episiotomy was 71.1% in the preferred episiotomy group and 89.5% in the common group (15). Another study by Khajavi Shojaei et al. In Tehran in 2009 conducted on 510 patients were enrolled. The episiotomy prevalence was 97.3, 32.3% mediastinal episiotomy, and 67.7% mediolateral type. The prevalence of pain in these patients in times of 1, 10, 40, and 90 days after delivery were 96.4, 62.9, 24.9, and 12%, respectively (16). In Another study by Rassouli and colleagues in Shahrood 2014 - 2015, 978 vaginal births were evaluated. According to the results of this study, the frequency of episiotomy was 41.5% (406 cases). In their study, the maternal age in women with episiotomy was significantly lower than those without episiotomy. The mean number of parity and gravid and also the mean Apgar scores for the first- and fifth-minute infants in women with episiotomy were significantly lower than those without episiotomy (17).

Another study, conducted by Sule and colleagues in Nigeria in 2003, investigate the complications of episiotomy in one of the educational hospitals of Zaraya and studied 247 childbirths. They reported that the prevalence of episiotomy was 36%. Episiotomy had a significant correlation with the first gravidity; 78% of those with episiotomy were primigravid, and 88% of all primigravidae went under episiotomy (P < 0.0001). In their study, there was a significant relationship between the status of the embryo and the position of the occipitopusterior with episiotomy, but there was no significant relationship between episiotomy and the mother's age, the duration of the first and second stages of labor, and also between the gestational age, the weight of the baby, the number of embryos. The mean time of perineal pain and also the average amount of consumed painkillers to reduce perineal pain in the episiotomy group was significantly higher (18).

In another study, which Shalini Singh and his colleagues conducted in 2016 in India, they examined the pattern of episiotomy and its early complications among vaginal births in 18 hospitals in India and studied 120,243 vaginal births and reported an episiotomy frequency of 63%, the likelihood of episiotomy in Nulipar women 8.8 times more than multipara women. Vaginal hematoma, vaginal laceration in those undergoing episiotomy was significantly less than those who did not get episiotomy (19).

Anders Martin Mellizo-Gaviria and colleagues in Colombia in 2017 evaluated the frequency of episiotomy and its complications in the maternal ward. They examined 448 vaginal births and reported an episiotomy frequency of 30%, and the age and body mass index of mothers who had episiotomy were significantly lower than mothers without episiotomy, and after multivariate analysis, there was a significant relationship between parity and episiotomy (21).

In general, the results of this study showed that the frequency of episiotomy was 54.5%, and there was a significant relationship between maternal age and parity with episiotomy. Performing episiotomy increases hematoma and hemorrhage but does not affect the amount of anterior vaginal trauma.

Copyright © 2021, Zahedan Journal of Research in Medical Sciences. This is an open-access article distributed under the terms of the Creative Commons Attribution-NonCommercial 4.0 International License (http://creativecommons.org/licenses/by-nc/4.0/) which permits copy and redistribute the material just in noncommercial usages, provided the original work is properly cited.
download pdf 105.94 KB Get Permission (article level) Import into EndNote Import into BibTex
Number of Comments: 0