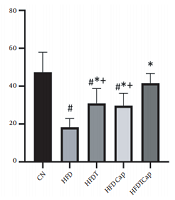 Oxidative stress harms cells and impairs the balance between oxidative and antioxidative factors. Exercise and capsaicin have anti-inflammatory and antioxidant effects, as well as some benefits on the cardiovascular system.

The aim of the present study was to examine the effect of aerobic training with capsaicin on heart changes oxidative stress in rats fed a high-fat diet (HFD).

Obesity is one of the important challenges in 21st century. In 2016, approximately 650 million individuals were obese in the world (1). Obesity is mostly associated with an increase in inflammation and structural and functional changes, which is similar in humans and animals (2). The studies showed that high-fat diet could increase oxidative stress in heart (3). In addition, numerous data show that not only oxidative stress and inflammatory signaling are not associated together, but also they can inhibit the response of insulin to glucose, establishment of atherosclerosis, cardiovascular diseases, and subsequent outcomes (4). Previous studies showed that an increase in these indices plays pivotal roles in malfunction of heart (5). Although studies showed that obesity plays important roles in establishing oxidative stress, inflammation, and diabetes in addition to cardiovascular diseases, association between obesity and cardiac function is not fully understood. In this regard, it is reported that reinforcement of antioxidant system and/or treatment with antioxidants in patients with cardiovascular disorders reduces the severity of the cardiac lesion considerably (6). In recent decades, exercise activities plus dietary regimen has been recommended as an appropriate approach to manage obesity. Regarding the role of exercise activity in antioxidant defense system, it should be said that exercise activity increases volume of oxygen consumption, changes in intracellular calcium homeostasis, vasomotor changes, and perfusionated ischemia, and finally leads to the temporary increase in reactive oxygen species (ROS). This mentioned temporary increase in producing ROS leads to establish compatibility and improvement of antioxidant system capacity in long-term (7). In this regard, Effting et al. (2019) showed that eight weeks of training increase SOD and glutathione of the cardiac tissue in obese mice (8). Dehghan Manshadi et al. (2017) also showed that resistance training increases the expression of SOD of the cardiac tissue; however, it has no significant effect on GPx (9). In addition to aerobic exercise activity, the studies showed that capsaicin is also an anti-obesity substance and has a role in the treatment of numerous diseases (10, 11). Several clinical studies showed that capsaicin suppresses ROS (10, 11).

Numerous evidences indicate that lifestyle, especially physical activity and diet, play pivotal roles in incidence of obesity and its negative complications such as cancer and cardiovascular disease. However, the main underlying mechanism of obesity and pathological problems, caused by it, is not well identified, and decreasing energy intake and increasing energy expenditure using exercise activities are among the common non-pharmaceutical methods to inhibit obesity. Therefore, a combination of physical activity and herbal medicine can be an appropriate strategy to prevent and treat this disease. In this study, the effect of aerobic physical activity plus capsaicin on indices of oxidative stress of the heart tissue was assessed in Wistar rats fed with high-fat diet.

In this experimental study, 40 Wistar male rats aged 5-weeks with the weight 147.68 ± 9.41 were prepared from the Pasteur institute and were transferred to animal laboratory. The sample size was determined based on previous studies at the level of significance of 5% (type I error) and statistical power of 95% (type II error) and also using Medcalc 18.2.1 software, eight mice in each group. The studied animals were kept in groups of four in polycarbonate cages. The temperature of the environment was 22 ± 1.4°C, and photoperiodic cycle of 12:12 hours, and humidity of 55.6 ± 4%. All animals had free access to mouse-specific water and food. After adaptation of rats with the new environmental conditions (after one week), the rats were allocated to two groups of normal diet (ND, n = 8), and high-fat diet (HFD, n = 32). The rats of the ND group were fed for eight weeks by the standard food (23% protein, 65% carbohydrate, and 12% fat). The rats of the HFD group consumed high-fat diet in this period. The high-fat food consists of 17% protein, 43% carbohydrate, and 40% fat. Standard and high-fat foods were prepared in coordination with the Iran Pasteur Institute. After eight weeks, all mice were allocated to five groups: normal diet (ND), high-fat diet (HFD), high-fat diet-training (HFDT), high-fat diet-capsaicin (HFDCap), and high-fat diet-training-capsaicin (HFDTCap). In the following, the high-fat diet was changed into the standard diet. Additionally, the ethical considerations of animal experiments complied with the Ethics Committee of Marvdasht Islamic Azad University, and the study was approved (IR.IAU.M.REC.1398.015).

The aerobic exercise program consists of running on treadmill with a slope of zero for five days per week within eight weeks. In the first week, the rats performed an ascending aerobic training program on treadmill with intensity of 15 m/min for 30 min. Thereafter, intensity of activity was reached from 15 m/min to 25 m/min, and the time of activity was enhanced to 60 minutes (12) (Table 1).

3.2. Preparation and Use of Capsaicin

Capsaicin was purchased from Sigma-Aldrich Co., LLC. (95% purity). Capsaicin solution was prepared in 0.9% saline (4mg/mL). This combination was used orally through gavage once per day with a dose of 4 mg/kg/d for eight weeks in the morning after initiation of light period (13). The same amount of saline was also gavaged to the other groups.

3.3. Sampling Method from the Heart Tissue and Measurement of the Variables

All the samples were anesthetized in similar conditions and at baseline condition (48 hours after the last training session and 12 to 14 hours of fasting) by intraperitoneal injection of a combination of ketamine (60 mg/kg) and Xylazine (5 mg/kg). Heart tissue was homogenized immediately after isolation, weighing, and washing. Tissue concentration of GPX, CAT, SOD, and malondialdehyde (MDA) was measured through ELISA method using the kits specific for Wistar rats (Zellbio GmbH CO., Germany). Changes range and sensitivity of measurement for GPX were 20 - 500 U/mL and 5 U/mL, for CAT was 1 - 100 U/mL and 0.5 U/mL, for SOD was 5 - 100 U/mL and 1 U/mL, and for MDA was 20 - 100 U/mL and 5 U/mL, respectively.

In order to assess normality of distribution of data, Shapiro-Wilk test and to analyze data, one-way ANOVA and Tukey post hoc test were used (P ≤ 0.05).

In Table 2, the mean and results of between-group test related to the study variables are presented in various groups.

a Difference with ND.

b Difference with HFD group. 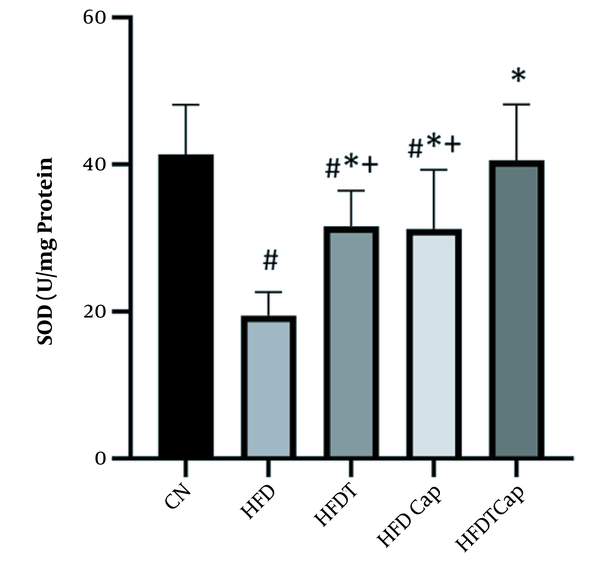 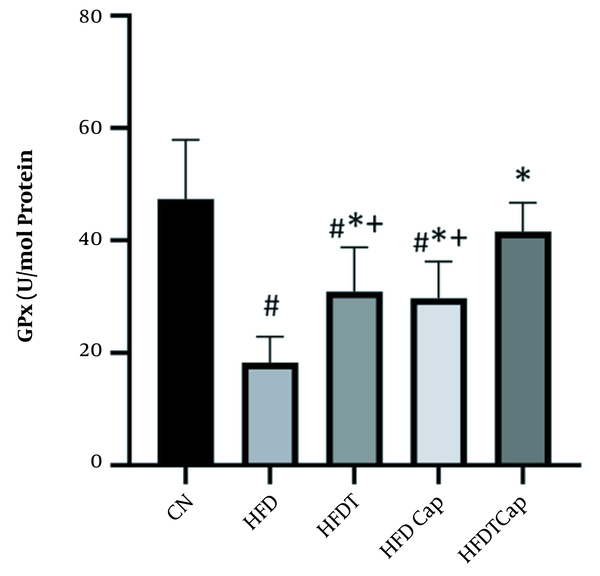 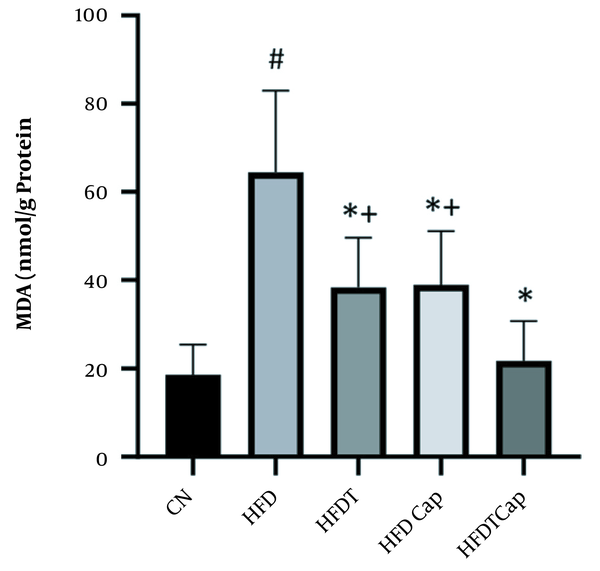 The results of the current study showed a significant decline in antioxidant enzymes such as SOD, GPx, and CAT in heart tissue of mice fed HFD compared to other groups. Besides, lipid peroxidation index (MDA) was increased in the tissue. In this regard, Skrzep et al. (2020) showed that obesity caused by HFD increase MDA in myocardium (14). In addition, Gujjala et al. (2019) stated that HFD increased lipid peroxidation and protein oxidation, and decreased activity of oxidative enzymes (15). Lipid peroxidation is one of the damages caused by obesity. Obesity increases metabolic needs and changes the substrate type used by heart from fatty acid to glucose (16). Subsequently, it impairs the use of glucose and fatty acid oxidation, and also leads to impaired function of mitochondria and production of ROS species (17). Heart is sensitive to oxidative stress and contains fewer scavengers for ROS, including SOD, CAT, and GPx (18).

In the current study, aerobic physical activity increases heart antioxidant capacity by increasing SOD, GPx, and CAT enzymes and decreasing MDA. Mahdian et al. (2018) also confirmed that continuous and interval aerobic training increased CAT and SOD of the heart tissue in HFD rats (19). In addition, Acikel Elmas et al. (2019) showed that swimming training in HFD rats increased SOD and glutathione and decreased MDA, and prevented obesity-induced heart damage through modifying oxidant/antioxidant balance (20). A significant increase in SOD, GPx, and CAT following aerobic training in the current study indicates activation of antioxidant system against oxidative stress induced by HFD. The research showed that oxidative stress and glutathione decrease caused by resistance training led to express PGC1-α protein. PGC1-α probably leads to transcription of combining-protein factor of CREB. Then, this protein increases scavenger enzymes of free radicals such as GPx and MnSOD. The underlying molecular mechanism in activating these antioxidants may potentially be PGC1-α that is combined with ERR-α and activates SIRT3 in mitochondria matrix. SIRT3 is a regulator of producing ROS through binding and deacetylating of mitochondria complex I and II (21). Previous studies showed that SIRT3 can deacetylate mitochondrial enzyme of MnSOD; thereby increasing the antioxidant activity. Therefore, it seems that PGC1-α is a strong suppressor of producing ROS through the expression of antioxidants (21). In contrast, over-expression of PGC1-α increases antioxidant defense through increase in MnSOD expression and an increase in activity of catalase enzyme (22).

Another result of the current study was a decline in MDA and increase in SOD, GPx, and CAT as a result of capsaicin consumption in HFD rats. Zhu et al. (2017) also showed that capsaicin has protective role in increasing SOD and decreasing MDA in cardiomyocytes (23). Tanrıkulu-Küçük et al. (2019) stated that HFD decreases total antioxidants and increases oxidative stress of the liver tissue while consuming capsaicin increases total antioxidant and decreases ROS (24). It seems that capsaicin affects free radical scavenger directly (24). Many of the active biological components of plants can activate the Nrf2 pathway, and improve the expression of Nrf2 and decrease expression of Keap1 (25). Activation of Nrf2 and its interaction with antioxidant elements modify transcription of various antioxidant enzymes (such as CAT, SOD, GSH-Px) and finally attenuate oxidative stress (26). Besides, weight loss caused by consumption of capsaicin also can improve the oxidation condition. The results of the current study showed that HFD increases weight of mice compared to ND group, despite that capsaicin use inverses this progress. Capsaicin reduces body fat and weight by increasing energy expenditure in rodents and humans (27). Effect of capsaicin on energy and metabolism of fats is through increasing of activity of sympathetic nervous system and increasing of noradrenaline (27).

Regarding the simultaneous effect of aerobic exercise with capsaicin compared to other groups, the results of the current study showed that in HFD rats, levels of SOD, GPX, and CAT were increased, and the level of MDA was decreased. The simultaneous effect of aerobic training and consumption of capsaicin on oxidative stress indices in heart tissue has not been assessed. Despite this, Ghyasi et al. (2019) showed that voluntary exercise plus consumption of garlic in diabetic Wistar rats improves structure and function of antioxidants in heart tissue (28). It seems that exercise activity and capsaicin reinforce their effect on antioxidant system so that the effect of combination of both of them compared to each of them was greater on oxidant status of heart in mice fed HFD. These results showed that training with capsaicin might have a better effect to prevent and decrease complications caused by HFD on oxidation pressure compared to performing training and/or consuming capsaicin alone.

The results of the current study showed that aerobic training and consuming capsaicin is an appropriate method to preserve heart through changing in activities of MDA, SOD, GPX, and CAT. However, simultaneous effect of training and consuming capsaicin was greater. It seems that combination of these two compounds has a synergistic effect and is a useful tool to improve and control stress-induced heart damage in obese specimens.

Copyright © 2021, Zahedan Journal of Research in Medical Sciences. This is an open-access article distributed under the terms of the Creative Commons Attribution-NonCommercial 4.0 International License (http://creativecommons.org/licenses/by-nc/4.0/) which permits copy and redistribute the material just in noncommercial usages, provided the original work is properly cited.
download pdf 504.01 KB Get Permission (article level) Import into EndNote Import into BibTex
Number of Comments: 0