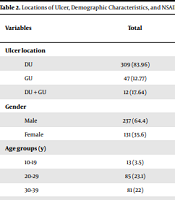 The idiopathic peptic ulcers (IPU) or non-Helicobacter pylori, non-steroidal anti-inflammatory drug non-NSAIDs associated peptic ulcers are a serious therapeutic challenge. The prevalence of IPU is increasing in some parts of the world.

This study aimed to determine the prevalence of IPU in southeastern Iran.

In this cross-sectional study, a total of 367 patients with active peptic ulcer were diagnosed by endoscopy between Jan 2018 and Feb 2019. The patients were assessed for history of medication use (including NSAIDs) in the past month, smoking, alcohol, as well as a complete history of health problems related to underlying disease such as cardiopulmonary, hepatic, renal problems, and chronic pancreatitis. Biopsy samples from antrum were performed for rapid urease test (RUT), and if RUT was negative, then biopsies were sent for histopathology. If both RUT and pathologic findings were negative for H. pylori, in patients who had treatment for H. pylori eradication, anti-H. pylori IgG antibody of blood samples was assessed. Patients were considered infected with H. pylori if any of the diagnostic tests had a positive result.

Our study showed that both H. pylori infection and NSAIDs use remain the main cause of peptic ulcers, and the prevalence of IPU is relatively high in Zahedan.

Literature reported H. pylori infection is more common in developing countries than in developed countries and is about 100% in some areas (5). However, more recent studies showed H. pylori infection has decreased in some Asian regions (6). In this regard, multiple factors such as successful H. pylori eradication therapy and increased healthy lifestyle may be involved (7). Peptic ulcers that do not relate to H. pylori infection or taking NSAIDs are considered idiopathic peptic ulcers (IPU). The IPU, in comparison with other peptic ulcers with known causes, has a worse prognosis, more relapse rate, more complications such as bleeding, and difficult treatment/recovery (8). Some reports showed an increase in the prevalence of IPU, particularly in developed regions of the world (9).

Although numerous epidemiological studies have shown alternation in the etiological factor for peptic ulcers, few research has been conducted on this issue in Iran. Hence, it seems necessary to define the strategies and future management of peptic ulcer diseases in our region.

This study aimed to determine the prevalence of IPU in southeastern Iran.

This cross-sectional study was conducted at a 1000-bed, university-affiliated hospital in Zahedan, Iran. The research ethics committee evaluated and approved the study. Eligible patients were selected by the available sampling method. The subjects were patients with active peptic ulcer endoscopically diagnosed between Jan 2018 and Feb 2019. An ulcer was defined as an active mucosal lesion with observable submucosal depth and longest diameter of ≥ 5 mm. Written informed consent was obtained from all participants, and the research objectives were explained prior to participation. The participants with an age of < 18 years were included if their parents signed an informed consent. Patients with any malignancy, malignant gastric ulcers, and history of peptic ulcer surgery were excluded.

The patients’ basic demographics, history of medication use (including NSAIDs) in the past month, smoking, alcohol, as well as a complete history of health problems related to underlying diseases such as cardiopulmonary, hepatic, renal problems, and chronic pancreatitis were taken from the patients upon visiting and were recorded in the baseline forms.

During the upper gastrointestinal endoscopy, biopsies were performed at the antrum of gastric mucosa, and rapid urease test (RUT, sensitivity 85 - 95%, specificity 95 - 100%) was done for the tissue samples, and if H. pylori-negative, other samples were sent to the laboratory of pathology to observe H. pylori on a biopsy smear after hematoxylin-eosin staining (sensitivity 80 - 90%, specificity > 95%). In patients who did not have a treatment for H. pylori eradication, anti-H. pylori IgG antibody (sensitivity > 80%, specificity > 90%) of blood samples was requested.

Patients were considered infected with H. pylori if any of the diagnostic tests had a positive result. SPSS software version 17 was used for data process and analysis. Descriptive statistics (e.g., frequency and percentage) were calculated. Also, comparisons between H. pylori-positive and H. pylori-negative patients and categorical variables were made by chi-square test. P-value < 0.05 was considered as statistically significant.

Table 1 presents more detailed information about the etiologies of peptic ulcers in our sample. Locations of ulcers and demographic characteristics of the patients are shown in Table 2.

Table 2. Locations of Ulcer, Demographic Characteristics, and NSAIDs Use in the Patients with H. pylori-Positive and H. pylori-Negative Peptic Ulcer (n = 368).

This study adds to the literature on the prevalence of H. pylori-positive and H. pylori-negative peptic ulcers and provides an estimation of the prevalence of IPU in southeastern Iran. The etiological role of H. pylori and NSAIDs in endoscopically diagnosed gastric and duodenal ulcers showed the involvement of these two main causes in 91.3% of peptic ulcer cases in this study. We also found no significant association between H. pylori infection and the patients’ demographics (age and gender), smoking, and use of NSAIDs in our patients.

Our findings are in accordance with the past to present literature, which showed a remarkably higher prevalence of H. pylori-related peptic ulcers (10, 11); also, duodenal ulcer (DU) was more common than gastric ulcer (GU) (12). Considering the demographic characteristics of the patients with peptic ulcer, they were as young as samples in other similar studies (13), and H. pylori-related peptic ulcers showed a male predominance (14). A systematic review and meta-analysis of 80 studies from Iran in 2018 found that the prevalence of peptic ulcers in Iran was 34%, which was higher than the global rate (6 to 15%), and the prevalence of H. pylori-positive ulcers was 62% in patients with peptic ulcer (15). Also, in contrast with our results, the mentioned review showed that one of the environmental causes of peptic ulcers is smoking (15). This inconsistency might be attributed to the fact that most of the included samples in our study were non-smoker individuals. As several studies reported (16-18), in the present study, the current smokers had more positivity to H. pylori than nonsmoker patients with peptic ulcer. The same reason may be applied to the inconsistency of NSAIDs use, and most of our samples were not chronic NSAIDs user.

Our data indicated that the incidence of IPU or non-NSAID, non-H. pylori associated peptic ulcers was 8.69%, which is close to another study (13.11%) from Iran (19). Seyed Mirzaei et al. (2015) found that the prevalence of IPU in Kerman (southern Iran) was 1.8%, which was lower than the rates found in our province. Regarding their method, polymerase chain reaction (PCR) test was used on tissue samples that increased H. pylori detection rate (20). Numerous studies have been published since 1996 with different results showing the prevalence of IUP range from 0.8 to 40%, which seems to be due to the health promotion of the population and the diagnostic accuracy of the used tests (21, 22). A review study reported that IPU comprised 10 - 30% of all peptic ulcers in Asia (21). Overall, a review of the literature indicated an increase in the prevalence of IUP. Most of the available evidence suggested that IPUs are more likely resistant to acid suppression therapy and are related to a high risk of recurrence and bleeding and more mortality in comparison with H. pylori-positive peptic ulcer (23).

However, in most studies, the techniques of detecting H. pylori were RUT, respiratory urea test, fecal antigen test, histology, serology, or a combination of mentioned techniques with about 95% diagnostic sensitivity (2). It should also be noted that some patients had false negative tests for H. pylori due to the low bacterial load in the tissue, recent usage of antibiotics or proton pump inhibitors medications (24, 25).

Various etiological risk factors involved in upper GI ulceration are not yet entirely understood. However, several factors have been found to be important in the pathogenesis of peptic ulcer, including the medications such as spironolactone (26) and selective serotonin reuptake inhibitors (SSRIs) (27), as well as underlying diseases such as cirrhosis COPD (28, 29), renal stones, chronic pancreatitis, coronary artery disease (CAD), and polycythemia vera (30). Given the high prevalence of asymptomatic CAD in our society, a percentage of our patients may be prone to IPU due to CAD (31).

This study had some limitations. First, due to a possible defect in tissue sampling, many false negative results occurred in the URT as well as histological investigation, and if tissue culture had been performed, the chances of positive results for H. pylori were much higher. Second, despite our efforts to obtain accurate medical history, patients may not have reported NSAIDs usage, and this may have contributed to the high rate of IPU in our study. On the other hand, unlike previous similar studies, the large sample size in this research may be considered as one of the strengths of the current study. Our results are crucial for clinical practice to diagnose and monitor the trends related to peptic ulcer diseases over time in our population.

Our study showed that both H. pylori infection and NSAIDs use remain the main cause of peptic ulcers, and the prevalence of IPU is relatively high in Zahedan.

Copyright © 2021, Zahedan Journal of Research in Medical Sciences. This is an open-access article distributed under the terms of the Creative Commons Attribution-NonCommercial 4.0 International License (http://creativecommons.org/licenses/by-nc/4.0/) which permits copy and redistribute the material just in noncommercial usages, provided the original work is properly cited.
download pdf 185.12 KB Get Permission (article level) Import into EndNote Import into BibTex
Number of Comments: 0