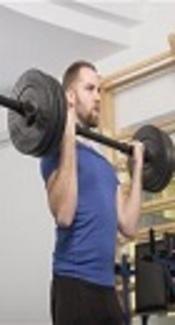 The Impact of Aerobic and Anaerobic Exercises on the Level of Depression, Anxiety, Stress and Happiness of Non-Athlete Male

Exercises bring about health. Therefore, knowing what kind of exercise is more effective in individuals’ spirituals health indices is important. Thus, the present study aims at comparing the impact of aerobic and anaerobic exercises on the level of depression, anxiety, stress, and happiness of nonathletic male students.

In this clinical trial study, sample included the nonathletic male students of Zahedan Azad University in 2014. 90 students were selected through convenience sampling and they were divided randomly into two experimental groups (aerobic and anaerobic) and one control group. The aerobic group must do aerobic exercises and the anaerobic group must do anaerobic exercises for a period of 10 weeks (3 sessions a week, each lasted for 60 minutes). The data were collected using DASS-21 questionnaire for measuring the level of depression, anxiety and stress, and Oxford OHI questionnaire for measuring the amount of happiness before and after the intervention. The results were analyzed using statistical tests of MANCOVA in SPSS-13.

Both aerobic and anaerobic exercises result in reduction of stress and Anxiety. So it seems necessary to include such exercises in students’ daily schedule.

Students experience situations like being away from home and being separated from family, and facing problems related to education, which are all part of stressful events in their lives [1-3]. Stress and tension are the first factors that threaten someone’s mental health [4, 5]. However, recent studies have demonstrated that about 21 percent of Iranian students suffer from stress and anxiety [6]. These two disorders can lead to students’ physical and mental illnesses, disorder in performance and their ability to adapt themselves to different situations and finally they can result in depression [7, 8]. Stress, depression and anxiety are the most common mental disorders which have harmful negative effects on the students’ performance in society and in work environments; they are regarded as one of the major reasons of educational deterioration [9, 10].

On the other hand, one of the human mental needs which is against stress, anxiety and depression is happiness. Encouraging happiness, the effect of negative mental pressures can be reduced [11, 12]. This is of more importance for students who are constantly dealing with a scientific and research places and shape the future of the country.

Therefore, finding a solution to reduce the consequences of stress and anxiety and make this group of society happy is of great importance. On the other hand, everybody knows the role of sport in reducing mental disorders and in reinforcing positive emotions such as happiness [13, 14] (but it is very important to know which sport can be more useful in reducing the consequences of stress and anxiety.

In this study in addition to demographic forms, depression, anxiety and stress, DASS questionnaires and Oxford Happiness questionnaire were administered to each group in order to measure the mental health indices before and after the intervention.

The depression, anxiety and stress questionnaire (DASS-21) consists of 21 questions developed by Lovibond et al. (1995). A set of three self-report scales was used for measuring negative emotional mood in depression, anxiety and stress. The above instrument is scored based on the four-point Likert scale from 1 to 4. Eventually, score 1 shows the minimum score and score 84 shows maximum level [21].The reliability and validity of the scales (DASS-21) were examined by Samani and Jokar (2007) in Iran [22].

The Oxford happiness questionnaire (OHI) was developed by Argyle et al. (1989). This questionnaire consists of 29 sections which is categorized according to 4-point Likert scale. Each section is between 0 to 3 and the minimum total score is 0 and maximum score is 87. The more the individual’s score, the higher their happiness will be interpreted. Argyle et al. (1989) reported reliability of 90% for this instrument using Cronbach Alpha coefficient [23]. The reliability and the validity of this instrument has been already confirmed by Alipoor [24].

Students in the aerobic and the anaerobic groups were required to attend a sports hall in the even and the odd weekdays, respectively. Aerobic and anaerobic exercise sessions were offered by the third researcher in thirty sessions held in ten consecutive weeks, i.e. three sessions a week. Each session consisted of three parts, namely warming up exercise (including a six-minute jogging followed by a four-minute stretching exercise), aerobic or anaerobic exercise, and cooling down exercise (including a four-minute jogging and a five-minute stretching exercise). Moreover, they were asked to do their activities of daily living and avoid any other regular exercise program during the study.

Standard aerobic exercise program: Exercise was started with 10 three-session weeks; and the first session with 50% of maximal oxygen uptake (VO2 Max) consumption for 20 minutes, and then the severity and duration of exercise were increased in each exercise session according to the overload principle. In the final ninth and tenth weeks, the time was increased by 38 minutes and the VO2 Max of 70% was consumed [25] (Table 1).

The exercise was started with 10 three-session weeks; and the first session with repeated sprints (30 m: 3 repeats, 60 m, 100 m: 1 repeat) with VO2 Max of 95%. The severity and duration of exercise were increased in each exercise session according to the overload principle. In the final ninth and tenth weeks, the participants finished the distances of 30 meters with 11 repeats, 60 m with 6 repeats, and 100 m with 2 repeats with VO2 Max of > 100 [26] (Table 1). The maximum oxygen consumption (%Vo2 Max) = 15 × (Maximum heart rate divided by the resting heart rate) Maximum heart rate of each person is equal to age of person minus the fixed number 220 your age [27].

Data analysis was done via the SPSS software (v. 13.0). The Kolmogorov-Smirnov test was conducted to test the assumption of normality while the measures of descriptive statistics (such as mean, standard deviation, and absolute and relative frequencies) were employed for data description and presentation. The Chi-square test and MANCOVA were run to compare the groups regarding students’ marital status, age, weight, body mass index, DASS scores and OHI scores. The significant level in the statistical analysis was less than 0.05.

This study was made on ninety students. During the study, three students left the study (one from the aerobic and two from the anaerobic groups). In other words, respectively 29, 28, and 30 students from the aerobic, anaerobic, and control groups completed the study. Students aged 18 - 25 years old, with a mean of 20.83 ± 1.80. No significant difference was observed among the groups respecting students’ age, weight, body mass index, and marital status (P > 0.05; Table 2).

No significant statistical difference was observed among three groups before intervention in terms of depression, anxiety, stress, and happiness variables (P > 0.05).

Multivariate analysis results in Table 3 indicate that considering four variables of depression, anxiety, stress, and happiness, difference among three groups is significant at varying levels of stress and anxiety dependent variable after intervention, and almost 11 percent of total variance or individual differences in stress and 7 percent in anxiety is related to the difference in three groups.

Table 3. the Mean of the Level of Anxiety, Depression, Stress and Happiness of the Participants Before and After the Interventiona

Research findings also showed that stress and anxiety decreased in both aerobic and anaerobic groups after intervention, but severity of this reduction was higher in anaerobic group. The results for aerobic exercise is in line with the findings of the research already conducted on the effect of aerobic exercises on mental indices. For instance, some studies examined the changes in the level of Neuadrenalin, serotonin and Dopamine with aerobic exercises and stated that although there are many differences between experimental protocols, results demonstrate evidences for positive changes in synthesis and metabolism of Monoamines during this type of exercise. There are even other evidences that show aerobic exercises can cause a positive change in the density of neural conveyer in neural system and could have anti stress effects on reducing muscular tension and hormones level [28-30]. In another study, von Haeren et al. (2016) reported that through affecting automatic neural system, aerobic exercises can reduce the level of stress and anxiety, which endanger the human health, and take a positive step toward reducing anxiety and depression [31].This may happen due to changes in cortisol level during doing aerobic exercises because various studies have reported the impact of aerobic exercise on reducing the level of cortisol and anxiety [32, 33].

Contrary to the result of previous studies, Stein and Motta (1992) reported in a study that anaerobic exercises are more effective and useful than aerobic exercises. These results are also in line with the results of the current study [18].

On the other hand, contrary to the present study, some other studies which compared various sports individually, showed that aerobic and group activities are more effective on mental well-being than anaerobic and individual exercises [36]. This may be due to the different age group of the participants, as most studies conducted on middle age and elderly people.

In Sabetghadam et al. (2014) study, the students were treated by sport protocol of 10 weeks, 2 days a week and 60 minutes a day. The results demonstrated that doing various physical activity regularly especially aerobic exercises has a significant positive effect on reducing depression symptoms and appearing the happiness symptoms which is not in line with the results of the present study [19], as the findings of the present research indicate that happiness and depression were developed in participants after intervention, but the change was not statistically significant. It might be due to impact of various factors on these two important mood variables. Factors such as biological, emotional, and cognitive processes may be influential, accurate examination of which is recommended in the future works.

The limitations of the study include limited number of sample, not performing the bio physiologic or biochemical evaluation (for accurate examination of the effect of sport metabolism) and not pursuing the effect of exercise on reducing anxiety, stress, depression and happiness enhancement in long term. It is suggested that they are obviously considered in the future studies.

Although the findings of the present study confirm the positive effects of both aerobic and anaerobic exercises on reducing anxiety and stress. Therefore, the present results emphasize that exercises can be used as an effective strategy for reducing mental pressures. However, further studies are required to clarify the main metabolism of anti anxiety effects.

This study is a part of master’s thesis on exercise physiology at Islamic Azad University of Kerman. (Grant No. 93121- 10821410922003) and registered by the Iranian clinical trial centre under No IRCT2017011526858N5. Hereby, we greatly appreciate the dear students, the research department of Kerman and Zahedan Azad University who contributed in performing this research project.

Copyright © 2018, Zahedan Journal of Research in Medical Sciences. This is an open-access article distributed under the terms of the Creative Commons Attribution-NonCommercial 4.0 International License (http://creativecommons.org/licenses/by-nc/4.0/) which permits copy and redistribute the material just in noncommercial usages, provided the original work is properly cited.
download pdf 137.84 KB Get Permission (article level) Import into EndNote Import into BibTex
Number of Comments: 0