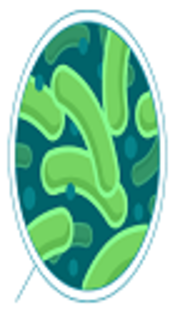 Milk forms a considerable part of the necessary materials needed for the physical and mental growth of all community members, especially children and the elderly. Since milk is a suitable culture medium for the growth of many bacteria, strict standards have been introduced for its safety. The aim of this study was to evaluate the coliform contamination of raw cow’s milk and the level of endotoxin in it.

Using random sampling, 43 samples of raw cow’s milk were collected in Isfahan, Iran. Coliforms were identified by biochemical tests. Then, the molecular method was employed for the definitive identification of the coliforms. Moreover, endotoxin levels were assessed employing the limulus amebocyte lysate (LAL) test.

Results indicated the presence of coliforms in 17 (39.45%) of the raw milk samples. Based on the molecular identification of the isolated coliforms, 10 samples were contaminated with Escherichia coli, five with Enterobacter spp., and two with Klebsiella pneumoniae. The results of the LAL test showed that 17 samples contained 0.250 units, six samples contained 0.125 units, and 20 samples contained 0.063 units of endotoxin.

There was a significant correlation between coliform contamination of raw cow’s milk and 0.250 unit/mL endotoxin (P < 0.001). Increasing the number of coliforms in milk samples is consistent with the increase in endotoxin levels.

Milk is a food capable of satisfying most human nutritional needs. It is considered one of the most important animal proteins. It contains various valuable vitamins and minerals, the most important of which is calcium. Absorption of milk calcium improves considerably in the presence of lactose (1, 2).

Milk is free of bacteria or contains very few of them if it is milked from healthy dairy cows. The sanitary quality of milk, which must be considered by livestock keepers, is assessed based on total bacterial count and somatic cell count (3). Bacteria present in milk may acidify it, give it a bad taste, cause gelation of milk, and transmit diseases (4). Therefore, bacterial count of milk can be one of the important criteria in predicting the health of cows and the sanitary conditions of milking due to the fact that it indicates the manner of transportation and storage of raw milk in addition to serving as a common method of and being the most significant criterion for the process of assessing raw milk quality (5).

The presence of coliforms in milk indicates secondary infections and is a sign of it being unsafe for human consumption. Coliforms bacteria are destroyed very rapidly during the pasteurization process. Based on current standards, the number of coliforms must be less than 100 CFU/mL in raw cow’s milk and less than 10 CFU/mL in pasteurized milk. Moreover, there must not be any Escherichia coli per mL of pasteurized milk (6).

Endotoxin is a pyretic material in the cell walls of gram-negative bacteria and is usually called pyrogen. It has the structure of a lipopolysaccharide with a very toxic lipid, and it is of very low variety. However, the polysaccharide part of endotoxin has antigenic properties and is of very high variety (7, 8). Researchers explain that the handling and storage of raw milk alters the endotoxin concentrations, which may explain previous contradictory findings regarding the beneficial modulating effects on innate immunity toward allergy prevention in early childhood (8).

Considering the importance of milk hygiene, this research intended to determine the endotoxin levels in raw cow’s milk and coliform contamination of them.

In this research, random samples of raw cow’s milk (n = 43) were collected between April to September 2016. About 500 mL of unpasteurized milk were collected from the milk container, aseptically. The samples were immediately transported, in an icebox, to the laboratory. The pH values of milk samples were measured using a pH meter (9).

The total bacterial count was carried out according to the national standard No. 5484 using the pour plate method. Serial dilution (10-1 to 10-8) of the milk samples were made and 1 mL of each dilution was inoculated into duplicate plates of standard plate count agar and incubated at 30°C for 48 hours to determine the aerobic plate counts (10).

The MPN method was employed to identify coliform contamination of milk according to national standard No. 5234. The growth and appearance of colony on violet red bile agar, after 24 hours, at 35°C, were considered for a presumptive count. The growth and gas production in 2% brilliant green broth were used as the confirmatory test for coliforms. The isolated coliform bacteria were identified to genus and species using differential biochemical tests including MR, VP, citrate utilization, endol production, H2S production, motility, and fermentation in TSI agar (11, 12).

Cloning and sequencing of the beta-galactosidase gene (the LacZ gene) were performed by specific 326 bp long primers including the forward primer (5’ ~ ATGAAAGCTGGCTACAGGAAGGCC~3’) and the reverse primer (5’ ~ GGTTTATGCAGCAACGAGACGTCA ~3’) (13). The PCR was carried out in a thermocycler (model Gradient Master, Eppendorf, Germany). For each PCR, 17 µL of sterile distilled water, 2.5 µL of 10X buffer, 1.5 µL of 50 mM MgCl2, 1 µL of 10 mM dNTPs, 1 µL of each of the forward and reverse primers (10 pmol), 0.5 µL of DNA template, and 0.5 µL of Taq polymerase were used. The total volume of the reaction mixture was raised to 25 µL. The thermal regime in the thermocycler was adjusted as follows: initialization step at 94°C for 4 minutes followed by 35 cycles including the denaturation step at 94°C for 30 seconds, the primer-annealing step at 48°C for 35 seconds, and the amplification step of the desired segment at 72°C for 60 seconds. The final step at 72°C for 7 minutes ended the thermal cycle. Electrophoresis on 1% agarose gel was performed to ensure that the PCR conditions yielded the desired product. The samples were sent to the Sequetech company, USA, for sequencing using the Sanger method by employing an ABI 96 capillary instrument. The results of the sequencing were analyzed by using the Chromas software. Similarity of each sequence with the gene sequences in the NCBI database GenBank was determined using the BLAST software (14).

Endotoxin levels were measured using limulus amebocyte lysate (LAL) kits manufactured by the American company Lonza. At first, 200 µL of the milk inoculated to LAL vial, the content of the vial was completely mixed using a shaker, 100 µL of the mixture in the vial was added to vial containing 100 µL of the endotoxin-free water, the content of this vial was mixed, and 100 µL of it was added to vial 2, which contained 100 µL of the endotoxin-free water. In this way, endotoxin concentrations of 0.250, 0.125, and 0.063 unit/mL were prepared. All vials were placed in an incubator at 37°C for 1 hour and then examined for clot formation or gelation. The presence of milk clots indicated endotoxin contamination and lack of milk clots indicated the absence of endotoxin (15). The standard strain of Escherichia coli (ATCC: 25922) was used as positive control. Endotoxin-free water was used as negative control (16). 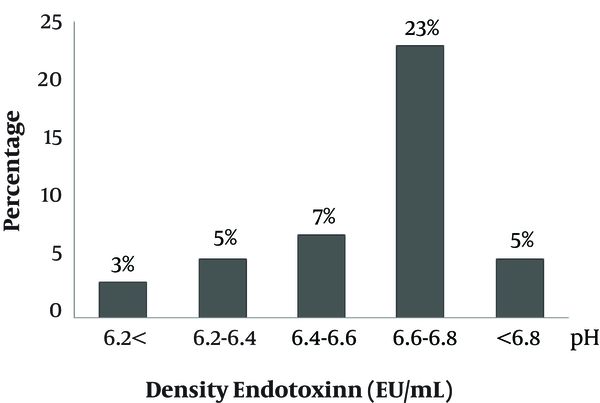 Bacterial counts were converted to Log10/mL and were clustered as showed in Figure 2. The standard MPN was used to determine the probable number of coliform bacteria. Complementary tests on raw cow’s milk samples indicated that 39.5% of them (17 samples) contained coliforms. Biochemical tests and molecular identification of the isolated coliforms revealed that 10 (23.25%) of the milk samples contained E.coli, 5 (11.62%) Enterobacter spp., 2 (4.65%) K.pneumoniae, and about 60.5% of the samples were free of coliforms contamination. 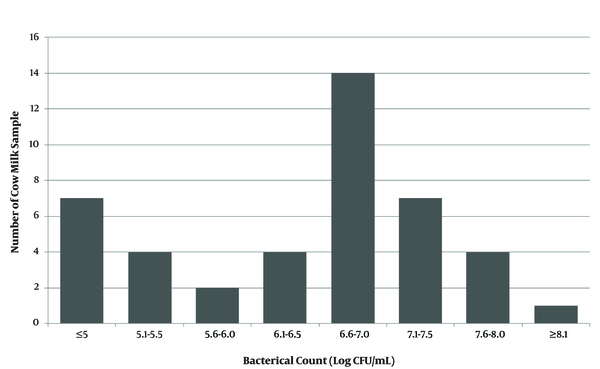 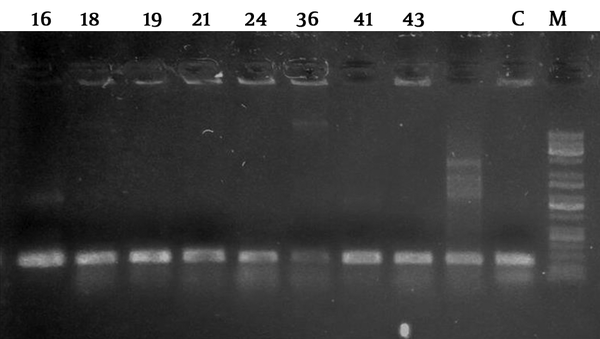 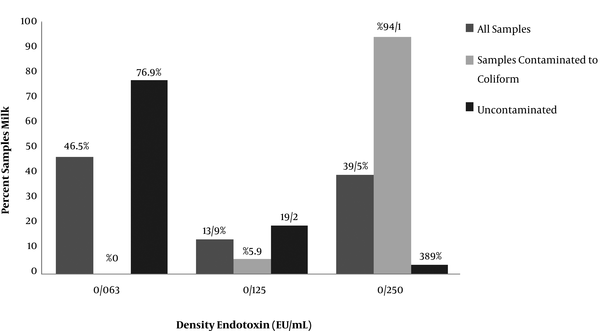 Statistical analysis showed that there was a significant relationship between the coliform contamination in raw cow’s milk samples and the presence of endotoxin at 0.250 unit/mL (P < 0.001), however, there was no significant relationship between coliform contamination of raw cow’s milk samples and endotoxin concentrations of 0.125 and 0.063 unit/mL. In other words, we can conclude that unpasteurized milk samples were contaminated with coliforms that contained endotoxin at higher concentrations than 0.063 unit/mL.

Milk is nutritious and highly nutritious nature of milk makes it a suitable medium for growth and proliferation of microbes. This research intended to compare endotoxin levels and coliform contamination of raw cow’s milk. Most of all cow’s milk samples have a nearly neutral pH (28%). We found that 39.5% of the samples contained coliforms and 60.5% of the samples were free of coliforms. The coliform bacteria isolated from the 17 contaminated samples were identified by PCR. Results showed that samples were contaminated with Escherichia coli, Enterobacter, and Klebsiella.

Considering the results of this research, the high microbial load in raw milk and traditional dairy products in Iran is confirmed, which could probably be due to unsanitary milking equipment and milk collection containers, unhygienic milking practices by workers and disregard for hygiene practices by milk sellers. Moreover, since bacteria die at high temperatures and the collected samples were not boiled at 100°C, the high microbial load and the presence of coliforms in milk samples were expected. Furthermore, since the samples were collected in the summer, the chances of milk contamination during transportation from the dairy farms to the milk stores rose.

In the study on 220 samples of milk and other dairy products sold at food stores conducted by BehzadianNezhad in Qom (1999), the maximum and minimum contamination levels were those of milk and ice cream, respectively. They found that 10.1% of the samples were contaminated with coliforms, however, Escherichia coli contamination were not detected. In the present research, E.coli were isolated from 23.25% of milk samples.

Employing the LAL test, the researchers conducted a study to assess endotoxin levels in raw cow’s milk at dairy farms and stores selling milk in several European countries. It was concluded that endotoxin levels varied in different European countries (20). The endotoxin levels in the stores were much higher compared to the dairy farms, which could be attributed to milk transportation from the dairy farms to the stores and to its storage in the stores (21). These results agree with those of the present research with respect to the high levels of endotoxin contamination in raw milk samples. Considering the fact that the samples in the present research were taken only from the stores in the city and all of the samples contained endotoxin, we can attribute milk contamination to a large extent to the sanitary conditions in the stores and to the hygienic status of milk retailers.

Suzuki et al. (15), employed the LAL test to study endotoxin levels in raw milk samples taken from completely healthy cows and from cows suffering from mastitis caused by gram-positive and coliforms bacteria. He observed that endotoxin levels in cows with mastitis resulting from gram-positive bacterial infection varied from 0.28 to 450 units/mL while the average endotoxin level in milk taken from cows with mastitis was 11523.5 units/mL. He concluded that endotoxin levels in milk taken from cows with mastitis were directly related to coliform mastitis. In the present study, in which the health of the cows was not considered, all of the samples tested positive for endotoxin, and 17 samples contained 0.250, six samples 0.125, and 20 samples 0.063 units of endotoxin/mL. Therefore, it is consistent that the handling and storage of raw milk alters the coliform contamination, which may explain findings regarding the endotoxin concentrations. There was also a significant relationship between coliforms contamination in raw milk and the presence of 0.250 units of endotoxin per milliliter of the raw cow’s milk samples.

There were some unavoidable limitations in our study. First, due to the inaccessibility and the high cost of the LAL kit, this research was done on a small size of cow’s milk samples. Second, this research was conducted in the summer. Performing research in different seasons can provide comparable results.

This work was a part of MSc thesis of F. Afshari Asfidoajani at the Islamic Azad University, Isfahan, Iran (No: 17230507931029). The Authors would like to thank the research laboratory personnel for their cooperation in this investigation.

Copyright © 2018, Zahedan Journal of Research in Medical Sciences. This is an open-access article distributed under the terms of the Creative Commons Attribution-NonCommercial 4.0 International License (http://creativecommons.org/licenses/by-nc/4.0/) which permits copy and redistribute the material just in noncommercial usages, provided the original work is properly cited
download pdf 390.42 KB Get Permission (article level) Import into EndNote Import into BibTex
Number of Comments: 0