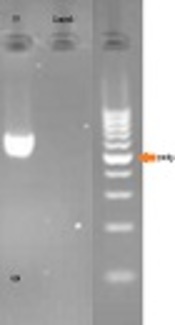 The First Report of GACAAC Mutation in Familial Hypercholesterolemia in Khuzestan

Familial hypercholesterolemia (FH) is a disorder with the autosomal dominant inheritance pattern caused mainly by mutations in LDLR, APOB-100, or PCSK9 genes. In most cases, the genetic cause of FH is a mutation in the LDLR gene, which leads to a rise in blood LDL cholesterol, premature coronary heart diseases (CHD), and premature atherosclerosis.

In this study, we examined a probable mutation in the exon of the LDLR gene in a case suffering from familial hypercholesterolemia in Khuzestan province. In this survey, a family suffering from FH was examined through the examination of the exons of the LDLR gene through the PCR-sequencing method. The observed mutation in the LDLR gen was a missense mutation GAC>AAC at position 492 in exon 10 of LDLR. GAC>AAC causes the conversion of the aspartic acid to asparagine.

LDLR gene mutations are considered as an important factor causing FH. Therefore, our results encourage future research to investigate more mutations as susceptible variants that might be involved in FH.

Familial hypercholesterolemia (FH) is a genetic disorder of lipoprotein metabolism presented by highly elevated plasma cholesterol levels. Atherosclerosis due to FH manifests primarily in adulthood and detrimental cardiovascular consequences due to FH commence in childhood (1). The early treatment of risk factors for FH can reverse the atherosclerotic changes in the arterial system (2). The cholesterol residuum in external tissues for this defection causes clinical manifestations, including tendon xanthoma xanthelasma, and corneal arcus (3). FH represents the phenotypic manifestation of abnormal lipoprotein metabolism caused by a variety of genetic abnormalities. Mutations in the low-density lipoprotein receptor (LDLR) are the cause of single-gene FH. Over 1,500 mutations in this gene have been detected (4, 5) and these account for more than 80% of cases of monogenetic FH (6). In addition to LDLR, two other sets of autosomal dominant mutations play a key role in the pathogenesis of FH; the first one is a defective apo-B100 component (7-9) and the second one is a gain of function mutation affecting pro-protein convertase subtilisin/kexin 9 (PCSK9) (10). However, the rare autosomal recessive form of FH, called autosomal recessive hypercholesterolemia, has been described in a few families (11, 12). In the present study, we report a case of rare mutation discovered from the direct mutation screening of all exons in the LDLR gene in one Iranian patient with HF.

The patient was a 41-year-old Arab man (2011) whose parents were cousins and died from Atherosclerosis. The cardiologist confirmed FH by the diagnostic criteria for this man in Imam Hospital of Ahvaz. The Simon Broom criteria were used for FH diagnosis (total cholesterol > 290 mg/dL (LDL-C > 190 mg/dL) in adults). In addition, the physical finding of the patient included tendon xanthomas over the elbow, Achilles tendon, and corneal arcus.

Five mL of peripheral blood was collected in EDTA. DNA was extracted by the standard salting-out protocol. LDLR Gene-speciﬁc PCR primers were synthesized for all exons (a list of the primers used is available on request). The primers (Primer3 software, Gen Fanavaran, Iran) for exon 10 amplification were F: ‘5-ACCCTGCAGGATGACACAA-3’ and R: ‘5-GCCCACTAACCAGTTCCTGA-3’ that amplify 654 bp fragment.

The PCR program was conducted under the following conditions: 100 ng of genomic DNA, 200 μM of deoxyribonucleotide triphosphates (dNTPs), 1.5 mm of MgCl, 2.5 units of SuperTaq polymerase, and 25 pmol of each primer. The ampliﬁcation was carried out in 25 μL volumes and 35 cycles: 90°C for 1 minute, 58°C for 30 seconds and 72°C for 45 seconds. Gel electrophoresis was applied for confirming PCR. Direct sequencing of exons was performed by the Big-dye terminator cycle sequencing ready reaction kit (Applied Biosystems) on an ABI automated genetic analyzer (Applied Biosystems). The same PCR primers were used for sequencing. Finally, the sequences were compared to the reported gene sequence using the BLASTN program.

Gel electrophoresis for confirming PCR is illustrated in Figure 1. 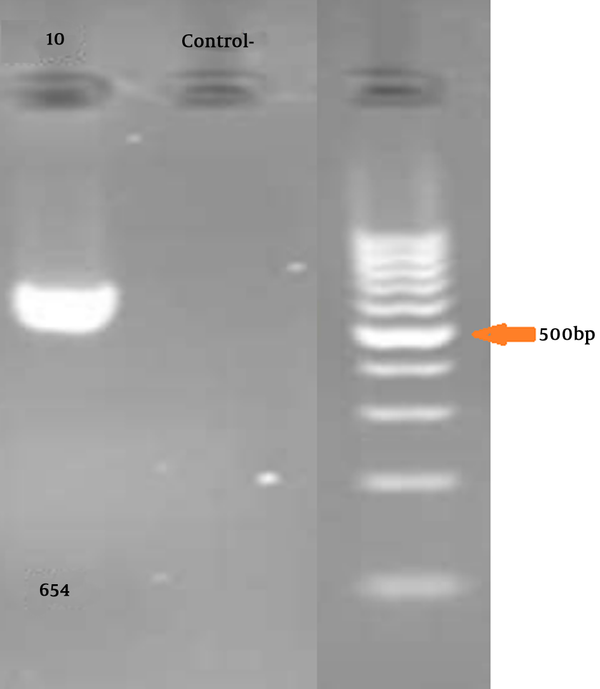 Direct sequencing analysis of the patient, after comparison with LDLR reference sequence (Gene ID: 3949), demonstrated a sporadic homozygous missense mutation GAC>AAC substitution in exon 10 of the LDLR gene in the patient (Figure 2) and heterozygous missense mutation in the siblings of the proband (Figure 3) (codon number: 492), which causes an amino acid exchange of aspartic acid to asparagine (Figure 2). 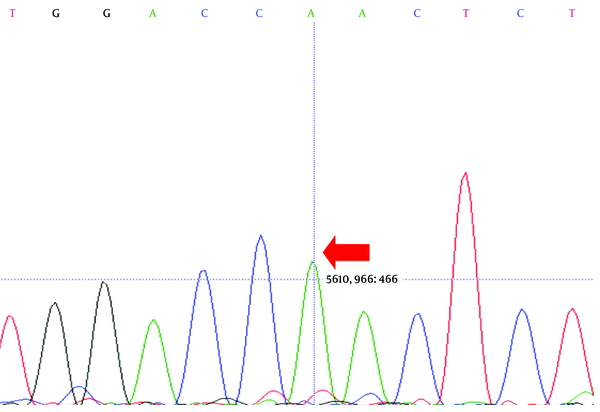 The result of genetic sequencing, indicating the homozygous missense mutation in exon 10 of the patient’s LDLR gene (sequencing with forward primer) 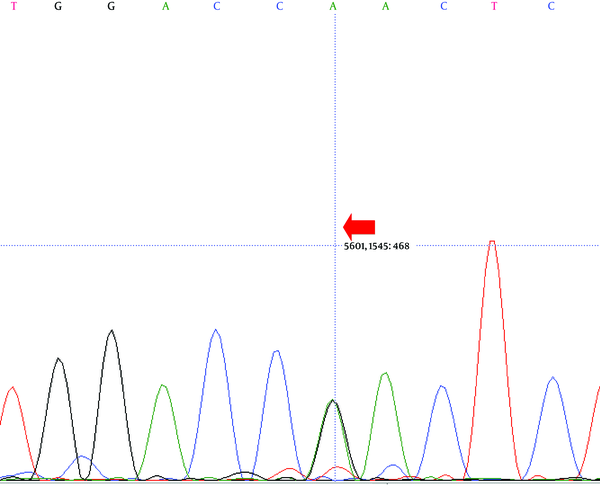 The result of genetic sequencing, indicating the heterozygous missense mutation in exon 10 of the proband’s siblings the LDLR gene (sequencing with forward primer)

LDLR gene mutations are considered as an important factor causing FH. In 85% of patients, mutations concern the LDLR gene (13).

As a result, we identified a genetic variant of LDLR in the FH patient. It was a missense mutation GAC>AAC located in exon 10 of the LDLR gene, which changes Aspartic acid to Asparagine. The LDLR gene encodes a protein with binding domains for apolipoproteins B and E (18, 19). Our found mutation changes the bioactivity of LDLR, resulting in FH; this finding can be useful for the detection of FH in Arab families.

Copyright © 2018, Zahedan Journal of Research in Medical Sciences. This is an open-access article distributed under the terms of the Creative Commons Attribution-NonCommercial 4.0 International License (http://creativecommons.org/licenses/by-nc/4.0/) which permits copy and redistribute the material just in noncommercial usages, provided the original work is properly cited.
download pdf 310.56 KB Get Permission (article level) Import into EndNote Import into BibTex
Number of Comments: 0