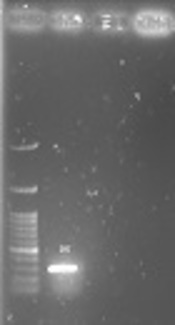 Isolation and Detection of Vibrio vulnificus from Coastal Seawater of Babolsar

Vibrio (v.) vulnificus strains are a human pathogenic bacteria that reside innately in coastal seawaters and shellfish. The bacteria can cause severe skin infections and quickly develop a lethal septicemia in immunocompromised individuals, who have eaten raw shellfish.

The goal of this investigation was to define the prevalence of V. vulnificus in seawater samples collected from coastal seawaters.

Three hundred seawater specimens were prepared during spring and summer. Isolated bacteria were confirmed by the polymerase chain reaction (PCR) technique and by sequencing of PCR products.

Vibrio vulnificus strains are halophilic, motile, curved, gram-negative bacteria that exist in coastal waters worldwide and are a commensal bacteria in shellfish and fish (1). The bacteria is positive oxidase (2). The strains of V. vulnificus are divided to three biotypes. All biotypes of V. vulnificus are pathogenic for humans. Biotype 1 is the most prevalent cause of septicemia (3). The number of culturable V. vulnificus strains typically decreases by reducing water temperature. In this condition (water temperature below 15°C), the bacteria may enter a viable but non-culturable (VBNC) step. The highest densities are observed during the warm months. Salinity influences the numbers of culturable V. vulnificus, as the highest densities are generally detected at salinities between 5% and 25% (4). Roland et al. introduced the first clinical case of V. vulnificus infection in 1970 (5). In addition, the first wound infection created by V. vulnificus was reported in 1979 by Blake et al. (6). Ingestion of raw or inadequately cooked seafood containing V. vulnificus can lead to sepsis. The signs and symptoms of sepsis caused by these bacteria involve fever, chills, nausea, endotoxic shock, and the development of secondary wounds on the extremities of patients. Mortality rates have been reported as greater than 50% in patients with primary sepsis, and about 25% for wound infections. Wound infections progress quickly to cellulitis, ecchymoses, and bullae, which can lead to necrotizing cellulitis and even secondary sepsis at the site of infection (7, 8). The virulence factors of V. vulnificus include resistance to stomach acid, capsule, endotoxin, cytotoxins, pilus, and flagellum (8, 9). Several PCR assays have been designed for diagnosis of V. vulnificus yet were unable to find V. vulnificus strains. Therefore, the gyrB gene was chosen for detection of V. vulnificus as previously described by Kumar et al. (10). This gene codes the B subunit of the gyrase, which removes positive supercoils during DNA replication (10). Up to now, no investigation has been done on the prevalence of the bacteria in coastal water of Babolsar. Babolsar is one of the coastal cities of the Mazandaran province (north of Iran). The goal of this investigation was to define the prevalence of V. vulnificus in seawater samples, collected from coastal waters of Babolsar by the PCR method.

Three hundred (300) coastal seawater specimens were taken during the spring and summer of 2017. The sample size was determined by the Morgan table. The reason to choose spring and summer for the study was that increasing temperature leads to higher salinity water; therefore, bacteria isolation will be possible. Seawater samples were added, at a depth of 50 cm, to sterile bottles. In sampling, water temperature was measured using a thermometer. Samples were processed within six hours of sampling. To isolate V. vulnificus from seawater, 25-mL samples were added to 225 mL of peptone water and kept at 37°C for six hours. Ten microliters of the cell suspension were then transferred onto thiosulfate citrate bile sucrose (TCBS) agar and incubated at 37°C for 24 hours. Suspected colonies of V. vulnificus (green colonies) were picked from the plates and identified by PCR (11, 12).

DNA extraction was accomplished by the boiling method. In total, 1.5 mL of an overnight culture of V. vulnificus was centrifuged at 6000 rpm for five minutes. The cell pellet was suspended in 300 μL of TE buffer (10 mM Tris-HCl, 0.5 mM EDTA, pH 8), boiled for 10 minutes, and subsequently cooled on ice for five minutes. After incubation on ice, the tube was centrifuged at 10,000 rpm for 5 minutes at 4°C. The supernatant (200 μL) was added to a fresh sterile tube and stored at -20°C for long preservation (13).

2.3. Confirmation of Vibrio vulnificus by the Polymerase Chain Reaction

Confirmation of all V. vulnificus strains was performed on all of the green colonies that appeared on TCBS Agar by the PCR technique, as formerly reported by Kumar et al. in 2006. Due to unavailability of a positive control, detection was done via sequencing of PCR products. The PCR products were sequenced by Bioneer corporation. The primers were used for the amplification of a 285-base pair (bp) part of V. vulnificus gyrB gene (10). Table 1 shows the sequence of primers employed for the current investigation.

Table 1. The Sequence of Primers Used in the Current Investigation

The PCRs were performed in a final volume of 20 μL. The reaction mixture included 2 μL of DNA template, 2 μL of 10x PCR buffer, 0.4 μL of deoxynucleoside triphosphates (10 mM), 0.6 μL of 50 mM MgCl2, 0.2 μL of Taq DNA polymerase (5 U), 0.5 μL of each primer (20 pmol), and 10.8 μL of distilled water. Initial denaturation at 94°C for 5 minutes, followed by 30 cycles of denaturation at 94°C for 30 seconds, annealing at 60°C for 30 seconds, and extension at 72°C for 30 seconds. The final extension was done at 72°C for five minutes (12). Gel electrophoresis of PCR products was accomplished on a 2% agarose gel and observed by UV transilluminator after ethidium bromide (EtBr) staining. Data were analyzed by the SPSS software version 16. 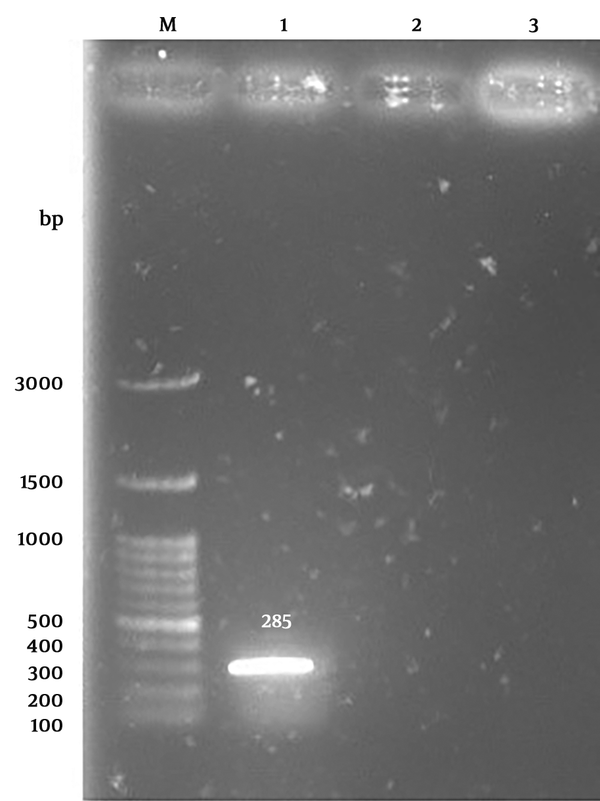 To establish the accuracy of the primers, the PCR product was sequenced using forward and reverse primers. Thereafter, the sequences were aligned with the corresponding region of nucleotide sequence, accessible on the GenBank database with accession number: NC_005139.1. The basic local alignment search tool (BLAST) analysis revealed that the PCR product derived from the V. vulnificus sequence showed similarity of 94% with the GenBank gyrB sequence. Therefore, V. vulnificus was detected (Figure 2). 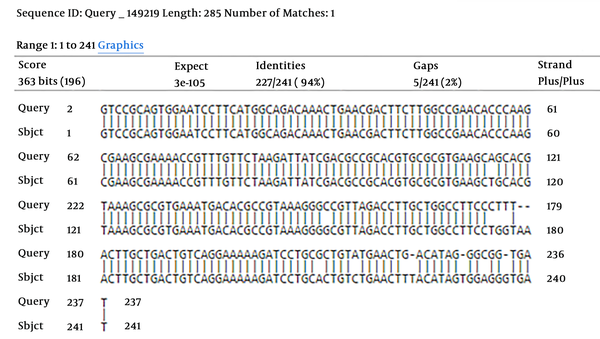 The results of the PCR technique showed two (0.72%) positive amplifications of the gyrB gene from 276 the presumptive V. vulnificus isolates. Vibrio vulnificus was not detected in any specimens collected during March, April, and May (average water temperature of 15°C) yet was observed in water samples collected during summer (average water temperature of 25°C).

Copyright © 2018, Zahedan Journal of Research in Medical Sciences. This is an open-access article distributed under the terms of the Creative Commons Attribution-NonCommercial 4.0 International License (http://creativecommons.org/licenses/by-nc/4.0/) which permits copy and redistribute the material just in noncommercial usages, provided the original work is properly cited.
download pdf 1.57 MB Get Permission (article level) Import into EndNote Import into BibTex
Number of Comments: 0