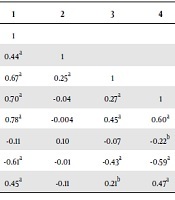 The Relationship Among Mindfulness, Acceptance, and Academic Procrastination in Students

One of the variables that is related to anxiety and academic procrastination is acceptance. Acceptance has been conceptualized as a regulatory process which enables people to experience the present moment without judgment or avoidance (6). Acceptance has a significant correlation with anxiety (7). Additionally, procrastination is negatively correlated with acceptance (8) because procrastination is a way to avoid and run away from negative thoughts, sensations, and emotions to feel better in the short term (9). Acceptance and commitment therapy (ACT) suggests psychological problems originate from experiential avoidance (10). ACT highlights the importance of skills in non-judgmental acceptance of present-moment experiences which seems especially well suited to the treatment of academic procrastination, that is a kind of avoidance (11). Acceptance is aimed at developing psychological flexibility which is considered as the ability to choose activities according to one’s values in spite of unpleasant or unwanted private feelings and thoughts. Mindfulness is another construct that is associated with lower levels of rumination, worry, anxiety, depression, and anger (12). Mindfulness is considered as a non-judgmental awareness of the present feelings, thoughts, and in general experiences with openness and acceptance (13). Excessive orientation toward the future or past in dealing with stressors may have a correlation with anxiety (13). A study showed procrastination was negatively correlated with mindfulness (4), and low mindfulness explained stress associated with procrastination. A study showed acceptance and mindfulness contributed to the variance of procrastination (8). Procrastinators experience lower acceptance of themselves (14). A study investigated the relation between procrastination and anxiety, considering self-compassion as a mediator (3). Another research investigated the relationship between anxiety and acceptance in Iranian students (15). However, research on the relationship among these variables is still in its nascent stages. Previous studies have focused on investigating the efficacy of acceptance-based interventions on procrastination and anxiety disorders in the clinical sample. Noteworthy, most studies have investigated the effectiveness of mindfulness-based therapy on anxiety disorders in clinical samples. Only a few studies have studied the relationship between mindfulness and state anxiety in a non-clinical sample. It is not clear if acceptance and mindfulness can increase the prediction of academic procrastination over trait anxiety in the Iranian culture, since the judgment, lack of acceptance, and procrastination are strongly influenced by cultural differences (3, 16). Judgment and lack of acceptance are more common in Eastern cultures like Iran (3). Prior researches showed that Eastern participants are more likely to judge themselves (3). On the other hand, Eastern participants tend to show a higher level of procrastination (16).

In this cross-sectional research, students were selected via the cluster sampling method from Shahed University, with the total population of 10672. Some classes were chosen randomly and then questionnaires were distributed among students who agreed to participate in the research. Informed consent was obtained from participants. All procedures performed in studies involving human participants were in accordance with the ethical standards of the institutional and/or national research committee and with the 1964 Helsinki declaration and its later amendments or comparable ethical standards.

Green (17) suggested to test the individual predictors a minimum sample size of 104 + k is necessary (where k is the number of independent variables). Therefore, participants for this correlational research include 111 university students, including 56 female students and 55 male students. The mean age of the subjects was 20.72 (± 2.32) years.

The following measures were used in this research.

The Kentucky inventory of mindfulness skills (KIMS) was developed by Baer et al. (18). It contains 39 items and is designed to measure dimensions, including acceptance without judgment, observing, act with awareness, and describing. The KIMS items are rated on a 5-point Likert scale. The internal consistency of this scale has been reported between 0.76 and 0.91 for four subscales (18). An Iranian version of the KIMS has a Cronbach’s alpha of 0.82 (19).

The acceptance and act inventory-second edition (AAQ-II) has seven items; it was developed by Bond, et al. (12). The mean Cronbach’s alpha for clinical and non-clinical groups was 0.84. The AAQ-II was also validated in Iran. Cronbach’s alpha of AAQ-II was reported 0.82 (22).

Solomon and Rothblum (1984) presented the procrastination assessment scale-student (PASS) (1). PASS consists of 18 items. Alpha coefficient of PASS was reported 0.77 (23). Researchers reported the reliability of 0.78 (24). Noteworthy, the factor analysis showed that there are four factors (24).

Descriptive results are presented in Table 1. Table 1 represents an acceptable Kurtosis and Skewness of procrastination.

Table 1. Descriptive Findings of Variables Including Procrastination, Anxiety, Mindfulness and its Subscales

Results concerning the correlation among variables are presented in Table 2.

Table 2. Correlations Among Variables Including Procrastination, Anxiety, Mindfulness, and its Subscales

First, assumptions of multiple regression are tested. A linear relation among procrastination, mindfulness, and anxiety exists. No multicollinearity was observed, with VIF being lower than 10 and tolerance being above 0.2. Durbin Watson value in this research is 2.10. Homoscedasticity in this study was met. Residuals also have a normal distribution. The values of Cook’s Distance were below one.

Only two components of mindfulness including act with awareness and describing have a significant relationship with procrastination (P ≤ 0.05).

The anxiety was entered in the first step, and then the acceptance and components of mindfulness were entered in the second step (Table 3). Results indicated anxiety significantly predicted procrastination (R2∆ = .15; P < 0.001). Furthermore, acceptance and the components of mindfulness did not contribute to the prediction of academic procrastination after controlling for trait anxiety (R2∆ = .02; P > .05). In the second step, no variable had a significant contribution to the prediction of the dependent variable.

This study aims at investigating whether mindfulness and acceptance can increase the prediction of academic procrastination over and beyond trait anxiety. Results showed that anxiety is significantly correlated with procrastination. This finding is consistent with previous results (8, 9, 14). This study also showed that acceptance, act with awareness, and describing did not contributed to the prediction of academic procrastination over and beyond trait anxiety. This result is inconsistent with the result of Glick et al. (8). Cultural differences may explain this finding. A study (3) showed the higher levels of self-judgment and overidentification in the Iranian culture, so that among six components of self-compassionate only self-judgment and overidentification fully explained the relationship between anxiety and procrastination. Another study in Eastern culture verified the higher level of self-judgment (18) showed that Taiwanese had a higher level of self-judgment and over identification. Inducing shame by Taiwanese parents is a way to socialize and discipline children (19). They also frequently judge and criticize their children as a mean to correct their behavior. Eastern societies use shame and judgment to correct behavior. On the other hand, Eastern participants tend to show a higher level of procrastination (16).

Since excessive orientation toward the future or past when dealing with stressors may have a correlation with anxiety (20), the non-judgmental experience of the present moment may effectively counter the influences of stressors (3). Mindfulness via teaching individuals to react to stress more reflectively may effectively counter avoidance reactions aimed at changing the frequency or intensity unpleasant internal experiences (24). These maladaptive strategies can play a significant role in the maintenance of many emotional disorders.

The main processes that result in psychological inflexibility include experiential avoidance and cognitive fusion (26). Cognitive fusion happens when people overidentify with thoughts that dominate behavior and limit the possible repertoire of responses (10, 26). Furthermore, overidentification with thoughts contributes to experiential avoidance. The experiential avoidance is considered as the attempt to eliminate, control, or avoid unwanted experiences (26). Experiential avoidance and cognitive fusion play a significant role in academic procrastination (27). Doubts about self-efficacy and/or negative thoughts about a task, and fears of failure increase unpleasant feelings, so students tend to avoid them, delaying starting or finishing the task. Research showed task salience, fear of failure, task aversion, and locus of control have a significant role in procrastination (27). ACT considers these variables as indicators of psychological inflexibility. On the other hand, mindfulness leads to a significant reduction of stress (28) and increase of persistence (29). These findings show procrastination is aimed at regulating the immediate mood, which is not successful. In conclusion, non-acceptance of private experiences is one route to anxiety, which can lead to lack of persistence to avoid the tasks. As a result, further anxiety is experienced when the tasks are procrastinated. It is recommended that studies address other variables which are thought to underlie the relationship between anxiety and procrastination.

The current results can be seen within the context of some limitations. This study cannot establish the directionality of the causal links. Longitudinal designs can be helpful in investigating the directionality of links presented by theory. Secondly, this study focused on student sample, which can limit the generalizability of the findings. So, it is suggested that future studies focus on community sample and conduct a longitudinal research.

Researchers of this study would like to express their sincere gratitude to all of the participants.

Copyright © 2019, Zahedan Journal of Research in Medical Sciences. This is an open-access article distributed under the terms of the Creative Commons Attribution-NonCommercial 4.0 International License (http://creativecommons.org/licenses/by-nc/4.0/) which permits copy and redistribute the material just in noncommercial usages, provided the original work is properly cited.
download pdf 138.86 KB Get Permission (article level) Import into EndNote Import into BibTex
Number of Comments: 0