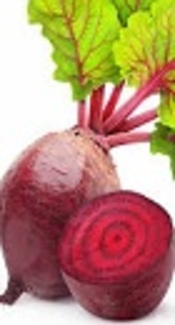 The results of the current study indicated that the ethanol B. vulgaris extract at 200 mg/kg showed positive activity against the adverse effects of scopolamine.

Learning and memory significantly contribute to humane everyday life and are the basis for education and teaching (1). The hippocampus is a major component of the human brain associated with memory formation. The CA1 hippocampal region mediates synaptic plasticity and is involved in the acquisition, retention, and retrieval of memory. The hippocampus is anatomically connected to various subcortical regions including the medial septum (2). Cholinergic projections from the medial septum to the hippocampus can modulate hippocampal memory formation. Studies show that many drugs can influence memory including cholinergic drugs that have positive effects on memory while anticholinergic, anti-psychotic and anesthetic drugs exert adverse effects (3). Scopolamine is an anticholinergic drug that causes memory deficits by impairment of long-term potentiation. Scopolamine is commonly used to discern the efficacy of various anti-amnesic drugs. It is observed that cholinesterase inhibitors (ChE), which enhance central cholinergic function, boost memory and learning skills (3, 4).

Oxidative stress due to the adverse effects of free radicals has also a key role in the pathophysiology of brain and memory deterioration (2). Therefore, antioxidant agents may be effective to treat memory and learning deficits. It is recently observed that natural antioxidants derived from plant materials reduce free radical-induced neuronal damage (5, 6).

Beta vulgaris (chukandar or beetroot) is an herbaceous biennial or, rarely, perennial plant with leafy stems in the Chenopodiaceae family, a native to Mediterranean region that is extensively cultivated in different countries including Iran (7). B. vulgaris in traditional medicine is used to treat a variety of diseases and disorders. B. vulgaris leaf contains a variety of phytoconstituents such as betalains, flavonoids, polyphenols, minerals, and vitamins, with reportedly antioxidant activity (7, 8). It is reported that B. vulgaris leaves have diuretic, purgative, laxative, aphrodisiac, antioxidant, antibacterial, and anti‑inflammatory activities, and they are also used to treat fevers, alleviate paralysis, spleen, and liver diseases and bind wounds (7, 9, 10).

3.1. Preparation of Ethanol Extract of B. vulgaris Leaves

Fresh leaves of B. vulgaris were purchased from vegetable markets of Sanandaj. After identification, leaves of B. vulgaris were stored in the herbarium of Islamic Azad University of Sanandaj (No.: 45678).The fresh B. vulgaris leaves were shade dried in open air at room temperature. Dried leaves were powdered finely and then macerated with 97% ethanol for five hours. Then, the mixture was filtered and concentrated to dryness by a rotary evaporator at 40ºC (11). Standardization of B. vulgaris leaf extract was performed by determination of its antioxidant activity, total phenol, flavonoid, and flavonol content.

Fifty male Wistar rats (3 - 4 months old, 200 - 250 g) were kept under standard conditions (12:12 hours light/dark cycle at 22ºC ± 2ºC) with ad libitum access to water and standard laboratory rodent pellet. Animals were randomly assigned into five groups each including 10 rats. The control group only received distillated water daily for 15 days intraperitoneally (IP), the scopolamine-treated group received scopolamine (1 mg/kg in 1 mL distilled water, IP) daily for 15 days. The extract-treated groups received B. vulgaris leaf extract at 50, 100, and 200 mg/kg IP 30 minutes after scopolamine administration. The doses were selected based on previous studies (12). After 15 days of treatment, passive avoidance test was performed for four days (13), then the brains of the rats were removed and their antioxidant capacities and malondialdehyde (MDA) levels were measured.

3.3. Determination of Antioxidant Activity of B. vulgaris Leaf Extract

In the current study, antioxidant activity was evaluated according to DPPH (1, 1-diphenyl-2-picrylhydrazyl) radical scavenging. In brief, 2 mL of B. vulgaris leaf extract in various concentrations was mixed with 0.1 mM DPPH solution and incubated for 15 minutes in the dark under room temperature. Then, the optical absorbance of samples at 517 nm was read. the control sample had 2 mL ethanol and 2 mL DPPH solution. The DPPH scavenging activity was evaluated using the following equation (13):

3.4. Determination of Total Phenolic Content of B. vulgaris Leaf Extract

Totally, 0.1 mL of B. vulgaris leaf extract at a dose of 1 mg/mL was added to 0.5 mL of Folin-Ciocalteu reagent. Then, the solution was mixed with 0.4 mL of 7.5% Na2CO3 and incubated under room temperature for 30 minutes; then, the optical absorbance of reaction mixture was read at 750 nm. A standard curve was prepared with different doses of gallic acid. The total phenolic content was expressed as milligram of gallic acid equivalents/g of sample (13).

3.5. Determination of Total Flavonoid Content of B. vulgaris Leaf Extract

Total flavonoid content in the B. vulgaris leaf extract was measured using the colorimetric method; 0.5 mL of B. vulgaris leaf extract was added to 0.5 mL of 2% aluminum chloride and 3 mL of 5% potassium acetate; 40 minutes later, the optical absorbance at 415 nm was read at room temperature. A standard curve was plotted by various doses of rutin solution. Total flavonoid content was expressed as milligram of rutin equivalents/g of dried extract (13).

3.6. Determination of Total Flavonol Contents of B. vulgaris Leaf Extract

Totally, 0.1 mL of B. vulgaris leaf extract was mixed with 0.5 mL of 2% aluminum chloride and 3 mL of 5% potassium acetate; after incubation at room temperature for 2.5 hours, the optical absorbance of the mixture was measured at 415 nm. Total flavonols content was expressed as rutin equivalent (mg/g) (13).

Shuttle box apparatus was employed to measure passive avoidance memory. Shuttle box has two chambers of equal size that are separated by a guillotine door. An electric light bulb illuminates one chamber, while the other chamber is dark. Mild electric shocks can be applied via the grid floor and the animal remembers the shock when it is tested again later. This test is fear-based and conventionally lasts four consecutive days. On the first day, rats were placed individually in the instrument to become familiar with the device for five minutes. On the third day, animals were placed separately in the light chamber for 20 seconds, then the guillotine door was opened and the latency to enter into the dark chamber was considered to indicate initial latency (IL). When the rat entered the dark chamber, the door was closed at once and a mild shock was applied (1 mA, 1 second once). Twenty four hours later, each rat was left in the light chamber and latency to enter the dark chamber was considered to indicate step-through latency (STL) (13).

The antioxidant capacity in brain was measured by ferric reducing antioxidant power (FRAP) assay. In order to prepare FRAP solution, 25 mL of acetate buffer, 2.5 mL of 2, 4, 6-tripyridyl-s-triazine and 2.5 mL of FeCl3 were mixed. Brain tissue homogenate was centrifuged (3000 rpm, 10 minute) and 50 mL of the supernatant was mixed with 5.1 mL of FRAP solution and incubated for 10 minutes under room temperature. Then, the absorbance of mixture was measured at 590 nm (13).

Brain tissue was homogenized in pre-chilled KCL solution (1: 10 wv-1) and poured into a 20-mL tube. After incubation for 60 minutes at 37ºC, the suspension was dissolved in 1 mL of 5% trichloroacetic acid and 1 mL of 67% thiobarbituric acid (TBA), and centrifuged at 2000 rpm for 15 minutes. The obtained supernatant was poured into another tube and left in a boiling water bath. After 10 minutes, sample was cooled and its absorbance was measured at 535 nm (14).

Data were expressed as the mean (± SD). The normality assumption was checked using the Kolmogorov-Smirnov test. The homogeneity of variances was investigated using the Levene test. One-way ANOVA was used to compare the mean values between experimental groups followed by the Duncan test in the case of equal variances, while if the variances were unequal, Dunnett T3 was used. P < 0.05 was considered as the level of significance.

The effect of scopolamine and B. vulgaris leaf extracts on initial latency (IL) in the passive avoidance test is shown in Figure 1. There were no significant differences in initial latency between the groups (P > 0.05). As presented in Figure 1, the STL in the scopolamine-treated rats was shorter than that of the control group, yet insignificantly. The treatment with B. vulgaris leaf extract at 50, 100, and 200 mg/kg ameliorated the shortened STL in the scopolamine-treated group. This increase in STL was significant at 100 and 200 mg/kg compared with that of the scopolamine group (P < 0.05). 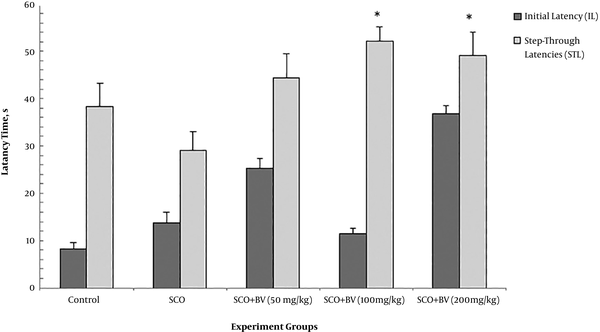 4.3. Effect of B. vulgaris Leaf Extract on Brain Antioxidant Capacity 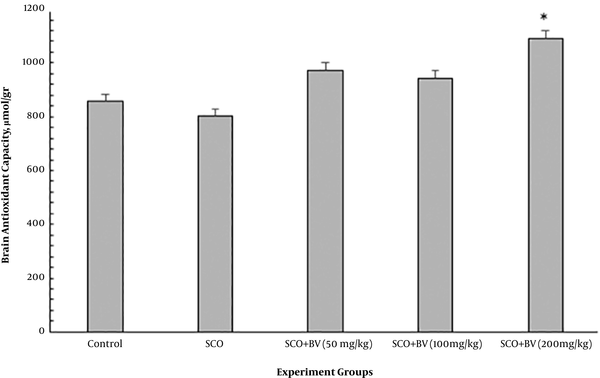 4.4. Effect of B. vulgaris Leaf Extract on Brain MDA Level

Reduction of antioxidant capacity and increase of lipids peroxidation within the brain of rats treated with scopolamine were previously reported (16). Scopolamine-induced memory deficits is associated with an increase in oxidative markers of the entire brain and also in the regions related to learning and memory. It was observed that scopolamine impaired the metabolism of low molecular weight antioxidants such as glutathione (17). Positive effects of antioxidant compounds on the scopolamine-induced oxidative stress and memory deficits were also reported in previous studies (18, 19).

According to the current study results, ethanol extract of B. vulgaris leaf possessed significant positive effects on scopolamine-induced memory and learning deficits, which may be partly due to its antioxidant properties through scavenging free radicals to inhibit lipid peroxidation and increasing antioxidant defenses. The anti-acetylcholinesterase activity of B. vulgaris leaves may be another mechanism that helped to improve memory functions. Further investigations are needed to determine the main constituents involved in improving the memory and cognitive functionality.

The authors would like to thank the staff of the laboratory of Islamic Azad University, Izeh Branch, Iran for cooperation with the work.

Copyright © 2018, Zahedan Journal of Research in Medical Sciences. This is an open-access article distributed under the terms of the Creative Commons Attribution-NonCommercial 4.0 International License (http://creativecommons.org/licenses/by-nc/4.0/) which permits copy and redistribute the material just in noncommercial usages, provided the original work is properly cited.
download pdf 304.74 KB Get Permission (article level) Import into EndNote Import into BibTex
Number of Comments: 0