The use of natural compounds in relieving pain has been commonplace since ancient times and their use is currently increasing.

Given that analgesic and anti-inflammatory effects of Kombucha have not been studied, this study was designed to examine these effects in vitro.

The results of this study indicate that Kombucha has analgesic effects in rats and can be considered in future treatments.

Pain is an undesirable feeling caused by damage to various tissues due to physical, chemical, thermal, or electrical stimuli, and is a warning factor that indicates the presence or likelihood of risk in an organ (1). Around the world, millions of people suffer from different types of pain and seek out drugs with more effects and fewer side effects (2), including pain control methods using non-steroidal anti-inflammatory drugs (NSAIDs) or narcotic drugs that have relatively high side effects. In addition, opioids cause dependence if chronically used (3). Opioid drugs, especially morphine, have high efficacy in the relief of acute and chronic pain, but the repeated use of morphine decreases its effects gradually and reduces the activity of the immune system, and therefore more amount of the substance is required to achieve the same effect (4).

Inflammation is the reaction of the body to injuries that occur after scratching, burning, or any tissue damage. In fact, inflammation is a physiological response of the body to stimuli, which may be a microbial, chemical, physical, or even autoimmune response to cells. One of the results of inflammation is the separation of the affected area from other tissues (5). Besides, NSAIDs are one of the most widely used medicines. The mechanism of action of NSAIDs is to inhibit certain enzymes in the body. Enzymes are specific proteins that exist in the body and can facilitate some chemical reactions. Non-steroidal anti-inflammatory drugs inhibit an enzyme called cyclooxygenase (COX). This enzyme produces a substance called prostaglandin, which produces inflammation process and pain in the body. Therefore, the inhibition of the enzyme decreases the production of prostaglandins and consequently inflammation. This group of drugs at high doses have anti-inflammatory effects. Besides, NSAIDs are unique because they are nonnarcotic and do not lead to addiction. These drugs include naproxen, aspirin, and ibuprofen (6).

People around the world claim that consuming tea from Kombucha, a traditional beverage, improves many physical illnesses. Currently, it is commonly used in the United States, mainly due to its ability to relieve fatigue and its therapeutic effects (7). Kombucha is a sweet black tea, which is produced in about 14 days by combining the coexisting acetic acid bacteria and the yeast that forms the tea mushroom. A layer of floating cellulose shell and fructose broth make up two parts of the Kombucha tea. Its taste is similar to apple wine and can be cooked in the house by fermentation. Although green tea can be used to prepare Kombucha, black tea and white sugar are considered to be the best substrates (8). The beneficial effects of Kombucha are attributed to the presence of tea polyphenols, gluconic acid, glucuronic acid, lactic acid, vitamins, amino acids, antibiotics, and various types of nutrients produced during fermentation (9). It has been reported to have a pharmaceutical effect against metabolic diseases, arthritis, indigestion, and various types of cancers. Recent studies have shown that Kombucha prevents paracetamol-induced hepatotoxicity (10), and also prevents oxidative stress induced by chromate (VI) in albino rats (11). The oral administration of Kombucha to the mice exposed to various types of protein oxidation has also shown its potent antioxidant properties, which reduces lipid oxidation and DNA fragmentation (12).

Given that analgesic and anti-inflammatory effects of Kombucha have not been studied, this study was designed to examine these effects in vivo.

To prepare Kombucha, 220 mL of refined tap water was boiled and 200 g of sugar was added to it. The resulting mixture was boiled again for 2 - 3 minutes. Then, 30 mL of high-quality ordinary brewed tea (Iran, Lahijan) was added to it, and after cooling, it was filtered and transferred to a glass container with a wide opening. The fungi (Manchurian mushroom, botanical name Medusomyces gisevii) were washed and added to the container, and after 10 days, the fungus was taken out of the container and the solution remaining in the container was used as a tea of Kombucha. The culture was kept away from any direct source of light and allowed to ferment at 25 ± 2°C (10). The fermented tea was strained in a double-layered nylon net and used in animal experiments. Kombucha tea at 250, 500, and 1000 mg/kg was injected intraperitoneally to animals.

Male adult rats weighing 200 - 250 g were selected. Animals were kept at temperature 21 ± 2°C and 12:12 h light/dark cycle with free access to the same water and food. The study protocols were approved by the local Ethics Committee of Shahrekod University of Medical Sciences.

For each experiment, 40 male rats were divided into four groups of 10 rats. The control group received normal saline i.p and the other groups received Kombucha tea i.p at 250, 500, and 1000 mg/kg.

The tail-flick test was performed using the tail-flick apparatus by shaking the tail into thermal harmful stimuli through supraspinal centers. This experiment was carried out using a tail-flick apparatus (TF-5500, Borjsanat Co, Iran). The intensity of the light used was 10 (the degree on the device). The test duration was determined as 20 s. The light source was placed 2 cm away from the point of tail attached to the trunk, and the waving of the tail and pulling it from under the beam of light were considered the criteria of the response of the animal to the light. The animal was placed horizontally inside the restrainer and its tail was kept free (14).

The xylene test was used to investigate anti-inflammatory effects. To induce inflammation in the ears of rats, xylene purchased from Romil Co. was used. Thirty minutes after i.p injections, 0.03 mL of xylene was rubbed on the anterior and posterior sides of the right ear tulip and two hours later, the animal was killed. Then, both ears were removed and sections of both left and right ears were prepared using a puncher, weighed accurately, and the differences in weight between the left and right ear sections were measured. This difference in weight indicated the amount of inflammation, and the higher the difference in bone density, the greater the inflammation (15).

Statistical analysis was performed using SPSS version 22. One-way ANOVA was used to determine the significant differences between treatments and Tukey's test was used to compare the mean values. Data were expressed as mean ± standard deviation and P < 0.05 was considered the significance level.

According to one-way ANOVA and Tukey's test, the i.p injection of Kombucha tea at 250, 500, and 1000 mg/kg could significantly reduce the number of writhings compared to the control group (Figure. 1). 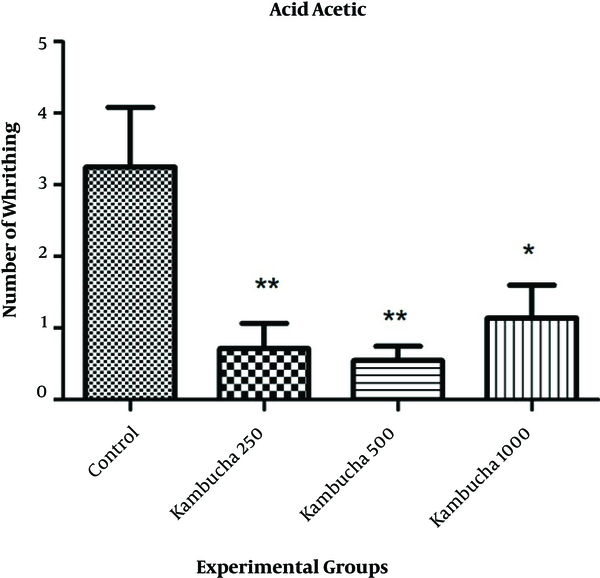 In addition, Kombucha tea at 1000 mg/kg significantly increased the tolerance to pain in the tail-flick test compared to the control group (Figure. 2). 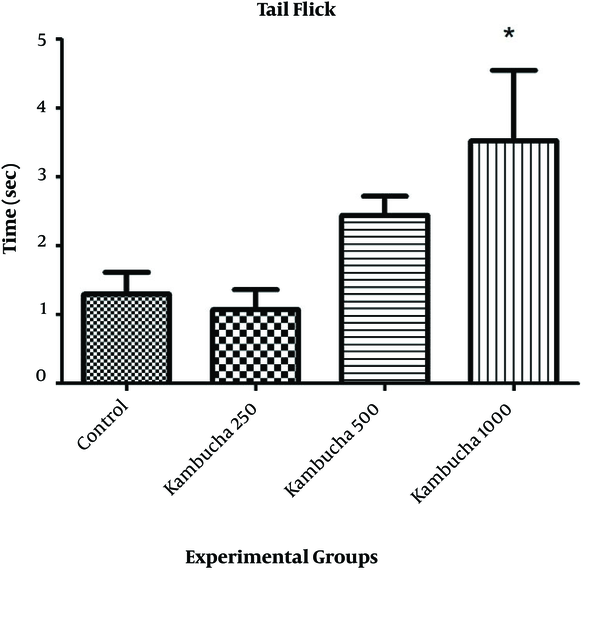 The effect of i.p injection of Kombucha tea on pain by tail-flick test. Comparison with the control group. * P <0.05. 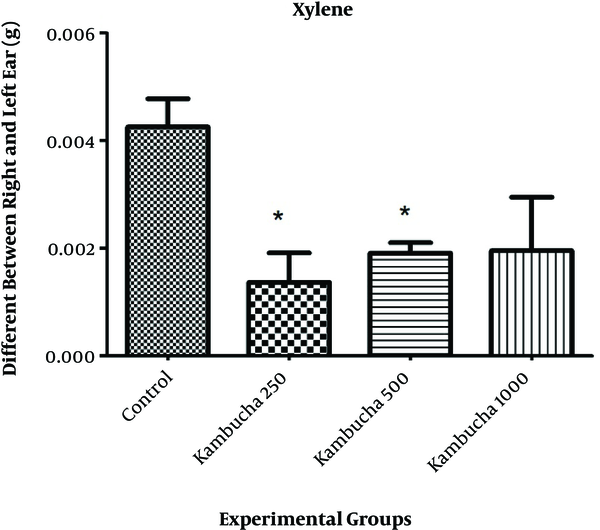 The effect of i.p injection of Kombucha tea on inflammation in acute anti-inflammatory effect test. Comparison with the control group. * P <0.05.

The response to the tail-flick test may predominantly reflect a spinally integrated nociceptive reflex thought to require the involvement of higher brain functions. Thus, based on the present results, it may be hypothesized that spinal rather than supraspinal mechanisms may account for the different effects induced by Kombucha tea in the tail-flick test. In this study, Kombucha, similar to morphine, a centrally acting analgesic, inhibited pain response in the tail-flick test. Therefore, Kombucha may have been able to exert its anti-nociceptive effect by acting on opiate-like receptors, especially μ-receptors (16). The intraperitoneal injection of acetic acid can cause acute inflammation of the peritoneum (16). In this model, it appears that the environmental effects of Kombucha are indirectly mediated by internal modifiers such as bradykinin, serotonin, histamine, and p-protein.

One of the most important causes of pain is the production of products due to oxidative stress, including anion superoxide, peroxynitrite, and hydrogen peroxide. Usually, oxidative stress is controlled by the endogenous antioxidant system, which includes enzymes and various substances such as superoxide dismutase, glutathione reductase, and glutathione. However, during the pain process, the oxidative stress increases, which decreases the ability of the endogenous antioxidants to fight it, and this imbalance results in damage due to oxidative stress and can increase pain. Therefore, preventing an increase in the production of products due to oxidative stress at the site of the pain or even in the spinal cord will reduce the amount of pain (16). Studies show that Kombucha is rich in antioxidants such as vitamins E and C, beta-carotene, and other carotenoids. This tea, as with black tea, contains polyphenols and other compounds with antioxidant properties, but since Kombucha is fermented, it is much more useful than ordinary black tea. Experts have found that the level of antioxidant activity in Kombucha is 100 times higher than that of vitamin C and 25 times higher than that of vitamin E. Therefore, its drinking helps treat chronic diseases due to oxidative stress (17). Kombucha also has anti-inflammatory effects and, unlike NSAIDs that lead to numerous side effects on the digestive system, effectively treats gastrointestinal ulcers and protects the gastric mucosa. Kombucha reduces gastric acid secretion that affects mucous membranes. Kombucha contains various amino acids, methylxanthines (caffeine, theophylline, and theobromine), and ascorbic acid, B vitamins (including folic acid B9), which are vital for the natural metabolism of the nervous system. These compounds help the nervous system in headaches and anxiety and prevent epileptic seizures (17). In animal models, it is demonstrated that the anti-inflammatory and antioxidant effects provided by the Kombucha tea can ameliorate the inflammation and oxidative stress in the pancreatic, hepatic, renal, and cardiac tissues of diabetic animals (18). An in vitro study showed that Kombucha tea reduced the ROS-induced apoptosis in murine hepatocytes probably due to its antioxidant activity (19). Kombucha tea relieved the immunosuppressive activity of chromium due to its antioxidant activity (11). In this study, Kombucha tea with a dose of 1000 mg/kg also reduced ear edema but was not statistically significant. This may be due to the acidic pH or alcoholic content of Kombucha tea (19).

Copyright © 2021, Zahedan Journal of Research in Medical Sciences. This is an open-access article distributed under the terms of the Creative Commons Attribution-NonCommercial 4.0 International License (http://creativecommons.org/licenses/by-nc/4.0/) which permits copy and redistribute the material just in noncommercial usages, provided the original work is properly cited.
download pdf 812.79 KB Get Permission (article level) Import into EndNote Import into BibTex
Number of Comments: 0