A Successful Pregnancy Outcome in a Heterotopic Abdominal Pregnancy: A Case Report 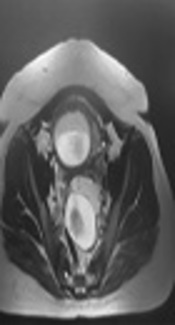 We reported a rare case of HAP in a 32-year-old woman (G2L1) with a history of 13 weak amenorrhea and mild pelvic pain presenting with two live fetuses in the 13th week. The patient also did not mention any risk factor of ectopic pregnancy such as pelvic inflammatory disease, assisted reproductive techniques, endometriosis, and multiparity. Diagnosis of HAP was performed with the use of sonography and magnetic resonance imaging. We managed the patient with emergency laparotomy due to acute abdominal pain a few hours after admission. Laparotomy revealed the rupture of the left fimbria with 500 cc hemoperitoneum. The excision of the ectopic gestational sac in the cul-de-sac and left salpingectomy with preserving the intrauterine fetus was performed. The patient finally gave birth to one live term birth.

Physicians should consider the possibility of HP in women with spontaneous pregnancy and abdominal pain. Both sonography and MRI should be performed to help timely diagnosis.

Heterotopic pregnancy is the implantation of at least two zygotes one in the uterine cavity and the other in ectopic places such as fallopian tubes, abdomen, spleen, cervix, broad ligament, or ovaries is called HP. The more and less common implantation sites of a HP are fallopian tubes (88.2%) and abdomen (2.7%) (1). Heterotopic pregnancy (HP) was a rare type of multifetal pregnancy in the past; however, it has become more common due to the increase of assisted reproduction techniques (1). The incidence of HP was reported about 1 in 30000 pregnancies (2) while the incidence of HP in a woman with assisted reproductive techniques (ART) increases to about 1% (3) or about 1 in 3900 pregnancies (4). Heterotopic abdominal pregnancy (HAP) is a rare diagnosis and a very few cases reported in the literature (5-8). We reported a rare case of HAP in a woman with two live fetuses in the 13th week of pregnancy.

A 32-year-old woman G2L1 was referred to our hospital with a history of 13 weak amenorrhea, nausea, vomiting, and mild pelvic pain. Her family planning method before deciding to pregnancy was the condom. At the admission time, she was anemic, but stable with a chief complaint of vague hypogastric pain and fever. There was mild hypogastric tenderness on physical examination and no bleeding on the vaginal exam. In the bimanual exam, we found an enlarged 13-weak uterus with mild tenderness in the left fornix. Laboratory findings were in normal ranges with hemoglobin = 10 mg. She was previously subjected to transvaginal sonography, which revealed a single alive 7-week embryo in the uterine cavity. After the admission, the sonography showed a heterotopic twin pregnancy with a gestational age of 13 w + 3 d; a live fetus was implanted in the uterine cavity and the other fetus in the abdominal cavity. The magnetic resonance imaging (MRI) confirmed the diagnosis and showed one sac in the uterus and another sac in the cul-de-sac (Figure 1). A few hours after being admitted, she suddenly presented with acute abdominal pain, nausea, and vomiting. She became moderately pale and sweating with heart rate = 104, blood pressure = 100/60, and hemoglobin = 9.7. Rebound tenderness was found in the abdominal examination. Emergency laparotomy was performed and the abdominal cavity was entered through a lower midline incision. There was 500 cc hemoperitoneum. Abdominal exploration showed a 13-week uterus with two normal ovaries and intact right tube. In the posterior cul-de-sac, there was a gestational sac with a live adherent fetus. Left tube was turned to the posterior side of the uterus and the fimbria was ruptured spontaneously. After bringing out the ectopic pregnancy product, salpingectomy of the left tube was performed and the bleeding area was sutured. We again explored the pelvic cavity for any conception remnant. One unit packed cell was transfused during the operation. After the operation, the fetal heartbeat of the intrauterine fetus was normal. Because of no wasting time, the patient was not in shock before laparotomy. After the operation, she was stable with hemoglobin = 8.5 and no uterine contraction was observed. A few days later, she was discharged with a good condition. Eventually, she delivered her 37-weeks child vaginally with unremarkable early postpartum events. We obtained written informed consent from the patient for publication of the present report. The HP is difficult to diagnose because of a visible live fetus in the uterus, which can distract the physician from the sac in the ectopic area. In other words, diagnosis of HP may be delayed and life-threatening complications such as the rupture of ectopic pregnancy and even death may happen. Our patient was missing for 6 weeks due to the existence of live fetus in the uterine cavity and limited usefulness of beta-hCG titration. Only after that we hospitalized the patient and performed an MRI, we reached the diagnosis of HP. The diagnosis of HP needs awareness and attention of an expert sonographer (11). Since ultrasound misses one-third of heterotopic pregnancy cases (12), MRI must be applied.

Physicians should be aware that different sites of implantation cause different signs and symptoms such as the acute abdomen, vaginal bleeding, abdominal pain, and bowel obstruction (10), which are not common in normal pregnancies. Our patient had mild pelvic pain, nausea, and vomiting at the time of admission. Another important aspect of these pregnancies is an increased risk for spontaneous abortion of the intrauterine fetus. The main principle during surgery is attention to maternal bleeding with caring of the intrauterine pregnancy and minimal manipulation of the uterus. The results of a review indicated that 66% of women with an HP developed the intrauterine pregnancy normally and delivered a live fetus at term (13). In our case, fortunately, the patient was hospitalized before the ectopic one caused severe bleeding so that we could do laparotomy and remove the abdominal sac soon after the patient complains of abdominal pain and other symptoms of shock and save the patient’s life as well as the intrauterine fetus.

There are several types of termination of an ectopic embryo or fetus in a heterotopic abdominal pregnancy such as surgical (14), medical (6, 15), and expectant management. In a retrospective study, aspiration of the ectopic gestational embryo had the best maternal outcome and the lowest abortion rate in comparison to the surgical management and expectant management (3). The choice could be different and depends on the implantation site, gestational age, and surgeon experiences (10). The goal of the surgical intervention is to remove the extrauterine pregnancy without injury to the normal intrauterine fetus (14), which we could achieve it. Yeh et al. managed a case of HAP with the selective use of potassium chloride, which changed the AP to a stable lithopedion (6). Nuno et al. reported a rare case of a HAP in which an advanced abdominal pregnancy was diagnosed after delivery of the intrauterine term pregnancy (5). Another similar case was reported by Ludwig et al. (8). It is still a question whether an abdominal pregnancy happens when fertilization of sperm and ovum occur primarily in the abdomen or it is a result of a silent rupture of a tubal pregnancy (16, 17) in which the conception is extruded from the uterine tube and secondarily implanted in the abdominal cavity (9). In our case, a secondary abdominal pregnancy is more likely. We postulated that a part of the placenta adhered to the fimbria and suddenly ruptured.

In conclusion, physicians should consider the possibility of HP in pregnant women with abdominal or pelvic pain and both sonography and MRI should be performed. In such a case, the bimanual examination should not be in the first line plan. If a bimanual examination is required to perform, it should be done cautiously and gently because it may lead to severe bleeding. In our case, this might happen and lead to acute abdominal bleeding.

Authors thank the patient for agreeing to publish this report.