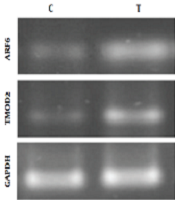 It has been well documented that exercise training (ET) induces beneficial effects on the central nervous system (CNS); however, the underlying mechanisms are less known. We presumed that actin cytoskeleton regulatory proteins such as ADP-ribosylation factors 6 (ARF6) and tropomodulin 2 (TMOD2) may be important elements of Exercise-Induced Neuroplasticity (EIN). We evaluated this hypothesis in the present study.

We randomly divided 12 male Wistar rats into control (C) and training (T) groups. The T group was exposed to six weeks of moderate-intensity treadmill running. The ARF6 and TMOD2 gene and protein expressions in the cerebellum of male Wistar rats were assessed by the real-time PCR and western blot analysis.

The results showed that TMOD2 and ARF6 gene and protein expressions were significantly higher in the T group than in the C group.

It seems that chronic treadmill running increases TMOD2 and ARF6 gene and protein expressions in the cerebellum and these changes probably lead to the improvement of brain function.

Actin filaments are major components of the neural cytoskeleton and play a key role in synaptogenesis (1) and neurotransmitter release (2), as well as the plasticity of the central nervous system (CNS) (3). A remarkable variety of proteins has been found to interact with actin cytoskeleton in the nervous system to work as actin polymerization-depolymerization (4). One of these actin regulatory proteins is ADP-ribosylation factor 6 (ARF6) (5) that is involved in the regulation of dendritic spine formation (6), axonal outgrowth, and dendritic arborization, probably through actin dynamics (7). In a few attempts to explore the physiological role of ARF6, it was demonstrated that the gene deletion of ARF6 in neurons can lead to defective myelination (5). Moreover, the full loss of ARF6 by ARF6 knockout (ARF6-KO) may cause embryonic lethality in mice (8). Another actin-regulatory protein is tropomodulin-2 (TMOD2) that is especially expressed in neuronal structures (9). It interacts with the pointed ends of actin filaments as a capping protein and is capable to directly bind G-actin to sequester or nucleate actin (10, 11). It is presumed that through actin dynamic, TMOD2 is related to the formation of new synaptic structures (12) and increased neurite extension (13). Also, the lack of TMOD2 expression might reduce sensorimotor gating and impair learning and memory (12)). On the other hand, the overexpression of TMOD2 may cause changes in both dendritic branching and spine morphology (14). These findings demonstrate that ARF6 and TMOD2 are important actin-binding proteins (ABPs) in the CNS and might be good candidates for neural plasticity. Neural plasticity improves the various aspects of CNS function through synaptogenesis, neurogenesis, and neuronal angiogenesis (15). However, the main underlying mechanism of action of neural plasticity has largely remained unknown.

Exercise training (ET) is an effective tool in neural plasticity, which has widespread adaptations on the anatomical and functional aspects of the CNS (16). ET has prominent effects on CNS function by increasing neurotrophic factors production, reducing oxidative stress, and improving neuroinflammation (17). However, the effects of ET on actin dynamics and its regulatory proteins such as ARF6 and TMOD2 are not clear. In our previous study, we demonstrated that cerebellar ARF6 gene expression was increased in diabetic rats and ET as a non-pharmacologic therapeutic intervention could damp this elevation (18). We concluded that ARF6 is an important mediator of stress-induced plasticity in the nervous system in response to ET and neurodegeneration disease. In another study, we observed that the protein levels of ARF6 in visceral adipose tissue of male Wistar rats were significantly higher in the group receiving high-intensity interval training and this elevation could be related to improved metabolism and glucose homeostasis (19).

We presumed that actin-binding proteins (ABPs) may be important elements of neural plasticity; but based on the authors’ knowledge, there was no research about the effect of various exercise training models on actin dynamics and its regulatory proteins. Therefore, the present study was the first attempt to investigate the effect of six-week submaximal ET on ARF6 and TMOD2 gene and protein levels in the cerebellum of male Wistar rats.

Twelve adult male Wistar rats (Razi Institute, Karaj, Iran), weighing 200 - 250 g, were housed three per cage and maintained at the animal lab of Tarbiat Modares University. The animals were kept in a climate-controlled room on a 12-hours light/dark cycle with food and water available ad libitum. The study followed all institutional and animal research health guidelines (as registered under code LUNS.REC.1395.170 at Lorestan University of Medical Sciences). The rats were randomly divided into the control (C, n = 6) and training (T, n = 6) groups.

The treadmill training protocol consisted of six weeks of submaximal endurance aerobic training (50% - 55% of maximal oxygen consumption) on a treadmill (Diagnostic and Research Instruments Co., Taoyuan, Taiwan). The treadmill training consisted of running at a speed of 10 m/min for 10 minutes in the first week. Then, the speed and duration of treadmill running gradually increased until the fifth week in which rats ran at a speed of 18 m/min for the 30 minutes. The training intensity and duration were kept constant in the sixth week for stabilizing the obtained adaptations (20).

Forty-eight hours after the last training session, animals (n = 3 in each group) were anesthetized through inhaling 2% halothane in a mixture of 30% O2 and 70% N2O (21) and cerebellar tissues were removed immediately and stored at -80°C until analysis.

Each reaction mixture of 20 µL contained 1 µL of total RNA-derived cDNAs, 1 µL of forward primer, 1 µL of reverse primer, 10 µL of SYBR Green PCR Mastermix (Applied Biosystems), and 7 µL of DEPC water. The PCR conditions were 50°C for 2 minutes, 95°C for 10 minutes, 40 cycles of 95°C for 15 seconds and 60°C for 1 minutes. The cDNA samples were run in triplicates and the cycle threshold (Ct) values were averaged for each sample. For each sample, the reference gene (GAPDH) and the target gene were amplified in the same run. The fold change of genes was measured by the 2-ΔΔCT formula (22).

For western blotting analysis, 25-50 µg of cerebellum lysate was prepared in lysis buffer (1% Triton X-100, 1% SDS, 50 mM Tris-Cl, pH 7.4, 500 mM NaCl, and 1 mM EDTA) and electrophoresed by 10% sodium dodecyl sulfate-polyacrylamide gel electrophoresis transferred to nitrocellulose membranes. Non-specific protein binding was blocked with 5% nonfat milk for 30 min and then incubated with a primary monoclonal antibody for 1 hours at 24°C, followed by four 15-minutes PBS washing rounds. The antibodies of TMOD2 (ab124833) and ARF6 (ab77581) were purchased from Abcam Biotechnology Company and diluted to 1:500. All the samples were subsequently probed with a dilution rate of 1:4000 of β-actin antibody (ab8229). After incubating with an anti-mouse horse-radish peroxidase-conjugated secondary antibody, TMOD2 and ARF6 digital images were acquired and quantified using densitometric scanning. The intensities of the bands were analyzed with ImageJ software. The band intensities of the TMOD2 and ARF6 proteins were normalized to the band intensity of β-actin (n= 3 for each group).

SPSS software (version 19, SPSS Inc., Chicago, IL, USA) was used for statistical analyses. Shapiro-Wilk and independent samples t-tests were used to verify data normality and differences between groups, respectively. The significance level was set at 5%, and the data were reported as means ± SEM.

4.1. The mRNA Levels of TMOD2 and ARF6 in the Cerebellum 4.2. TMOD2 and ARF6 Protein Levels in the Cerebellum

In order to evaluate the protein levels of TMOD2 and ARF6 in the rat’s cerebellum, the Western blotting analysis was employed. The results of Western blot analysis showed in response to ET, TMOD2 and ARF6 expressions were significantly higher in T group rats than in their counterpart controls (P = 0.018 and P = 0.010, respectively) (Figure 2). Evidence from human and animal studies demonstrate that ET is associated with CNS improvement and it has broad benefits for brain health (23). It is well documented that various types of ET have beneficial effects on learning and memory (24), neural damage (25), and depression (26). In the molecular aspect, ET increases neural plasticity by directly affecting the neural structure and potentiating synaptic strength (27), neurogenesis (28), vascular function, lipid metabolism, protein synthesis, molecular transport, and inflammatory/immune responses (29). ET also initiates the expression of neurotrophin genes such as brain-derived neurotrophic factor (BDNF) (30). In line with these observations, in the present study, it was observed that six-week submaximal ET increased TMOD2 and ARF6 gene and protein expressions in the cerebellum of male Wistar rats. This elevation probably was related to the enhancement of actin cytoskeleton dynamics. Actin cytoskeleton dynamics is critical for neural plasticity and is mediated by various ABPs such as TMOD2 and ARF6. TMOD2 is the neuronal isoform of tropomodulin that strongly regulates actin cytoskeleton (31). TMOD2 has dramatic effects on neuritogenesis, synaptic plasticity, neurite formation (32), and neuronal development (22). The lack of TMOD2 has been associated with the impairment of actin cytoskeleton dynamics and many cellular processes (12). For example, Cox et al. reported that TMOD2 knock-out in mice was related to severe impairment of the fear-based learning task (12). Yang et al. investigated TMOD2 expression in the hippocampal tissue of patients with mesial temporal lobe epilepsy and reported that the protein levels of TMOD2 suffered a down-regulation compared to control tissue. Gray et al. explored the modulating effects of TMOD2 on the morphology of nervous system by using L29E/L134D mutations of TMOD2 overexpression (14). They observed that TMOD2 overexpression was related to the increased number of dendrites spines and length, without changing the average length of dendritic branches. They concluded that upregulation of TMOD2 may be a mechanism by which the CNS increases its dendritic arborization and TMOD2 might be a positive regulator of dendritic arbor complexity.

ARF6 is a key intracellular trafficking regulator for endocytosis, exocytosis, endosomal recycling, and cytokinesis through the reorganization of the actin cytoskeleton (33). ARF6 plays substantial roles in axonal outgrowth, dendritic branching, and spine formation (5) and may be related to disorders such as memory impairment and mental disorder (34). However, these reports were attained from in vitro surveys and there are a few in vivo examinations about the physiological role of this protein in the CNS. It has been reported that in Schwann cells, ARF6 knockdown harnesses Schwan cells migration (35). Also, Akiyama et al. examined the deletion of ARF6 gene from neurons and reported that ARF6 is important in neuronal development of myelination (5). These findings demonstrated that TMOD2 and ARF6 are key elements in CNS function and their abnormal expression can cause several disturbances in brain health. Considering the importance of TMOD2 and ARF6 in normal functioning of the CNS and the beneficial effect of ET on brain health, it seems that the increased expression of TMOD2 and ARF6 following ET is related to the enhancement of cytoskeletal integrity, morphogenesis, synaptogenesis, and synaptic plasticity (3). In line with these assumptions, Chao et al. demonstrated that running exercise could protect against myelin sheath degeneration in mice with Alzheimer’s disease (AD) (36). In addition, Ambrogini et al. showed that physical exercise-induced synaptogenesis in adult-generated neurons in the rat dentate gyrus (37). Also, Toy et al. reported that treadmill exercise with high intensity increased dendritic spine density in the striatum (38). Besides, although ET was able to increase gene and protein expressions of ARF6 and TMOD2, its underlying mechanism is still unclear. Therefore, the investigation of this effect is suggested in future studies.

In the present study, we observed that chronic ET increased TMOD2 and ARF6 gene and protein expressions in the cerebellum of male Wistar rats. This change is probably attributed to the elevation of brain function, but its underlying mechanism is not understood yet.