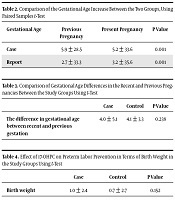 The risk of preterm labor is significantly higher in women with a history of preterm delivery.

The current study aimed at investigating the effect of 17 α-hydroxyprogesterone caproate (17-OHPC) on preterm labor prevention in pregnant women with a history of preterm labor.

In the current randomized control trial, 100 pregnant women with a history of preterm labor were divided in two groups. The 17-OHPC 250 mg was prescribed to the case group from the week 20 of gestation weekly. Sampling was done randomly. The gestational age at birth was measured up and compared with that of previous labor. Data were analyzed using t-test.

The results of the study indicated that although gestational age at birth was higher in the case group than in the control group, the difference was not statistically significant.

Preterm labor is defined as the birth before 37 weeks of gestation, with a prevalence of 6% - 12% in the developed countries and higher prevalence in the developing countries. Preterm labor is considered as one of the main causes of prenatal and neonatal mortality (1-3). The chance of survival among premature neonates increases with increasing gestational age at birth. In addition to the death issue, the premature baby is also at risk for physical and mental disorders, and there is a great problem of expenses to take care of such babies in the intensive care units (4-6). One of the most important risk factors is the history of preterm delivery, which increases the risk of next preterm labor (7). A lot of researches are performed on prevention of early onset of labor pain. Progesterone is thought to be involved in maintaining the zero stage of labor. Progesterone can increase the oxytocin breakdown and prevent increase of oxytocin receptors in myometrium. It seems that estrogen and progesterone act as components of a biomolecular system that that completes zero stage of labor (8). Progesterone, as one of the hormones secreted by the placenta, is essential for pregnancy. Today, support of luteal phase in ovulation induction cycles and intrauterine insemination is mostly done by progesterone products that increase pregnancy chance and reduce the risk of abortion (9). Progesterone can be administered intramuscularly or vaginally (10). However, there is a controversy about the best type of progesterone in various studies (11). Some suggests a long-term progesterone as an alternative. The 17 alpha-hydroxyprogesterone caproate (17-OHPC) is a progesterone derivative that caproic acid has prolonged its effect (12). This combination is suggested for the treatment of recurrent abortions and prevention from preterm delivery without teratogenic effects (13, 14).

Treatment with 17-OHPC reduces the risk of preterm labor up to 30% in singleton pregnancies. Although this treatment is not effective in twin and triplet pregnancies (15), some studies also report similar results (16, 17). In a study, the preterm labor rate decreased significantly using 17-OHPC (16). Similarly, in another study, the risk of preterm labor significantly reduced in 142 pregnant women who were at risk for preterm labor following the vaginal administration of 100 mg progesterone daily (17). The American College of Obstetricians and Gynecologists has also suggested the use of 17-OHPC to prevent preterm labor (18). Some older studies show controversial results in evaluating the effect of 17-OHPC on preterm delivery prevention (19).

The current randomized clinical trial was performed on 100 pregnant women (reference 21) of gravida ≥ II with a history of preterm labor referring to the Perinatology Clinic of Ali ibn Abitalib Hospital in Zahedan, Iran. The present study protocol was approved by the Ethics Committee of Zahedan University of Medical Sciences; all patients were provided with adequate explanations and informed consent was also obtained from them before entering the study.

The inclusion criteria of the study were: lack of symptoms of amniotic fluid leakage, uterine contractions, preeclampsia, vaginal bleeding, and fetal anomalies, no history of cardiovascular disease, diabetes, and uterine abnormalities, and no smoking.

The study was performed by the unpredictable (accessible) method. Based on the literature review (reference of 21), 100 subjects were needed for the study. Each group consisted of 50 subjects enrolled randomly. At first, demographic information of the patients was recorded in checklist. All the subjects signed the informed consent form before entering the research. The 17-OHPC has no side effects on pregnancy. Pregnant women with a history of preterm labor referring to the Perinatology Clinic of Ali ibn Abitalib Hospital were randomly assigned to two groups (random allocation method). Bothe the groups were matched for the conditions of pregnant women.

For 50 pregnant women in the case group, from the 20th week of gestation, 250 mg of 17-OHPC was injected weekly; the muscular injections were performed up to the end of the 36 weeks of gestation, or until delivery. For 50 patients in the control group, pregnant women were followed up without 17-OHPC injection until the end of 36 weeks of gestation. After the completion of follow-up, the gestational age at birth, the birth weight of infants, and their need for NICU (the neonatal intensive care unit) admission in the two groups were compared. These comparisons were performed using SPSS software version 16. To express the quantitative data, the central indicators (mean, etc.) and dispersion (standard deviation, etc.) were used. The percentages were used to describe the qualitative variables. Tables and charts were used to provide better results. In case of normal distribution of data, independent samples t-test was used to compare the quantitative variables between the two groups. The normal distribution of data was measured by the Kolmogorov-Smirnov test. Chi-square test was used to compare the qualitative variables of the two groups. The significance level was considered less than 0.05 in all cases.

Table 1. Comparison of the Mean Age of Subjects in the Two Groups Using t-Test

Table 5. The Effect of 17-OHPC on Preterm Labor Prevention Based on the Need for NICU Admission in the Two Groups Using Chi-Square Test

In the current study, from the 20th week of gestation, 250 mg of 17-OHPC was weekly administered intramuscularly to the subjects in the case group. Progesterone can increase the oxytocin breakdown and prevent increase of oxytocin receptors in myometrium. The results of the study showed that the increase in gestational age at birth in the 17-OHPC group was higher than in the control group, but the difference was not statistically significant. In the study by Winer et al., from France, the effect of 17-OHPC was studied on 105 women in both the case and control groups; the results showed that 17-OHPC could not prolong the duration of pregnancy in the singleton pregnant women who were at high risk for preterm labor (20). In the study by Awwad et al., from Lebanon, there was no significant difference in the gestational age at birth between the two groups, which is consistent with the results of the current study, but the birth weight was higher in the case group; therefore, the number of infants with low birth weight in the case group was significantly lower than in the control group (7.6% vs. 14.3%) (21). In the current study, contrary to the study by Awwad et al., there was no significant difference in birth weight between the two groups. In the study by Caritis et al., from the United States, a sample of 315 women with the history of preterm labor between 25 - 28 weeks of gestation was assessed; women with lower 17-OHPC levels were significantly at higher risk for spontaneous preterm labor compared to the ones with a high 17-OHPC level. As a result, lower plasma levels of 17-OHPC were associated with increased risk of spontaneous preterm labor (22).

According to the study by Nigar et al., the prevalence of preterm delivery was 6.9% in India; the mean gestational age at birth in the 17-OHPC receivers and controls were 36 weeks and 33 weeks plus five days respectively; the gestational age at birth was significantly higher in the case group than in the control group, (23) which is inconsistent with the current study results.

In general, treatment with 17-OHPC could increase the gestational age at birth in women with a history of preterm labor. The study limitations were the small sample size and the study duration; therefore, further researches are needed in this regard.

The current study findings suggest that although the increase in gestational age in the 17-OHPC group was higher than that of the control group, the difference was not statistically significant.

The paper was derived from a Ph.D. dissertation approved by the Ethics Committee of Zahedan University of Medical Sciences in 2014 (ethical code: IR.ZAUMS.REC.1393.6184). The authors hereby acknowledge their gratitude to all the professors, colleagues, and patients who helped them with the project.

Copyright © 2019, Zahedan Journal of Research in Medical Sciences. This is an open-access article distributed under the terms of the Creative Commons Attribution-NonCommercial 4.0 International License (http://creativecommons.org/licenses/by-nc/4.0/) which permits copy and redistribute the material just in noncommercial usages, provided the original work is properly cited.
download pdf 133.62 KB Get Permission (article level) Import into EndNote Import into BibTex
Number of Comments: 0