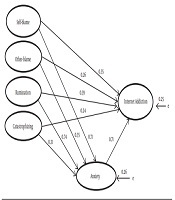 Internet addiction is one of the most paramount problems of societies. Therefore, the knowledge of its influencing factors is of special importance.

The present study was correlational in terms of goals and descriptive in terms of the data gathering procedure. The statistical population consisted of 2,000 male students and included all fourth-grade students of state high schools of Tabriz City in 2017. The sample included 246 students, selected through random cluster sampling. For the collection of data, the Cognitive Emotion Regulation questionnaire (CERQ), Young’s Diagnostic questionnaire (YDQ), and Beck Anxiety Inventory (BAI) were used. Then, the collected data were analyzed by structural equation modeling.

The findings have practical implications for clinical psychologists and can be used for diagnosis and therapy of internet addiction disorder.

While extreme internet addicts use the internet for movies, music, cartoon, internet games, social sites, sex chats, and pornography, normal users use it for news, shopping, booking, and education. Also, internet addicts use it with no aim and in private (5). The study of related literature shows that some internet addicts behave in the same way as drug addicts, alcoholics, and compulsive gamblers, and this leads to failure in education, job dysfunction, marital dissatisfaction, and divorce (6). Regarding internet addiction and other psychological variables, the results of the studies demonstrate that internet addiction is positively related to shyness, loneliness, anxiety, depression, and suicidal ideations. On the other hand, internet addicts usually possess characteristics such as agitation, anxiety, craving, depression, hostility, drug abuse, rumination, withdrawal, loss of control, and decision-making ability (7, 8). Moreover, problematic or pathological users of the internet are in an excessive mental activity about the internet and think that it is necessary to use the internet in an enhanced amount to get the pleasure they want and evade problems and negative feelings such as despair, guilt, exhaustion, and worry (9, 10). Like drug and alcohol addicts, internet addicts behave in such a way that it leads to failures in education and job performance, disputes in marital affairs, and finally, divorce (11, 12).

One of the main approaches concerning the etiology of psychological disorders, including addiction, is cognitive emotion regulation strategies. The findings indicate that of the nine cognitive emotion regulation strategies, four negative strategies including self-blame, other-blame, rumination, and catastrophizing have the most relationship with psychological disorders such as major depression, bipolar disorder, anxiety, eating disorders, borderline personality disorder, drug addiction, and internet addiction (13-15).

Self-blame occurs when you blame yourself for what you have done. Other-blame occurs when you blame others for what you have gone through. Rumination refers to thinking all the time about the feelings and thoughts related to a negative event. Catastrophizing refers to emphasizing the terror of the experience (16). A few studies have shown that all of these negative cognitive emotion regulation strategies are related to psychopathologies such as depression, anxiety, drug abuse, and behavioral addictions, including internet addiction (17). In addition, researchers have shown that anxiety is always associated positively with negative cognitive emotion regulation strategies (17, 18).

The present study aimed to answer the main question “whether there is any relationship between negative cognitive emotion regulation strategies and the symptoms of internet addiction via the mediation of anxiety” and if so, “what is the contribution of these variables to predicting internet addiction”.

The present study was correlational in terms of goals and descriptive in terms of the data gathering procedure. Taking into account the goals of the study, the statistical population consisted of 2,000 male students and included all grade 4 students of state high schools of Tabriz City in 2017. Considering Tabachnick and Fidel (19), 246 students were selected as the sample. A cluster random sampling method was used to select the sample. First, from the five educational zones, three zones were selected randomly, and then, six high schools from these zones were randomly selected. From the selected high schools, three classes were randomly selected, and all the students of these classes were considered as the final sample. For the analysis of collected data, descriptive statistics (mean and standard deviation) and inferential statistics (structural equation modeling) under LISREL (linear structural relations) software were used.

The Cognitive Emotion Regulation questionnaire (CERQ) was used (20) to measure the particular cognitive emotion regulation strategies used by participants in response to the experience of fearful or worrisome life events. Developed in 1999, the CERQ was based on both theory and experiment and was the first inventory that measured self-regulation and conscious cognitive elements of emotion regulation.

The CERQ consists of 36 items, dealing with nine separate subscales based on different concepts. Each subscale contains four items, and each is related to what the person thinks after the experience of fearful or worrisome life events. Self-blame means blaming yourself for what you have done or experienced. Other-blame refers to blaming the environment or another person for actions that may be your failures. Rumination or focus on thought refers to pondering about negative events and experiences. Catastrophizing refers to emphasizing the horror of what you have done. Putting into perspective means putting aside the importance of the happening and signifying the pertinence when considering it concerning other events. Positive Refocusing refers to the reflecting on pleasurable and delightful topics and ignoring the real event. Positive reappraisal refers to thinking positively about the experience regarding the growth of the person. Acceptance refers to the reflection of consenting to what you have done and yielding yourself to what has occurred. Refocus on planning refers to reflection on what course to take and how to manage the negative circumstances (16).

Cognitive emotion regulation strategies were assessed on a five-point Likert scale ranging from 1 (never) to 5 (always). Each subscale consists of four items. Specific subscale scores were attained by summing the scores belonging to the particular subscale or cognitive emotion regulation strategy (ranging from 4 to 20). A higher subscale score indicated more use of a specific cognitive strategy.

The study of cognitive emotion regulation strategies has indicated that all the subscales are internally consistent. Alpha reliabilities ranging from 0.70 to 0.80 have been reported for this questionnaire (16). In Iranian culture, Alpha reliability of 0.82 has been reported for the cognitive emotion regulation questionnaire (21).

Young (2) developed Young’s Diagnostic questionnaire (YDQ) to measure Internet addiction disorder (IAD). Young’s Internet Addiction scale involves the following features. It is a questionnaire consisting of 20 items, which should be answered on a five-point Likert scale. It is an indication of the amount of internet use that affects the user’s daily activities, social life, productivity, sleeping pattern, and feelings. The least possible score is 20 and the most possible is 100; higher scores indicate the more severity of problematic internet use. Young (2) claims that a score of 20 - 39 shows average usage, a score of 40 - 69 indicates persistent difficulties, and a score of 70 - 100 signifies major difficulties. Widyanto and Griffiths (4) carried out the most exhaustive study of the psychometric features of YDQ, in which the factor analysis of YDQ showed six factors explaining 68% of the variance, including salience, anticipation, lack of control, neglecting work, excessive use, and ignoring social life. These factors indicated excellent internal consistency and concurrent validity and salience and had very high reliability, i.e. 0.82. These six factors had an excellent correlation with one another, varying from r = 0.226 to r = 0.62. Young’s Diagnostic questionnaire (YDQ) has been standardized among the Iranian community (22). Alpha coefficient was found to be 0.89. Also, it had a high aggregate validity coefficient and construct validity, which was based on convergent validity. On the whole, the Persian version of YDQ demonstrates satisfactory psychometric features among Iranian populations.

Table 1. Descriptive Statistics (Mean and Standard Deviation) of the Variables (N = 246)a

Table 2. Covariance Matrix of the Variables of the Study

The fitness indices of the measurement model are shown in Table 3. As can be seen in Table 3, the measured model had good fitness regarding the theoretical model. Therefore, negative cognitive emotion regulation strategies could explain the variance of internet addiction via the mediation of anxiety.

The Bootstrap test was used to study the indirect effect of negative cognitive emotion regulation strategies on the variance of internet addiction. As demonstrated in Table 5, self-blame and rumination predicted the symptoms of internet addiction via the mediation of anxiety, whereas other-blame and catastrophizing did not.

The purpose of this study was to examine the structural relationships between negative cognitive emotion regulation strategies (self-blame, other-blame, rumination, and catastrophizing) and the symptoms of internet addiction via the mediation of anxiety. The findings of structural equation modeling demonstrated that negative cognitive emotion regulation strategies were positively related to anxiety. This finding is consistent with the findings of previous research (16, 17). Moreover, the results of the present study showed positive and strong relationships between anxiety and internet addiction. This finding is consistent with the findings of other studies (8). Researchers claim that people who lack social skills or who experience social anxiety face difficulties in satisfying their needs, such as sexual needs, belonging needs, and self-actualization needs (25).

To explain the findings of the study, we can also say that emotional experiences due to interpersonal interactions and life events are continuously accumulated and seek a passage to be discharged. In this process, the intervention of cognitive emotion regulation strategies can effectively make use of these emotions to ease and enhance adaptive behaviors (13, 14, 17). However, in regulating these emotions, instead of directing his/her emotions towards useful goals, the person begins to think and behave maladaptively (rumination, catastrophizing, self-blame, and other-blame) regarding these emotions and the related events so that these maladaptive thoughts and behaviors turn into a stable style (13, 21) or the person may segregate the content of the experiences from the context of the events and concentrate on their exaggerated consequences; hence, he/she becomes unable to control emotions produced by these thoughts (13, 17). In these circumstances, to get rid of or suppress ruminations, catastrophes, self-blame, and other-blame, which all are interconnected with anxiety (13, 18), the person tries helplessly to reduce anxiety and get free from emotions arisen from the maladaptive thoughts. Meanwhile, connection to the internet and immersion in unlimited information sources and space can allay the person involved in the experiences of negative emotions (9, 14, 15).

This positive consequence as an operant conditioning process leads to internet addiction. Because the internet space as a negative reinforcement inhibits negative cognitive emotion regulation strategies, i.e. rumination, catastrophe, self-blame, and other-blame, the person turns into internet misuse whenever he/she comes into contact with similar situations and emotions (6, 7).

Copyright © 2020, Zahedan Journal of Research in Medical Sciences. This is an open-access article distributed under the terms of the Creative Commons Attribution-NonCommercial 4.0 International License (http://creativecommons.org/licenses/by-nc/4.0/) which permits copy and redistribute the material just in noncommercial usages, provided the original work is properly cited.
COMMENTS