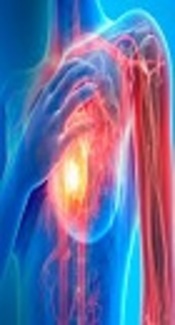 There are many strategies to cure cancer, therefore, many drugs have been evaluated in this field. Albendazole (ABZ), derivative of benzimidazole, has a wide range of anti human and animal worm effects. The anti tumor effect of ABZ in both animal and human clinical trials has been reported.

In the present study, the cytotoxic effect of ABZ on breast cancer cell lines, MDA-MB-231 and MCF7, and on the melanoma cell line, B16F10, were evaluated with MTT assay for the first time.

Different doses of ABZ for two breast cancer cell lines and the melanoma cell line were investigated. ANOVA was employed to analyze the data. Mean comparisons were carried out by Dunnett’s test in SPSS (version 18.0) statistical software.

According to the cytotoxic effects of ABZ on breast cancer and melanoma cells, it can be used as a promising adjuvant along with other chemotherapy drugs.

Cancer is not a new disease and since past years so many people have been afflicted and died due to cancer; it is the second leading cause of worldwide mortality after cardiovascular diseases. In addition, the number of cancer patients is rising. Hence, this disease is an absolutely serious threat for all human societies (1). Unfortunately, cancer is a very diverse disease in the terms of organ, tumor, and cell. This diversity is the most important challenge facing specific detection of cancer and as consequence, seriously affects specific and proper treatment of that (2, 3).

The cancerous cells do not follow the normal processes of cell proliferation; divide and proliferate abnormally and devastate healthy organs and tissues. The exact reason of this phenomenon is not clear, however, many factors such as genetic, viruses, and toxic chemicals are involved (4). Cancer grows normally as a result of uncontrolled cell cycle and incomplete apoptosis due to the proto-oncogenes activating and the tumor suppressor genes (TSG) inactivating (5).

There are many strategies to cure cancer such as surgery, gene therapy, hormone therapy, radio therapy, angiogenesis suppressing, and chemotherapy (6). During the recent years, a large number of natural and synthetic agents have been developed and assessed for discovering a proper candidate for chemotherapy process (7).

Previous studies have showed that albendazole (ABZ) is a safe and effective anti parasite drug. Interestingly, it has been indicated that this compound has significant anti-tumor activity on the hepatocytes of liver cancer (8). During the recent years, many new anti-tumor aspects of ABZ have been discovered. These discoveries have shown that rather than the local effect, ABZ probably also has systemic anti-tumor activity (9). In some researches, ABZ like paclitaxel is considered to be toxic for cancerous cells (10). It has been demonstrated that ABZ has strong potential to suppress cell growth of peritoneal tumors with origin of the human long intestine. It is supposed that this anti-tumor activity of ABZ is mediated through the G2/M phase of the cell cycle (11).

According to previous studies, treatment of the lung cancer cells (SCLC) for 72 hours with ABZ (500 mM) resulted in tumor growth suppress between 30.3% - 5.9%. Treatment with higher ABZ concentrations than 500 mM had no anti-cell growth effect. The results also showed that treatment of the tumor cells with ABZ (500 mM) leads to reducing the number of cells in the G2/M phase of the cell cycle (12).

In the present study, we evaluated the cytotoxic effects of different ABZ concentrations on two cultured human breast cell lines (MCF7 and MDA) and a melonoma cell line (B16F10).

ABZ (Sigma Aldrich, USA) was solved in DMSO with total concentration of 0.01% V/V, afterwards it was mixed with the specific medium culture of each cell line.

Two cell lines of breast cancer, MDA-MB-231 (Endoplasmic Reticulum negative) and MCF-7, and a cell line of melanoma (B16F10) were purchased from the Iran National Cell Bank located in Pasteur Institute (Tehran, Iran). All the cell cultures ingredients were obtained from Gibco company, USA. All cell lines were cultured in PBS (phosphate buffered saline) and DMEM (Dulbecco’s Modified Eagle’s Medium) containing 1% antibiotic (penicillin 100 unit/mL, streptomycin 100 unit/mL), respectively. In addition, the mediums were mixed with FBS until three passages before starting the MTT test. The cells were cultured at 5 × 104 cells/mL in each well. Cells were cultured in 37 centigrade and 5% CO2.

The cells (5 × 104 cells/mL) were cultured in 96-well plate and incubated at 37°C with 5% CO2 for 24 hours. After this time, different doses of ABZ for two breast cancer cell lines (0.1, 1, 10, 100 µM) and the melanoma cell line (1, 10, 100 µM) were investigated (9). In addition, 20 µL DMSO mixing with 180 µL cell suspension and cell suspension solely was used as negative and positive controls, respectively. The micro- plates were then incubated for another 24 hours in the same condition. In the next step, the upper liquid was removed followed by adding 20 µL MTT solution

and 200 µL specific medium of each cell line to wells. The micro-plates were then incubated for an extra three hours. Finally, after decanting the supernatants, 150 µL DMSO was added to wells for solving insoluble blue formazan. The metabolic activity of each well was evaluated by the colorimetric method and using the MTT dye. The content of micro-plates was determined by ELISA in 570 nm. Each concentration of ABZ for different cell lines and MTT assay was repeated three times. The percent of viability of cells was determined and compared to control groups by the formula 1. 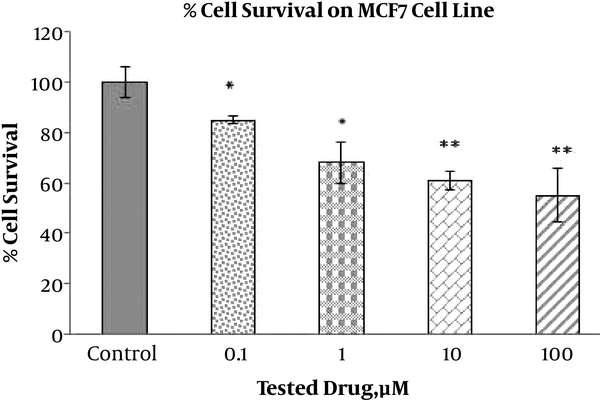 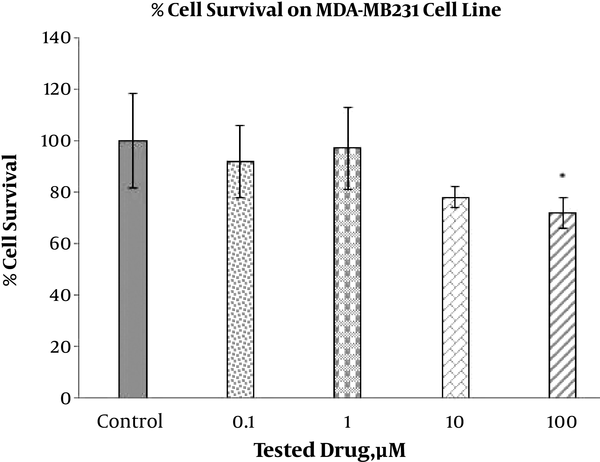 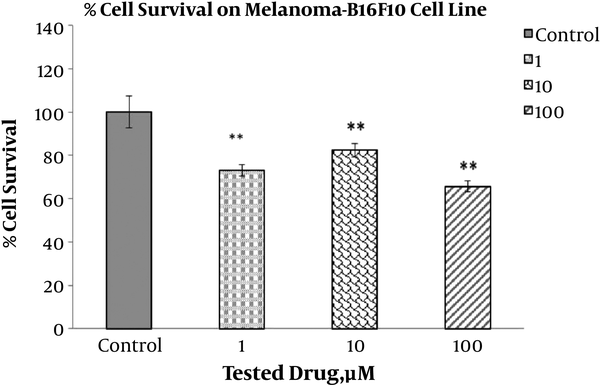 In the present study, the cytotoxic effect of ABZ on breast cancer cell lines, MDA-MB-231 and MCF7, and on the melanoma cell line, B16F10, was evaluated for the first time. With regards to the former studies concerning the anti-tumor effect of ABZ, the chosen doses for two breast cancer cell lines (0.1, 1, 10 and 100 µM) and for the melanoma cell line (1, 10 and 100 µM) were investigated after 24 hours of treatment (13).

ABZ, derivative of benzimidazole, has a wide range of anti human and animal worms effects. The anti-tumor effect of ABZ in both animal and human clinical trials has been reported (11, 14). It is indicated that ABZ has much more anti-tumor effects than other metabolites, probably due to its more lipophilic properties (15).

Results of the present study show that ABZ significantly reduced viability of the MCF7, B16F10, and MDA-MD231 cells. Additionally, toxicity effect of ABZ is increased by rising ABZ concentration.

The effect of ABZ on many cancers such as the long intestine cancer has already been reported. The study conducted by Pourgholami et al. (13), showed that ABZ strongly suppresses growth of the cancer hepatocyte cells in both in vitro and in vivo. Their results indicated that the ABZ inhibitory effect is apparent at concentrations of 100 and 1000 nM, therefore, it resulted in nearly 80% reduction in the in vitro growth cell compared to the control group, explaining similar results with the present study (13, 16).

In a clinical study aiming in determining the maximum bearable oral dose of ABZ in patients with advanced cancer, it was indicated that ABZ is quite bearable. The maximum bearable dose of ABZ to suppressing the bone marrow cancer cells was 400.2 mg per day, which resulted in a minimum of 50% fall in the tumor marker base levels in 4 patients out of 24 tested patients (17).

Large number of clinical studies on ABZ in the world convinced the researcher to cast many benefits on ABZ. As our results in both MCF7 and B16F10 breast cancer cell lines confirmed that ABZ has anti-tumor activity even in low levels, reducing the dose or postponing the resistance to drug has been implemented in order to increase the efficacy of combination therapy as the most important approach in the treatment of a variety of malignancies (18). Based in this consideration, the anti-tumor effect of ABZ in low doses in combination with 2-methoxyestradiol (2ME) on the cancer cells was examined. They used doses 5 and 10 µM of ABZ and reported that the low doses of ABZ in combination with 2-methoxyestradiol (2ME) has synergetic anti-tumor effect (19). Furthermore, it has been determined that the paclitaxel-resistant cell lines are sensitive to ABZ, indicating action mechanism of ABZ probably through disruption in tubulin formation (20, 21).

Currently, studies are magnificently increasing for discovering new anti-tumor agents with potential to make the tumor cells sensitive to therapy. Resistance of the cancer cells to the chemotherapy drugs leads to decrease the response level of these cells to drugs and as consequence, the therapeutic efforts fail. Therefore, more investigations for developments of new and efficient anti-angiogenesis and anti-tumor drugs are required (22). With regards to rising resistance of tumors to the common treatments, discovering new anti-tumor agents for successful treatments of cancers is important. Additionally, with regards to numerous anti-tumor mechanism of ABZ, it can practically be used in combination with the other anti-cancer drugs.

Our results are in accordance with observations made by previous studies suggesting that ABZ has cytotoxic effect. In the MCF7 cell line, treatment with all four concentrations of ABZ led to significant reduction in viability of the cells, while this response to ABZ treatment by the MDA-MB231 cell line was only significant at one ABZ concentration. Furthermore, the viability of the B16F10 cells was significantly decreased by all three tested concentrations of ABZ. In conclusion, according to the cytotoxic effects of ABZ on the breast cancer and melanoma cells, it can be used as a promising adjuvant along with other chemotherapy drugs.

The authors would like to thank and acknowledge Mr. Yasin Pourfarjam for his effort and contribution. They would also like to thank the Physiology Research Center of Medical Sciences for providing us with the space and equipment for this research.

Copyright © 2018, Zahedan Journal of Research in Medical Sciences. This is an open-access article distributed under the terms of the Creative Commons Attribution-NonCommercial 4.0 International License (http://creativecommons.org/licenses/by-nc/4.0/) which permits copy and redistribute the material just in noncommercial usages, provided the original work is properly cited
download pdf 262.20 KB Abstract XML Get Permission (article level) Import into EndNote Import into BibTex
Number of Comments: 0