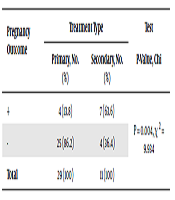 Hysterosalpingography (HSG) is a common diagnostic method that has therapeutic effects on fertility success.

The purpose of this study was to investigate the effect of HSG on the biochemical pregnancy rate of women with primary and secondary infertility in patients referring to Ali-ibn Abitalib Hospital in Zahedan.

A descriptive-analytical study was performed on 100 women with primary and secondary infertility referred to Ali-ibn Abitalib Hospital of Zahedan for performing HSG. Following performing the examinations, initial tests, and procedures, as well as ruling out acute pelvic infection by the expert gynecologist, the patients were referred to the radiologist for HSG. All patients in the study underwent HSG. Data were analyzed by SPSS version 21 software.

The use of HSG as a therapeutic approach is not effective, but it could have therapeutic effects as a diagnostic method in women with early infertility.

One of the treatment methods for infertile women is the use of ovulation induction, and new treatments, commonly as ART, have raised hopes for many infertile couples. Ovulation induction is the most common method of treating infertility in which ovaries are stimulated to produce multiple follicles (6). Ovulation induction is a widespread method for treating infertility not only for women with ovarian disorders such as amenorrhea or ovulation but also for infertile couples with blocked fallopian tubes, low sperm count, defective sperm, unexplained infertility, and other factors (7, 8).

A descriptive-analytical study was done in 2016 under ethical code IR.ZAUMS.REC.1395.55. The study population in this study included women with primary or secondary infertility who referred to the Gynecology and Radiologic Clinic of Ali-ibn Abitalib Hospital from February to Aguste 2016. The minimum sample size was 100. The inclusion criteria for the study included a definitive diagnosis of infertility and informed consent for participation in research. The exclusion criteria included any abnormalities of the uterus, hydrosalpinx, not flushing of the contrast material, and the absence of the uterine (obstruction of the internal or external os of the cervix).

In the present study, data were gathered in 12 items, including the results of HSG, the outcome of pregnancy, and the type of pregnancy (spontaneous or induced). After confirming the validity and reliability of data collection tools and obtaining informed consent, the researcher selected the participants using a convenience sampling method.

After performing the examinations, initial tests, and procedures, as well as the R/O of acute pelvic infection disease by expert gynecologists, the patient was referred to a radiologist for HSG. All patients in this study underwent HSG, including those who received ovulation induction and those who did not receive any special treatment for infertility. Data were analyzed by SPSS version 21 software after collection and coding. Descriptive statistics such as frequency, mean, standard deviation, minimum, and maximum were used for quantitative variables, and the Levene test was used for the equality of variances. The chi-square tests, Fisher exact test, and independent T-test were used to determine the relationship between variables. The significance level of the test was considered to be 0.05.

Table 1. Demographic Variables of the Participants in the Study

The results of this study showed that 20 (20%) participants in the present study get pregnant after the study, including 11 (27.5%) spontaneously and 9 (15%) by ovulation induction. The chi-square test showed no statistically significant relationship between the type of pregnancy and the outcome of pregnancy (P = 0.126) (Table 2).

Table 3. Relationship Between the Duration of Infertility and the Success of Spontaneous Pregnancy and Ovulation Induction in the Investigated Sample

Also, Fisher's exact test showed a statistically significant relationship between the frequency of an infertility type and the success rate of spontaneous pregnancy (P-value = 0.004) (Table 4).

Table 4. Relationship Between Type of Infertility and Spontaneous Pregnancy Success in Patients

The results of the study showed a relative success in women's infertility treatment. The results of several studies on the therapeutic effects of HSG indicate a high variation of 18 - 75% in the success of pregnancy (11).

Mackey et al. (1971), in their study, reported pregnancy after six weeks in 30-50% of the patients following normal HSG (12). Generally, the success rate of pregnancy after HSG was attributed to three factors of infertility period before HSG, frequency of intercourse after HSG, and the presence/absence of concomitant treatment with HSG (11). Other factors, including the volume and type of solution, play an important role in the likelihood of success. Studies have shown that using fat-based solutions has a higher ability to open the fallopian tubes (12). Some studies have shown that the success rate of pregnancy after HSG differs in different treatment centers and populations. In other words, the role of environmental factors and polymorphism is decisive (13, 14).

Yi et al. (2012) stated that induction ovulation with HSG could be used as an initial treatment. The success rate of pregnancy is affected by the type of blockage. They stated that women with proximal tubular obstruction had better results than those with distal obstruction (16). Perhaps, the reason for the lower birth rate in women with ovulation induction than in women with spontaneous pregnancy was the difference in their tubal problems. Another important factor in the prevalence and incidence of infertility is the physical condition and body mass (BMI). Mothers with a low BMI, in addition to thinner tubes, suffer from a lack of sex hormones and infertility due to the low-fat content required for the anabolism of sex hormones. There was no statistically significant relationship between the age of patients, the type of blockage, and the outcome of pregnancy.

Ming-Hueilin et al. (2013) also found no significant association between the patient's age and the pregnancy rate after HSG (17). Age is known to be an effective factor in the success of pregnancy in many studies. It is scientifically and experimentally expected that the success of pregnancy is much higher in younger women. (18, 19). The results showed no statistically significant relationship between the success rate of spontaneous pregnancy and ovulation induction and the history of abdominal surgery. Honoré et al., in 1999, showed a high success rate of spontaneous pregnancy in women undergoing bilateral microsurgery in fallopian tubes compared to women who used the transcervical technique to open the blockage of the fallopian tube, but this difference was not significant. On the other hand, in women with unilateral microsurgery, there was no significant difference in the prevalence of pregnancy success (17). In

The authors of the current research would like to dedicate their sincere thanks to Zahedan University of Medical Sciences for providing the facilities during the current study.

Copyright © 2020, Zahedan Journal of Research in Medical Sciences. This is an open-access article distributed under the terms of the Creative Commons Attribution-NonCommercial 4.0 International License (http://creativecommons.org/licenses/by-nc/4.0/) which permits copy and redistribute the material just in noncommercial usages, provided the original work is properly cited.
download pdf 134.88 KB Get Permission (article level) Import into EndNote Import into BibTex
Number of Comments: 0