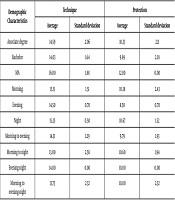 Maintaining patients’ safety is a basic professional role of radiographers. Therefore, the present study aimed to evaluate the technical, protective, and technological operation of interventional radiologists.

The current study aimed to determine the protective and technical performance of radiographers and their knowledge and expertise.

In this descriptive-analytical study, 60 radiographers working in radiology wards of hospitals affiliated to the Zahedan University are included. A checklist whose reliability and validity were previously established was used to collect data. For the radiography staff, 17 technical and 12 protective items were checked and recorded during three work shifts. Data were analyzed by SPSS.

The performance score of 27 males (45%) and 33 females (65%) was assessed. Seven factors of radiology staff, including gender, employment status, age, work experience, number of shifts, Work Shift, and Education, were evaluated, and that number of shifts was statistically significant.

The radiographers’ awareness of technical and protective principles was at a medium level. Increasing attention to the quality of academic training and continuous education is necessary.

Radiology departments have an important role in diagnosing patients’ problems. Radiographers have two main roles in taking diagnostic images and in protecting the patients against radiation. Nowadays, X-ray imaging is one of the most frequently used and developing methods for medical diagnosis, which provides necessary information for making therapeutic decisions. Although X-ray is a valuable medical tool that provides several benefits, it’s also an important source of exposure to artificial radiation (1-5). Since the consequences of exposure to ionizing radiation are well-documented, caution should be taken when using x-ray radiation, and ALARA law should be observed to minimize unnecessary radiation of both patients and personnel (6, 7). Radiographers should pay attention to a wide range of factors to perform radiography to maintain the quality of images; meanwhile, they should minimize patients’ attention to radiation (8, 9). The European Union has developed a program entitled “guidelines for quality of radiographic quality” and recommended countries to follow its guidelines. Exposure to an excessive amount of ionizing radiation may negatively influence the genes, hematopoietic cells, and central nerves (10-12). Besides, it may cause problems for the surface of the body (such as burns, cataracts, and scales) (13). Factors that contribute to the absorption rate of radiation are determined. Therefore, through careful planning, the percentage of radiography and radiation absorption should be reduced (14, 15); Increasing the awareness of radiographers about currently available guidelines for reducing the absorption of radiations has a significant influence on protecting the patients against ionizing radiation. Moreover, as knowledge forms the behaviors, unfamiliarity with safety measures may cause harmful results for both patients and radiographers. Therefore, the awareness of radiographers with safety measures is necessary to minimize exposures to radiation, which guarantees their proper functioning. The literature (e.g. Almen et al (16) and Muhogora et al. (17)) indicates that to enhance the quality of radiography images, it’s necessary to observe the principles noted in this guideline. In this regard, Krutz (18), Gogos (19), Ononugbo and Nwokeoji (20), and Almalki (21) have performed related research in this field. These studies have shown that teaching technical and protective principles could improve the performance of radiographers (18-21).

Alipoor et al. (22), Davoudian Talib et al., and Borhani and Alizadeh also acknowledged that staff performance was not optimal, and they required further education and retraining to raise their awareness (22-24).

The current study aimed to investigate the protective and technical performance of radiographers and their knowledge and expertise in this field. The statistical population of the study was all staff of radiographic centers in hospitals affiliated to the Zahedan University of Medical Sciences (ZUMS).

According to the results of this research, to raise awareness and improve the level of performance of staff, the status quo should first be investigated to provide a basis for future decisions. Therefore, the present study also aimed to determine the performance and knowledge of the staff of the radiology departments regarding the principles of radiography and hints. All protective measures were observed.

This cross-sectional descriptive-analytic study was conducted to determine the protective and technical performance of radiologists and their knowledge and expertise in this field. The statistical population was all staff working in radiology centers of hospitals affiliated to ZUMS (in total, 60 staff). To collect data on personnel performance, a checklist was used to construct a construct that contained 17 technical functions and 12 protective functions. Each performance was scored from zero or one based on the subjects’ performance. For the technical section, the total score ranges from zero to 17, and for the protective function, it ranges from zero to 12. To check the validity of this checklist, opinions of three radiographers’s were used, which was approved.

3.1. Reliability and Validity of the Questionnaire

As the checklist was anonymous, there was no ethical prohibition. Participation was voluntary, and participants were informed about the confidentiality of information. All ethical considerations were observed in the present study.

The items in the checklist were reviewed and evaluated by a radiologist in three different shifts. To measure the level of awareness of the staff about the protective and technical principles, a questionnaire comprised of 12 items that were arranged in two parts was developed. The questionnaire was filled through face-to-face interviews. Each true answer had 1 score, and an incorrect answer had a zero score; the total score ranges from zero to 12. To collect the data, the researcher was attending radiology departments without any knowledge of the personnel and recorded the performance of each of the personnel in the morning, evening, and night shifts by the checklist.

4.1. Technical and the Protective Mean Score

4.2. Evaluation of Technical and Protective Mean Score According to 7 Factors

Of 60 participants, 27 (45%) were males, and 33 (65%) were females. The results of the seven factors of radiology staff, including gender, employment status, age, work experience, number of shifts, work shift, and education, are listed in the following tables (Tables 1-3).

Table 1. Mean and Standard Deviation of the Correct Response Score of the Subjects From Radiologists’ Awareness of the Technical and Protective Principles According to the Employment Status and Gender Based on the t-test
Table 2. Relationship Between the Variables the Correct Answer of the Subjects From the Awareness of Radiographers About the Technical and Protective Principles Based on the Number of Shifts, Age and Work Experience Based on the Correlation Test

aThe number of shifts with a technical function has a significant inverse relationship.

Table 3. Mean and Standard Deviation of the Correct Response Score of the Subjects From Radiologists’ Awareness of the Technical and Protective Principles According to the Type of Educational Qualification and Work Shift Based on One-Way ANOVA

The current study aimed to investigate the knowledge and practice of personnel working in radiology departments affiliated to the ZUMS regarding the protective and technical principles. The findings indicated that the knowledge of the staff in the two investigated areas is high. As the negative consequences of exposure with ionizing radiation is well-documented, staff of radiology departments have a mean working age of about 10 years. The mean working age of personnel was 8.9 years; which indicates compliance with the radiation protection law. Also, the protection and technical principles defined for both male and female personnel were equal to published standards. This result is influenced by the project forces, which are a significant number, as well as the continuation of postgraduate studies with a long work experience, because, in recent years, Zahedan University of Medical Sciences is attracting a discontinuous radiology student Regarding the personnel performance in the technical area, the highest percentage was related to the “providing rapid services to the emergency patient” (100%), which indicates the importance given to patients in emergency situations, and the lowest percentage belonged to the “deep exhalation in simple abdominal radiography” (30%), This result can be due to the high number of patients referred to the emergency department and the importance of taking care of them and increasing the skill of the staff. For the protective part, the highest score belonged to the “closing the door when working with the tube” (96.7%), and the lowest percentage was for the “use of lead shield” (63.3%).

The intra-comparison of mean scores of protective and technical performance revealed no significant difference between males and females (Table 1); Compared to the results reported by Tavakoli et al. (25), in the present study, in the protective area, males had a better performance, while in the technical field, females had a better performance. As shown in Table 1, the employment status didn’t have a significant influence on the performance of the staff. It should be noted that about one-third of the staff were project planners, and due to up-to-date information and wing motivations for learning and absorption, they had a significant impact on the desired results.

The highest technical and protective performances were observed at night shifts (Table 3), which can be attributed to the lower workload of the staff. The present study had other findings, including higher technical performance and personnel protection among those who had less working shifts; the inverse association between the number of shifts and the efficiency of staff (27); nevertheless, no association was found between the type of the shift (i.e. morning, evening, and nights) the staffs’ performance (Tables 2 and 3).

In general, the quality of performance and knowledge of the staff was acceptable. However, as ionizing radiation is associated with increased health risks, special attention should be paid to this issue in educational programs, continuous education programs, and supervision programs. Besides, it should be noted that using protective equipment can effectively reduce the absorption rate for both patients and the staff while maintaining the quality of images. Holding seminars, training courses, and continuous education programs can effectively increase the awareness, attitudes, and practice of the staff. Which in turn results in increased use of protective measures and better performance of the staff.

We acknowledge the collaboration of hospitals affiliated to the ZUMS.

Copyright © 2020, Zahedan Journal of Research in Medical Sciences. This is an open-access article distributed under the terms of the Creative Commons Attribution-NonCommercial 4.0 International License (http://creativecommons.org/licenses/by-nc/4.0/) which permits copy and redistribute the material just in noncommercial usages, provided the original work is properly cited.
download pdf 107.21 KB Peer Review Comments ( 117.95 KB) Get Permission (article level) Import into EndNote Import into BibTex
Number of Comments: 0