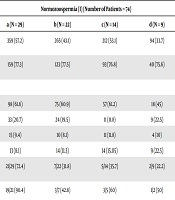 Although the detrimental effects of advancing maternal age on fertility and reproduction have been recognized, there is a controversy regarding the impact of paternal age on male fertility.

This study aimed to evaluate the effect of paternal age on assisted reproductive outcomes in infertile couples with different male infertility factors.

It was a cross-sectional study on 285 couples at Alzahra Hospital from 2017 to 2019. The exclusion criteria were couples with female factor infertility. Patients were divided into four groups of normozoospermia, oligozoospermia, asthenozoospermia, and oligoasthenoteratozoospermia based on the World Health Organization criteria. To evaluate the effect of age, another grouping was done according to the paternal age (< 25, 25 - 35, 35 - 45, and > 45 y).

Our findings showed a declining likelihood of fertility in men with advancing age. Specifically, we observed the detrimental effect of age on fertilization, embryo quality, and biochemical and clinical pregnancy rate in oligozoospermia and oligoasthenoteratozoospermia groups during intracytoplasmic sperm injection cycles.

Age is one of the most important malefactors in male fertility potential (1). There are many studies on the negative effects of elevated maternal age on reproduction, such as declined pregnancy rate, weak oocyte quality, and increased embryo aneuploidies (2). However, contradictory results have been reported about the effect of paternal age on fertility potentials such as sperm parameters and reproductive outcomes. For example, some studies reported that seminal volume, concentration, motility, and morphology of sperm were decreased with increasing paternal age (3), while others did not (4). The possible effects of male aging have been reported on assisted reproductive outcomes via sperm DNA damage (5), increasing sperm DNA methylation (6), production of excessive reactive oxygen species (7), and influence on spermatogenesis (8). Although the effect of maternal age on fertility potential is well recognized, it is more difficult to determine the effect of paternal age on fertility. Therefore, there are contradictory results about the association between paternal age and assisted reproductive technology (ART) outcomes. It has been reported that increasing paternal age has been involved in abnormal reproductive and genetic outcomes (9) and decreased live birth rates (10), while other reports have shown no association between male aging and pregnancy outcomes (11). Due to the limited number of studies, there remains no consensus on the effect of male aging on ART outcomes when Intracytoplasmic Sperm Injection (ICSI) cycles are performed.

A randomized cross-sectional study was conducted on 285 infertile couples with male factor infertility attending the Alzahra Educational and Remedial Center (IVF center) from May 2017 to February 2019. Women had a mean Body Mass Index (BMI) of 23.5 ± 4.3, normal clinical history, and maternal age < 38 years, and received the same antagonist ovarian stimulation protocol. Men with similar BMI were also included in this study. The exclusion criteria were men taking hormone medications, with diabetes, other diseases (e.g., cryptorchidism, testicular torsion, or orchitis), or/and past surgery in the reproductive system that may have influenced the semen quality. The couples with female factor infertility were also excluded from this study.

The protocol of long luteal suppression was used for controlled ovarian hyperstimulation. In this method, a GnRHa (Superfact, Ferring, Germany) combined with HMG (Menogon, Ferring, Germany) or recombinant FSH (Gonal-F, Serono, Switzerland) was used. After the observation of at least three follicles with a diameter of more than 18 mm, 10000 IU HCG (Choriomon, IBSA, Switzerland) was used to induce ovulation. The ICSI method was performed to fertilize retrieved follicles using an inverted microscope (Olympus IX70, Tokyo, Japan). Injected oocytes were cultured and incubated in a humidified atmosphere with 5% CO2 at 37°C. After 16 h - 18 h of microinjection, fertilization was assessed with the observation of two pronuclei (2PN). The grading of the 2PN zygote was performed based on the Scott et al. (14) scoring system. Also, 2 - 3 days after microinjection, the classification of the embryo was done according to the Ebner et al. (15) scoring system. In this system, the classification of the embryo was performed based on embryo morphology as follows: grade A, regular cells without fragmentation; grade B, cells with lower than 25% fragmentation; grade C, cells with fragmentation between 25 and 50%, and grade D, cells with fragmentation higher than 50%. Embryo transfer was done as intrauterine 2 - 3 days after microinjection. Biochemical and clinical pregnancy was defined as increased serum b-hCG (beta-human chorionic gonadotropin) concentration two weeks after embryo transfer (ET) and the observation of intrauterine sac with heart function four weeks after ET, respectively. The pregnancy loss spontaneously after the observation of pregnancy by ultrasound was determined as abortion.

In this study, 285 patients under in vitro fertilization ICSI cycles were assessed. The female age and BMI were 20 - 38 year-old and 23.5 ± 4.3, respectively. Primary infertility was the most common type of infertility in this study. Ejaculated spermatozoa were used in all cycles. The mean embryos transferred were 2.06 ± 0.91 (from 2 to 3) embryos.

Data obtained by basic sperm analysisfconflict and assisted reproductive outcome assessment are presented in Table 1. It can be seen that the mean BMI in men did not show any significant differences between these groups (P = 0.14). As seen in Tables 1-4, the percentage of fertilization decreased with increasing age in men with different infertility factors. According to the age, this decline was statistically significant in the men of groups Id (P = 0.01), IId (P = 0.01), IIId (P = 0.02), and IVd (P = 0.04) compared to the remaining groups of men. Aging (> 45 years) was negatively correlated with the embryo development rate in men with infertility factor of oligozoospermia (P = 0.01). The significant difference in the embryo development rate was not observed in the other groups (Tables 1 - 4). Thus, the rate of embryo development decreased in group IId (P = 0.01) compared to other groups (IIa-c). In addition, as can be seen in Tables 2 and 4, the poor embryo quality increased in oligozoospermia (grade C; P = 0.001 and grade D; P = 0.005) and oligoasthenoteratozoospermia (grade D; P = 0.01) men with advancing age. Therefore, this result shows that aging can affect the developmental potential and quality of embryo in infertile men of oligozoospermia. Male age was not associated with any of the ICSI-ET outcomes (e.g. development rate and quality of embryos) analyzed in infertile men of normozoospermia and asthenozoospermia. While the biochemical pregnancy rate (group Ia: P = 0.014) and clinical pregnancy rate (groups of Ia and IIIa: P = 0.001) increased in younger men of groups of a (Tables 1 and 3). In addition, a significant negative association was observed between clinical pregnancy and male aging in infertile men with factors of oligozoospermia (group IId: P = 0.01) and oligoasthenoteratozoospermia (group IVd: P = 0.02). The results show that paternal age can be associated with reproductive outcomes (e.g., fertilization, embryo quality, and biochemical and clinical pregnancy rate) via influencing the number and morphology of sperms (infertility factors of oligozoospermia and oligoasthenoteratozoospermia).

Table 1. Outcomes of ICSI-ET in Different Paternal Age Groups of Men with Normozoospermiaa, b

Table 2. Outcomes of ICSI-ET in Different Paternal Age Groups of Men with Oligozoospermiaa, b

Table 3. Outcomes of ICSI-ET in Different Paternal Age Groups of Men with Asthenozoospermiaa, b

Table 4. Outcomes of ICSI-ET in Different Paternal Age Groups of Men with Oligoasthenoteratozoospermiaa, b

While there are several studies about the effect of male aging on ART outcomes, to the best of our knowledge, there is no report on the effect of paternal age on ART outcomes in infertile couples with male factor infertility. Our research showed a negative relationship between paternal age and embryo quality and clinical pregnancy in couples with infertility malefactors of oligozoospermia and oligoasthenoteratozoospermia.

These findings are consistent with previous reports (22). It has been reported that the quality of semen is affected by the age of men (23). Also, higher sperm chromatin damage is known to be affected by advancing age in men (23, 24) so that the detrimental effects of sperm chromatin integrity have been reported on embryo morphology and reproductive outcomes. In addition, it may also be associated with embryo implantation failure or spontaneous miscarriage (25).

In conclusion, the effect of advancing age in men was observed on assisted reproductive outcomes in specific factors of infertility (e.g., oligozoospermia and oligoasthenoteratozoospermia). This may construe that the paternal age via affecting sperm parameters (e.g., concentration and morphology) can substantially affect fertility potential in men. Future research needs to include larger populations and longer follow-ups.

Copyright © 2020, Zahedan Journal of Research in Medical Sciences. This is an open-access article distributed under the terms of the Creative Commons Attribution-NonCommercial 4.0 International License (http://creativecommons.org/licenses/by-nc/4.0/) which permits copy and redistribute the material just in noncommercial usages, provided the original work is properly cited.
download pdf 108.56 KB Peer Review Comments ( 99.77 KB) Get Permission (article level) Import into EndNote Import into BibTex
Number of Comments: 0