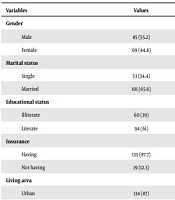 Health-Related Quality of Life and Death Anxiety Among Hemodialysis Patients

Hemodialysis improves renal function and increases lifetime. However, it causes a fundamental change in the whole life of patients. Many of these patients express their fears of an unacceptable life.

This study aimed to evaluate the quality of life and death anxiety among patients on hemodialysis and determine their personality and demographic predictors.

A total of 154 participants were recruited from the hemodialysis units of hospitals in Zahedan, the southeast of Iran. The participants completed the World Health Organization Quality of Life Brief Scale, Revised NEO Personality Inventory, and Templar's Death Anxiety Scale.

Personality is an essential factor in predicting health-related quality of life and death anxiety. This result provides a better understanding of the determinants of death anxiety and HQOL.

Hemodialysis is one of the effective interventions for patients with chronic renal failure (CRF), which can improve their renal function and increase their lifetime. However, hemodialysis involves procedures that require to visit a hospital or dialysis center, usually two or three times a week, which causes a fundamental change in the whole life of patients (1). Patients on hemodialysis usually experience physical dysfunction, increased cardiovascular disease, fatigue, sleep disorders, cognitive disability, social effectivity, and psychological conditions, like depression and anxiety, which can cause a poor quality of life (2-4).

The World Health Organization defines the quality of life as “individuals’ perception in the context of their culture and value systems in which they live and in relation to their goals, expectations, standards, and concerns. It is a broad-ranging concept affected in a complex way by the person’s physical health, psychological state, level of independence, social relationships, personal beliefs, and their relationship to salient features of their environment” (5).

Health-related Quality of Life (HRQL) is a well-known measure in research for both somatic and mental disorders that considers the patient’s difficulties relating to the disease (6). However, two patients with the same condition may report different HRQL scores because it is a subjective evaluation and may be affected by other factors. On the other hand, personality is a relatively stable tendency of a person to perform in a specific style in various conditions. Differences in personality traits can affect the coping strategies and responses to stressful events like disease, so it can be logical to assume personality as a possible determinant of the quality of life of hemodialysis patients (7-9).

Anxiety is a common emotion defined by feelings of worry, insecurity, tension, and expectation of future danger. Death anxiety is one of the various anxiety types. Death anxiety is a permanent personality characteristic relating to negative views and cognitions about death (10). Although hemodialysis increases the lifetime, the prolonged life is not just the matter, but it is about the quality and worthwhileness of life. Patients with renal failure are afraid that their lives will be shortened by an early death. In contrast, there are other patients that express their fears of an unacceptable life. Death anxiety joined with a fear of life, is the dilemma of patients with chronic renal failure (11).

The current study aimed to evaluate the quality of life and death anxiety among patients on hemodialysis and determine their personality and demographic predictors.

This cross-sectional study was conducted in 2019. The participants were recruited from the hemodialysis units of Ali‐Ebne‐Abitaleb and Khatam hospitals in Zahedan, the southeast of Iran. A total of 154 patients participated in this study, and completed a set of self-reported questionnaires. All patients' records were kept confidential.

The inclusion criteria were being in a hemodialysis program, age over 15, not having another chronic disease, and having an Iranian nationality. Patients who did not have Iranian nationality, were substance abusers, were using medications that affected their mood, and had a history of major psychiatric disorders and death in the family due to kidney disease were excluded from the study.

The World Health Organization Quality of Life Brief Scale (WHOQOL-BREF) is a 26-item self-report tool with a Likert scale (five points) that assesses the individual's overall perception of the quality of life and its four domains. Domain one is related to mental health, domain two to physical health, domain three to environmental health, and domain four to social relationships. Higher scores reflect better quality of life (12). The validity of the Persian version is 0.77 and 0.73 (13).

The Revised NEO Personality Inventory (NEO-PI-R) is a 60-item self-report that is used to assess the five traits of personality, including openness, conscientiousness, extraversion, agreeableness, and neuroticism. Each trait is measured with 12 items on a five-point Likert scale from completely disagree (0) to completely agree (4) (14). The validity of the Persian version is between 0.75 and 0.83, and the reliability is between 0.56 and 0.87 (15).

Templer's Death Anxiety Scale (DAS) is mostly used in its title and measures death-related anxiety. This scale consists of 15 questions (yes/no). The scores range from zero to 15, and a higher score (above average eight) represents a higher degree of death anxiety (10). The validity and reliability of the Persian version are 0.68 and 0.83, respectively (16).

After collecting data, they entered into SPSS (ver. 22) software. First, the data quality was carefully evaluated. Statistical analysis was done using Pearson correlation between quantitative variables. Finally, the relationship between each variable and QOL and death anxiety was calculated, and relations with P values under 0.2 were entered into a backward multiple regression model to determine the predictors of death anxiety and quality of life.

Table 2. Results of Pearson's Correlation (Bivariate) Analysis of Variables a, b, c

a Data in the table is showing the correlation coefficient.

b Correlation is significant at the 0.01 level.

c Correlation is significant at the 0.05 level.

4.3. Regression Analysis for Predictors of QOL and Death Anxiety

Table 3. Results of Backward Linear Regression Model for Predictors of Quality of Life and Death Anxiety

The first objective of this study was to evaluate the quality of life and death anxiety in hemodialysis patients. After assessing 154 participants, the results showed that 60.4% of the patients had high levels of death anxiety. About 70% of the patients had low or moderate levels of QOL, and among its four domains, physical and psychological domains showed more reductions.

Among demographic factors, being a male was a better predictor of environmental health-related QOL, which is similar to other studies on hemodialysis patients (17). Males have more opportunities for outing and gathering with friends, which is a supportive factor for them to face challenges of their disease (18). Furthermore, in the current study, lower age was a predictor of higher psychological, physical, and social relationships health-related QOL, which is similar to a study by Liu that evaluated 6,908 dialysis patients and showed higher age and being a female were risk factors for poor QOL of patients on hemodialysis (19).

In the current study, neuroticism was a predictor of all four domains of QOL. Neuroticism is a personality trait on the NEO PI-R, including an inclination to experience mental distress and negative mood. Other elements of the neuroticism trait consist of anxiety, impulsiveness, self-consciousness, depression, anger-hostility, and vulnerability to stress (20). People with a higher score in this trait have greater vulnerability for experiencing negative emotions, and it is associated with higher symptoms awareness (21). There is a reciprocal connection between neuroticism and coping, with an independent impact on physical and mental health QOL (22). Patients on hemodialysis are faced with changes in their lives, and they must adjust with dependency on treatment. However, high neuroticism can disrupt the ability to improving life goals as a response to an unchangeable event. Therefore, patients who are more neurotic experience more difficult to adjust themselves. On the other hand, lower neuroticism is associated with higher health-related QOL (23).

From the neuroscience perspective, higher scores in neuroticism are correlated with brain abnormalities like volume loss and hypermetabolism in the ventromedial prefrontal cortex, amygdala, and hippocampus (24-26). In the current study, neuroticism was a predictor of all four domains of QOL. In line with our result, a study by Poppe et al. on patients who suffered from chronic renal dresses for more than 10 years showed that neuroticism was negatively associated with psychological health-related QOL (23). Prihodova et al. also studied 177 kidney transplant recipients and showed higher psychological health-related QOL associated with lower neuroticism (27).

Extraversion is one of the most critical personality traits, referred to as "sociability, activity, assertiveness, and positive emotionality”, which means specific affection on participation in physical, cognition, and social activities (31). As confirmation for this finding, our study showed extraversion could be a predictor of mental HQL, physical HQL, and social relationship HQL, as well as death anxiety. In contrast to individuals with higher neuroticism, extraverted people tended to engage in more active coping strategies and liked the external stimulation. In the current study, higher extraversion was linked with higher QOL in psychological and physical domains. It is possible that they more easily distract from their diseases (32). This finding is in line with the results of previous studies. Higher levels of extraversion were linked to better health outcomes (27, 33). Furthermore, a study on patients who recently gave kidney transplants showed that higher extraversion was associated with better psychological health-related QOL (27).

Conscientiousness, as measured by the NEO-PI, reveals a person's tendency for self-discipline and achievement. Conscientiousness also predicted all domains of QOL, except for the physical domain, but agreeableness predicted only social relationship health-related QOL. This relation may not directly influence the QOL. However, it can be associated with treatment adherence that leads the patients to better QOL (32). Conscientiousness has been confirmed to be an influential predictor of performance (34). The role of this trait has been shown in recent studies on other chronic diseases (35-37). Similarly, another study showed agreeableness and consciousness had a positive association with quality of life (38).

The current study has some limitations. First, the sample size was small. Second, this study was cross-sectional, so the impact of personality traits on the outcome of the disease was unclear. Third, the personality traits were not reliable predictors of death anxiety, so possible predictors like religious beliefs and spirituality must be considered in future studies. Fourth, as the results showed, higher income was a predictor of QOL, but although most of the subjects of this study had economic problems, this factor must be moderated in future studies.

The results of the current study showed the importance of personality traits in chronic disease. These findings can be a guideline for health staff that works with these patients to recognize vulnerable patients to predict and control the possible problems that may affect the treatment course of them.

The current study was supported by Zahedan University of Medical Science (ZAUMS).

Copyright © 2021, Zahedan Journal of Research in Medical Sciences. This is an open-access article distributed under the terms of the Creative Commons Attribution-NonCommercial 4.0 International License (http://creativecommons.org/licenses/by-nc/4.0/) which permits copy and redistribute the material just in noncommercial usages, provided the original work is properly cited.
download pdf 122.77 KB Get Permission (article level) Import into EndNote Import into BibTex
Number of Comments: 0