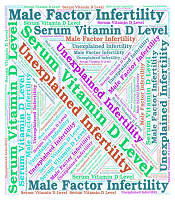 A high prevalence of vitamin D deficiency exists in Iranian people. Vitamin D plays a significant role in the pathogenesis of infertility.

This study aimed to compare the serum levels of vitamin D in women with unexplained and male factor infertility admitted to the Infertility Center of the Ali ibn-e Abitaleb Hospital, Zahedan, Iran, in 2018.

This case-control study was performed on 155 women in two groups: a case group consisting of 105 women with unexplained infertility and a control group consisting of 50 women with male factor infertility admitted to the Ali ibn-e Abitaleb Hospital. Blood samples were taken from all the subjects and sent to the laboratory to determine the vitamin D level. Descriptive statistics, including frequency, percentage, mean, and standard deviation were used to describe the data. Also, the mean serum vitamin D level was determined using an independent t-test and the Mann-Whitney U test, and the rate of P < 0.05 was considered significant.

Infertility is defined as lack of pregnancy after one year of sexual intercourse without contraception. Infertility is one of the common problems of human societies, with 60 to 80 million couples suffering from it worldwide, according to WHO estimates (1). Various studies in different societies have examined the incidence of infertility and have reported different outcomes; the rate of infertility is 35% in Sheffield, 35% in China, 12.5% in Tehran, 2.3% in Isfahan Province, 6.8% in Hormozgan and 2.2% in Kerman. The relative prevalence of infertility etiologies is between 25 - 40% for male factor, 40 - 55% for women factors, about 10% for both men and women (Mixed), and about 10% for unexplained infertility. The approximate prevalence of infertility causes in women is 40 - 30% of ovulatory disorder, 30 - 40% of peritoneal or tubular factors, 10 - 15% unexplained, and in 10 - 15% are mixed (2, 3).

This study aimed to compare serum vitamin D levels in women with unexplained infertility and male factor infertility admitted to the Infertility Center of the Ali ibn-e Abitalib Hospital, Zahedan, in 2017.

This case-control study was performed on two groups of infertile women. The case group included all women with primary unexplained infertility, and the control group included women with male factor infertility admitted to the Infertility Center of Ali ibn-e Abitaleb Hospital, Zahedan, in 2017. The control group underwent a complete ultrasound examination, hysterosalpingography and other hormonal evaluations that have been associated with infertility due to male factor. In the case group, semen analysis was normal. Exclusion criteria also included: PCOS (polycystic ovarian syndrome), the use of vitamin supplements in the last three months hormonal disorders and uterine structural disorders. The size of sample was considered 155 patients based on similar studies. The sampling method was also easy and available. For data collection, the checklist and Para clinical results were used for each couple, the researcher referred to Ali ibn-e Abitaleb Hospital with an informational form containing demographic characteristics of the patients. After clarifying the study conditions for the patients and obtaining informed consent, they were included in the study. Laboratory scientists took 2 cc blood samples from all the subjects and sent the samples to the hospital laboratory to determine the vitamin D level.

The vitamin D level was measured with the ELISA Test Kit of 25 OH Vitamin D (Pishgaman). Vitamin D deficiency (less than 15 ng/mL), insufficiency (15-30 ng/mL), and adequacy (30-100 ng/mL) were considered. The obtained data and the vitamin D level were entered into the information form and analyzed using SPSS software. Descriptive statistics, including frequency, percentage, mean, and standard deviation, were used to describe the data. Also, to compare mean serum vitamin D levels, an independent t-test was used; otherwise, the Mann-Whitney U test was used. The value of P < 0.05 was considered significant. Sampling from both groups was done in the same seasons to eliminate the season's effect as a confounding factor. Also, the studied groups were homogenized in terms of age and the body mass index (BMI).

This study, 105 infertile women with unexplained cause and 50 male factor were examined. According to the results in the case group (unexplained infertility), the mean level of vitamin D was 10.90 ± 7. 11 ng / mL, that indicates a deficiency of vitamin D among women with infertility due to unexplained cause. In fact, this level of vitamin D could lead to disorders such as a mother's immune deficiency and other problems for mother or her child (15). Therefore, it appears to be necessary to take vitamin D supplements. Behbahani et al. (15) reported that 52.78% of infertile women were diagnosed with vitamin D deficiency. In the studies of Garbedian et al. (11) and Rudick et al. (16), the vitamin D deficiency rate was 54.9% and 58% in females, respectively, which is consistent with our research. Our study also found that the mean vitamin D level was 23.66 ± 6.88 ng/ml in the control group (male factor infertility).

We would like to thank all the distinguished professors, colleagues, and patients who collaborated to implement this project.

Copyright © 2021, Zahedan Journal of Research in Medical Sciences. This is an open-access article distributed under the terms of the Creative Commons Attribution-NonCommercial 4.0 International License (http://creativecommons.org/licenses/by-nc/4.0/) which permits copy and redistribute the material just in noncommercial usages, provided the original work is properly cited.
download pdf 104.55 KB Get Permission (article level) Import into EndNote Import into BibTex
Number of Comments: 0