2 Institute of Biochemistry and Biophysics, University of Tehran, Tehran, Iran 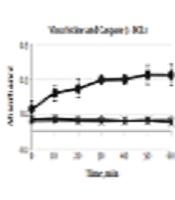 Most anti-cancer drugs target mitosis and induce apoptosis in cancerous cells. In the immune system, proliferation and apoptosis of lymphocytes are indeed essential modulating elements.

In this study, we have investigated the effect of vincristine on normal resting and normal proliferating lymphocytes comparing with cancerous cells.

The results suggesting that vincristine may induce internal pathways of apoptosis in normal and cancerous cells while extrinsic pathway was induced in cancerous cells. On the other hand, the effects are highly dependent on the activation status of normal cells, and affirms that responding immune cells should be more seriously noticed when side effects of anticancer drugs are estimated.

Vincristine, as a key drug for the treatment lymphoid malignancies. belongs to Vinca alkaloids - the second-most-used class of cancer drugs. It was widely used as a potent chemotherapeutic agent in the treatment of various cancers such as lymphoma; however, it has common side effects including nausea, vomiting, weight loss, diarrhea, bloating, mouth sores, dizziness, headache, hair loss, and also neutropenia and peripheral neuropathy (1-3).

Many anti-cancer chemotherapy drugs target mitosis, hence induce apoptosis in cancerous cells, such as vincristine, which induces mitotic arrest as a microtubule inhibitor (4, 5). Therefore, cells undergo more apoptosis when they are more dividing. However, many studies regarding the effects of vincristine may notice only normal resting lymphocytes e.g. peripheral blood mononuclear cells, so the effect on normal activated lymphocytes remains unseen whereas these normal proliferating cells may be more susceptible to cytotoxic effects of the drug. It is noteworthy to consider that proliferation and apoptosis of lymphocytes are essential parts of the immune modulation and apoptosis induction by chemotherapy drugs include the normal proliferating lymphocytes responsive to malignancies or other invaders.

Caspases (cysteine-dependent asparagine-oriented protease) are the main players in apoptosis. Two distinct yet interconnected signaling pathways control apoptosis by activating caspases. The intrinsic apoptotic pathway engages caspase 9 via members of the BCL-2 protein family and the mitochondria in reaction to severe cellular damage or stress and is mediated by a multimeric adaptor complex known as the Apaf-1 apoptosome (6). The extrinsic pathway however usually activates caspase 8 via cell-surface death receptors (7). The activation of caspase 8 may lead to caspase 9 activation as well (8, 9). Caspase 8 has anti-tumor roles, and increased levels of caspase 3 in tumor cells induce apoptosis (10, 11).

The aim of this study is to evaluate the effect of vincristine on the activity of main apoptotic caspases (3, 8 and 9) in resting and proliferating lymphocytes and cancerous lymphoma cell line (B cell lymphoma BCL1).

The spleen of 8 - 10-weeks BALB/c mice was removed under sterile conditions and the splenocytes separated as cell suspension and centrifuged, then resuspended in 2 mL Tris-buffered (0.2%) ammonium chloride (0.83%) and incubated for 2 minutes at room temperature to remove red blood cells. Immediately after that, 2 mL of fetal bovine serum (FCS) (Gibco) was added, centrifuged at 300 g for 10 minutes, and washed twice with RPMI medium (Gibco). Cell viability, as determined by the Trypan blue exclusion method, exceeded 95%. The cells were resuspended in 10% FCS RPMI medium and cultured in 96-well microplates at 2 × 105 cells per well.

Vincristine, at various concentrations (3.7, 5, 10 and 20 µg/mL depending on work design), were added with or without 25 µg/mL concanavalin A (Con A) as a lymphocyte stimulator (5 wells were assigned for each condition) and incubated for 48 hours at 37°C, 5% CO2.

BCL1 cells were purchased from the Pasteur Institute Cell Bank (Tehran, Iran, code C551). The cells were cultured and passaged at 37°C, 5% CO2 in 10% FCS supplemented RPMI1640 Medium. 2 × 104 cells were added to each well of the 96-well microplate and cultured overnight, then, the supernatants were removed and the desired concentrations of vincristine were added (5 wells for each condition) and incubated for 48 hours at 37°C, 5% CO2.

Briefly, after treatment with desired doses of vincristine for a specific time period (48 hours), the cells were washed and then lysed in a lysis buffer composed of 20 mM PIPES (piperazine-N, N’-bis (2-ethanesulfonic acid)), 10 mM KCl (potassium chloride), 2 mM MgCl2 (magnesium chloride), 4 mM DTT (Dithiothreitol), pH 7.4 and 20 µL antiprotease PMSF (phenylmethylsulfonyl fluoride, and 1 µL leupeptin were added per 1 mL of lysing buffer). To obtain total protein of each sample, 100 µL of this cocktail was added to each 106 splenocytes or 105 BCL1 and incubated on ice for 30 minutes. Then, the cells were passed from an insulin syringe 10 times and the Lysates were clarified by centrifugation at 3500 g (4°C) for 15 minutes. The supernatants were collected and froze at -70°C and the total protein of each sample was determined by the Bradford Method (14).

The caspase activity was assessed using specific colorimetric substrates labeled with the chromophore p-nitroaniline (pNA). Fifty µL of the cell lysates was mixed with 50 µL of caspase assay buffer composed of 100 mM NaCl (sodium chloride), 50 mM Hepes (N-2-hydroxyethylpiperazine-N’-2-ethanesulfonic acid), 0.1% CHAPS (3- ((3-Cholamidopropyl) dimethylammonio)-1-propanesulfonic acid), 0.1 mM EDTA (ethylene diamine tetraacetic acid), 10 mM DTT, in 10% Glycer, pH = 7.4ol), 5 µL of caspase 3 substrate DEVD-pNA (N-Acetyl-Asp-Glu-Val-Asp p-nitroanilide) was added and incubated at 37°C for 4 hours. Hydrolysis of DEVD-pNA by caspase 3 released free pNA that produces a yellow color detectable at 405 nm. The cleavage of the peptide substrate was monitored at 405 nm using a 96-well microplate reader at time intervals of 10 minutes. The same protocol performed for Caspase -9 but the specific substrate replaced by LEHD-pNA (N-Acetyl-Leu-Glu-His-Asp p-nitroanilide). caspase assay buffer for caspase 8 was a little different (100 mM NaCl, 50 mM Hepes, 0.1% CHAPS, 0.5 mM EDTA, BSA 0.05 %, 1 mM DTT, in 10% Glycer, pH = 7.4ol) and IETD-pNA (N-Acetyl-Ile-Glu-Thr-Asp-p-nitroanilide) was used as a specific substrate (15). Supernatants of untreated cells were considered as a negative control. Control 1 (without substrate) and control 2 (without supernatant) were included as well. Caspase activity was measured using a standard curve with known concentrations of specific substrate, and the activity according to µmol/min/mg protein was calculated whenever necessary. The experiments were conducted on three independent samples of cultured cells.

Statistical differences were assessed by the ANOVA (analysis of variance) and Tukey’s post hoc test and P < 0.05 was considered statistically significant. Figure 1. 2 × 104 BCL1 cells were incubated with vincristine at 5 µg/mL for 48 hours, then, cell lysates were prepared and colorimetric assay of caspase activity was performed using DEVD-pNA for caspase 3 (A), IETD-pNAfor caspase 8 (B), and LEHD-pNA for caspase 9 (C) as a substrate. The absorbance was read at 10 min intervals. Supernatants of untreated cells were (without Vincristine) considered as a negative control, the sample without substrate was designed as “control 1” and without supernatant as “control 2”. The results are presented as mean ± SD (very low SD in some experiments makes the bars hardly visible) and the activity of caspases 3, 8, and 9 in BCL1 lymphoma cell line is shown as µmol/min/mg protein (table).

As shown in Figure 2, vincristine at 5 µg/mL induced a low-level activation of Caspase 9 in normal resting lymphocytes (from mouse spleen), but no activity of caspase 8 and capase-3 was observed. Figure 2. Vincristine at 5 µg/mL were added to 2 × 105 splenocytes and cultured for 48 hours, cell lysates prepared and caspase activity was assayed colorimetric using DEVD-pNA for caspase 3 (A), IETD-pNA for caspase 8 (B), and LEHD-pNA for caspase 9 (C) as a substrate. The absorbance was read at 10 min intervals. Supernatants of untreated cells (without Vincristine) were considered as a negative control, the sample without substrate designed as “control 1” and without supernatant as “control 2”. The results are presented as mean ± SD (very low SD in some experiments makes the bars hardly visible) and the activity of caspases 3, 8, and 9 in BCL1 lymphoma cell line is shown as a µmol/min/mg protein (table).

As shown in Figure 3, in normal proliferating lymphocytes, vincristine at 5 µg/mL induced both caspase 3 and caspase 9 activity, but not caspase 8. Figure 3. Vincristine at 5 µg/mL added to 2 × 105 ConA-stimulated splenocytes and cultured for 48 hours, cell lysates prepared and caspase activity was assayed colorimetric using DEVD-pNA for caspase 3 (A), IETD-pNA for caspase 8 (B), and LEHD-pNA for caspase 9 (C) as a substrate. The absorbance was read at 10 min intervals. Supernatants of untreated cells (without vincristine) was considered as a negative control, the sample without substrate designed as “control 1” and without supernatant as “control 2”. The results are presented as mean ± SD (very low SD in some experiments makes the bars hardly visible) and the activity of caspases 3, 8, and 9 in BCL1 lymphoma cell line is shown as µmol/min/mg protein (table).

Vincristine at higher concentrations (8.5 and 20 µg/mL) had no observable effect on caspase 8 activity, however, it significantly augmented the activity of caspase 9 and caspase 3 (table of Figure 3). The highest level of caspase activity has been observed in caspase 9 activity when vincristine was administered at 20 µg/mL (23.81 ± 0.02 µmol/min/mg protein).

A comparison between the effect of vincristine (5 µg/mL) on various caspases (3, 8, and 9) and various cells (cancerous BCL1, normal resting and activated lymphocytes) is presented in Figure 4A . The activity of caspase 3 and 9 in activated lymphocytes is clearly comparable with BCL1 cells, although resting cells have no caspase 3 activity and caspase 8 activity is seen only in BCL1. As shown in Figure 4B, caspases 3 and 9 are activated at higher concentrations (20 µg/mL) both in resting and stimulated cells, although the activity is about twice in activated cells. Figure 4. Comparing the activation of caspases with vincristine at 5 µg/mL (A) or 20 µg/mL (B) administered in vitro. Briefly 2 × 104 BCL1 or 2 × 105 splenocytes resting or stimulated (with ConA) were cultured at the presence or absence of vincristine for 48 hours; cell lysates were prepared and caspase activity was assayed colorimetrically and the caspase activity was calculated using standard curves (fold increase according to resting lymphocytes at 5 µg/mL vincristine).

Apoptosis induction is one of the important mechanisms regarding cancer therapy (16). Vincristine bind to β-tubulin close to the guanosine triphosphate (GTP)-binding sites (the vinca domain) at the β-α-tubulin heterodimers (17). Prolonged mitotic arrest leads to phosphorylation-mediated inactivation of BCL-2 and BCL-XL. Inactivation of antiapoptotic BCL-2 proteins promotes activation of BAX (BCL2-associated X protein) and BAK (Bcl-2 homologous antagonist killer), cleavage of caspase-9 and -3 and caspase-dependent apoptosis (18). It induces distinct death programs in primary ALL cells depending on cell-cycle phase, and cells in G1 are particularly susceptible to perturbation of interphase microtubules (19). Pharmacokinetic studies of vincristine in patients with cancer have shown variable characteristics (few minutes to hundred hours in serum) and also neurotoxic side effects. It is able to accumulate a few hundred times more than extracellular concentrations (20-23).

Apoptosis and proliferation in lymphocytes are among the most important features of the immune system (24, 25). Lymphocytes in response to invaders (including malignancies) start to proliferate before any effector function (26, 27). Therefore, anti-tumor drugs may affect normal proliferating lymphocytes much more than normal resting lymphocytes, however, these normal resting cells from the peripheral blood are usually used to study the adverse effect of vincristine on lymphocytes (28, 29). Thus, evaluating the effect of an anti-tumor drug (especially anti-lymphoma) on activated normal lymphocytes could be informative.

According to our results, vincristine (5 µg/mL) induces the activity of both caspase 8 and 9 (and caspase 3) in BCL1 cell line. These results are in agreement with various studies reporting that vincristine induces caspase 3 (or 7) and caspase 8 activation in various cell lines (30-33) and promoted the expression of caspase-9 (and caspase-3) in human neuroblastoma cells (34).

It is noteworthy that lower concentration causes gently increase in the activity of caspases 8 and 9 in BCL1 cell line but did not results in caspase 3 activation immediately. It may be due to weak activation of caspases unable to lead to reach the threshold to activate caspase 3 (35). There is an in vitro study that shows that increased cytotoxicity with alterations in G1 and S cell cycle phases may occur without detectable differences in apoptosis (36).

Regarding the importance of lymphocytes (and their proliferation), in response to various pathogens and also tumor cells, paying attention to the activation status of these cells leads to more admissible results.

We thank our colleagues from Institute of Biochemistry and Biophysics, University of Tehran for their assistance especially with caspase activity assays.